Drosophila S2 cells and cultured neurons are great systems for imaging of motor-driven organelle transport in vivo. Here we describe detailed protocols for culturing both cell types, their imaging and analysis of transport.

Drosophila S2 cells have gained increasing popularity for studying many cellular processes. These cells were originally obtained from trypsinized late stage embryos of OregonR Drosophila melanogaster and maintain macrophage-like features1. Drosophila S2 cells offer many advantages over other cell lines. They are cultured at 25 °C without CO2, and can be imaged for many hours at room temperature without the need of heating or gas exchange. More importantly, Drosophila S2 cells are very sensitive to RNAi treatment allowing high efficiency knockdown of proteins of interest. S2 cells are highly transfectable and stable cell lines can be selected in less than four weeks to allow stable ectopic expression of proteins of interest. S2 cells normally grow either loosely attached but not spread on a flask or in suspension. They can be induced to spread on coverslips precoated with a plant lectin concanavalin A (ConA). The periphery of the spread cells is especially thin and therefore is ideal for live cell microscopy. Detailed protocols for S2 cells culture, RNAi treatment, live light imaging and immunostaining can be found in the literature2,3. Our lab has adopted S2 cells as a model system to study microtubule-based cargo transport. Drosophila S2 cells treated with any drug that depolymerizes or severs F-actin, such as cytochalasin D (CytoD), grow long processes filled with uniformly polarized microtubules4-10, which makes it an ideal system to study cargo movement along microtubule arrays. Different parameters of transport in these processes (i.e. trajectories lengths, velocities, directionality etc.) can be easily measured using automated particle-tracking software, DiaTrack (Semasopht: http://www.microscopy.info/Organization/Details/4423; Dr. Pascal Vallotton: http://www.csiro.au/en/Organisation-Structure/Divisions/Mathematics-Informatics-and-Statistics/PascalVallotton.aspx#a4). These properties make S2 cells an appealing system for studying cargo transport along microtubules in tissue culture cells.

Pilot experiments in S2 cells can be extended to a physiologically important model of cargo transport studies in Drosophila primary neurons. Similar to S2 cells, neurons cultured from dissociated embryos are permeable to small molecules such as dyes and inhibitors, and high-resolution live imaging of organelle transport can be performed in neurons at room temperature. Using Drosophila with different genetic backgrounds, we can examine gene function in primary neurons by knockout (genetic loss-of-function mutations), knockdown (dsRNA injection or expression) or ectopic expression (transgenic flies). Specifically, fragmentation of actin filaments using CytoD treatment does not prevent neurite outgrowth; instead they grow faster, and thus we can study microtubule-dependent organelle transport in CytoD-treated neurons without the influence of actin filaments11. Therefore, primary neuronal cultures combine the advantages of tissue culture cells and fly genetics, which makes it a great system to study cargo transport in a physiological relevant system10,12. Since several familial neurodegenerative diseases could be caused by or associated with cargo transport defects (e.g. Parkinson's disease13, Huntington's disease14, Alzheimer's Disease15,16, Amyotrophic Lateral Sclerosis/ALS17, HMN7B and Perry syndrome18,19, and Spinocerebellar ataxia type 5/SCA520), primary neuronal cultures can be useful in analysis of the effects of specific mutations causing these diseases on microtubule-dependent transport.

Finally, important properties of microtubule-dependent transport are well conserved between mammals and flies, but Drosophila genetic and cell culture is less expensive and time-consuming, justifying the use of cultured Drosophila cells for studying essential aspects of organelle transport in normal and pathological conditions.

Drosophila S2 cells attached on the ConA-coated coverslip spread into a flat round “pancake” shape (Figures 1A and 1C). However, when S2 cells plated on coverslips in the presence of CytoD and allowed to spread for 2-3 hr, they form long thin processes filled by parallel microtubules (Figures 1B and 1D). These microtubules have uniform polarity with plus-ends out7. Time-lapse fluorescence imaging of Drosophila S2 stably expressing mCherry-tubulin shows that processes are very dynamic, especially during the first 60 min after attachment (Figure 2). After 1 hr incubation, their growth slows down and 2-3 hr incubation ensures that majority of cells have fully grown processes. Here we show two representative examples of organelle transport along microtubules in S2 cells, lysosomes (labeled with LysoTracker, 200 nM; Figures 3A-B) and peroxisomes (labeled with peroxisome-targeted GFP, GFP-SKL)7 (stable transfection with pAC-GFP-SKL; Figures 3D-E). Time-lapse images of the cells were taken every 1 sec for 61 frames using a Nikon TU-2000 inverted microscope equipped with a Perfect Focus system (Nikon) and Coolsnap CCD camera (Roper Scientific) driven by Metamorph software. A 100-W halogen light source was used for fluorescence excitation to minimize photobleaching and phototoxicity. Each of the 61 frames in sequence was color coded according to the bar at upper right and images were superimposed to generate color-coded tracks. Thus moving particles generated rainbow tracks, while stationary particles appeared white10. ImageJ plug-in Temporal Color-Code (http://fiji.sc/Temporal-Color_Code) was used for this processing. For quantitative analysis of organelle movement we used DiaTrack software (Semasopht Inc.), we only select organelles that are localized in processes because they can be easily tracked and the polarity of microtubule tracks is known. Figures 3C and 3F show typical distributions of retrograde and anterograde velocities obtained by lysosomes and peroxisomes tracking, respectively.

Similar techniques are used in our lab for analysis of organelle transport in primary cultured neurons. Neurons are a predominant cell type in mixed cultures obtained from stage 9-11 embryos. After overnight culturing they are easy to recognize by characteristic cell shape with neurites that are over 50 µm long (Figure 4A). These cells are also positive for the pan-neuronal marker, Elav21 (Figures 4B and 4B'). Processes in the neurons are filled with microtubules (Figures 4B and 4B"). We can track organelle transport along the neurites using the techniques described above for S2 cells. Mitochondria can be labeled with mitochondrial GFP (Mito-GFP) under control of a motor neuron-specific promoter D4222 (Figures 5A and 5A'), and peroxisomes can be marked by injection of DNA encoding a peroxisome-targeted mCherry7, into syncytial blastoderm stage embryos (Figures 5B and 5B'). 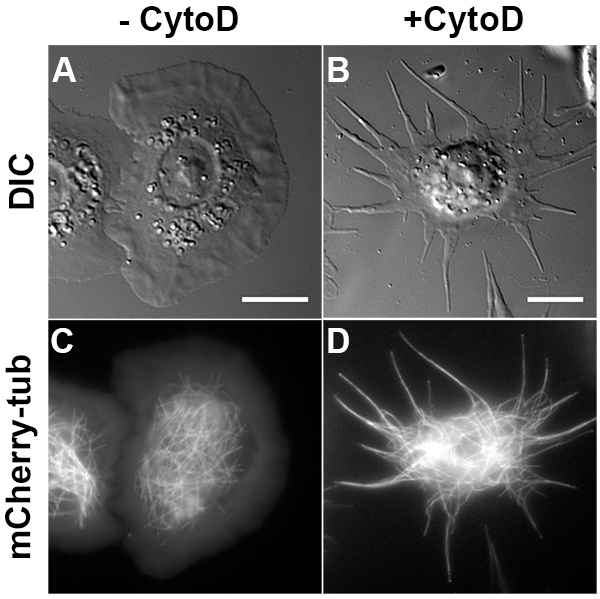 Figure 2. Time lapse of processes growth in a Drosophila S2 cell. Fluorescence time-lapse of a Drosophila S2 cell expressing mCherry-tubulin in the presence of 2.5 µM CytoD. The numbers indicate the time after the cell attach to the coverslip. Scale bar, 5 µm. Click here to view larger image. 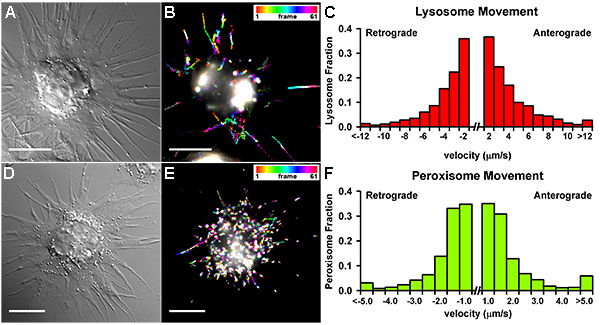 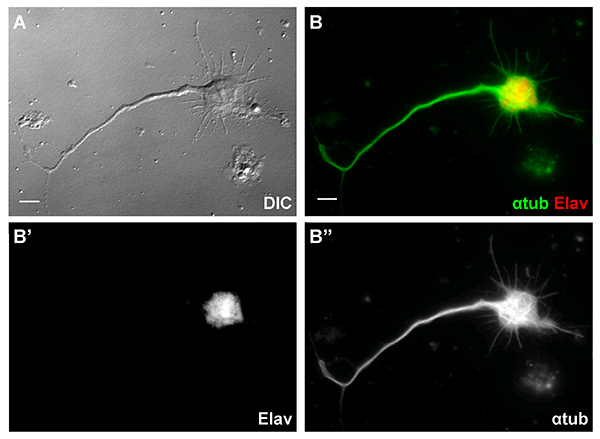 Figure 4. Primary Drosophila neurons from overnight culture. (A) An overnight cultured Drosophila neuron has characteristic neuronal morphology with long neurites. (B) The neuron expressed a pan-neuronal marker, Elav (red in B and white in B', DSHB, 7E8A10, 1:100) and with long neurites filled with microtubules (green in B and white in B'', DM1α, 1:1000). Scale Bar, 5 µm. Click here to view larger image. 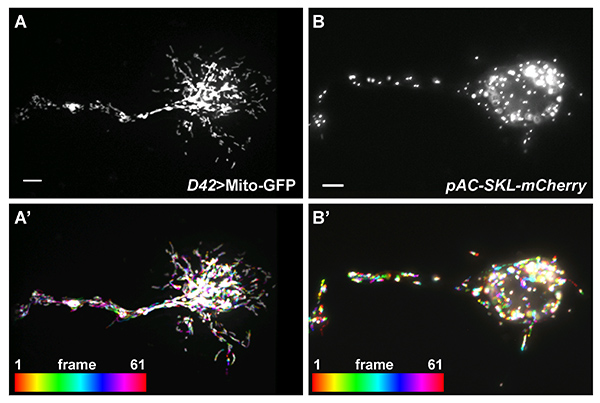 This table summarizes the most common organelle labeling strategies in tissue culture cells, including labeling of peroxisomes, mitochondria, and lysosomes.

Two strategies are typically used to label organelles: transfection of vectors encoding a fluorescent protein with an organelle-targeting sequence or staining with fluorescent dyes added directly to cultures. Common examples of cargo labels are listed in Table 1. Transient transfection or RNAi treatments of Drosophila S2 cells if necessary is performed in suspension4,6,7,9,10 before cells are plated on coverslips for imaging.

In order to get reliable results in S2 cell experiments, it is important to keep the following points in mind:

In this protocol, you may need to pay attentions to several key steps listed below:

We thank the members of the Gelfand lab who contributed to the development of these protocols. Research reported in this publication was supported by the National Institute of General Medical Science of the National Institutes of Health under award number R01GM052111 to VIG and by Basque Government Department of Education, Universities and Research under award number BFI-2011-295 to UdC.