Ultra-high frequency ultrasound is a powerful live imaging tool to examine cardiac abnormalities in small animals. Its noninvasiveness allows maintaining the physiologic state of embryos. Herein, we show the use of M-mode ultrasound to measure the heart rates of embryos at E18.5 in utero.

Congenital heart disease (CHD) is the most frequent noninfectious cause of death at birth. The incidence of CHD ranges from 4 to 50/1,000 births (Disease and injury regional estimates, World Health Organization, 2004). Surgeries that often compromise the quality of life are required to correct heart defects, reminding us of the importance of finding the causes of CHD. Mutant mouse models and live imaging technology have become essential tools to study the etiology of this disease. Although advanced methods allow live imaging of abnormal hearts in embryos, the physiological and hemodynamic states of the latter are often compromised due to surgical and/or lengthy procedures. Noninvasive ultrasound imaging, however, can be used without surgically exposing the embryos, thereby maintaining their physiology. Herein, we use simple M-mode ultrasound to assess heart rates of embryos at E18.5 in utero. The detection of abnormal heart rates is indeed a good indicator of dysfunction of the heart and thus constitutes a first step in the identification of developmental defects that may lead to heart failure.

CHD is the most common noninfectious cause of death at birth1. Multiple surgeries are often needed to correct the structural defects in subjects whose quality of life may remain compromised1. Children with CHD frequently develop neurological disorders even if they have not undergone surgery, indicating important in utero consequences on development2,3. Both genetic and environmental factors, such as exposure to viruses or chemicals (alcohol) during pregnancy, cause CHD. Studying the genetic contributors is still at its early phase, but growing rapidly. To identify these contributors and understand their role in heart development, phenotyping mutant mice with a simple and powerful tool will be highly beneficial.

Mouse is indeed an animal model of choice to study CHD, and most of the human cases can be reproduced in mice4,5. Consequently, fetal mouse cardiac phenotyping has become increasingly important to investigate the etiology of human CHD and requires adequate tools. Although histological studies on fixed specimens are invaluable, real-time imaging of live animals is crucial to understand the physiology of the heart. Video microscopy offers live imaging. However, it requires laparotomy to expose embryos, thereby compromising their physiologic and hemodynamic state. Recently, echocardiography has become the standard imaging technique for cardiac assessments in the clinic as well as in mice.

Mouse fetal echocardiography is conducted using standard clinical ultrasound systems as well as ultra-high frequency ultrasound systems. The latter provide 30 MHz or higher frequency transducers that generate two-dimensional images and allow the assessment of early embryonic stages. These transducers have a relatively poor penetration depth (~13 mm), which is, however, sufficient to obtain adequate imaging planes and determine fundamental heart parameters, such as heart rate, left and right ventricular internal diameter at diastole and systole and septum and wall thickness, without performing laparotomy.

In our study, we have used an ultra-high frequency ultrasound system to assess heart rates of mouse embryos at embryonic day E18.5. We chose a 30 MHz transducer that provides a field view of 20 mm x 20 mm, which is ideal given the size of the fetuses, with a focal length of 12.7 mm. However, a higher frequency transducer may be chosen to analyze earlier developmental stages. The selected M-mode allows the visualization of tissues in motion thanks to a high temporal resolution of 1,000 frames/sec. The full procedure is simple and should be performed as quickly as possible to avoid any perturbation of the physiologic and hemodynamic states of the fetus. The analysis of about 8 embryos requires approximately 1 hr.

All procedures shown in this protocol have been approved by the IRCM Animal Care Committee.

The above method was used to assess the impact of the presence or absence of the serine protease furin in endothelial cells on heart rates of mouse embryos at E18.5 in utero. Furin belongs to the family of proprotein convertases (PCs) that cleave protein precursors after basic residues. Furin and its substrates are secretory proteins and cleavage can occur in the Golgi apparatus, endosomes or at the cell surface. Key substrates of furin include TGFb, and TGFb-like factors, such as the bone morphogenetic proteins (BMPs) that play an important role in heart development. Other members of the PC family can also activate typical substrates of furin by in vitro cleavage6. The key and unique role of furin during development is evidenced by the early death of furin-deficient embryos at embryonic day 117.

In utero analysis of heart rates in embryos at E18.5 showed that homozygous, but not heterozygous, ecKO embryos suffered from tachycardia (elevated heart rates; Figure 4). In agreement, subsequent magnetic resonance imaging revealed that ecKO embryos exhibited ventricular septal defects and/or valve malformations with some subcutaneous edema. Isolated septal and/or valve malformation cannot explain either heart failure or tachycardia. Although we cannot exclude other causes, the observed sudden death of homozygous ecKO newborns is likely due to cardiac failure. This finding was previously published10. 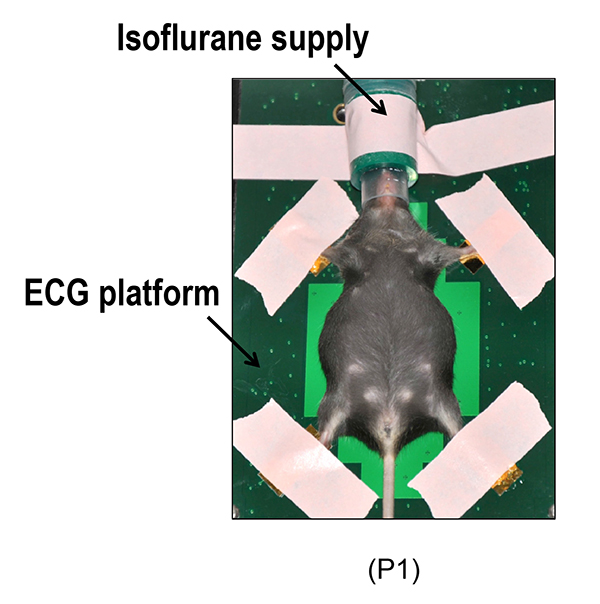 Figure 1. Overview of system set-up. (A) Ultra-high frequency ultrasound system with the scanhead in its holder is shown. (B) The station comprises an anesthetic system, the physiology controller unit and materials. Click here to view larger image. 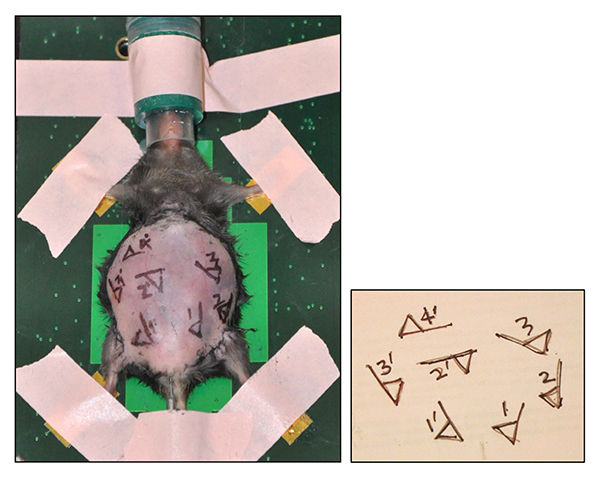 Figure 2. Mouse set-up. (A) The pregnant mouse is placed in supine position with isoflurane supply and restrained on the platform with tape. (B) After abdominal hair removal, the location of embryos is marked on the abdomen or (C) sketched on a paper. (D) The desired imaging plane is obtained by moving the scanhead that remains in contact with the ultrasound gel. The forearm is securely placed on the station to avoid shaking. Click here to view larger image. 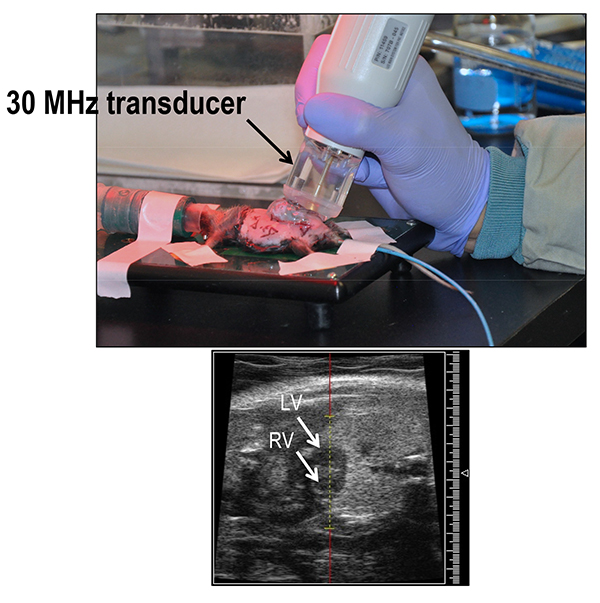 Figure 3. Representative assessment of heart rate. (A) A two-dimensional echocardiography image of an embryonic heart at E18.5 was obtained by positioning it within the focal zone centered on the yellow dashed line. The two ventricles are indicated by arrows. LV, left ventricle; RV, right ventricle. (B) Heart rate is calculated from repeated measurements between adjacent flow cycles in M-mode tracing. Click here to view larger image. 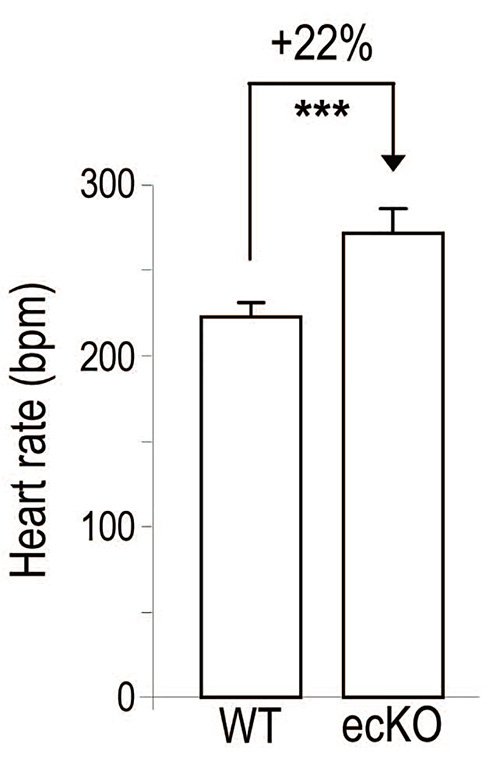 M-mode echocardiography is an effective and simple method to measure in utero heart rates of mouse embryos. Commercially available transducers provide sufficient resolution to visualize small beating hearts. Thus, they allow a highly accurate heart rate measurement, as compared to other methods such as pulse measurement, and can substitute high resolution video microscopy. However, current tools do not allow the simultaneous analysis of all embryos, implying a tedious procedure to visualize each of the embryos. In addition, the relatively narrow field of view and the absence of depth of field (2D-image) require a manual adjustment only achieved by trained hands. Indeed, a proper training can greatly maximize the efficiency of this method.

In vivo measurements of embryonic heart rates (E18.5) offers a physiological evaluation of heart function by a noninvasive live imaging as, different from previous methods, it does not require laparotomy. Instead, marking the position of the embryos on the abdomen of the pregnant female ensures a proper tracking and preserves their physiological state. Thus, the procedure overcomes the major weakness of other imaging technologies, such as computed tomography and magnetic resonance imaging. Last but not least, this method is less costly.

A few critical steps in this method include keeping the body temperature and heart rate of the pregnant mouse stable by adjusting the position of the heating lamp and generating a proper rate of isoflurane to maintain the physiological state of embryos and acquire reliable data. Proceeding in a consistent manner and in the shortest time possible is essential. Therefore, keeping the procedure simple and practicing prior to proceeding is highly recommended.

In conclusion, M-mode echocardiography is an effective method for assessing embryonic heart rates in utero. Abnormal heart rates are indicative of heart dysfunction and the method described will allow specialists, as well as nonspecialists, to screen for developmental defects leading to heart failure in mouse models.

We thank Manon Laprise for training in echocardiography and Ann Chamberland for taking the photos shown in Figures 1 and 2. This work was supported by Canadian Institutes of Health Research grant MOP 44363 and Canada Chair 950-216684.