Biliary atresia is a rare disease of infancy, with an estimated 1 in 15,000 frequency in the southeast United States, but more common in East Asian countries, with a reported frequency of 1 in 5,000 in Taiwan. Although much is known about the management of biliary atresia, its pathogenesis is still elusive. The sea lamprey (Petromyzon marinus) provides a unique opportunity to examine the mechanism and progression of biliary degeneration. Sea lamprey develop through three distinct life stages: larval, parasitic, and adult. During the transition from larvae to parasitic juvenile, sea lamprey undergo metamorphosis with dramatic reorganization and remodeling in external morphology and internal organs. In the liver, the entire biliary system is lost, including the gall bladder and the biliary tree. A newly-developed method called “CLARITY” was modified to clarify the entire liver and the junction with the intestine in metamorphic sea lamprey. The process of biliary degeneration was visualized and discerned during sea lamprey metamorphosis by using laser scanning confocal microscopy. This method provides a powerful tool to study biliary atresia in a unique animal model.

Sea lamprey develop through three distinct life stages1,2. Larval sea lamprey (L) spend most time in burrows as benthic filter feeders. After going through seven metamorphic stages of dramatic changes in external morphology and reorganization in internal organs3, the resulting juveniles (JV) enter a parasitic stage during which they feed on blood and tissue fluids from host fish, increasing the body mass more than 100 times. After 1.0 to 1.5 years feeding on the host fish in the ocean or large lakes, adults cease feeding during the early spring and migrate into rivers to spawn and then die1,2.

During metamorphosis, the sea lamprey liver loses the gall bladder and the entire biliary tree, an evolutionary mutant phenotype that mimics the human infant disease biliary atresia. Infant biliary atresia is a rare pediatric liver disease with severe medical complications4,5,6,7,8,9,10, however the pathogenesis and etiology of biliary atresia are largely unknown4. Patients with biliary atresia die within two years after birth unless surgical intervention (Kasai procedure) is performed5. Subsequently, these patients require extensive clinical management and often liver transplantation 6. Many theories of biliary atresia etiopathogenesis have been proposed, such as viral infection, congenital malformation, autoimmune disease, and toxic insult. However, the contribution of each to the development of biliary atresia remains inconclusive7,8,9,10.

Several important developmental events occur in the hepatobiliary system during sea lamprey metamorphosis. The bile duct and the gall bladder undergo apoptosis and degenerate (Figure 1). Combining the modified clarification method and staining with liver cell marker cytokeratin 19 (CK19, present in both cholangiocytes and hepatocytes before and after metamorphosis13) and anti-apoptotic marker Bcl2 using confocal microscopy, the entire biliary system was captured along the Z-axis (Figure 2) and the 3-dimensional structure was reconstructed (Figure 3). Laser scanning confocal microscopy was used to perform optical section through the intact liver since most of the biliary system is embedded inside the liver except the junction where the bile duct enters the intestine. The degenerative process occurs in metamorphic stages 2-4, starting from peripheral small bile ductules toward the central large intrahepatic common bile duct (Figure 2), consistent with earlier studies10. 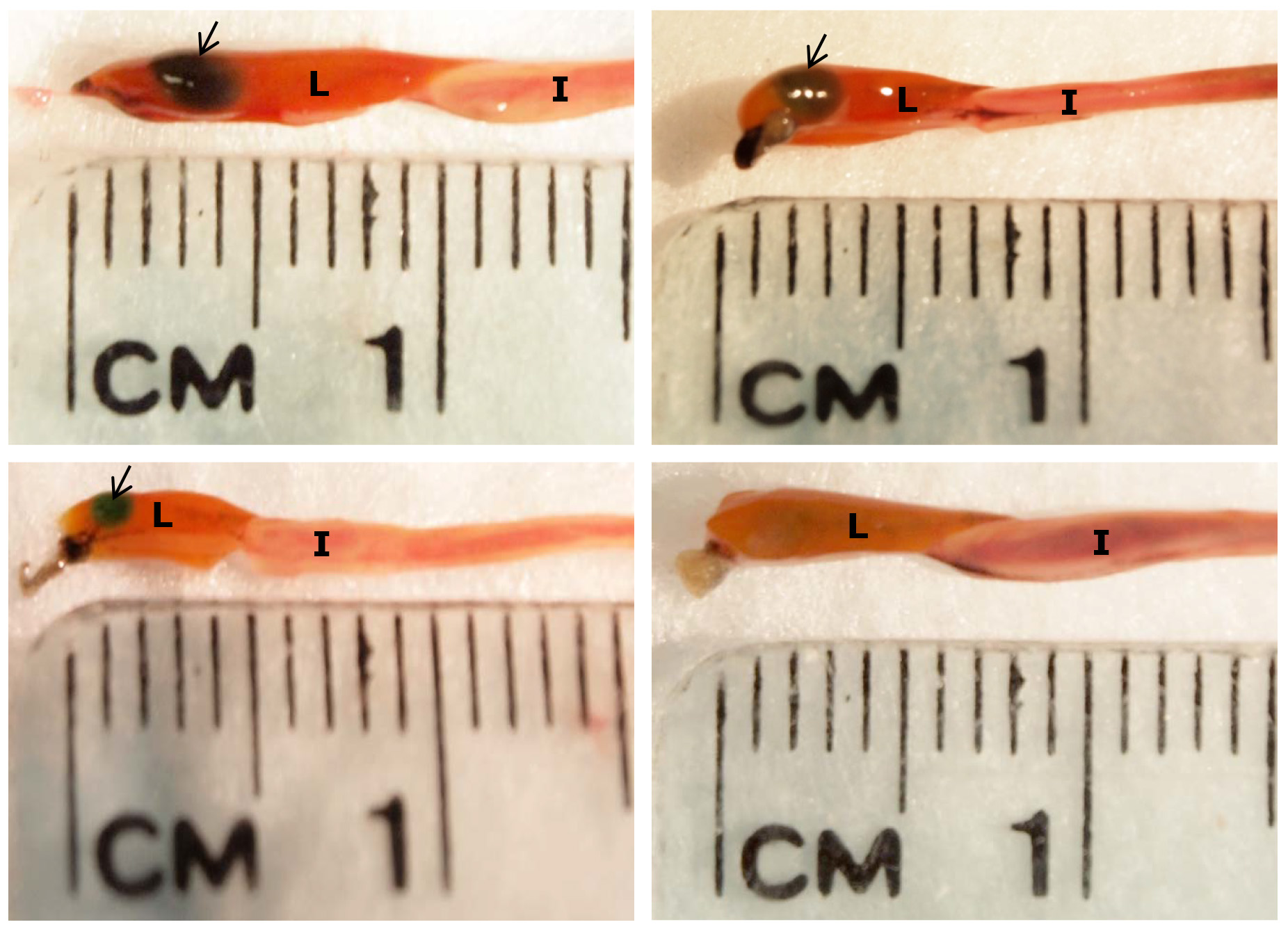 Figure 1. Gall bladder degeneration during sea lamprey metamorphosis. Sea lamprey lose the gall bladder (black arrows) during metamorphosis. The specimens were taken from animals with external morphology between metamorphic stages 2 and 3; i.e. round eye without (stage 2) or with (stage 3) sharp differentiation of iris and pupil, prominent papilla-like projections on the inner dorsal surface of the oral hood (both stages), thickened lips of oral hood (stage 2) forming a rectangular entrance into the oral cavity (stage 3), or "pug-like" snout (stage 3)3. Note that the gall bladder also changed color indicating differences in bile production. I: intestine. L: liver. Please click here to view a larger version of this figure. 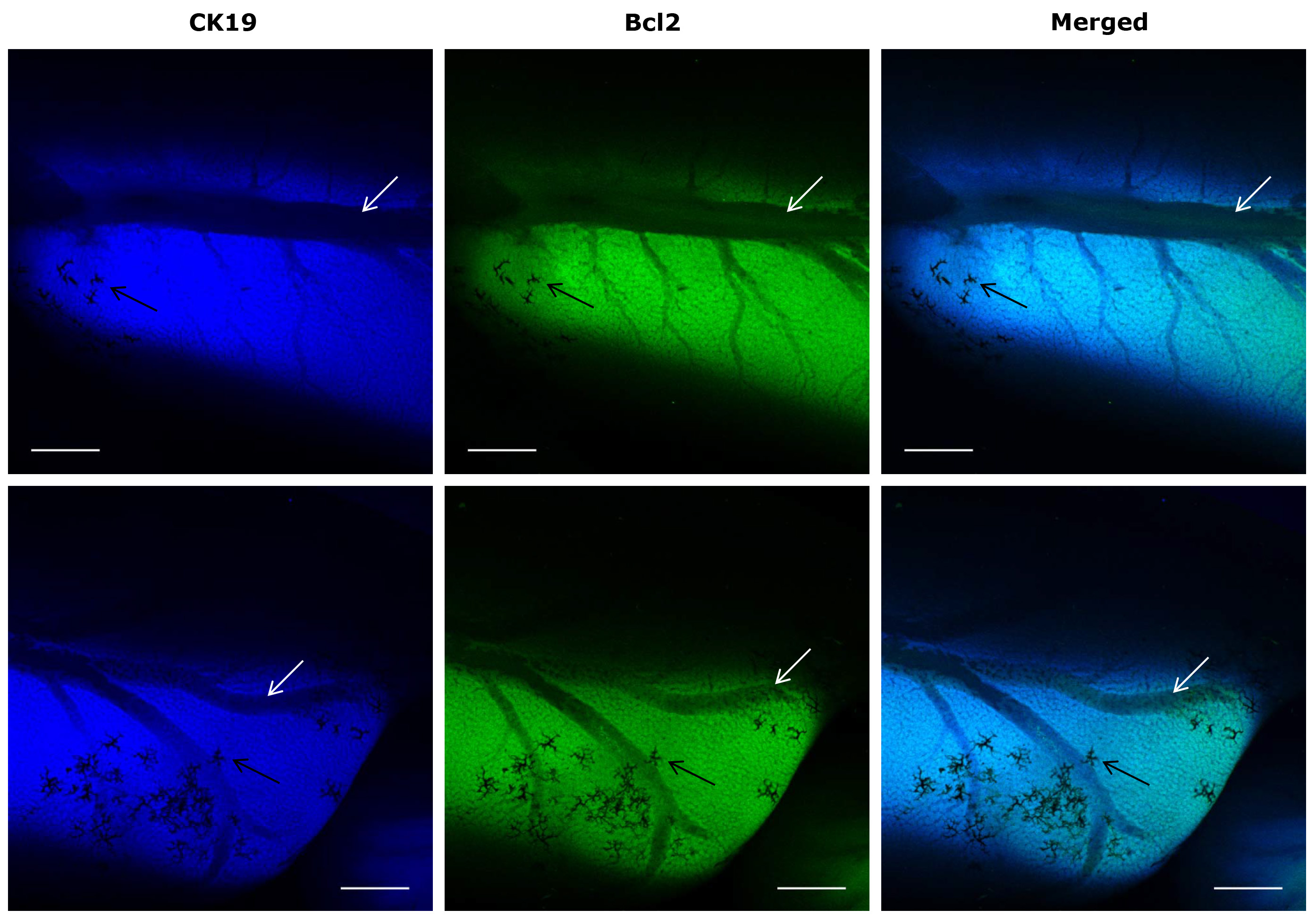 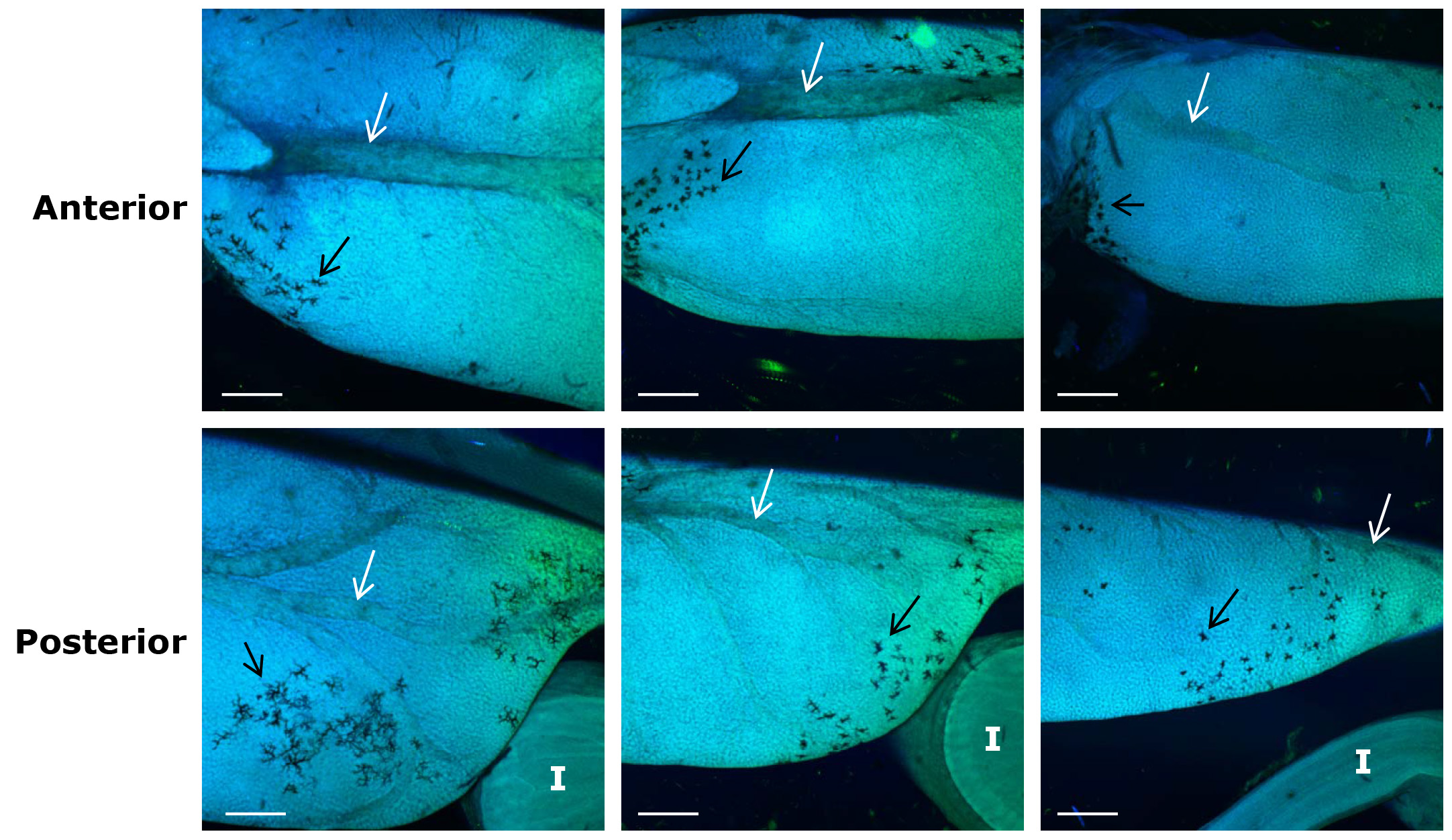 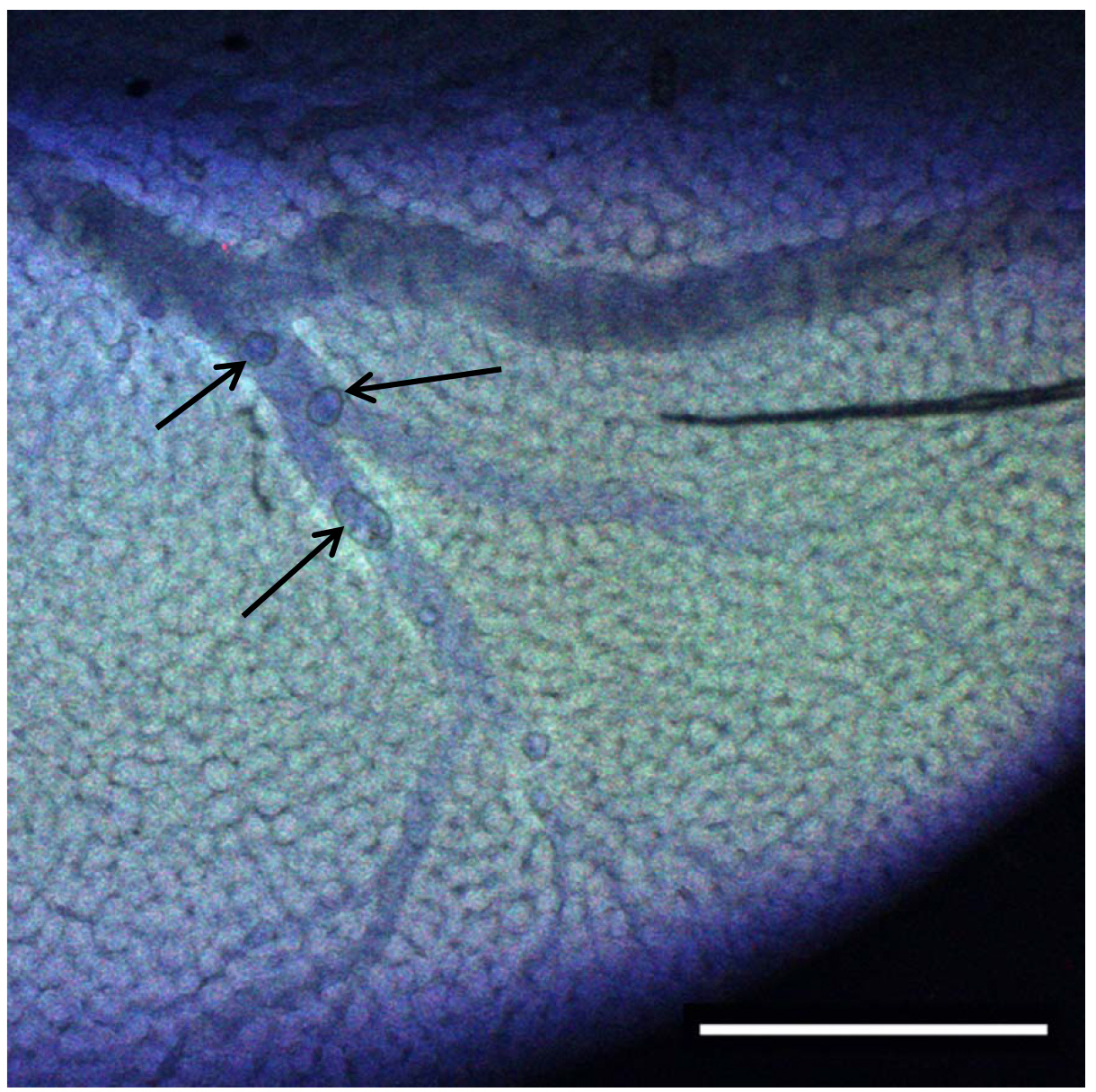 This protocol is modified from a new method called “CLARITY”12, which crosslinks intact tissue with polyacrylamide to form a nanoporous hydrogel, and then strips away the plasma membrane of the tissue to achieve optical transparency and macromolecular permeability. “CLARITY” allows intact-tissue imaging of long-range projection and local circuit wiring in the nervous system. This new method can be used to visualize the entire biliary system in sea lamprey liver during metamorphosis. It is a challenge in biology to obtain high-resolution information and maintain the global perspective from a complex system such as the entire biliary system or central nervous system using conventional embedding and sectioning methods. This modified CLARITY method allows a laser beam to penetrate through the intact sea lamprey larval liver up to a thickness of 1 to 2 mm using low-power fluorescent objective (4x) in a regular laser scanning confocal microscope. Deeper penetration can be achieved using a more advanced multi-photon confocal microscope. Three-dimensional images can be reconstructed using 3D reconstruction software. Achieving comparable results using conventional methods would be laborious, involving the piecemeal reconstruction of many sections, and would be limited to small tissue volumes. This new method provides valuable information from whole structural analyses of intact systems12, is less labor-intensive, more efficient and reproducible.

Another advantage of this new method is that the specimen can be reused multiple times for staining with different antibodies12. This makes the comparison between different molecular markers in the same specimen more reliable and reproducible. The stable framework generated by hydrogel allows effective removal of antibodies without fine structure damage and maintains the antigenicity for a long time12. The clearing solution denatures antibodies and disrupts binding, therefore acting as an antibody-stripping solution12. Several rounds of staining have been performed in the sea lamprey liver samples and the structure and staining remained optimal.

There are two major modifications in this protocol from the original “CLARITY” protocol12. (1) Free radical generating reagents (ammonium persulfate and TEMED) were used to initiate and accelerate the polymerization of the hydrogel instead of VA044. VA044 is photosensitive and not available in the U.S. (2) No custom-built electrophoresis chamber is used. In the CLARITY method12, due to the size of the tissues (mouse brain vs. lamprey liver), electrophoretic tissue clearing is required to expedite the extraction of the plasma membrane. To avoid the initial cost for a custom-built electrophoresis chamber, we first used existing agarose gel electrophoresis devices in our laboratory. This proved to be very inefficient. However, incubation in the clearing solution with raised temperature (50 °C) is very effective in clearing the plasma membrane.

Although the authors for “CLARITY” cautioned against the use of saponin in the hydrogel, it improves the transparency in the sea lamprey tissue in our procedure. One drawback for confocal imaging is that sea lamprey tissue has strong auto-fluorescence. The choice of fluorophores must be tested by comparing the images before and after immunofluorescent staining.

The authors acknowledge the contribution of Hammond Bay Biological Station, Great Lakes Science Center, U.S. Geological Survey. We also thank Dr. Melinda Frame at the Center for Advanced Microscopy at Michigan State University for her technical support in laser scanning confocal microscopy. This study is supported by grants from the Great Lakes Fishery Commission to YWCD and WML.