In internally fertilizing animals, seminal fluid is usually added to the spermatozoa, together forming the semen or ejaculate. Besides nourishing and activating sperm, the components in the seminal fluid can also influence female physiology to augment fertilization success of the sperm donor. While many studies have reported such effects in species with separate sexes, few studies have addressed this in simultaneously hermaphroditic animals. This video protocol presents a method to study effects of seminal fluid in gastropods, using a simultaneously hermaphroditic freshwater snail, the great pond snail Lymnaea stagnalis, as model organism. While the procedure is shown using complete prostate gland extracts, individual components (i.e., proteins, peptides, and other compounds) of the seminal fluid can be tested in the same way. Effects of the receipt of ejaculate components on egg laying can be quantified in terms of frequency of egg laying and more subtle estimates of female reproductive performance such as egg numbers within each egg masses. Results show that seminal fluid proteins affect female reproductive output in this simultaneous hermaphrodite, highlighting their importance for sexual selection.

Upon transfer, spermatozoa are usually accompanied by seminal fluid produced by male accessory glands. While some ejaculate components play roles in nourishing and activating sperm1, others influence female physiology in order to increase fertilization success of the sperm donor2-4. Such effects are especially selected for, via sexual selection, when a species is highly promiscuous and has efficient sperm storage and sperm digestion. Under such conditions, sperm donors compete heavily for the fertilization of eggs5. While there is abundant correlational evidence for the importance of seminal fluid substances for male fertilization success, direct evidence is more rare and few studies have delved into the details of the physiological change and/or substances involved6.

In species with separate sexes (i.e., males and females; gonochorists) there are a few well-investigated model species when it comes to seminal fluid composition and their effects. Examples include the fruit fly, Drosophila melanogaster6, the malaria mosquito, Anopheles gambiae7, and the red flour beetle, Tribolium castaneum8. Such seminal fluid studies are much rarer when it comes to species that are simultaneously hermaphroditic (i.e., individuals are functionally male and female at the same time), even though this mode of reproduction is common throughout the animal kingdom9. The most notable hermaphroditic example of the transfer of an accessory gland substance is probably the shooting of so-called love-darts in land snails2,10, where the substance is transferred by the sperm donor via hypodermic injection11,12, i.e., not along with the spermatozoa. But there are many simultaneous hermaphrodites that transfer male accessory gland products along with their sperm, such as the model species used here, the great pond snail Lymnaea stagnalis. Previous research has already demonstrated that the receipt of seminal fluid influences the female reproductive output of this species13-15, and several of the involved seminal fluid proteins have been identified16,17.

The overall goal of this protocol, which is an extension of the methods reported in Koene et al16, is to test effects of seminal fluid proteins on various parameters of egg laying in gastropod molluscs. This is accomplished by dissection of the prostate gland (i.e., the male accessory gland producing the seminal fluid) of sexually isolated donor snails from a standardized laboratory culture. Second, the donor’s sperm is collected from the seminal vesicles and different treatment solutions are made. Subsequently, test snails are anaesthetized and intravaginally injected with a test solution (for example, prostate gland extract alone, prostate gland extract with sperm, sperm alone, carrier medium alone). These test snails are then monitored for the following days to weeks, under standard conditions, to record egg laying. Egg masses are collected, digitally scanned for counting and measuring various parameters, and then put in individual vials for hatching. After about two weeks, the hatchlings are counted and digitally scanned. All the scans, of both egg masses and hatchlings, are then analyzed using a freely-available image analysis software package.

For this protocol the laboratory strain of the great pond snail, Lymnaea stagnalis, is used, which is bred at VU University in Amsterdam. This species serves as a model system for investigating questions about sexual selection and reproduction in hermaphrodites. The animal’s relatively large size makes it experimentally very accessible. In addition, because it is used as a model species in many biological disciplines we already know a lot about the basic biology of these animals. This method will help to study questions about processes of sexual selection that are mediated via seminal fluid proteins in general. In addition, because these are simultaneous hermaphrodites, it is possible to address whether such proteins act in similar and/or different ways as they do in species where the sexes are separated16,17.

Figure 1 shows the percentage of animals laying eggs after intravaginal injection of either the control substance (saline), Ovipostatin, or Ovipostatin accompanied with sperm. N = 15 for each treatment; see Koene et al.16 for details and statistics (Source: Figure 3 from Koene et al. 2010, PLoS ONE). 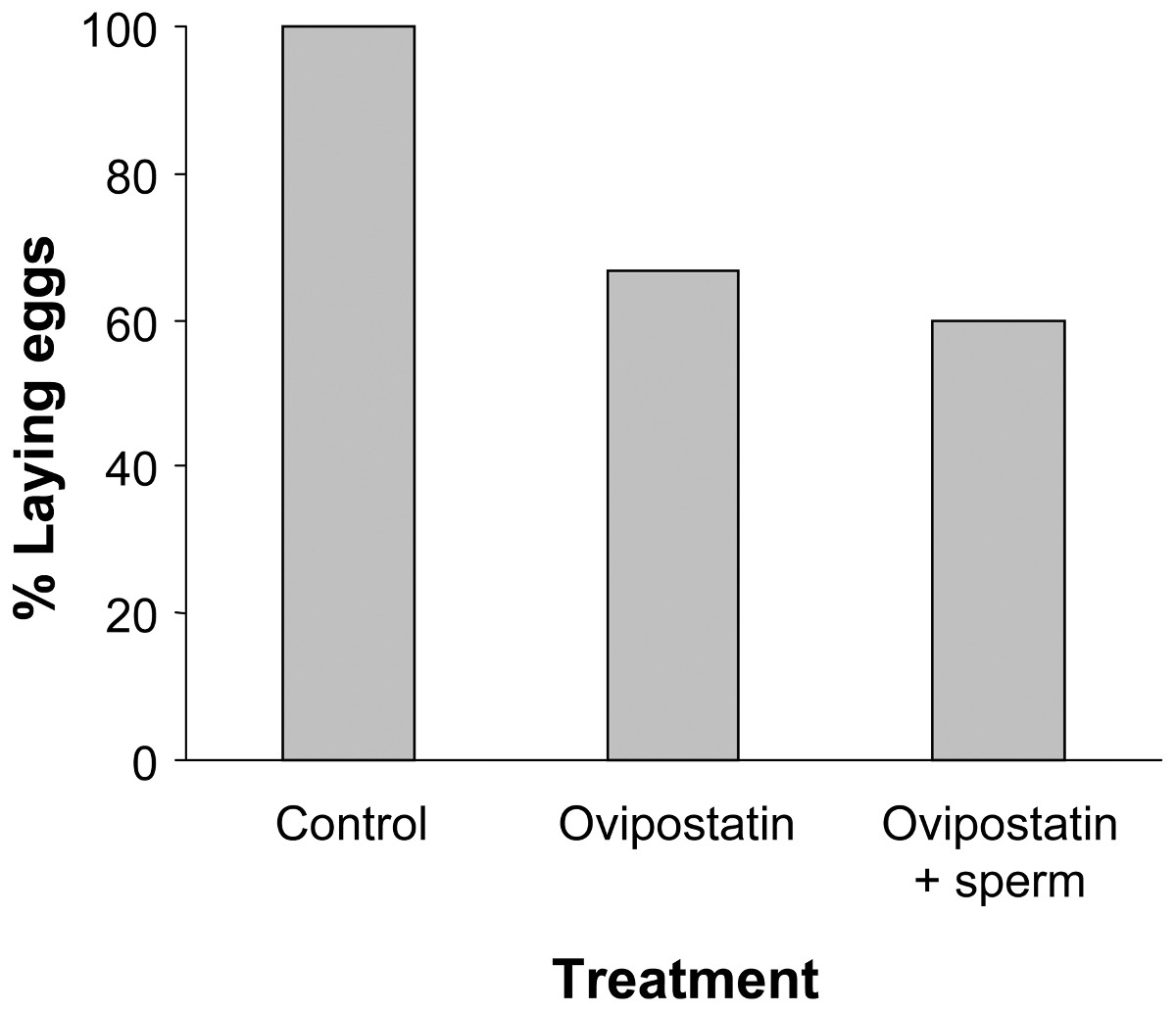 Figure 1. Effect of Ovipostatin on egg mass production of Lymnaea stagnalis. The graph shows the percentage of animals laying eggs after intravaginal injection of either the control substance (saline), Ovipostatin, or Ovipostatin accompanied with sperm. N=15 for each treatment; see Koene et al. 2010 details and statistics. Reprint with permission from Koene et al. 2010 PLoS ONE 5: e10117.

The presented protocol shows how to collect seminal fluid and how to test this in a biologically meaningful way. Although this procedure here is shown using the prostate gland extract, the effect of a single purified seminal fluid protein can also be tested following the same procedure. Obviously, in such tests it is always crucial to include proper controls (sham treatments) to ensure that the procedure and/or the carrier medium do not affect the parameters in questions14,16. Using this method, it has already been shown that there is a single seminal fluid protein, namely Ovipostatin, that mediates a reduction in egg laying14,16. This protein, produced in the prostate gland and transferred during mating along with the spermatozoa, represents the first fully characterized seminal fluid component in a simultaneous hermaphrodite and does, so far, not show any resemblance to known proteins.

The finding that Ovipostatin reduces egg mass production in the recipient corroborates earlier work indicating that substances in the semen may influence egg laying13-15. By transferring biologically relevant amounts (see 3.216), one can convincingly demonstrate that it is a seminal fluid protein, and not the presence of spermatozoa themselves, that mediates the observed reduction in egg laying (Figure 1). Given that repeated receipt of seminal fluid via natural matings increases the investment per egg15, it now becomes highly relevant to quantify other parameters of egg laying. The presented protocol now provides the necessary methods to do so. Although no effect was found of Ovipostatin on hatching success of the eggs laid by the recipient16, there may be other seminal fluid proteins that act in concert with this protein. Hence, parameters that need to be quantified in this context - next to laying frequency and egg numbers - include egg size, hatching time, hatchling development and hatchling size. In addition, it is possible to look at effects on other female processes than egg laying, such as sperm storage and usage, as well as the allocation of reproductive resources towards the female and male function14,17. Clearly, the presented method is instrumental in addressing these followup issues, both in Lymnaea stagnalis and in other fresh water snails.

In sum, experiments using this protocol show that transferred seminal fluid proteins affect the female reproductive performance of the recipient in these simultaneous hermaphrodites. Given that few studies have addressed this, it is likely to be much more common in internally fertilizing hermaphrodites than is currently reflected in the scientific literature. Especially when one realizes that pre-copulatory mate choice and sperm competition have been shown to play an important role in these hermaphrodites14, which highlights the potential of such male accessory gland proteins to be sexually selected in this system. Finally, this research helps to support the developing notion that seminal fluid proteins are of equal importance for simultaneous hermaphrodites as they are for separate-sexed species.

We thank M.R. Helmus for the voice-over, C.M. Popelier, S. Ypenburg and C. Levesque for technical assistance. This research is financially supported by the Netherlands Organization for Scientific Research (NWO), the Royal Netherlands Academy of Arts and Sciences (KNAW) and the Japan Student Services Organization (JASSO). This publication was supported by an Open Access grant of NWO to JMK.