Representative experimental procedures for the synthesis of N-(2-alkoxyvinyl)sulfonamides and subsequent conversion to phthalan and phenethylamine derivatives are presented in detail.

Rhodium(II)-azavinyl carbenoids have recently emerged as an exceptionally versatile reactive intermediate en route to numerous valuable products.1,2,3,4,5,6,7,8,9,10 In particular, many novel uses of these intermediates for production of heterocycles10 have provided chemists with new and efficient synthetic strategies. Toward this end, our group initiated development of a new protocol for the synthesis of phthalans11 that would capitalize on recent advancements in the inter- and intramolecular additions of oxygen-based nucleophiles to Rh(II)-azavinyl carbenoids derived from N-sulfonyl-1,2,3-triazoles.12,13,14,15,16,17 Our approach features a straightforward two-step protocol for converting terminal alkynes such as 1 into N-sulfonyl-1,2,3-triazoles 2 bearing a pendent alcohol (Figure 1). Subsequently, a Rh(II)-catalyzed denitrogenation / 1,3-OH insertion cascade from 2 provides phthalans 3 having a reactive N-(2-alkoxyvinyl)sulfonamide functional group.

Since the N-(2-alkoxyvinyl)sulfonamide moiety is a potentially versatile, but relatively underexplored N- and O-containing synthon,16,17,18,19,20,21,22,23,24,25,26,27 we became interested in studying the reactivity of its fused enol-ether/ene-sulfonamide system under a variety of conditions (Figure 2). After screening various reducing protocols, two methods were identified which led to stable phthalan and/or phenethylamine-containing products (Figure 2, 3 → 4/5). First, it was discovered that a standard hydrogenation of N-(2-alkoxyvinyl)sulfonamide 3a with catalytic palladium on carbon (Pd/C) selectively reduces the C=C bond to yield phthalan 4. Alternatively, treatment of 3a with sodium bis(2-methoxyethoxy)aluminum hydride in diethyl ether/toluene provides the uniquely substituted phenethylamine derivative 5. We believe that both of these transformations are valuable, as they lead to product classes with potential biological activity including neuroactive properties arising from the embedded phenethylamine, and in the case of 4, metal-chelation via the cis-oriented N- and O-atoms.

While investigating acid-promoted additions to exploit the electron-rich C=C bond of 3a, it was found that treatment of this compound with catalytic trimethylsilyl chloride in the presence of alcohols or a thiol yielded ketals 6a-c and thioketal 6e, respectively, while keeping the bicyclic phthalan framework intact. Alternatively, stirring 3a in a 1:1 acetic acid/water solution yields stable hemiketal 6d.

All compounds in this study were characterized by 1H and 13C NMR spectroscopy and electrospray ionization mass spectrometry (ESI-MS) to confirm the product structure and assess purity. Key data for representative compounds are described in this section.

Spectral data are in good agreement with the triazole structure of 2a (Figure 3). In the 1H NMR spectrum of 2a the characteristic C5 proton of the triazole appears at 8.45 ppm as a singlet integrating for 1H. The mass spectrum obtained via ESI-MS generally shows both the MH+ peak and a M-N2 peak corresponding to the loss of dinitrogen.

Synthesis of N-(2-alkoxyvinyl)sulfonamide phthalan 3a via our protocol reliably delivers the product in >90% yield, however, substantial deviation in key parameters such as time, temperature, and heating method significantly impact the efficiency of the reaction (vide infra) and, consequently, the quality of spectral data. Figure 4a depicts the 1H NMR spectrum of pure 3a following a successful experiment. Notable is the absence of the triazole C5 proton peak around 8.5 ppm (cf. Figure 3) and appearance of two doublets at 6.07 and 6.25 corresponding to the vinyl and NH protons, respectively. In the 13C NMR spectrum of 3a, a key resonance is observed at 94.9 ppm that corresponds to the exocyclic vinyl carbon. For comparison, Figure 5 illustrates the 1H NMR spectrum of 3a decomposition products resulting from rapid degradation in CDCl3.

Figure 6 and Figure 7 show 1H/13C NMR and mass spectra that are in good agreement with the structures of reduction products 4 and 5, respectively. The 1H NMR spectrum of 4, which maintains the bicyclic phthalan substructure, shows key signals corresponding to diastereotopic methylene protons 3.49 and 3.14 ppm. Contrastingly, the 1H NMR spectrum phenethylamine 5 displays the same methylene as a simple quartet at 3.27 ppm due to free rotation in the ring-opened product resulting in first-order splitting patterns.

For compounds 6a-e, a characteristic 13C NMR signal corresponding to the ketal, hemiketal or thioketal carbon is found between 95 - 110 ppm, such as the peak at 110.0 ppm observed in the 13C NMR spectrum of 6c (Figure 8). Additionally, mass spectra obtained by ESI-MS typically show a relatively small MH+ peak along with a larger M-RX elimination fragment peak (RX = the corresponding alkoxy or thioalkyl group of 6). 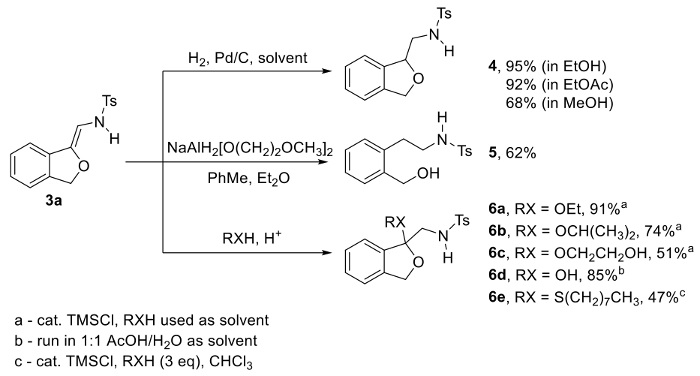 Figure 2. Differential reactivity of N-(2-alkoxyvinyl)sulfonamide phthalan 3a: conversion to reduced phthalan 4 via Pd-catalyzed hydrogenation, conversion to phenethylamine 5 via aluminum hydride reduction, and conversion to ketals 6a-c, hemiketal 6d, and thioketal 6e via acid-promoted addition of alcohols, water, and a thiol, respectively. Please click here to view a larger version of this figure. 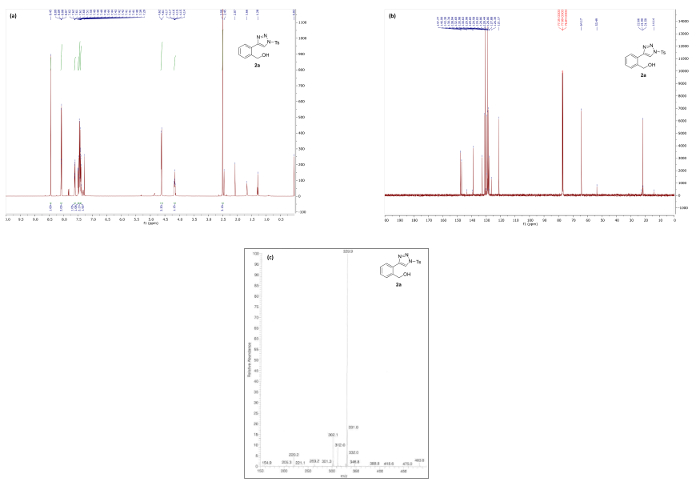 Figure 3. Spectral data for triazole 2a: (a) 1H NMR spectrum; (b) 13C NMR spectrum; and (c) mass spectrum. Please click here to view a larger version of this figure. 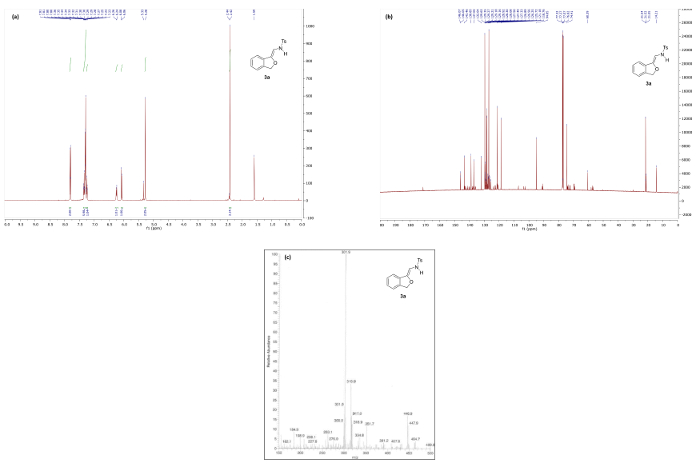 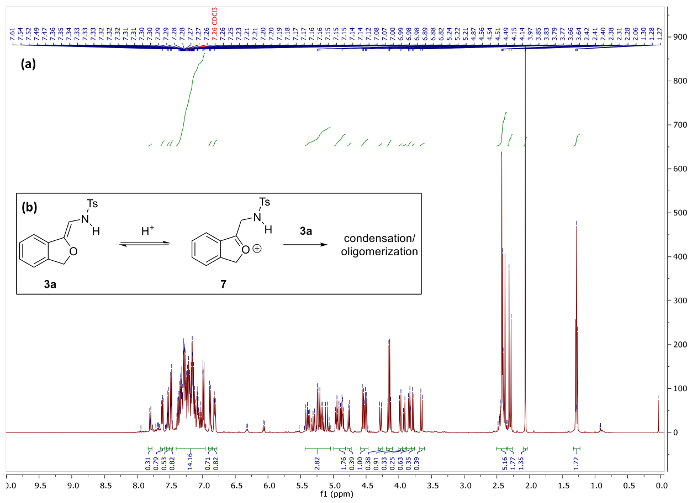 Figure 5. (a) 1H NMR spectra of 3a and decomposition products after storage in CDCl3 for 1h. (b) Hypothesized decomposition mechanism of 3a. Please click here to view a larger version of this figure. 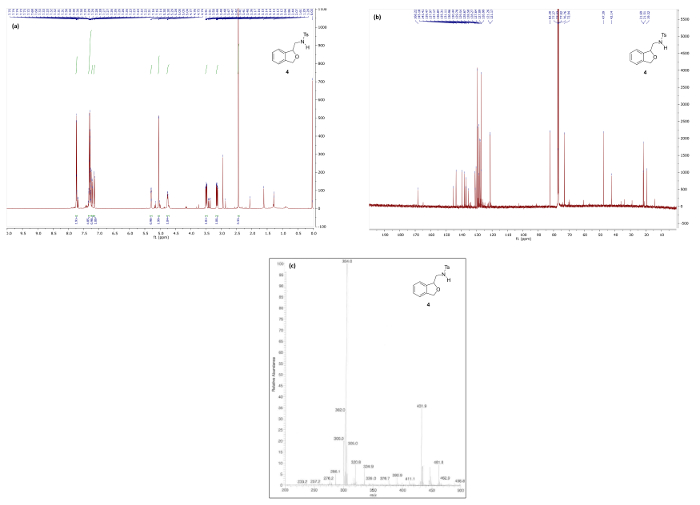 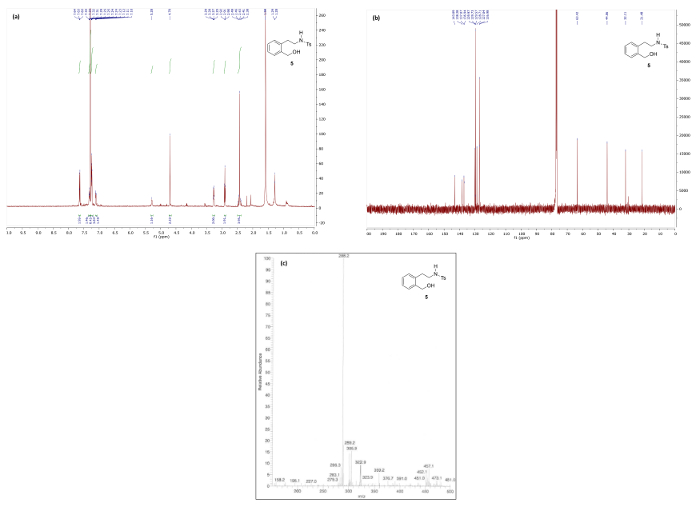 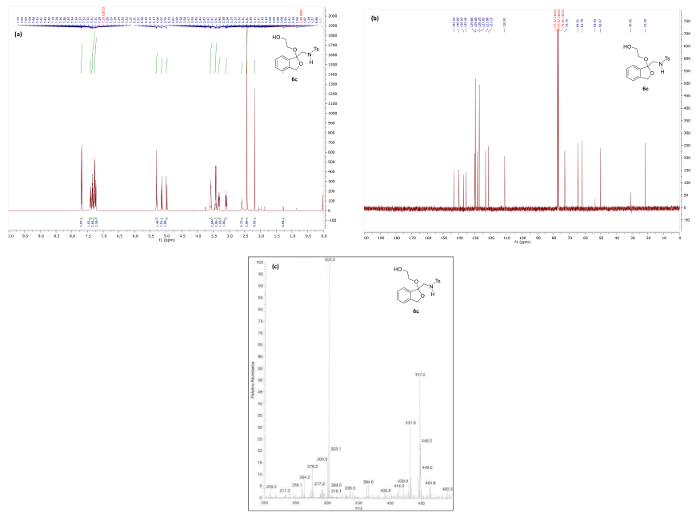 Figure 9. Strategic considerations for manipulation of compound 6, a differentially protected α-aminoketone. Please click here to view a larger version of this figure.

Triazoles 2a-b can be cleanly obtained via a Cu(I)-catalyzed azide-alkyne [3+2] cycloaddition (CuAAC) using CuTC as catalyst. Notably, triazole 2a is most efficiently generated at high temperature via a standard reflux in chloroform for 3h or heating to 100 °C for 15 min in a microwave reactor (note that time may vary depending on microwave efficiency); however, triazole 2b is most efficiently prepared via a CuAAC at room temperature. Therefore, effort must be taken to identify the optimal conditions in this substrate-dependent reaction when executing this protocol on a new substrate. In the microwave-promoted synthesis of 2a, care must be taken not to heat the reaction over 100 °C in the microwave, or beyond 15 min, as this typically leads to substantial decomposition.

Microwave heating of triazole 2a with 1 mol% of rhodium(II) acetate dimer at 100 °C in chloroform generates N-(2-alkoxyvinyl)sulfonamide phthalan 3a in high yield and purity. Several attempts were made to modify this procedure, however, only the microwave heating protocol gave good results. For example, performing the reaction by submersing a sealed microwave vial in a conventional oil bath at 100 °C led only to a complex mixture of products. Since both procedures for the synthesis of triazole 2a and phthalan 3a utilize chloroform as solvent and take place at 100 °C, we also made numerous attempts to execute a one-pot protocol for the synthesis of 3a directly from alkyne 1a in the presence of tosyl azide, CuTC, and Rh2(OAc)4 under a variety of conditions, but without success.11

When handling 3a, it is critical to avoid acidic conditions as this will cause rapid decomposition. For example, when 3a is purified via a brief silica gel plug, pure product can be obtained as judged by 1H NMR spectral data (Figure 4). However, storage of 3a on silica or in non-neutralized CDCl3 (which contains trace HCl/DCl) for more than several minutes leads to a complex mixture of products (Figure 5). Presumably, this process occurs via condensation between the nucleophilic furan 3a and its corresponding electrophilic tautomer 7. Notably, CDCl3 that has been neutralized by K2CO3 prior to use slows down the decomposition process of 3a significantly, but not completely. Interestingly, N-(2-alkoxyvinyl)sulfonamide phthalan 3b was found to be stable in mildly acidic, non-neutralized CDCl3 for at least 3 d and in storage for 4 weeks, which suggests that steric hindrance and/or electronic factors can be used to attenuate the reactivity of this functional group.

N-(2-Alkoxyvinyl)sulfonamides such as 3a serve as a pivotal intermediates, and when freshly prepared can be used as unique precursors toward phthalan and phenethylamine derivatives. Catalytic hydrogenation of 3a with 10 mol% Pd/C in EtOH or EtOAc delivers the phthalan 4 in high yield whereas treatment with the sodium bis(2-methoxyethoxy)aluminum hydride provides the ring-opened phenethylamine 5 (Figure 2). In each of these reductions, the solvent has a significant impact on the efficiency of the reaction. Hydrogenation in MeOH generates 4 in similar purity, but significantly lower yield. The aluminum hydride reduction was only found to work when diethyl ether was used as the primary solvent; little to no product is observed when this reaction is attempted in THF, MTBE, 1,4-dioxane, PhMe, or CHCl3.

Dissolving freshly prepared 3a in alcoholic solvent containing catalytic TMSCl provides ketals 6a-c in moderate to high yields. Alternatively, thioketal 6e can be prepared by treating 3a with 3 eq of octane thiol, whereas hemiketal 6d is produced by stirring 3a in a 1:1 mixture of acetic acid and water.

A notable advantage of this ketalization approach is that the resulting compound is a differentially protected α-amino ketone, an often unstable class of compound whenever a basic amine and enolizable ketone are present at the same time.29,30,31,32 Furthermore, as illustrated in Figure 9, differential protection may offer the strategic advantage of manipulating the protected amine or ketone in separate, orthogonal operations.

In the future, we expect that these protocols can be employed for the synthesis of novel, bioactive compounds bearing the privileged phenethylamine substructure and/or phthalan scaffold. In addition, we have demonstrated the utility of N-(2-alkoxyvinyl)sulfonamides as versatile functional groups. Therefore, further investigation of this under-explored synthon in valuable synthetic transformations is merited.

This work was funded by Hamilton College and the Edward and Virginia Taylor Fund for Student/Faculty Research in Chemistry.