Here, we present a protocol to conjugate protein monomer by enzymes forming protein polymer with a controlled sequence and immobilize it on the surface for single-molecule force spectroscopy studies.

Chemical and bio-conjugation techniques have been developed rapidly in recent years and allow the building of protein polymers. However, a controlled protein polymerization process is always a challenge. Here, we have developed an enzymatic methodology for constructing polymerized protein step by step in a rationally-controlled sequence. In this method, the C-terminus of a protein monomer is NGL for protein conjugation using OaAEP1 (Oldenlandia affinis asparaginyl endopeptidases) 1) while the N-terminus was a cleavable TEV (tobacco etch virus) cleavage site plus an L (ENLYFQ/GL) for temporary N-terminal protecting. Consequently, OaAEP1 was able to add only one protein monomer at a time, and then the TEV protease cleaved the N-terminus between Q and G to expose the NH2-Gly-Leu. Then the unit is ready for next OaAEP1 ligation. The engineered polyprotein is examined by unfolding individual protein domain using atomic force microscopy-based single-molecule force spectroscopy (AFM-SMFS). Therefore, this study provides a useful strategy for polyprotein engineering and immobilization.

Compared with synthetic polymers, natural multi-domain proteins have a uniform structure with a well-controlled number and type of subdomains1. This feature usually leads to improved biological function and stability2,3. Many approaches, such as cysteine-based disulfide bond coupling and recombinant DNA technology, have been developed for building such a polymerized protein with multiple domains4,5,6,7. However, the former method always results in a random and uncontrolled sequence, and the latter one leads to other problems, including the difficulty for the overexpression of toxic and large-size proteins and the purification of complex protein with cofactor and other delicate enzymes.

To meet this challenge, we develop an enzymatic method that conjugates protein monomer together for polymer/polyprotein in a stepwise fashion using a protein ligase OaAEP1 combined with a protease TEV8,9. OaAEP1 is a strict and efficient endopeptidase. Two proteins can be linked covalently as Asn-Gly-Leu sequence (NGL) through two termini by OaAEP1 in less than 30 min if the N-terminus is Gly-Leu residues(GL) and the other of which the C-terminus is NGL residues10. However, the use of OaAEP1 only to link protein monomer leads to a protein polymer with an uncontrolled sequence like the cysteine-based coupling method. Therefore, we design the N-terminus of the protein unit with a removable TEV protease site plus a leucine residue as ENLYFQ/G-L-POI. Before the TEV cleavage, the N-terminal would not participate in OaAEP1 ligation. And then the GL residues at N-terminus, which are compatible with further OaAEP1 ligation, is exposed after the TEV cleavage. Thus, we have achieved a sequential enzymatic biosynthesis method of polyprotein with a relatively well-controlled sequence.

Here, our stepwise enzymatic synthesis method can be used in polyprotein sample preparation, including sequence-controlled and uncontrolled, and protein immobilization for single-molecule studies as well, especially for the complex system such as metalloprotein.

Moreover, AFM-based SMFS experiments allow us to confirm the protein polymer construction and stability at the single-molecule level. Single-molecule force spectroscopy, including AFM, optical tweezer and magnetic tweezer, is a general tool in nanotechnology to manipulate biomolecule mechanically and measure their stability11,12,13,14,15,16,17,18,19,20. Single-molecule AFM has been widely used in the study of protein (un)folding21,22,23,24,25, the strength measurement of receptor-ligand interaction26,27,28,29,30,31,32,33,34,35, inorganic chemical bond20,36,37,38,39,40,41,42,43 and metal-ligand bond in metalloprotein44,45,46,47,48,49,50. Here, single-molecule AFM is used to verify the synthesized polyprotein sequence based on the corresponding protein unfolding signal.

2. Functionalization of coverslip and cantilever surface

The NGL residues introduced between adjacent proteins by OaAEP1 ligation will not affect protein monomer stability in the polymer as the unfolding force (<Fu>), and contour length increment (<ΔLc>) is comparable with the previous study (Figure 1). The purification result of the rubredoxin protein is shown in Figure 2. To prove the protein after TEV cleavage is compatible with the following OaAEP1 ligation to construct protein polymer with a control sequence and the construction is high-efficiency, Figure 3 provides an SDS-PAGE image as a reference. The steps of the functionalized cantilever and coverslip preparation are described in Figure 4. The stepwise enzymatic biosynthesis and immobilization of polyprotein on the coverslip are shown in Figure 5. Use this protocol, a protein polymer with the controlled sequence can be built and suitable for AFM-based SMFS experiments.

Figure 1: AFM-based SMFS measurements of polyprotein built by OaAEP1. (A) Typical sawtooth-like force-extension curves of Ub (curve 1 in blue) were shown with expected ΔLc of ~23 nm. (B) The scatter plot presents the relationship between Ub unfolding force (202 ± 44 pN, average ± s.d., n = 198) and ΔLc (23 ± 2 nm, average ± s.d.). This figure has been modified from Ref.8. Please click here to view a larger version of this figure. 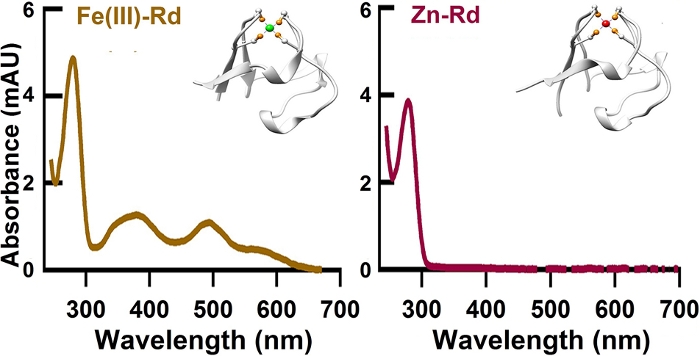 Figure 2: The UV-Vis absorbance spectra of GL-GB1-Fe(III)-Rd-NGL and GL-GB1-(Zn)-Rd-NGL. The Fe(III)-form Rd (Left spectrum, colored in brown, PDB code:1BRF) presented typical UV-Vis absorption peaks at 495 nm and 579 nm while the Zn-form did not (Right spectrum, colored in wine, PDB code: 1IRN). This figure has been modified from Ref.8. Please click here to view a larger version of this figure. 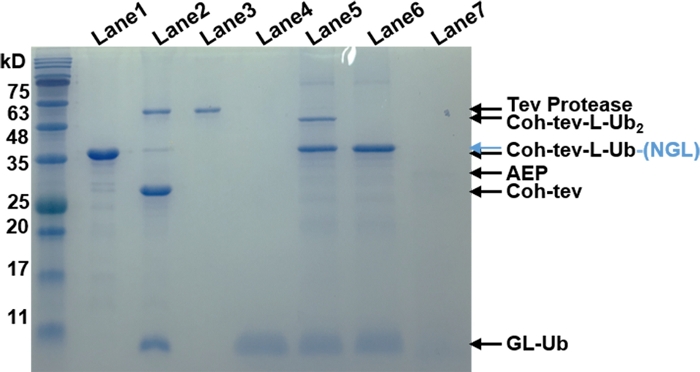 Figure 3: SDS-PAGE gel results of stepwise digestion and ligation using TEV protease and OaAEP1 to build the Ub dimer. Lanes 1–4 showed Coh-tev-L-Ub, the result protein mixture of TEV cleavage, pure sfGFP-TEV protease and purified product (GL-Ub). Lanes 5–7 showed the cleaved GL-Ub and Coh-tev-L-Ub-NGL ligation mixture with (Lane 5) or without (Lane 6) OaAEP1 and pure OaAEP1. This figure has been modified from Ref.8. Please click here to view a larger version of this figure. 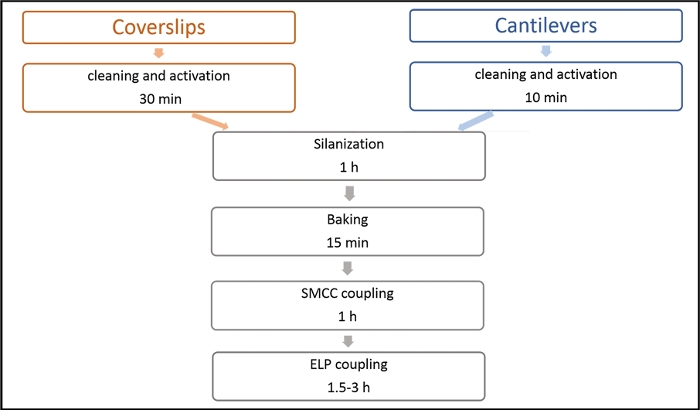 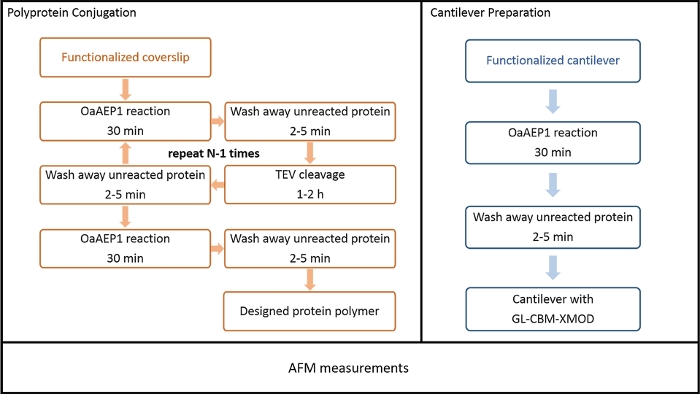 Figure 5: Process chart describing each step for polyprotein immobilization on the surface. Top left process flow diagram shows the stepwise building of polyprotein with controlled sequences on the coverslip. Top right diagram shows the preparation of the functionalized cantilever used in the AFM measurements. Please click here to view a larger version of this figure. 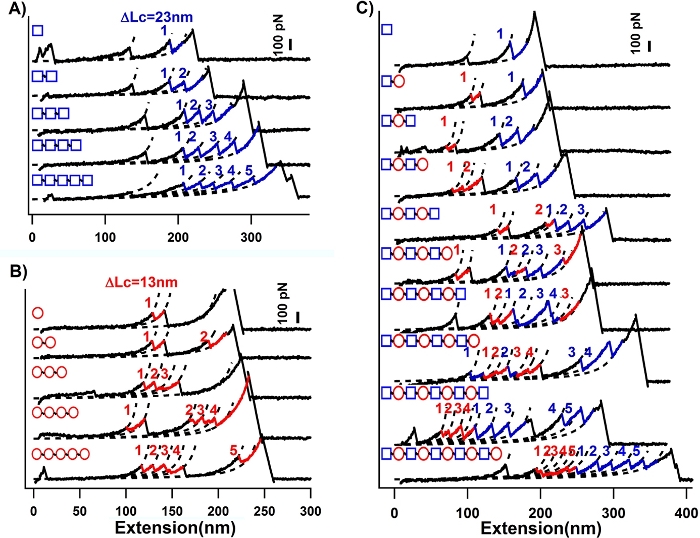 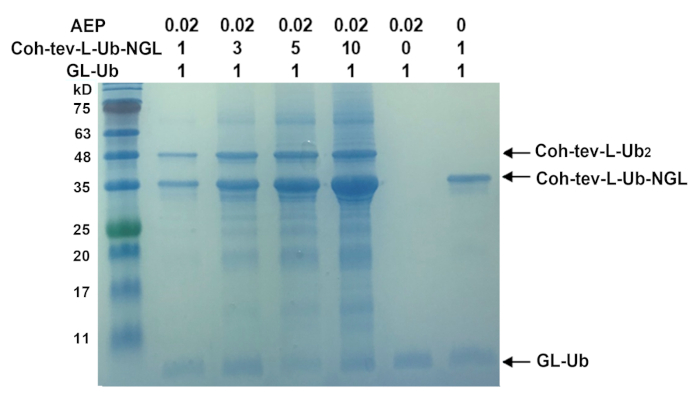 Supplementary Figure 1: SDS-PAGE gel results of the protein ligation efficiency under different ratio between two reactants. The ligation efficiency was 20% when the ratio is 1 to 1 and reached 75% at the ratio of 10 to 1. This figure has been modified from Ref.8. Please click here to view a larger version of this figure.

We have described a protocol for enzymatic biosynthesis and immobilization of polyprotein and verified the polyprotein design by AFM-based SMFS. This methodology provides a novel approach to building the protein-polymer in a designed sequence, which complements previous methods for polyprotein engineering and immobilization4,6,52,53,54,55,56,57,58,59,60,61.

Compared with the widely-used bi-cysteine method forming intermolecular disulfide bond for protein polymerization4, our enzymatic method using both OaAEP1 and TEV protease results in a polyprotein with a relatively controlled sequence and defined connection geometry. And it does not use cysteine, which is an essential functional residue for many proteins.

Our method is mostly similar to sortase-based protein conjugation59. The unique feature of our method is that the OaAEP1-based protein ligation is much more efficient, thus allows the construction of protein pentamer with a reasonable yield10,53. It also needs fewer residues for ligation and results in a shorter three-residues NGL linker. As a result, it shows no "linker effect" as the newly formed NGL linker does not affect the stability of individual protein monomer or induce any unnatural protein-protein interaction. Nevertheless, we believe that all methods have their own advantages and disadvantages. For example, the classic recombinant DNA method does not add any residue between protein monomer and not require the use of any enzyme for ligation. And the bi-cysteine method is simple and easy for protein polymerization. Thus, they can all be useful under different experimental requirements.

For our stepwise construction of polyprotein, it is crucial to remove the unreacted protein completely. Take enough volume of AFM buffer and enough time to clean the reacted surface carefully. Otherwise, the residual protein or protease will affect further synthesis reactions.

The efficiency of OaAEP1 ligation is a critical limit to our method as the TEV cleavage efficiency is almost complete (96%). It is critical to raise the ratio between the two reactants, GL-protein, and protein-NGL, to improve the ligation efficiency. Our study shows that when protein-NGL is tenfold to GL-protein, the efficiency increases from 20% (the ratio is 1 to 1) to 75% (Supplementary Figure 1). It is critical to consume the reactant, which was immobilized onto the surface as the free reactant can be moved away by washing with buffer. Additionally, whether the N- or C- terminus is exposed to the solution is also a crucial factor to ligation. It is an optional approach to expose the terminal by adding a linker containing the recognized site to the respective terminal.

In the end, our protocol is an enzymatic way to conjugate proteins in a designed sequence. It also provides an alternative approach to couple and immobilize protein samples in single-molecule studies.