We provide a method for testing BRCA1 variants in a tissue culture based assay for homologous recombination repair of DNA damage by depleting endogenous BRCA1 protein from a cell using RNAi and replacing it with a BRCA1 point mutant that contains a coding change.

The functional analysis of missense mutations can be complicated by the presence in the cell of the endogenous protein. Structure-function analyses of the BRCA1 have been complicated by the lack of a robust assay for the full length BRCA1 protein and the difficulties inherent in working with cell lines that express hypomorphic BRCA1 protein1,2,3,4,5. We developed a system whereby the endogenous BRCA1 protein in a cell was acutely depleted by RNAi targeting the 3'-UTR of the BRCA1 mRNA and replaced by co-transfecting a plasmid expressing a BRCA1 variant. One advantage of this procedure is that the acute silencing of BRCA1 and simultaneous replacement allow the cells to grow without secondary mutations or adaptations that might arise over time to compensate for the loss of BRCA1 function. This depletion and add-back procedure was done in a HeLa-derived cell line that was readily assayed for homologous recombination activity. The homologous recombination assay is based on a previously published method whereby a recombination substrate is integrated into the genome (Figure 1)6,7,8,9. This recombination substrate has the rare-cutting I-SceI restriction enzyme site inside an inactive GFP allele, and downstream is a second inactive GFP allele. Transfection of the plasmid that expresses I-SceI results in a double-stranded break, which may be repaired by homologous recombination, and if homologous recombination does repair the break it creates an active GFP allele that is readily scored by flow cytometry for GFP protein expression. Depletion of endogenous BRCA1 resulted in an 8-10-fold reduction in homologous recombination activity, and add-back of wild-type plasmid fully restored homologous recombination function. When specific point mutants of full length BRCA1 were expressed from co-transfected plasmids, the effect of the specific missense mutant could be scored. As an example, the expression of the BRCA1(M18T) protein, a variant of unknown clinical significance10, was expressed in these cells, it failed to restore BRCA1-dependent homologous recombination. By contrast, expression of another variant, also of unknown significance, BRCA1(I21V) fully restored BRCA1-dependent homologous recombination function. This strategy of testing the function of BRCA1 missense mutations has been applied to another biological system assaying for centrosome function (Kais et al, unpublished observations). Overall, this approach is suitable for the analysis of missense mutants in any gene that must be analyzed recessively.

The recombination substrate in the pDR-GFP plasmid, and in stable transformants, contains two inactive alleles of GFP (Figure 1). One allele is inactive due to the inclusion in its coding sequence of the 18 bp restriction enzyme recognition site for I-SceI. Expression of I-SceI in these cells creates a double-stranded DNA break (DSB). There is a second allele of inactive GFP on this DNA, but the portion of its sequence correlated with the I-SceI site on the first allele is wild-type. This second GFP allele can function as a sequence donor for homologous recombination repair of the DSB and would result in an active GFP allele, which is readily detected by flow cytometry. Alternatively, the DSB could be repaired by nonhomologous end-joining, which would destroy the I-SceI restriction site and would result in GFP-negative cells. The level of homologous recombination in a cell is determined by counting the percentage of GFP-positive cells.

This cell line, pHeLa-DR13-9, was selected among all clones for zero background GFP signal and a relatively high percentage of GFP-positive cells upon transfection with the I-SceI expressing plasmid, pCBASce. (The pCBASce and its vector control, pCAGGS, were both supplied by M. Jasin of Memorial Sloan-Kettering Cancer Center.)
The HeLa-DR13-9 cell line is available from the authors upon request.

2. Transfection to Deplete Endogenous BRCA1 and Add Back Mutant BRCA1.

BRCA1 regulates the pathway for repair of double stranded DNA breaks by homologous recombination6,11. Those cells which have undergone repair by homologous recombination are readily detected by fluorescence microscopy (Figure 2, top). Depletion of BRCA1 results in a decrease in the detected GFP-positive cells (Figure 2, right). The output from the FACSCalibur is a histogram with GFP intensity per cell on the X-axis and number of cells on the Y-axis (Figure 2, bottom). In a typical set of results from a single experiment, 15.5% of the cells were GFP-positive after I-SceI expression and control RNAi depletion (Figure 3). By comparison, depletion of BRCA1 and vector add back reduced GFP-conversion to 0.7%. Add-back of wild-type BRCA1 or of BRCA1(I21V) fully restored homologous recombination, as detected by obtaining 15-16% GFP-positive cells. Add-back of the BRCA1(M18T) mutant (Figure 3, lane 5) had similar effect as the add-back of the vector control. Since this variant expressed at similar levels as the endogenous protein9, we thus interpret the BRCA1(M18T) variant is non-functional in homologous recombination.

Add back of BRCA1 mutants have so far yielded robust results: each BRCA1 variant has either fully restored homologous recombination activity or has had no effect. An important consideration in obtaining these results is that our transfection conditions produce levels of BRCA1 protein that approximately equal the concentration of the endogenous protein in untreated cells. Too high of an overexpression of even a defective mutant of BRCA1 may result in some positive homologous recombination activity. 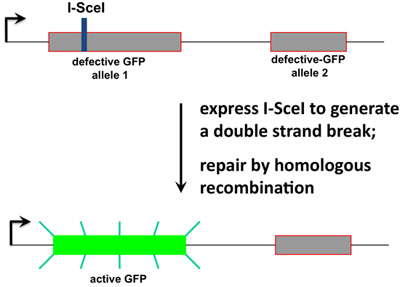 Figure 1. The recombination substrate. The strategy that had been developed by the group of M. Jasin7,12 is depicted. The pDR-GFP plasmid contains two defective alleles of GFP, one of which contains an I-SceI restriction endonuclease site. A HeLa derived cell line contains this DNA substrate integrated at a single site in the genome9, and active repair of the double-stranded DNA break at the I-SceI site by homologous recombination results in conversion of one allele to GFP-positive. 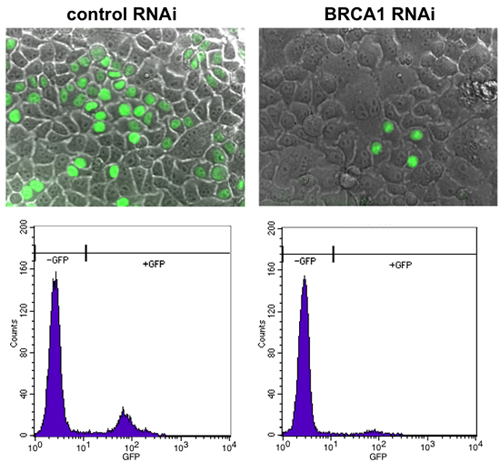 Figure 2. Detection of GFP-positive cells by fluorescence microscopy. Cells were tested as per this protocol, and control-depleted cells were active in homologous recombination, as detected by a high percentage of cells with GFP expression (left). Depletion of BRCA1 by RNAi results in a sharp decrease in the number of GFP-positive cells (right). 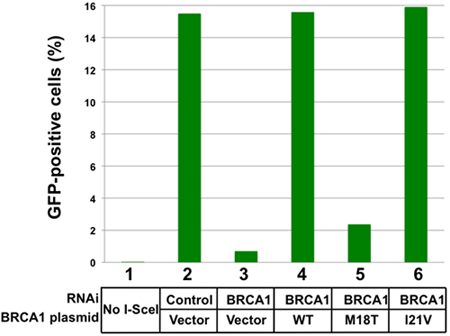 Figure 3. Results of an add-back of BRCA1 missense mutants. Results from a single experiment are shown in this histogram. In the absence of transfected I-SceI expressing plasmid (lane 1) there are no GFP-positive cells detected. The results in lanes 2-6 were all taken from cells in which the I-SceI expressing plasmid was transfected on day 3. In cells that were depleted for an irrelevant gene (luciferase) and with vector add-back, 15.5% of the cells were GFP-positive (lane 2). Depletion of BRCA1 and vector add-back reveals the effect of loss of BRCA1 on homologous recombination (lane 3). The effects of depletion of BRCA1 and add-back of wild-type BRCA1 (lane 4), BRCA1(M18T) (lane 5), and BRCA1(I21V) (lane 6) are shown. These results are from a single experiment, and would be combined with at least two more repeat experiments in order to obtain a measure of the homologous recombination supported by a given mutant BRCA1 protein.

The advantage of this method is that we can study the function of the BRCA1 protein in regulating DNA repair by homologous recombination using cells that have wild-type endogenously expressed BRCA1. We have adopted two separate established methods of studying the homologous recombination process and of utilizing RNAi-mediated depletion to obtain the novel method for testing BRCA1 variants for function in DNA repair. The key for the success of this method was to establish a readily transfectable cell line, such as HeLa, with the recombination substrate in the genome such that we obtain very high levels of GFP conversion. We had screened multiple clones of the original transformation in order to obtain one that had no detectable background GFP signal, but upon transfection of the I-SceI expression plasmid had a very high level of GFP conversion.

With this method, we are now investigating other specific BRCA1 amino acid residues for function in homologous recombination. Along with the biological insights from this work, these conclusions can be applied to clinical cancer genetics. A high percentage of BRCA1 missense mutations have unknown clinical significance since there are many rare variants and there is insufficient information for many of these to determine the cancer association by genetic segregation analysis3,10,13,14. Using this method, the consequences of a specific variant on the biological function of BRCA1 in regulating homologous recombination could be used to inform women who carry one of these variants in their genome.

We are grateful to the Ohio State University Comprehensive Cancer Center for providing funding for this work. 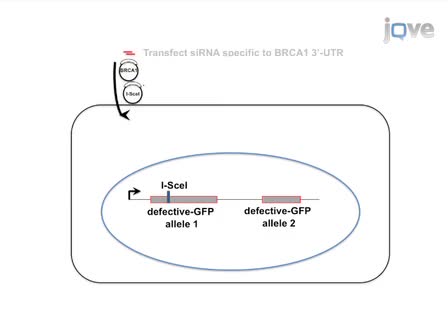