Quantification of cellular inflammation in the injured/pathological CNS by flow cytometry is complicated by lipid/myelin debris that can have similar size and granulation to cells, decreasing sensitivity/accuracy. We have advanced a cell preparation method to remove myelin debris and improve cell detection by flow cytometry in the injured spinal cord.

The ability of an OptiPrep gradient to remove myelin debris and improve immune cell detection by flow cytometry was assessed by quantifying spinal PMNs at 1 dpi (Figure 1B), the previously reported peak of PMN infiltration after SCI 1-3. Alternatively, identically dissected spinal cords were enzymatically dissociated without OptiPrep-removal of myelin debris and were similarly assessed in parallel for PMN infiltration by flow cytometry. As we have reported previously 1, there was a shift in the position of events in samples isolated with OptiPrep gradient purification method compared to enzymatic dissociation alone, demonstrating the percentage of PMNs detected in samples with intact myelin debris was only a fraction (0.5%) of the percentage of PMNs detected (5.1%) in OptiPrep purified samples (Figure 1B). These data suggest that myelin debris in tissue preparations can obscure flow cytometric readings, and demonstrate that removal of myelin debris enhances the sensitivity of immune cell detection in the injured spinal cord tissue.

Having established the sensitivity of the OptiPrep gradient system for cell detection in the injured spinal cord, we characterized changes in cellular infiltration over a period ranging from 2 hrs to 180 dpi and established a novel multiphasic response of cellular inflammation after SCI that included PMNs, macrophages/microglia and T-cells. As confirmed by previous studies 1-3, PMNs first entered the cord at 2 hrs post-injury and peaked at 1 dpi (Figure 2 & 4). Macrophages/microglia on the other hand 1,4,5, were not detected in the injured spinal cord until 3 dpi, and peaked initially at 7 dpi (Figure 3 & 4). Surprisingly, we show for the first time that macrophages/microglia peaked for the second time 60 dpi and remained elevated through 180 dpi (Figure 3 & 4). Similar to macrophages/microglia, T-cell infiltration was predicted to peak 7 dpi 5-7; however, flow cytometry did not detect any changes in T-cell number in the first 7 dpi, though an elevated number of T-cells was detected at 9 dpi (1.6%) (Figure 4). While T-cell number was decreasing by 10 dpi, a persistent T-cell response was observed through 180 dpi, at which time 4.4% of cells were labelled for CD3 (Figure 4).

Together, these data demonstrate a time-dependent multiphasic response of cellular inflammation after SCI (Figure 4); the initial phases of cellular inflammation were comprised of the early peak of PMNs 1 dpi followed by a peak of ED1+ macrophages/microglia 7 dpi and T-cells 9 dpi, while the later phases were composed of all three cellular populations rising after 14 dpi and persisting through 180 dpi, with a notable second peak of macrophages/microglia at 60 dpi. This timecourse study and the quantitative data generated by flow cytometry have been validated previously, showing comparable results to data collected from quantitative stereology of immunolabeled spinal cord sections 1.

Figure 1. OptiPrep gradient densities separate most myelin/debris from injured spinal cord tissues/cells and improve immune cell assessment by flow cytometry. (A) Myelin/debris was separated from cells (neurons, glia and immune cells) after centrifugation of dissociated spinal cord tissue through an OptiPrep gradient followed by aspiration of myelin/debris layer. (B) PMN number in the injured spinal cord, showing increased sensitivity in detecting PMNs after debris removal (Student’s t-test, p = 0.0001). All flow cytometric gates were set using labeled cells from uninjured animals; n=5 per group, mean ± SEM. 5,000 events per sample were read for all samples and the mean values of positively labeled cells were expressed as percent (± S.E.M.) of the entire sample.

Figure 3. Detection of macrophages/microglia infiltration in the injured spinal cord by flow cytometry. After a moderate (200 kd) contusion injury at T9, ED1+ macrophage/microglial number increased in the injured spinal cord starting at 3 dpi (D), peaked acutely at 7 dpi (E), dropped to low levels at 14 dpi (F), before rising to a second peak at 60 dpi (G), and remained in the injured spinal cord up to 180 dpi (H). IgG isotype control labeling of 7 dpi spinal cells (B) showed minimal antibody-labeling background and no difference to antibody-labeled cells from 2 hrs post-injured (C) or uninjured (A) animals. All flow cytometric gates were set using labeled cells from uninjured animals. 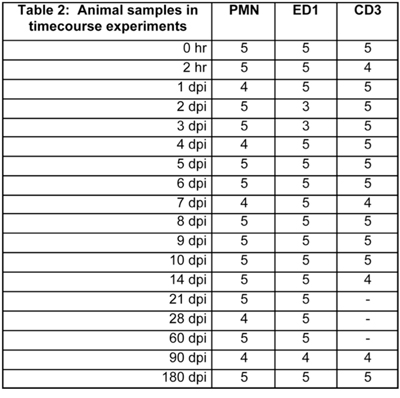 Table 2. Animal samples in timecourse experiments. For each time point (0 hr to 180 dpi), five animals received a moderate (200 kd) contusion injury at T9, and spinal cord tissues were assessed by flow cytometry for the numbers of PMNs, ED1+ macrophages/microglia, and CD3+ T-cells. However, not all animal samples were recovered successfully for PMN (4-5), ED1 (3-5), and CD3 (4-5) flow cytometric analyses. 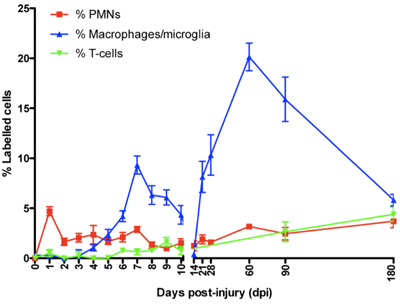 Figure 4. A timecourse of cellular inflammation in the spinal cord following a moderate (200 kd) contusion injury at T9. As assessed by flow cytometry, numbers of PMNs, ED1+ macrophages/microglia, and CD3+ T-cells peaked acutely (1,7, and 9 dpi, respectively) and persisted chronically in the injured spinal cord. n=3 to 5 per group, mean ± SEM.

The use of flow cytometry to quantify immune cells in the CNS is complicated by lipid/myelin content and debris. In addition to interfering with antibody binding and specificity, myelin debris can have similar size and granulation properties to immune cells, decreasing measurement sensitivity and accuracy 8. The novel cell preparation method described here is effective in removing myelin debris and thereby improves the sensitivity of flow cytometry to detect changes in cellular inflammation in the injured spinal cord. For instance, the removal of myelin debris by this method enhanced detection of immune cells compared to enzymatic dissociation alone.Critically, novel usage of this method allowed the first characterization of acute and chronic cellular inflammation after SCI to include a complete time course for PMNs, macrophages/microglia, and T-cells up to 180 dpi, and identified a novel second phase of cellular inflammation. These important findings of a multiphasic component of neuroinflammation may be critical for the design and implementation of rational therapeutic treatment strategies, including both cell-based and pharmacological interventions for SCI.

The OptiPrep gradient system has been used to separate debris from cells in blood 9, or purify neurons from the brain for cell culture purposes 10; however, we have modified and advanced this method system to separate myelin debris from spinal cord dissociated cells, and allowed rapid and more accurate quantification of cellular inflammation by flow cytometry. This method together with flow cytometry is likely to provide significant advancement in inflammation research after CNS injuries or pathological conditions, as most studies have only characterized cellular inflammation in the CNS using morphological and histological techniques that are not cell-type specific or cannot always provide true quantitative assessment. Furthermore, a few recent studies have attempted to quantify immune cells in the injured spinal cord by flow cytometry using fresh dissociated cord tissue 11,12 or cells separated by the Percoll gradient system 13; however, these studies have demonstrated either low cell yields or insensitive detection of immune cells.

In contrast, the OptiPrep gradient cell preparation method has provided for the first time, sensitive and reliable quantitative assessment by flow cytometry to changes of cellular inflammation in response to graded injury severity and over an extended timecourse up to 180 dpi. The sensitivity and reliability of flow cytometric analysis also depend on the specificity of antibodies used to detect specific immune cell types, as flow cytometry does not permit morphological criteria to further distinguish cell types. The specificity of antibodies for PMNs, macrophages/microglia or T-tells has been tested thoroughly in flow cytometry for peritoneal PMNs and alveolar macrophages in culture and cells in the injured spinal cord tissue 1,2. Together with the OptiPrep gradient system, these antibodies used for flow cytometry have contributed to the generation of a temporal and quantitative analysis of cellular inflammation that has provided new insight into the dynamics of the SCI microenvironment, and identified for the first time an extended multiphasic response of cellular inflammation. This multiphasic response of cells after SCI may be important to investigate the role of specific cell types present at specific times after injury or generate therapeutic interventions against specific cell types that can aggravate injuries. Furthermore, these findings may assist in the development of an appropriate rationale for the optimal drug- or cell-based interventions for SCI.

We thank Rebecca Nishi, M.S., and the technicians of the Christopher & Dana Reeve Foundation Animal Core Facility at UC Irvine for their help in animal surgery. We also thank Gabriella Funes, Usha Nekanti and Denisse Moreno for technical assistance, manuscript and video shoot preparations and animation. This research was supported by NINDS (RO1 NS43428-01 to AJA), the Paralysis Project of America (PPA-32574 to HXN), and California Institute for Regenerative Medicine (CIRM) Stem Cell Training Award T1-00008 to HXN. KDB was supported by the training program in molecular and cellular neuroscience at UC Irvine (T32 NS007444).