A procedure for liquid-based culturing and dispensing of C. elegans strains expressing fluorescent reporter proteins is described that does not require expensive sorting equipment. This approach can be applied to numerous inducible C. elegans genes for drug discovery or biosensing of contaminants.

High-throughput screening (HTS) is a powerful approach for identifying chemical modulators of biological processes. However, many compounds identified in screens using cell culture models are often found to be toxic or pharmacologically inactive in vivo1-2. Screening in whole animal models can help avoid these pitfalls and streamline the path to drug development.

C. elegans is a multicellular model organism well suited for HTS. It is small (<1 mm) and can be economically cultured and dispensed in liquids. C. elegans is also one of the most experimentally tractable animal models permitting rapid and detailed identification of drug mode-of-action3.

We describe a protocol for culturing and dispensing fluorescent strains of C. elegans for high-throughput screening of chemical libraries or detection of environmental contaminants that alter the expression of a specific gene. Large numbers of developmentally synchronized worms are grown in liquid culture, harvested, washed, and suspended at a defined density. Worms are then added to black, flat-bottomed 384-well plates using a peristaltic liquid dispenser. Small molecules from a chemical library or test samples (e.g., water, food, or soil) can be added to wells with worms. In vivo, real-time fluorescence intensity is measured with a fluorescence microplate reader. This method can be adapted to any inducible gene in C. elegans for which a suitable reporter is available. Many inducible stress and developmental transcriptional pathways are well defined in C. elegans and GFP transgenic reporter strains already exist for many of them4. When combined with the appropriate transgenic reporters, our method can be used to screen for pathway modulators or to develop robust biosensor assays for environmental contaminants.

We demonstrate our C. elegans culture and dispensing protocol with an HTS assay we developed to monitor the C. elegans cap ‘n’ collar transcription factor SKN-1. SKN-1 and its mammalian homologue Nrf2 activate cytoprotective genes during oxidative and xenobiotic stress5-10. Nrf2 protects mammals from numerous age-related disorders such as cancer, neurodegeneration, and chronic inflammation and has become a major chemotherapeutic target11-13.Our assay is based on a GFP transgenic reporter for the SKN-1 target gene gst-414, which encodes a glutathione-s transferase6. The gst-4 reporter is also a biosensor for xenobiotic and oxidative chemicals that activate SKN-1 and can be used to detect low levels of contaminants such as acrylamide and methyl-mercury15-16. 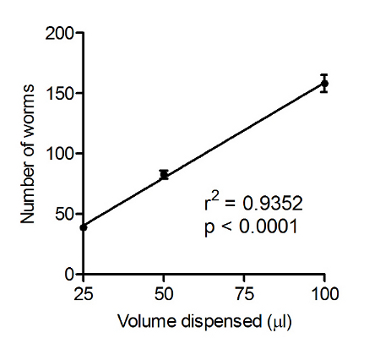 Figure 1. Number of worms versus volume dispensed. Worms were diluted to approximately 2/μl and dispensed into a 24 well plate for manual counting with a stereomicroscope. N = 8 wells per volume. 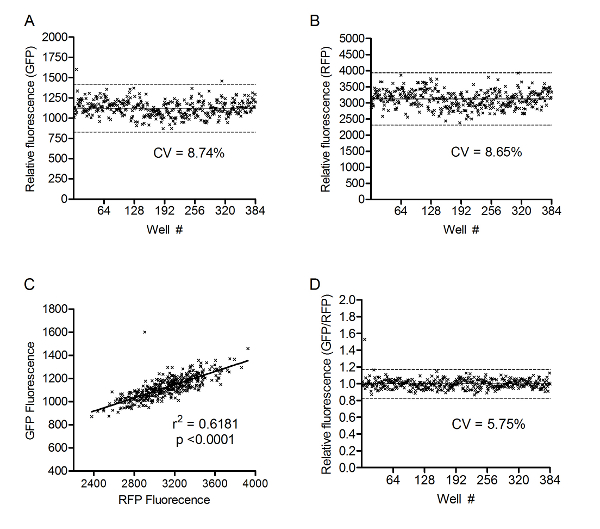 Figure 2. Total fluorescence of worms dispensed into a 384 well plate is reproducible. Worms were diluted to approximately 2.5/μl and 30 μl was dispensed into every well of a 384 well plate. GFP (A) and RFP (B) fluorescence of all wells had a coefficient of variation below 9%. (C) GFP fluorescence is highly correlated to RFP fluorescence. (D) Calculating the ratio of GFP to RFP reduced the coefficient of variation to below 6% (A, B, and D) Solid lines indicate the means and broken lines indicate three standard deviations above or below the mean. 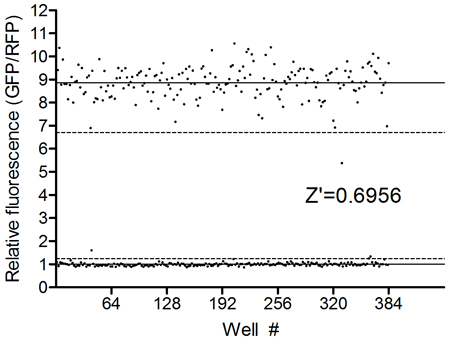 Figure 3. Activation of Pgst-4::GFP is robust and consistent. Approximately 75 L4 worms were dispensed into all wells of a 384 well plate and 38 μM juglone was added in every other column. GFP and RFP fluorescence was measured after 21 h of incubation. The mean relative fluorescence ratios of all control (1.0) and juglone wells (8.9) are marked with solid lines. Three standard deviations above the control mean and below the juglone mean are marked with broken lines.

We present a method for culturing and dispensing large numbers of transgenic nematodes. The equipment used for culturing worms is standard for laboratories performing molecular cloning and the liquid handling and fluorescence equipment is standard for laboratories processing large numbers of microplates. Other methods of dispensing large numbers of live C. elegans require expensive particle sorting equipment19. The Pgst-4::GFP assay can be used to screen for small molecule modulators of cap ‘n’ collar transcription factors and to detect xenobiotic and oxidant contaminants in environmental and food samples14,16. Robust inducible transgenic GFP reporters are available for a wide-range of pathways and environmental stimuli4, and therefore our method should be applicable to developing modulators of many pathways and to detect a broad spectrum of contaminants.

C. elegans transgenes were provided by the Caenorhabditis Genetics Center (University of Minnesota, Minneapolis, MN). This work was supported by NIH R21 grant NS0667678-01 to KS. All authors participated in the collection, analysis, and interpretation of data. CKL, KS, and KPC participated in writing and revising the manuscript. 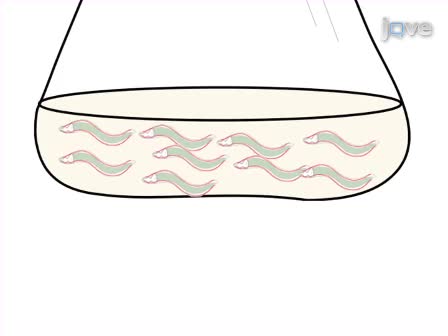