Partially isolated cortex (“undercut”) is an efficient animal model of posttraumatic epileptogenesis. Here we demonstrate how to make a novel surgical device and use it to make more precise and consistent lesions to generate this model.

Partially isolated cortex ("undercut") is an animal model of posttraumatic epileptogenesis. The surgical procedure involves cutting through the sensorimotor cortex and the underneath white matter (undercut) so that a specific region of the cerebral cortex is largely isolated from the neighboring cortex and subcortical regions1-3. After a latency of two or more weeks following the surgery, epileptiform discharges can be recorded in brain slices from rodents1; and electrical or behavior seizures can be observed in vivo from other species such as cat and monkey4-6. This well established animal model is efficient to generate and mimics several important characteristics of traumatic brain injury. However, it is technically challenging attempting to make precise cortical lesions in the small rodent brain with a free hand. Based on the procedure initially established in Dr. David Prince's lab at the Stanford University1, here we present an improved technique to perform a surgery for the preparation of this model in mice and rats. We demonstrate how to make a simple surgical device and use it to gain a better control of cutting depth and angle to generate more precise and consistent results. The device is easy to make, and the procedure is quick to learn. The generation of this animal model provides an efficient system for study on the mechanisms of posttraumatic epileptogenesis.

Coronal cortical slices can be prepared to confirm the success of the undercut surgery. In slices prepared >2 weeks after surgery, transcortical and undercut cuts are discernible under low power objective of a microscope (Fig. 2). The partially isolated cortex usually becomes slightly thinner, and epileptiform activity can be detected in majority of cortical slices with field potential recording (Fig. 3).

In contrast, formation of big holes in the white matter or in deep cortical layers, dramatic thinning of the lesioned cortex, or an errant cut being above or below white matter will make the brain unusable for further experiments. 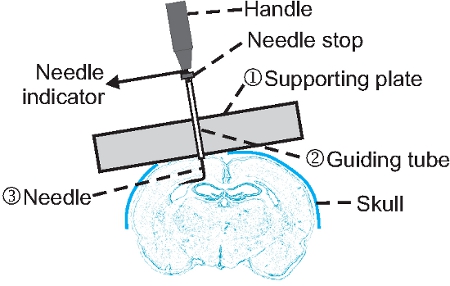 Figure 1. Structure and application of an undercut device. A guiding tube (2) is glued onto a supporting plate (1) that is made of stainless steel or transparent plastic. A syringe needle (3) is inserted through the guiding tube and bent at ~3 mm to the tip. A needle stop made of plastic tube is glued onto the upper end of the needle so that the vertical moving range of the needle is limited to ~ 1.2 mm and ~1.5 mm for use in P21 mice and rats respectively. A segment of small copper wire is fastened beneath the handle as needle indicator for the orientation of the bent needle. Note that the device is tilted and in contact with both edge of the cranial window so that a cut can be made parallel to the pial surface. 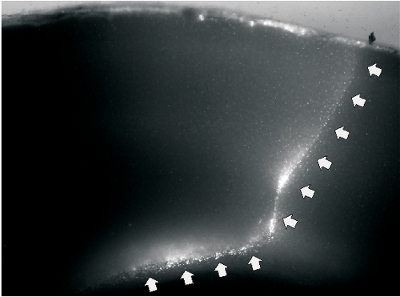 Figure 2. A representative image of undercut slice. A. Fluorescent image of a slice that was prepared two weeks after undercut lesion in a P48 rat. The cutting wound was labeled by fluorescent dye DiI. The white arrows on the right indicate transcortical cut, and the arrows on the bottom indicate undercut that passed though the border between layer IV and white matter.

The undercut model is a highly efficient system for studying posttraumatic epileptogenesis. A typical surgery takes only about 20-30 minutes to finish, and evoked or spontaneous epileptiform activity can be recorded in slices from most animals two weeks after surgery1-2. More importantly, this model mimics aspects of changes following traumatic brain injury such as bleeding, inflammation, edema, axotomy and neuronal death7. Not only has epileptiform activity been observed in rodents and other animals, but also epileptic seizures have been documented in humans who suffer comparable cortical lesions8. Significant progress has been made to elucidate the underlying mechanisms in recent years. Spontaneous and evoked interictal epileptiform discharges have been recorded in brain slices >2 weeks after the lesion, and these activities were found to originate in rat cortical layer V1. Evidence of circuit reorganization, loss of GABAergic interneurons and disinhibition, increases in neuronal membrane excitability, and increases in excitatory synaptic coupling have also been demonstrated, particularly in cortical layer V 2,9-13.

Here we introduced a novel instrument for making undercut lesions. When one performs undercut surgery with a free hand, hand shaking frequently causes difficulty in making stable and precise cortical lesions. Although practice and experience may improve the quality of the surgery, significant variability in the depth and quality of the lesions exists. The device we have introduced here is beneficial in three aspects. First, by resting on the edges of the cranial window, the device largely eliminates the problem of hand shaking during the surgery, thus making it possible to make a smooth cut through the delicate brain tissue. Second, the depth of the needle insertion and the degree of rotation can be carefully controlled, which makes it possible to cut more precisely and consistently in the white matter beneath layer VI. Third, the surface of the cortical hemisphere is curved: with the medial being higher than the lateral side (Fig. 1), which can cause missing the targeted white matter if the angle of the needle is not adjusted accordingly. By resting the device on the cranial window, the needle is tilted laterally, and the cutting angle is automatically adjusted so that the rotation of the needle is always parallel to the surface of the cortex and precise lesion is obtained (Fig. 2). One potential problem with using this device is that it may interfere with direct visualization of the needle under the microscope. This problem can be resolved by slightly tilting the device toward the caudal direction when penetrating the pial and the cortex. As soon as the needle is lowered to the white matter, the device needs to be adjusted to become vertical to the cortical surface, and rested on the skull. At this point, looking at the needle indicator is sufficient to monitor needle rotation. In summary, with these several advantages and its relative ease of construction, the undercut model will become more accessible and useful for the study of posttraumatic epileptogenesis.

This work was supported by NIH/NINDS grant 4R00 NS 057940, and grant SCBI 200-12 from the Spinal Cord and Brain Injury Research fund from the Indiana State Department of Health. 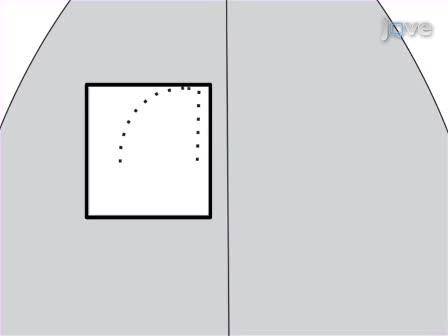