The fast-growing biopharmaceutical industry demands speedy development of highly efficient and reliable production systems to meet the increasing requirement for drug supplies. The generation of production cell lines has traditionally involved manual operations that are labor-intensive, low-throughput and vulnerable to human errors. We report here an integrated high-throughput and automated platform for development of manufacturing cell lines for the production of protein therapeutics.

The combination of BD FACS Aria Cell Sorter, CloneSelect Imager and TECAN Freedom EVO liquid handling system has enabled a high-throughput and more efficient cell line development process. In this operation, production host cells are first transfected with an expression vector carrying the gene of interest 1, followed by the treatment with a selection agent. The stably-transfected cells are then stained with fluorescence-labeled anti-human IgG antibody, and are subsequently subject to flow cytometry analysis 2-4. Highly productive cells are selected based on fluorescence intensity and are isolated by single-cell sorting on a BD FACSAria. Colony formation from single-cell stage was detected microscopically and a series of time-laps digital images are taken by CloneSelect Imager for the documentation of cell line history. After single clones have formed, these clones were screened for productivity by ELISA performed on a TECAN Freedom EVO liquid handling system. Approximately 2,000 - 10,000 clones can be screened per operation cycle with the current system setup.

This integrated approach has been used to generate high producing Chinese hamster ovary (CHO) cell lines for the production of therapeutic monoclonal antibody (mAb) as well as their fusion proteins. With the aid of different types of detecting probes, the method can be used for developing other protein therapeutics or be applied to other production host systems. Comparing to the traditional manual procedure, this automated platform demonstrated advantages of significantly increased capacity, ensured clonality, traceability in cell line history with electronic documentation and much reduced opportunity in operator error.

Document colony formation in 96-well plates on CloneSelect Imager at day 0, day 3, day 7 and day 13 after FACS sorting. The image documentation will ensure selection of clones derived from a single cell. A critical step in this documentation is getting the focal plane adjusted correctly for the day 0 measurement, since there is only one cell in each well at that point. It is very important that the images of those single cells are in focus and attempting to adjust the focus on them can be misleading at best. The focal plane can vary significantly between brands of plates and possibly even from lot to lot of the same brand. Thus a pre-determined focal plane needs to be used. This can be accomplished by focusing on test micro-beads or high density cells deposited on plates from the same lot being used. Alternatively, fully grown plates from the same lot may be used for this purpose. After FACS sorting, it is also important to let the cells settle for a minimum of 2 hours prior to imaging, so that they will be 'fixed' in position on the plate.

An example of developing antibody producing clones with the high throughput method is shown in Figure 1 and Figure 2. Transfected cell pool was stained with fluorescently labeled anti-human IgG antibody (Figure 1A), analyzed and sorted on BD FACSAria (Figure 1B). Colony formation in 96-well plate was imaged on CloneSelect Imager (Figure 1C). Cell culture supernatant was sampled from wells that contain single colony and assayed by ELISA on the TECAN Freedom EVO liquid handling system (Figure 1D). Highly productive clones were found from cells that exhibited higher surface antibody level reflected by staining with fluorescent labeled anti-human IgG. When comparing clones generated from two populations of the initial transfected cell pool, a vast difference in productivity in fed-batch culture was observed (Figure 2). For the top two clones generated from the cell population with high surface antibody expression (PE high), the specific productivity ranged from 50-70 pg/cell/day. Whereas the antibody productivity was ~20 pg/cell/day for the top two clones generated from the cell population with low surface antibody expression (PE low). Furthermore, cell lines developed by FACS sorting are more stable with respect to antibody production than those that were cloned through manual liming dilution (Figure 3A). The specific productivity of the top clone, "Clone 1", generated by manual liming dilution dropped from ~30 pcd to ~10 pcd after culturing for 80 cell doublings. On the other hand, the top subclone generated by FACS sorting, "Clone 2", was able to maintain the specific productivity around 20 pcd for at least 100 cell doublings. By fluorescent in situ hybridization (FISH), we demonstrated Clone 1 showed as a mixed population of phenotype A (85%) and phenotype B (15%). In contrast, FACS sorted clone (clone 2) showed to be a more homogeneous population, with 99.5% of the cells proved to be phenotype A (Figure 3B). 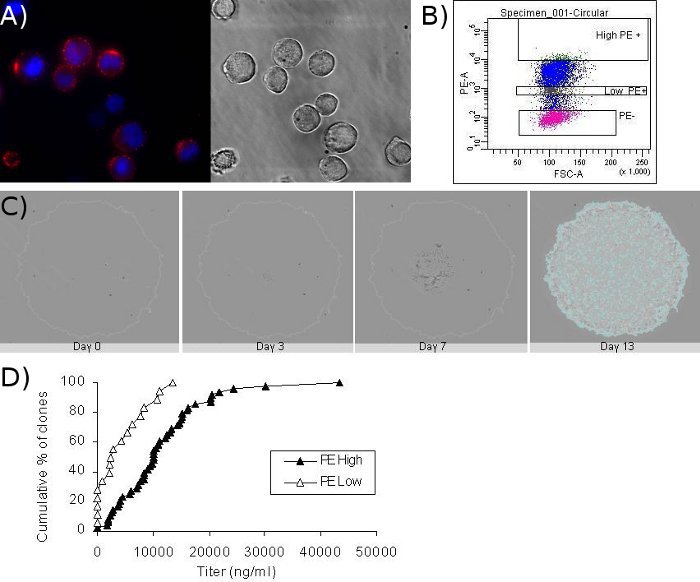 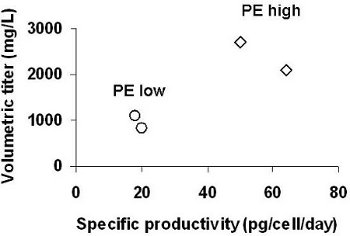 Figure 2. Surface associated antibody level correlates with antibody productivity of the cell. Clones with high and low fluorescent staining were both developed into cell lines and evaluated in fed-batch culture. Volumetric titer and specific productivity were compared between top 2 clones of each population. 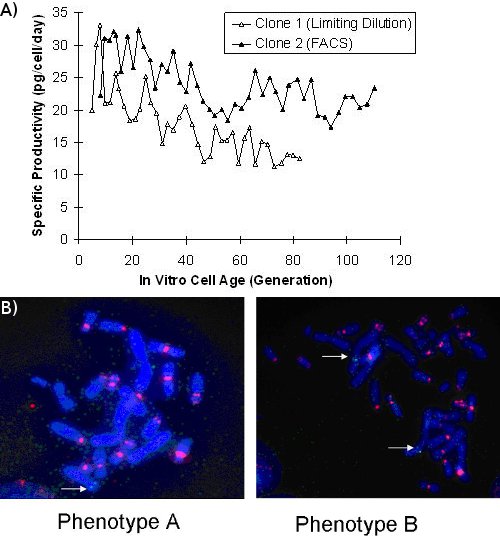 , clone was generated through FACS at 1 cell/well. B) Transgene integration site in CHO cell chromosome is identified by Fluorescent in situ hybridization.

We presented an automated manufacturing cell line development platform that enables isolation of highly productive clones, and in the mean while ensures clonality and clone stability. The engagement of surface antibody staining followed by FACSAria cell sorting is the key to obtaining single clones with high antibody productivity. Our results and other reports2-4 suggest that the antibody level transiently displayed on cell surface correlated well with productivity of the cell. Thus, a fluorescein-conjugated antibody can be used to recognize the membrane associated product and aid the isolation of high producers. Alternatively, coexpression of reporter genes and gel microdrop technology have been used to facilitate the selection of high-producing clones by FACS6-8. In addition to isolating high producing clones via FACS, other technologies have evolved to achieve the same goal. These include Trellis Bioscience CellSpot technology that uses microspere antibody detection systems and laser screening technology to identify highly productive clones and eliminate unwanted cells, Genetix ClonePix FL and StemCell Technologies ClonaCell EasyPick platform that perform high throughput screening of production cell lines using a fluorescent antibody detection system. We chose to implement the FACS cloning method based on surface associated antibody level because it combines the ease of operation, selectivity on productivity and clonality.

The employment of TECAN Freedom EVO liquid handling system significantly increased screening throughput, which provide the opportunity to select for high yield clones from a much larger cell pool. Other instrumentation for assay such as HTRF, BioForte Octet, HPLC, etc, are all possible means of selecting high producers and screening out low producers. By tracking clone formation with CloneSelect Imager, we generated necessary documentation to prove clonality with digitized cell line history. Clonality is further confirmed by genetically characterize single transgene integration site on the chromosome. A subcloning step, which is usually taken to ensure clonality, may thus be eliminated. This will save 4-8 weeks of time for cell line development. In summary, the quality cell lines generated by the high-throughput automated platform showed high productivity, production stability and documented cell line history that should meet demand for large-scale production and current regulatory requirements.

The authors of this article are employees of Merck & Co., Inc., who use this method for large scale production of protein therapeutics from mammalian cell lines. 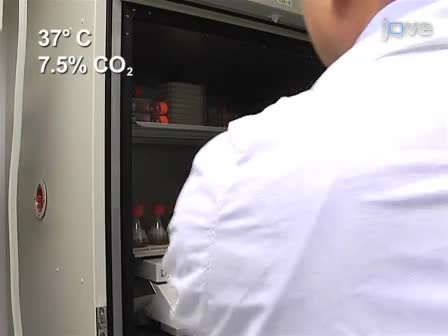