In this article, a simple, quantitative, liquid phase affinity capture assay is presented. It is a reliable technique based on the interaction between magnetic beads and tagged proteins (e.g. nanobodies) on one hand and the affinity between the tagged protein and a second, labeled protein (e.g. poliovirus) on the other.

In this article, a simple, quantitative, liquid phase affinity capture assay is presented. Provided that one protein can be tagged and another protein labeled, this method can be implemented for the investigation of protein-protein interactions. It is based on one hand on the recognition of the tagged protein by cobalt coated magnetic beads and on the other hand on the interaction between the tagged protein and a second specific protein that is labeled. First, the labeled and tagged proteins are mixed and incubated at room temperature. The magnetic beads, that recognize the tag, are added and the bound fraction of labeled protein is separated from the unbound fraction using magnets. The amount of labeled protein that is captured can be determined in an indirect way by measuring the signal of the labeled protein remained in the unbound fraction. The described liquid phase affinity assay is extremely useful when conformational conversion sensitive proteins are assayed. The development and application of the assay is demonstrated for the interaction between poliovirus and poliovirus recognizing nanobodies1. Since poliovirus is sensitive to conformational conversion2 when attached to a solid surface (unpublished results), the use of ELISA is limited and a liquid phase based system should therefore be preferred. An example of a liquid phase based system often used in polioresearch3,4 is the micro protein A-immunoprecipitation test5. Even though this test has proven its applicability, it requires an Fc-structure, which is absent in the nanobodies6,7. However, as another opportunity, these interesting and stable single-domain antibodies8 can be easily engineered with different tags. The widely used (His)6-tag shows affinity for bivalent ions such as nickel or cobalt, which can on their turn be easily coated on magnetic beads. We therefore developed this simple quantitative affinity capture assay based on cobalt coated magnetic beads. Poliovirus was labeled with 35S to enable unhindered interaction with the nanobodies and to make a quantitative detection feasible. The method is easy to perform and can be established with a low cost, which is further supported by the possibility of effectively regenerating the magnetic beads.

The principle (A) and an overview of the method (B) are depicted in Figure 1.

1. Preparation of the Buffer

2. Preparation of the Magnetic Beads

Prepare the magnetic beads according to the instruction manual. Briefly:

Note: To measure the (cosmic) background radioactivity (0% radioactivity), no radiolabeled virus is added to a control sample 1. Instead, the same volume Binding/Wash buffer is added.

Note: 100% radioactivity is defined by a control sample 2 to which all components are added except the nanobody. Instead, the same volume Binding/Wash buffer is added.

4. Measurement of the Radioactivity

6. Interpretation of the Results

Representative results for this affinity capture assay are shown in Figures 2, 3 and 4. In Figure 2, the affinity of PVSS38C, a nanobody specific for poliovirus, is shown. The affinity of PVSS38C was tested for three different antigens of poliovirus: Native-antigen (N-antigen), Heated-antigen (H-antigen) and 14S subunits. N-antigen is the intact virus that is infectious. When the virus is heated (20 minutes at 56 °C) or attached to a solid surface (unpublished results), the conformation of the capsid changes, resulting in a (partial) loss of the viral RNA and the capsid protein VP4, and empty capsids are formed which are then called H-antigens. 14S subunits are assembly intermediates. These antigens are recognized by different sets of antibodies after immunization10 and possess therefore different epitopes and antigenic sites. In the figure the percentage of radioactivity found in the supernatant is represented as a function of the concentration of nanobody. It can be seen that the radioactivity in the supernatant of the samples containing radiolabeled 14S subunits decreases with increasing concentrations of the nanobody PVSS38C. This can be translated as an increase in the amount of poliovirus 14S subunits connected to the nanobody PVSS38C and indirectly to the magnetic beads. The capturing titer (= the concentration of nanobody necessary to capture 50% of radiolabeled virus) can be graphically calculated as 0.099 nM. No affinity of PVSS38C for the N-antigenic and H-antigenic form of poliovirus is observed. From these data it is interpreted that PVSS38C is interacting with an epitope that is exclusively present on the 14S subunit and not on the two other antigenic forms of poliovirus.

To demonstrate that the loss of radioactivity from the supernatant is only due to the specific affinity of the nanobody towards its antigens, the same assay was performed with Nb1, a nanobody generated against the lrpB transcriptional regulator of Sulfolobus sulfataricus and known to have no interaction with any poliovirus antigen. The result of this assay is shown in Figure 3. All radiolabeled virus remains in the supernatants showing that there is no reactivity of Nb1 against the three antigenic forms of poliovirus.

Reproducibility of the results was tested by repeating the experiment for a total of eight times for one given nanobody (i.e., PVSP29F) at different days and by different persons. The results are shown in Figure 4. The mean value of percentage radioactivity in the supernatant was calculated for each nanobody concentration and is represented in correspondence with its standard deviation. 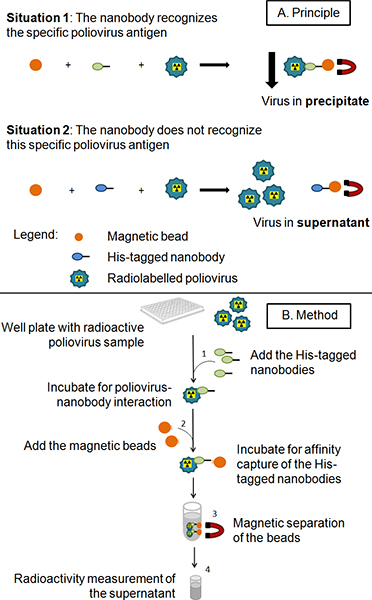 Figure 1. An overview of the principle (A) and the method (B) of the assay. A. His-tagged nanobodies that specifically recognize a certain poliovirus antigen will be able to interact with the cobalt-coated magnetic beads and will precipitate the radioactively labeled virus. B. His-tagged nanobodies are added to radioactively labeled poliovirus and incubated. Cobalt-coated magnetic beads are added and magnetic separation of the bound/unbound antigen is performed. The radioactivity of the supernatant is measured and the amount of captured antigen can be derived. 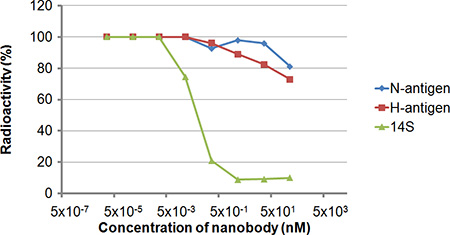 Figure 2. Magnetic beads affinity capture of different poliovirus antigens by nanobody PVSS38C. The percentage of radioactivity found in the supernatant is represented as a function of the concentration of PVSS38C. For 14S a concentration-response relationship can be found, showing the interaction of PVSS38C with an epitope exclusively present on 14S. No significant interaction with N- , nor H-antigen can be detected, although a negligible non-specific capturing at very high concentrations is noticed. 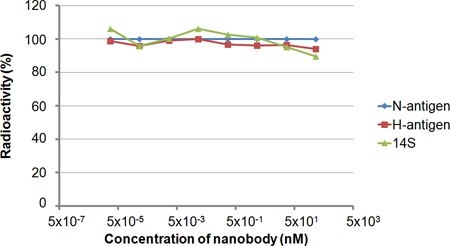 Figure 3. Magnetic beads affinity capture of different poliovirus antigens by nanobody Nb1. The percentage of radioactivity found in the supernatant is represented as a function of the concentration of Nb1. Nb1 is known to have no interaction with any poliovirus-antigen or -subunit. Since 100 % of the radioactivity is found in the supernatant, no virus was non-specifically bound to Nb1. The loss of radioactivity in figure 2 is therefore only due to the specific affinity of the nanobody towards its antigens. 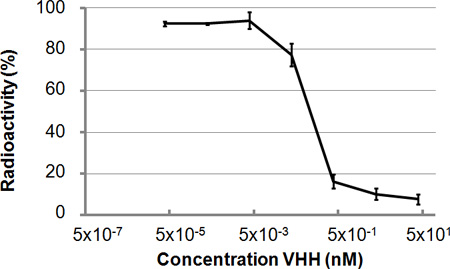 Figure 4. Reproducibility of the assay. The mean value of percentage radioactivity in the supernatant is represented as a function of the concentration of nanobody. The experiment was repeated eight times at different days and by different persons. The standard deviation is represented as vertical bars.

Apart from poliovirus, other picornaviruses are known to be sensitive to solid surface induced conformational conversion, like the economically important foot and mouth disease virus (FMDV)2. The alteration of the shape and the reduction in binding affinity of proteins in general after binding to plastics is described in literature12. The assay could therefore be used to investigate the interaction between other proteins that are sensitive to conformational changes, for epitope mapping, to define the amount of properly folded proteins, to screen for structure related impurities during production processes, for the rapid screening of batches during production, for the purification of samples that are mixtures of closely related proteins and many other applications can be thought of. The availability of different magnetic beads with affinity for different tags supports these possibilities. Although radioactive labels were used in these experiments, other signals could be implemented to detect and quantify the interactions, like fluorescent dyes13,14. Many samples can be analyzed during one experiment and it is possible to automate the method. The magnetic beads used in this assay can easily be re-used by just a boiling, stripping and regeneration step, which renders this an inexpensive method. Up to date, five of these regeneration cycles of the beads did not affect the reproducibility of the results (data not shown).

In addition, it can be considered as a specific method, since specific nanobodies are used that only recognize their antigen, as they were able to interact differently with the poliovirus N- and H-antigens and the 14S subunit.

It can be concluded that this affinity capture assay using magnetic beads is an assay with a broad range of possible applications that is reliable, simple, quantitative, specific, time-saving and inexpensive.

The authors thank the staff of the department of Pharmaceutical Biotechnology and Molecular Biology and especially Monique De Pelsmacker for the preparation of the radioactive labeled virus. We are grateful to Ellen Merckx and Hadewych Halewyck for their interesting remarks and discussions and to Gerrit De Bleeser for his help in the lab. This work was financially supported by an OZR grant of the Vrije Universiteit Brussel (OZR1807), the Fonds voor Wetenschappelijk Onderzoek Vlaanderen (G.0168.10N) and the World Health Organization (TSA 200410791). Lise Schotte is a predoctoral fellow of the Fonds voor Wetenschappelijk Onderzoek Vlaanderen (FWO). 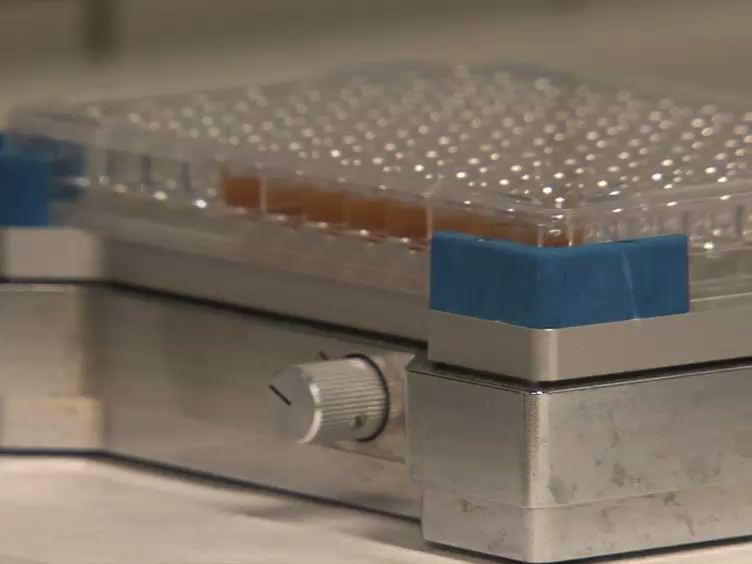