A method of visualizing and quantifying the 3-dimensional structure of mouse hepatic portal vein or intrahepatic bile duct is described. This resin cast technique can also be applied to other ductal or vascular systems and allows for in situ visualization or quantification of a system's intact communicating architecture.

In organs, the correct architecture of vascular and ductal structures is indispensable for proper physiological function, and the formation and maintenance of these structures is a highly regulated process. The analysis of these complex, 3-dimensional structures has greatly depended on either 2-dimensional examination in section or on dye injection studies. These techniques, however, are not able to provide a complete and quantifiable representation of the ductal or vascular structures they are intended to elucidate. Alternatively, the nature of 3-dimensional plastic resin casts generates a permanent snapshot of the system and is a novel and widely useful technique for visualizing and quantifying 3-dimensional structures and networks.

A crucial advantage of the resin casting system is the ability to determine the intact and connected, or communicating, structure of a blood vessel or duct. The structure of vascular and ductal networks are crucial for organ function, and this technique has the potential to aid study of vascular and ductal networks in several ways. Resin casting may be used to analyze normal morphology and functional architecture of a luminal structure, identify developmental morphogenetic changes, and uncover morphological differences in tissue architecture between normal and disease states. Previous work has utilized resin casting to study, for example, architectural and functional defects within the mouse intrahepatic bile duct system that were not reflected in 2-dimensional analysis of the structure1,2, alterations in brain vasculature of a Alzheimer's disease mouse model3, portal vein abnormalities in portal hypertensive and cirrhotic mice4, developmental steps in rat lymphatic maturation between immature and adult lungs5, immediate microvascular changes in the rat liver, pancreas, and kidney in response in to chemical injury6.

Here we present a method of generating a 3-dimensional resin cast of a mouse vascular or ductal network, focusing specifically on the portal vein and intrahepatic bile duct. These casts can be visualized by clearing or macerating the tissue and can then be analyzed. This technique can be applied to virtually any vascular or ductal system and would be directly applicable to any study inquiring into the development, function, maintenance, or injury of a 3-dimensional ductal or vascular structure.

7. Clear Liver for Visualization in situ

A successful cast of the portal vein or bile duct will show a continuous network of progressively smaller branches extending from the hilum to the liver periphery.

Figure 1 shows a portal vein cast as visualized in situ after BABB clearing. Figure 1A shows the cast of the entire left liver lobe and the shape and size of the cast. Figure 1B shows a close-up view of the same cast, demonstrating the penetration of the resin into the smallest portal vein branches at the liver periphery.

Figure 2 shows a portal vein cast that has undergone KOH maceration. Figure 2A shows the entire left liver lobe and Figure 2B is a close up of the small peripheral branches.

This technique has also been successfully applied to the intrahepatic bile duct and published using both the BABB clearing and KOH maceration techniques1,2,7.

Figure 2. Tissue-macerated resin cast of hepatic left lobe portal vein. A. Resin cast of whole liver lobe shows many branches of varying sizes. B. Close-up shows small branches in periphery of liver. Feathering appearance of small branches represents resin filling of sinusoidal spaces and may or may not be visible on resin casts and will increase the apparent branch density if present. Resin is white in color. Scale bar = 1 mm. 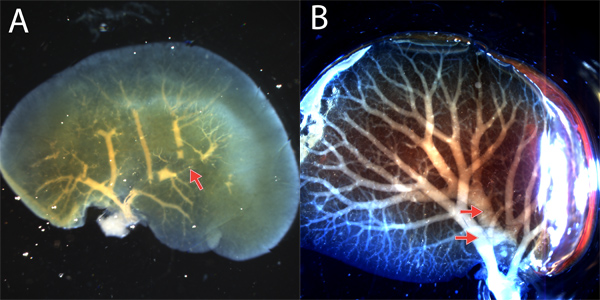 Figure 3. Common problems with resin casts. A. An incomplete fill of the left lobe portal vein is apparent by some or all cast branches failing to extend to the liver periphery. This cast also displays bubbles, visible as breaks in the continuous cast (arrow). B. Due to the proximity of the portal vein and central vein branches in some places, the portal vein resin will often enter and fill the central vein. This can be recognized when there are two distinct hilar branches (arrows) and two branching structures that have different patterns and overlap. Discriminating between technical errors and true morphological alterations can be done in two ways. First, the cast structure should be compared to the structure expected based on 2-dimensional analysis or other methods. Second, it is important to perform several replicates, and when possible, quantify the structure and perform statistical analysis to determine reproducibility and if there is a statistically significant morphological alteration between and within different experimental and control arms.

We have described specific examples for how the portal vein and intrahepatic bile duct systems of the liver can be cast, but this technique can be applied to virtually any other ductal or vascular system with slight adaptations. Previous work has demonstrated the feasibility of this technique in multiple species, including mouse1,2,7-9, duckling10,11, rabbit12,13, dog14, and pig15, and in many organs, including nasal gland14, heart16, bladder12,13, and liver1,2,7,8. These casts can be used to compare multiple systems (for example, the portal vein and bile duct) within the same tissue, the same structure across different developmental stages5, or the effect on a structure of genetic or environmental alterations or influences1-4,6,7. The wide application of this technique across species and organs makes resin casting a highly valuable tool for studying the morphology of vascular and ductal structures and has the potential to greatly increase our knowledge of the normal function of these structures as well as how they are affected, or how they affect an organ, in animal disease models.

The use of resin to create 3-dimensional casts provides a permanent snapshot of a ductal or vascular system and has several advantages over similar techniques. First, the cast can be analyzed as a stand-alone structure after maceration, offering an advantage over India ink or similar ink injections. Second, the permanence of the structure increases the ease of analysis. Last, the ability of the Mercox II resin to withstand the BABB clearing procedure allows for a unique ability to visualize a structure in situ even within large or dense tissues.

There are several types of resin available with different characteristics. Mercox II has been chosen for this technique for its many advantages; Mercox II has low viscosity, allowing it to penetrate small peripheral portal vein and bile duct branches, it has quick and complete curing at room temperature, essential for analyzing the stand-alone macerated cast, it has minimal shrinkage when cured, and it withstands BABB tissue clearing. Another type of resin, Microfil (Flowtech, Carver, MA), has been used in several published studies8,9,15. Comparatively, Microfil does not cure completely at room temperature and is best visualized through tissue clearing. Microfil casts of the portal vein have previously been analyzed through 10% formalin fixation and subsequent clearing with ethanolmethyl salicylate8.

Resin additives can provide additional methods of cast visualization; addition of colored dyes, fluorescent molecules, or microspheres can enhance analysis. Consideration must be taken, however, to ensure that the dye molecules chosen are small enough to penetrate the intended vascular or ductal structure, that they do not significantly alter the properties of the resin, that they are able to withstand either tissue clearing or maceration, and that they are compatible with the desired method of analysis. Choosing resin additives will depend greatly on the specific application: for example, microspheres (Molecular Probes) are too large to pass through the hepatic sinusoids, making them unsuitable for the study of normal sinusoidal architecture but a perfect tool to investigate the development of portosystemic shunts, which are large enough to accommodate microspheres, in a genetically altered mouse model8.

Finally, resin cast analysis can be performed in either cleared or macerated casts. BABB-cleared casts are useful to measure the structure of a system as it relates to the organ within which it resides. KOH-macerated casts can be analyzed in multiple ways. Previous studies have used scanning electron microscopy (SEM) to visualize microcirculation networks and vessel structure12,13,17. Casts can also be quantified for branch number, diameter, and volume with use of microcomputed tomography (microCT)1,15,18, 19,20.

This work was supported by grants from the National Institutes of Health (NIH) to S.S.H. (R01-DK078640), from the Howard Hughes Medical Institute (HHMI) through the HHMI/Vanderbilt University Certificate Program in Molecular Medicine to T.J.W. (GRDOT56006779), the Vanderbilt Diabetes Research and Training Center (P30-DK020593) and the Vanderbilt Digestive Disease Research Center (P30-DK058404) providing Core Services. 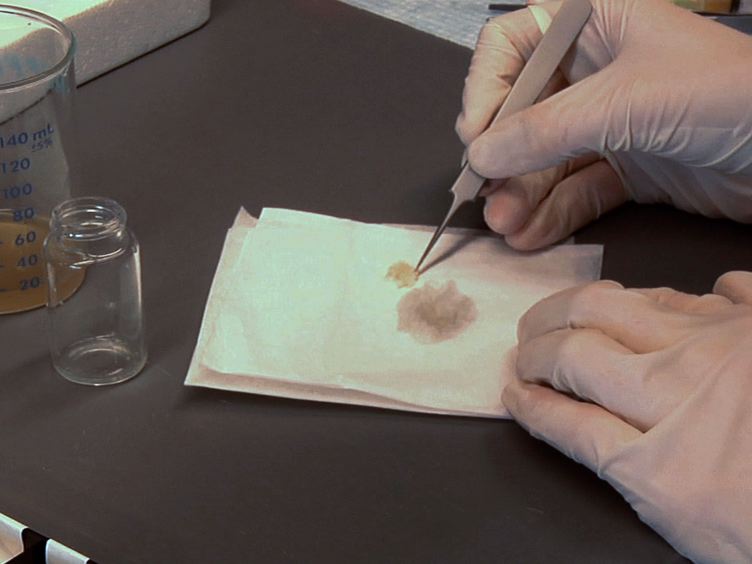