This method investigates the platelet-mediated clumping phenotype of Plasmodium falciparum-infected erythrocytes (pRBC) in clinical isolates. This is performed by isolating and co-incubating platelet-rich plasma and a suspension of pRBC.

P. falciparum causes the majority of severe malarial infections. The pathophysiological mechanisms underlying cerebral malaria (CM) are not fully understood and several hypotheses have been put forward, including mechanical obstruction of microvessels by P. falciparum-parasitized red blood cells (pRBC). Indeed, during the intra-erythrocytic stage of its life cycle, P. falciparum has the unique ability to modify the surface of the infected erythrocyte by exporting surface antigens with varying adhesive properties onto the RBC membrane. This allows the sequestration of pRBC in multiple tissues and organs by adhesion to endothelial cells lining the microvasculature of post-capillary venules 1. By doing so, the mature forms of the parasite avoid splenic clearance of the deformed infected erythrocytes 2 and restrict their environment to a more favorable low oxygen pressure 3. As a consequence of this sequestration, it is only immature asexual parasites and gametocytes that can be detected in peripheral blood.

Cytoadherence and sequestration of mature pRBC to the numerous host receptors expressed on microvascular beds occurs in severe and uncomplicated disease. However, several lines of evidence suggest that only specific adhesive phenotypes are likely to be associated with severe pathological outcomes of malaria. One example of such specific host-parasite interactions has been demonstrated in vitro, where the ability of intercellular adhesion molecule-1 to support binding of pRBC with particular adhesive properties has been linked to development of cerebral malaria 4,5. The placenta has also been recognized as a site of preferential pRBC accumulation in malaria-infected pregnant women, with chondrotin sulphate A expressed on syncytiotrophoblasts that line the placental intervillous space as the main receptor 6. Rosetting of pRBC to uninfected erythrocytes via the complement receptor 1 (CD35)7,8 has also been associated with severe disease 9.

One of the most recently described P. falciparum cytoadherence phenotypes is the ability of the pRBC to form platelet-mediated clumps in vitro. The formation of such pRBC clumps requires CD36, a glycoprotein expressed on the surface of platelets. Another human receptor, gC1qR/HABP1/p32, expressed on diverse cell types including endothelial cells and platelets, has also been shown to facilitate pRBC adhesion on platelets to form clumps 10. Whether clumping occurs in vivo remains unclear, but it may account for the significant accumulation of platelets described in brain microvasculature of Malawian children who died from CM 11. In addition, the ability of clinical isolate cultures to clump in vitro was directly linked to the severity of disease in Malawian 12 and Mozambican patients 13, (although not in Malian 14).

With several aspects of the pRBC clumping phenotype poorly characterized, current studies on this subject have not followed a standardized procedure. This is an important issue because of the known high variability inherent in the assay 15. Here, we present a method for in vitro platelet-mediated clumping of P. falciparum with hopes that it will provide a platform for a consistent method for other groups and raise awareness of the limitations in investigating this phenotype in future studies. Being based in Malawi, we provide a protocol specifically designed for a limited resource setting, with the advantage that freshly collected clinical isolates can be examined for phenotype without need for cryopreservation.

Platelets can be easily activated through temperature, agitation or storage and therefore they should be handled with care. The use of vacutainers to collect blood for platelet preparation is unavoidable in most clinical situations, but should be carefully considered as suction can potentially cause platelet activation. Due to the clinical protocol used at our research hospital, our samples are carefully collected in sodium citrate vacutainers. We have not experienced any problems with premature platelet activation in this or our previous study 12. We collect blood for platelet preparation from blood group O+ individuals to minimize nonspecific blood group antigen aggregation. Donors have also not taken medication in the previous 7-10 days as some drugs are known to influence platelet function.

4. Purification and Synchronization of Asexual Stages

The purification of mature P. falciparum pRBC is a required step for the clumping assay. Indeed, only mature parasites are capable of binding to platelet receptors as it is at this life cycle stage that the relevant ligands are expressed and protrude from the surface of infected erythrocytes. There are several methods to purify and synchronize asexual stages of P. falciparum.: Late asexual stages can be enriched by Percoll gradient 19; magnetic cell sorting 20 or using the gelatin sedimentation 21 protocol described here. Sorbitol-synchronization selects for ring stages 22, after which the rings are cultured for 24-26 hr to obtain mature stages (with no need to perform gelatin flotation).

Random formation of small pRBC clumps of 4.7±1.6 pRBCs/clump occur after 30 min. The clump size significantly increases to an average of >15 pRBC/clumps after incubation for 120 min with some clumps containing numerous pRBC/clump that could not be visually counted. The frequency of the clumping phenotype is calculated as the number of infected cells present in clumps/1,000 infected cells, counted in duplicate assays. 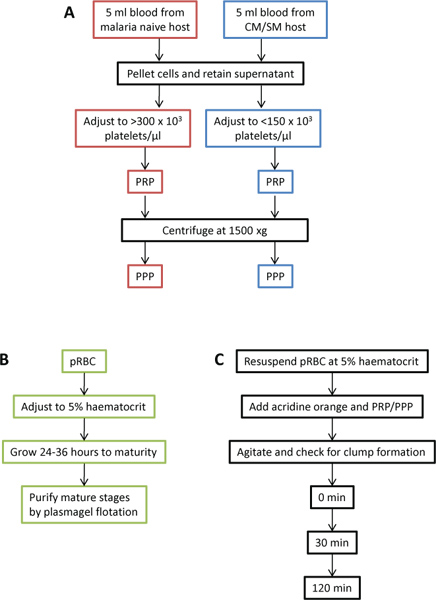 Figure 1. Work flow for clumping experiment. Platelet rich and poor plasma (A) and a P. falciparum-infected erythrocyte culture (B) are prepared and then combined for the clumping assay (C).

Figure 2. Clumping of erythrocytes infected by P. falciparum laboratory isolate. Clumps formed by HB3 at time 0, 30 and 120 min in platelet-rich plasma (A) and poor clump formation in platelet poor plasma (B).

There are limitations that specifically affect platelet function or influence outcome and most of these have already been highlighted by Arman and Rowe 15. Here we mention some of the potential problems that might be encountered at different stages of the assay:

We have described a platelet-mediated clumping assay used for studying pRBC in clinical isolates directly in the field. Platelet-mediated clumping, a characteristic behavior in P. falciparum clinical isolates, has been identified as a distinct adhesive phenotype, frequent in CD36-binding isolates 12,23-24. We have used this assay to identify three main points: 1) a strong in vitro clumping phenotype of P. falciparum isolated from Malawian children that is associated with disease severity and diagnosis 2) novel receptor P-selectin mediaties clumping on platelets together with CD36, 3) the degree of thrombocytopenia present in patients with CM is sufficient to limit the further formation of pRBC clumps in vitro 12. The involvement of platelets in clump formation is demonstrated by examining a wet-slide preparation as described in section 6. Platelets can be isolated from PRP by centrifugation at high speeds in order to minimize blood group antigenic reactions; however, we used whole PRP in order to minimize premature platelet activation from excessive handling and from the high-speed centrifugation. Platelet activity can be measured by platelet aggregation test using weak platelet agonists, epinephrine or adenosine diphosphate (ADP) 25 as described in 26.

There are several aspects of the assay that have previously been poorly characterized, one of them being the importance of selecting PRP sources and the effect of blood antigen groups on the outcome of the assay. We prepared PRP from individuals who were blood group O+ and had not taken any medication in the last 7-10 days before blood is drawn as some pharmaceuticals can affect platelet behavior.

Other factors that may affect clumping success include pRBC haematocrit, parasitaemia levels and length of the clumping assay. Using high haematocrit and platelet count it would be difficult to tell whether the cluster is truly a clump or whether too many cells are merely sitting together because they are densely packed 15. Clumping also generally increases with longer incubation times. These are all useful guidelines that should be considered when designing clumping studies.

We find that samples from different clinical groups can be analyzed in parallel using PRP from the same donor if it is possible to do so, but in limited resource settings such as field sites the transfusion pool is generally limited. It is therefore difficult to have a single O+ donor to standardize the assays. We therefore identified several O+ donors to ensure blood group compatibility wherever possible. Using multiple donors is also helpful in cases of large samples sizes so that burden of blood donation does not fall on only one individual.

Sampling points at 15-20 min are much more feasible if a single person is conducting the assays, allowing for wet-slide preparations and performing assay kinetics without sampling times overlapping. Most of the microscopic data is visual and somewhat objective; therefore, it is important that cell counting is verified by more than one person. In that case, handling one sample at a time can allow complete analysis of three to four samples a day depending on personal efficiency.

Platelet-mediated clumping can be performed using both clinical and laboratory isolates. For laboratory lines, it is recommended that CD36 binding parasites are used to maximize clumping frequencies. The assay can be coupled with other agglutination assays such as rosetting or used in clumping inhibition assays that would enable the study of receptors on the platelets that may mediate pRBC binding, a poorly understood and examined aspect of this phenotype. 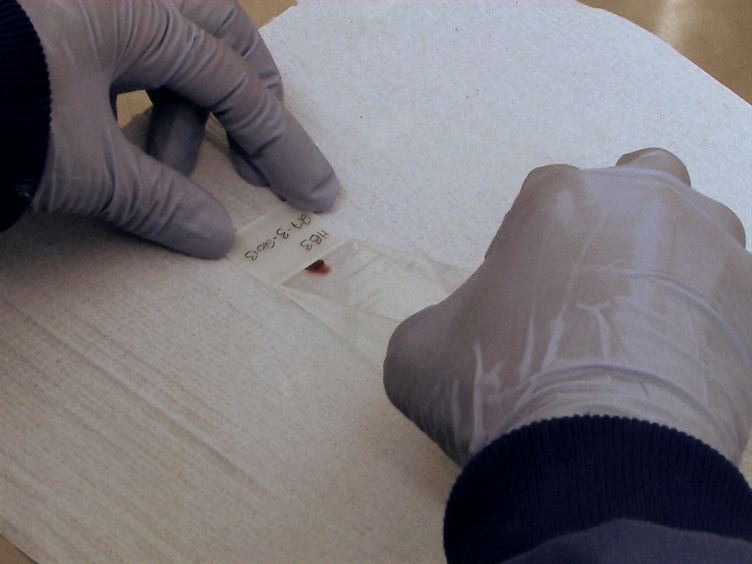