We describe the protocol to perform a cardiac stress test induced by dobutamine and monitored by cardiac catheterization in normal mice. Also we show its application to unmask subclinical cardiac disease in high fat diet-induced obese mice.

Dobutamine is a β-adrenergic agonist with an affinity higher for receptor expressed in the heart (β1) than for receptors expressed in the arteries (β2). When systemically administered, it increases cardiac demand. Thus, dobutamine unmasks abnormal rhythm or ischemic areas potentially at risk of infarction.

Monitoring of heart function during a cardiac stress test can be performed by either ecocardiography or cardiac catheterization. The latter is an invasive but more accurate and informative technique that the former.

As expected, in normal mice we observed a dobutamine dose-related increase in HR, dP/dtmax and dP/dtmin. Moreover, at the highest dose tested (12 ng/g/min) the cardiac decompensation of high fat diet-induced obese mice was unmasked.

The arterial pressure signal is defined by systolic and diastolic pressure. When the pressure sensor is inside the left ventricle, its pressure (LVP) waveform is characterized by a drop to zero of the diastolic pressure and the appearance of the left atrial contraction before ventricle contraction (Figure 1). At baseline condition, ketamine-xylazine anesthetized normal mice had HR of 280 ± 24, Pmax of 107 ± 8, Pmin of 5 ± 1, EDP of 14 ± 2, dP/dtmax of 6081 ± 365 and dP/dtmin of 5230 ± 526.

As seen in Figure 2, in normal mice LVP and HR progressively increased along dobutamine infusion, and normalized after stopping the infusion. As expected, all the hemodynamic parameters assessed also increased in a dobutamine dose-dependent way (Figure 3). Thus, dobutamine chronotropic (HR increase) and positive inotropic (LVP and dP/dtmax increase) effects are evidenced.

Compared to normal mice, in high fat diet-induced obese mice we observed a lower increase of HR and dP/dtmax when cardiac stress is induced, been statistically significant at the highest dobutamine doses tested (Figure 4). These differences were not observed at baseline conditions (0 ng/g/min). 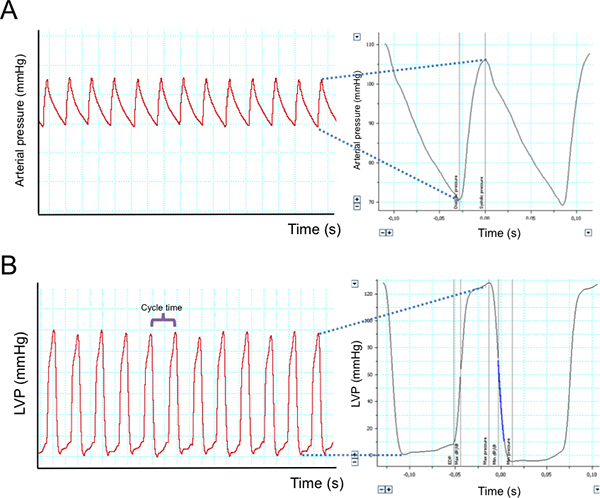 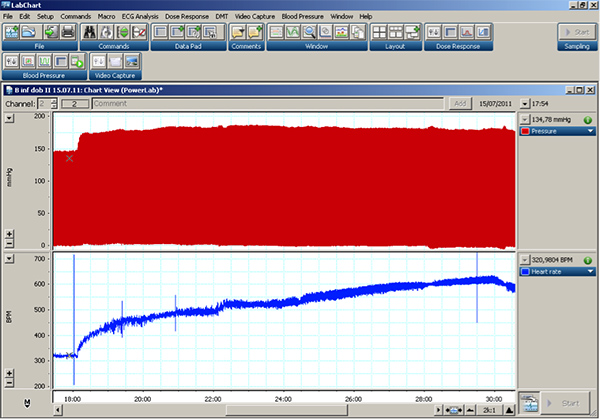 Figure 2. LVP (A) and HR (B) registers during dobutamine infusion in normal mice. Representative data of 5 animals. 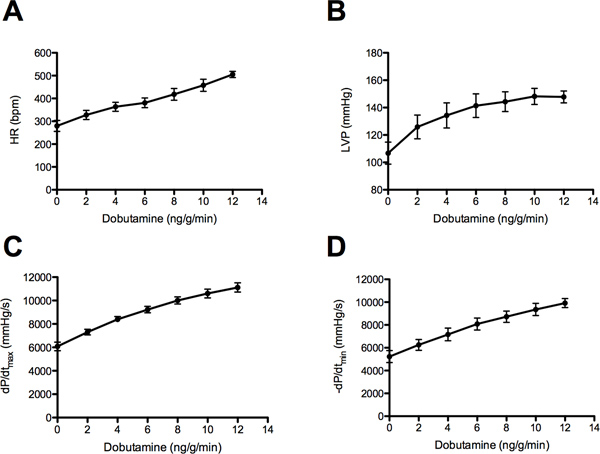 Cardiac stress test induced by dobutamine and monitored by cardiac catheterization is laborious. Nonetheless, following the protocol here describe and with a short time of training, it is possible to assess six hemodynamic parameters in a single experiment that last approximately one hour.

To minimize the impact of the depressive effect of anesthesia, hypothermia and hypoxia should be prevented and, if necessary, corrected. Respiratory rhythm should be keep regular because deep or irregular breathing affects LVP recording.

Dobutamine doses used should be adjusted according to the: i) route of administration (intravenously: 0.5 to 40 ng/g/min7,8; intraperitoneally: 1 to 1.5 μg/g/min9,10), ii) magnitude of cardiac dysfunction and iii) ethiology of cardiac alteration.

And last but not least, three practical advices: i) in animals with abundant adipose tissue surrounding the jugular vein, allow a small amount of blood to come out, in order to detect the incision borders; ii) keep the working area moisten because the cannulation procedure is simpler when the catheter is well lubricated; iii) tagging the catheter facilitates its visualization under the microscope. 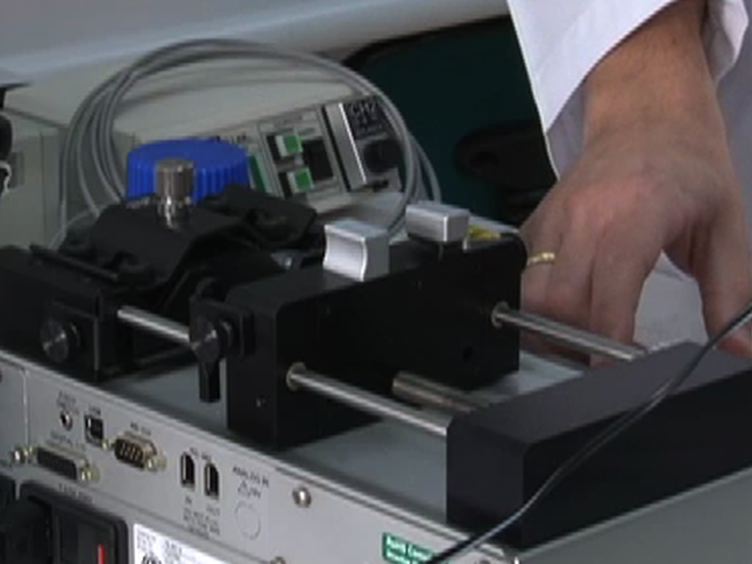