Here we present a protocol to co-culture in three-dimensions, which is useful for investigating multicellular interactions and extracellular matrix-dependent modulation of cancer cell behavior. In this experimental model, cancer cells are cultured on collagen gels embedded with human cancer-associated fibroblasts.

Cancer progression (initiation, growth, invasion and metastasis) occurs through interactions between malignant cells and the surrounding tumor stromal cells. The tumor microenvironment is comprised of a variety of cell types, such as fibroblasts, immune cells, vascular endothelial cells, pericytes and bone-marrow-derived cells, embedded in the extracellular matrix (ECM). Cancer-associated fibroblasts (CAFs) have a pro-tumorigenic role through the secretion of soluble factors, angiogenesis and ECM remodeling. The experimental models for cancer cell survival, proliferation, migration, and invasion have mostly relied on two-dimensional monocellular and monolayer tissue cultures or Boyden chamber assays. However, these experiments do not precisely reflect the physiological or pathological conditions in a diseased organ. To gain a better understanding of tumor stromal or tumor matrix interactions, multicellular and three-dimensional cultures provide more powerful tools for investigating intercellular communication and ECM-dependent modulation of cancer cell behavior. As a platform for this type of study, we present an experimental model in which cancer cells are cultured on collagen gels embedded with primary cultures of CAFs.

Cancer tissue can be perceived as a type of organ, which evolves through close interactions between the cancer and the tumor stromal microenvironment, composed of cancer-associated fibroblasts (CAFs), immune cells, tumor vessels and the extracellular matrix (ECM). CAFs are the major source of soluble factors (cytokines, growth factors and chemokines) that exert mitogenic, pro-migratory and pro-invasive effects on cancer cells. They also stimulate tumor vessel formation and recruit precursor cells, such as bone marrow-derived cells (BMDC). Activated CAFs are involved in the production and remodeling of the ECM, thereby promoting the growth and spread of cancer cells1. CAFs also provide a niche that facilitates tumor cell colonization and metastasis and are capable of conferring stem cell phenotypes onto neighboring cancer cells. Pathological observations suggest that stromal reactions or fibrotic changes in cancer tissues are indicative of a poor prognosis. Recent studies have also demonstrated that tumor stromal features, such as the gene signature, can predict patient prognosis. Furthermore, CAF-derived factors can modulate sensitivity to chemotherapy, highlighting the role of CAFs in determining drug sensitivity and resistance2.

As CAFs play a multifaceted role in the promotion of tumor progression through signaling pathways that mediate interactions between CAFs and different cell types within the tumor microenvironment, they have attracted increasing attention as novel targets for cancer therapies. The heterogeneity of the cell populations within the cancer microenvironment presents an obstacle for targeting CAFs. Several markers for CAFs have been proposed, such as α-smooth muscle actin (α-SMA), fibroblast activation protein (FAP), and fibroblast specific proten-1 (FSP-1: also called S100A4); however, these molecular markers are not specific for distinguishing CAFs from other cells present in non-cancerous tissues3. Therefore, further studies are needed to obtain more knowledge about the specific properties of CAFs. To this end, it is informative to characterize primary cultured CAFs compared with patient-matched normal fibroblasts.

Recently, analyses on patient-derived CAFs have been reported in several cancer types, revealing unique gene expression patterns and cell behaviors compared with fibroblasts derived from non-cancerous tissues. Using isolated CAFs from human lung cancer tissues, we developed a three-dimensional co-culture method, enabling us to evaluate the properties of lung CAFs. In this model, we investigated the effects of the CAFs on lung cancer cell invasion, proliferation and collagen gel contraction, which experimentally recapitulated the tumor-promoting roles of lung CAFs4.

NOTE: This study was approved by the appropriate Ethics Committees.

This co-culture method, mimicking the tumor microenvironment, is a useful tool to investigate the interactions between cancer cells and fibroblasts embedded in collagen gels. In the previous study, three parameters were evaluated in this experimental model: collagen gel contraction, cancer cell invasion and morphological change. Cancer cell proliferation was also estimated using Ki67 immunostaining4. Lung tissue samples were collected from cancerous and non-cancerous sections of a resected lung lobe (Figure 1A). Samples were minced into small pieces and cultured in DMEM supplemented with 10% FBS (Figure 1B). Fibroblasts growing out of the tissue section were observed under the microscope (Figure 1C). Primary cultured lung fibroblasts were embedded into a collagen gel (Figure 2A, a) and A549 lung cancer cells were co-cultured on the gel (Figure 2A, b). After floating culture in the medium (Figure 2A, c), the gel was further cultured under the condition of air-liquid interface (Figure 2A, d). The gel was fixed in formalin and used for immunohistochemical analyses (Figure 2A, e). For air-liquid interface culture, the gel was placed on a mesh in a well of 6-well plate (Figure 2B). Histological analyses of the gel revealed invasion of A549 cells into the collagen gel embedded with lung cancer-associated fibroblasts (Figure 3). 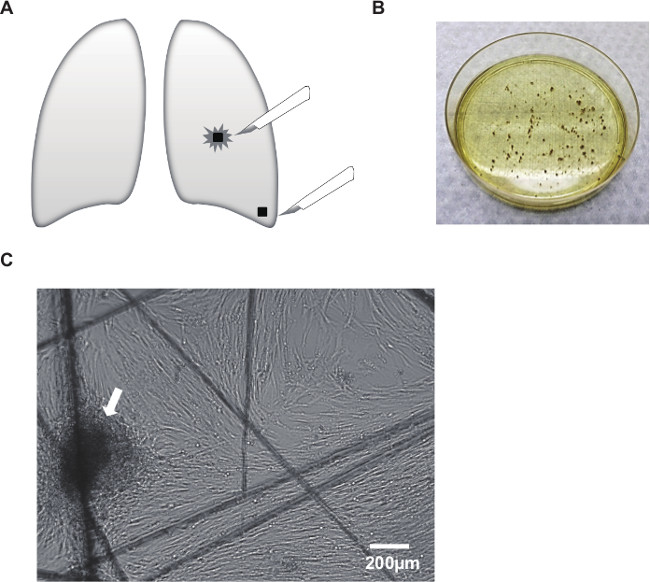 Figure 1: Outgrowth of fibroblasts from surgically resected human lung tissue. (A) Samples were collected from cancerous and non-cancerous sections of a resected lung lobe. (B) Samples were minced into small pieces and cultured in DMEM supplemented with 10% FBS. (C) Fibroblasts grew out of the tissue section (arrow). Note that the cells migrated along the scratches made by the scalpel blades on the culture dish. Scale bar, 200 μm. 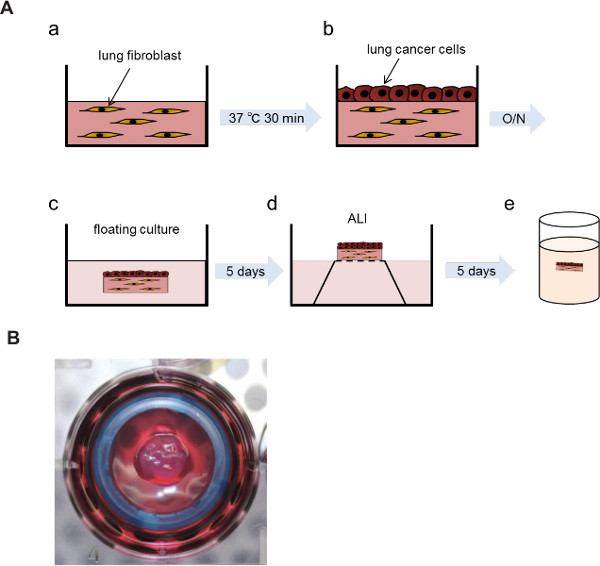 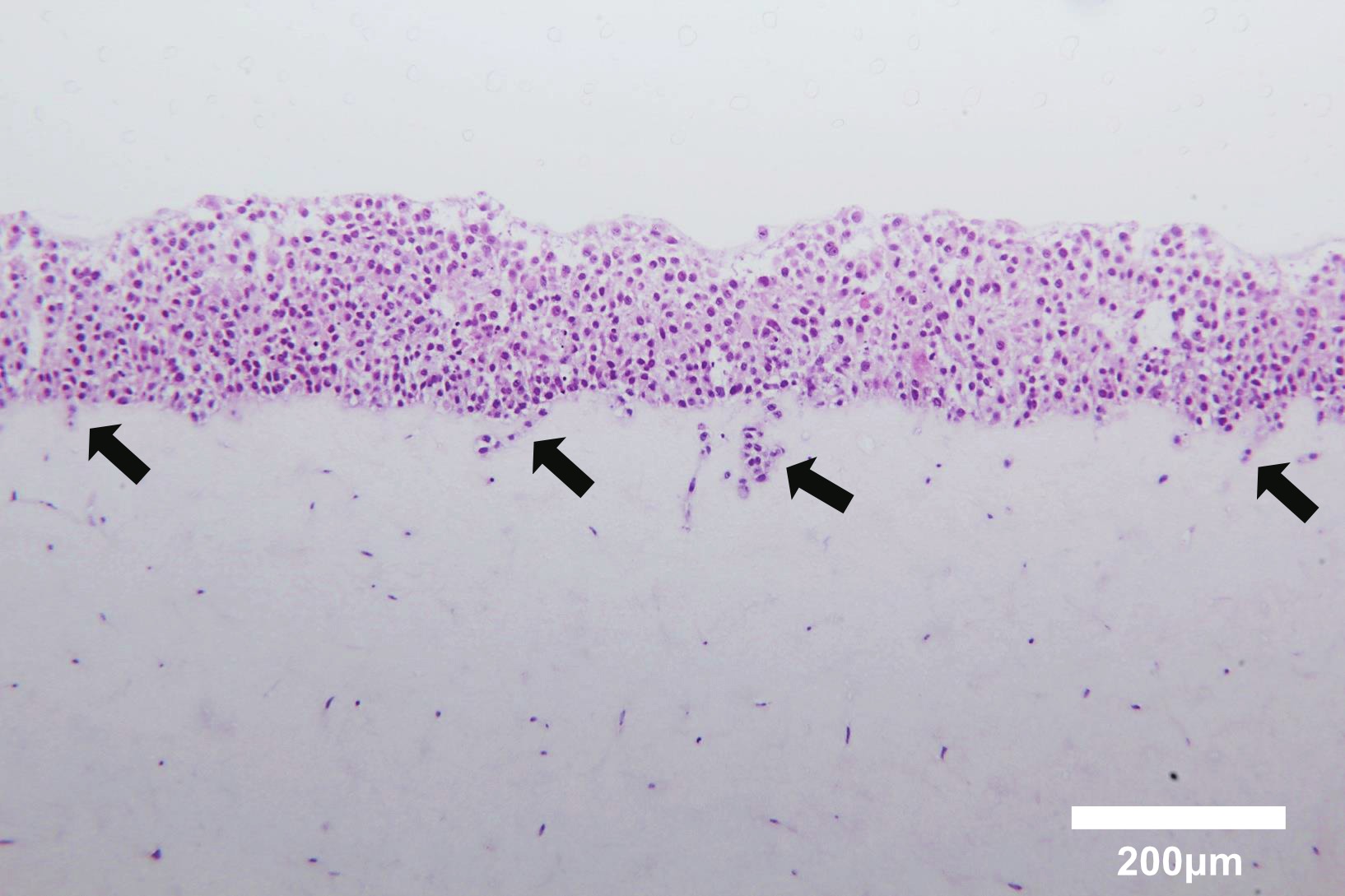 Figure 3. Hematoxylin and eosin staining of cross-sections of a three-dimensionally cultured gel composed of A549 cells and human lung fibroblasts. Note that A549 cells cultured on the collagen gel invaded the gel embedded with fibroblasts (arrows). Scale bar, 200 μm. Please click here to view a larger version of this figure.

CAFs form a major component of the ECM surrounding cancer cells and not only provide a scaffold for the tumor, but also actively participate in tumor development7. Accumulating evidence unravels the impact of CAFs or their related molecules on the eventual prognosis, highlighting the critical roles of CAF-mediated tumor progression8.

In the previous study, we employed outgrowth method to isolate lung CAFs4. In this experiment, the maintenance of tissue section adhesion onto the dish surface is critical. Cells are unable to migrate out from tissue sections floating in the culture medium, and once the tissue sections become detached from the surface, they can no longer be used for cell outgrowth on the same culture dish. Cutting of the tissue yields exudates, which serve as a glue for attachment to the dish surface. When fixing the tissue section with a cover slip, the amount of grease used is also critical. Small amounts of grease fail to keep the cover slip attached, while excessive grease obscures the cell culture area. Attachment of tissue sections using a cover slip and the appropriate pressure is also a key to facilitating cell outgrowth.

Our co-culture model serves as a platform to evaluate tumor-stromal interactions under conditions mimicking the tumor microenvironment. Cells with specific gene overexpression or knockdown are easily applicable in our culture system, which is an advantage over organotypic culture. Notably, our previous observations suggested that co-cultured fibroblasts actively modulate cancer cell differentiation and invasion4. It would be of interest to test possible multicellular interactions in our experimental setting, such as endothelial cells, inflammatory cells and non-cancerous epithelial cells.

Distinct characteristics of CAFs have been demonstrated in co-culture studies or by gene expression profiling, using primary CAF cultures and their normal counterparts9. On the other hand, these studies have also shown intra-tumoral or inter-individual heterogeneity of CAFs10, part of which might be attributable to different levels of growth factor signalling11 or transcription factor activation12. Thus, it is essential to further characterize heterogeneous CAFs derived from cancer patients13. Following repeated cell passages, the characteristics of primary cultured CAFs may be modified. Therefore, it would be better to characterize CAFs at early passages.

CAFs contribute to ECM deposition and remodeling, which in turn, may activate CAFs through tension-triggered cell signaling. Such a mechanotransduction-mediated feed-forward loop of CAF activation has been suggested14, and our collagen gel contraction model may provide insights into these mechanisms. The mechanisms of collagen gel contraction include cell contraction, proliferation, migration, differentiation, and collagen remodeling15. Detailed histological studies and experiments using ligands, inhibitors, or RNAi may be helpful to gain a mechanistic insight into tumor-stromal interactions. 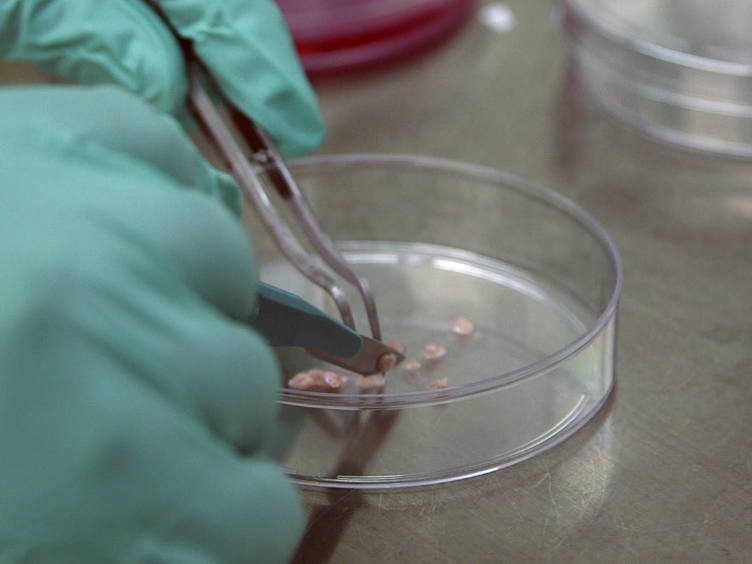