Myocardial infarction (MI) is not only followed by impaired cardiac function but also by apoptosis in the amygdala, a brain region involved in the behavioral consequences of MI. This protocol describes how to induce MI, collect amygdala tissue and measure caspase-3 activity, a marker of apoptosis, therein.

Myocardial infarction (MI) has dramatic mid- and long-term consequences at the physiological and behavioral levels, but the mechanisms involved are still unclear. Our laboratory has developed a rat model of post-MI syndrome that displays impaired cardiac functions, neuronal loss in the limbic system, cognitive deficits and behavioral signs of depression. At the neuronal level, caspase-3 activation mediates post-MI apoptosis in different limbic regions, such as the amygdala – peaking at 3 days post-MI. Cognitive and behavioral impairments appear 2-3 weeks post-MI and these correlate statistically with measures of caspase-3 activity. The protocol described here is used to induce MI, collect amygdala tissue and measure caspase-3 activity using spectrofluorometry. To induce MI, the descending coronary artery is occluded for 40 min. The protocol for evaluation of caspase-3 activation starts 3 days after MI: the rats are sacrificed and the amygdala isolated rapidly from the brain. Samples are quickly frozen in liquid nitrogen and kept at -80 °C until actual analysis. The technique performed to assess caspase-3 activation is based on cleavage of a substrate (DEVD-AMC) by caspase-3, which releases a fluorogenic compound that can be measured by spectrofluorometry. The methodology is quantitative and reproducible but the equipment required is expensive and the procedure for quantifying the samples is time-consuming. This technique can be applied to other tissues, such as the heart and kidneys. DEVD-AMC can be replaced by other substrates to measure the activity of other caspases.

Caspases or Cysteine-dependent aspartate-directed proteases are a family of enzymes that are involved in various homeostasis processess1. Caspases can be broadly classified according to their roles in apoptosis or inflammation. Caspase-1, -4 , -5 and -12 are involved in inflammation whereas those engaged in apoptosis can be sub-classified as initiator caspases (caspase-8 and -9) and executioner caspases (caspase-3, -6 and -7).

Caspases play significant roles in many pathologies, mainly in disorders where apoptosis can be excessive, as observed after myocardial infarction (MI) or cerebral ischemia.

In the rat model of post-MI syndrome used in our lab, it is established that caspase-3 is activated not only in the myocardium2 but also in the limbic system which is implicated in the control of mood and emotions3-6. It is also seen that caspase-3 is activated in different regions of the limbic system, such as the amygdala and hippocampus, and this activation peaks around 3 days after ischemic insult4. Interestingly, caspase-3 activity correlates with post-MI behavioral impairments, and its attenuation through pharmacological and nutritional interventions reduces these injuries, suggesting a possible link between caspase-3 and post-MI depression7-12.

Caspase-3 activation can be measured by various techniques. Western blotting ascertains the enzymatic properties of the caspases and can detect active enzymes as well as their pro-enzyme forms. Western blotting, however, is semi-quantitative, and small variations can be lost through weak signal-to-noise ratios13. A better technique is based on the cleavage of a substrate (DEVD-AMC) by caspase-3 that releases a fluorogenic compound and can be measured by spectrofluorometry. Caspase-3 activation is a reliable marker of apoptosis. Measurement of apoptosis can be unstable because the time window of occurrence is short, and neighboring cells could phagocytize apoptotic bodies or cells14. Apoptosis can be further confirmed by other techniques, such as Terminal deoxynucleotidyl transferase dUTP nick end labeling (TUNEL) assay, that detects DNA fragmentation resulting from apoptotic signaling cascades6, or the ratio of pro-/anti-apoptotic proteins, such as Bax/Bcl26.

Animals are handled in compliance with regulation of the local Animal Care Committee, in accordance with the Guidelines of the Canadian Council on Animal Care. Rats are housed individually under constant conditions (temperature of 21-22 ºC and humidity of 40-50%), including a 12 hr dark-light cycle, beginning at 08:00 am. Chow pellets and tap water are available ad libitum throughout the study. An acclimatisation period of 3 days after delivery by the supplier is allowed before the experiment. Male Sprague-Dawley rats weighing between 300-800 g have been routinely used with this protocol.

The amygdala was isolated in 8 sham (control) and 8 MI rats three days after the induction of the ischemia/reperfusion protocol. Caspase-3 activity was measured in this tissue using a fluorochrome that can be cleaved by active caspase-3 and detected by spectrofluorometry. Positive and negative measurements (see steps 3.11, 3.12 and 3.16) were performed in triplicate and measured during 10 sec, with 1 point at each sec. Differences between positive and negative controls were calculated and the average of the differences for all sham tissue performed during this experiment was set at 100%. Results from MI rats were scaled according to this reference and Figure 1 illustrates the final results: it indicates a significantly higher activity in MI rats compared to sham (p <0.05). 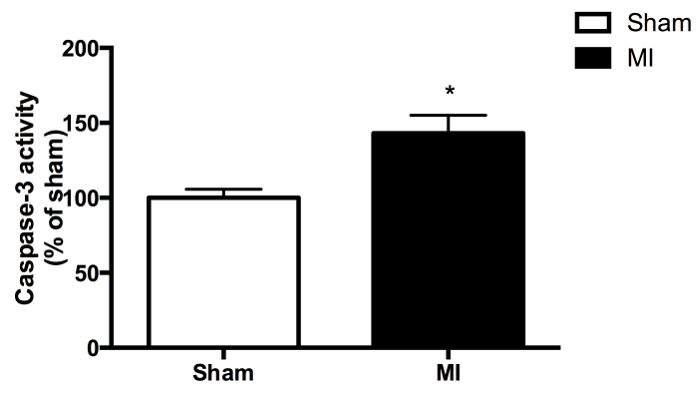 Figure 1. Caspase-3 activity in the amygdala of MI rats, expressed as percentage of mean activity in sham controls, set to 100% (8 rats per group). *Indicates significant between-group difference (p <0.05). The data are expressed as mean ± SEM.

Our experience with this protocol over the last 10 years led to the identification of critical methodological issues. First, rapid brain dissection in a Petri dish on crushed ice is important to maintain preparation quality. Second, it must be realized that tissue sonication is shorter for the cerebral amygdala compared to other types of tissues, such as the heart (10 sec) or kidneys (20 sec). Third, great care should be taken to carefully mix the substrate before adding it to the samples. We encountered variable signals when the mixing sequence was inadequate. Fourth, no bubbles should be present in the quartz cell when reading the samples. Otherwise, the signal could be altered.

We made a change in the last few years to increase reproducibility of the results: increasing substrate volume to avoid volume less than 1 µl. Still, small variations may occur between successive assays, and at least 3 control samples should be used to control for variations. Fluorescence measures of these controls are averaged and the mean is set at 100%. Fluorescence measures in experimental samples are transformed in percent of the control samples.

Another limitation of the technique is that only a portion of tissue is used and, therefore, caspase-3 activity could be underestimated. Indeed, the time window of apoptosis is short in any given cell and could be missed even though it occurs in neighboring areas at the time of sampling1,4,15. The reverse is also possible: apoptosis could be particularly intense in portions of tissue, resulting in overestimation of caspase-3 activity. We recommend the use of remaining tissues (amygdala) for complementary techniques, such as TUNEL assays or Bax/Bcl2 ratio (see Introduction).

Spectrofluorometry has at least two advantages over Western blotting. First, it directly generates quantitative data. Second, it measures enzymatic activity itself rather than protein or RNA expression, which may be unrelated, and it is known that protein expression may be increased without any change in enzymatic activity. Moreover, spectrofluorometry can be performed on other tissues or with different animal species and can be adjusted for other caspase subtypes, with different substrates, so that safe comparisons can be made.

In conclusion, this document demonstrates the use of spectrofluorometry to measure caspase-3 activity in the amygdala, providing evidence that apoptosis occurs in this region of the limbic system 3 days after MI.

This work was supported by a grant from the Natural Sciences and Engineering Research Council of Canada. Kim Gilbert holds a studentship from Fonds de la recherche du Québec - Santé. 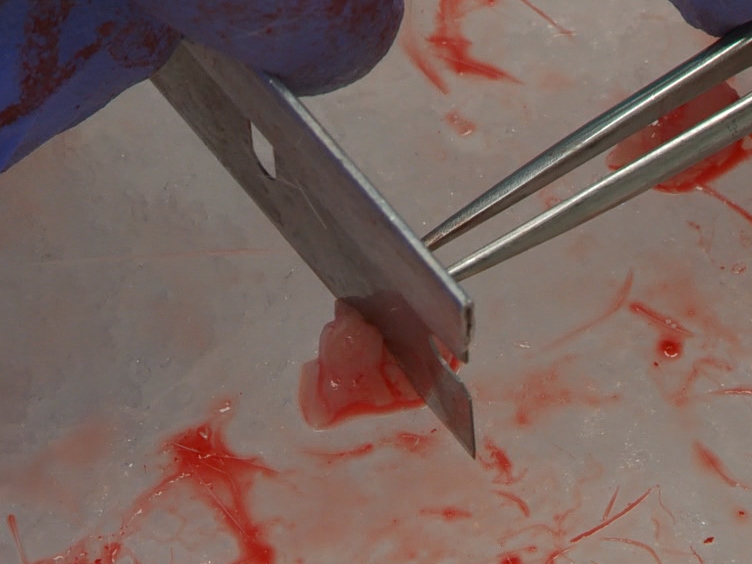