Here, we present a comprehensive capillary zone electrophoresis protocol for the assessment of intrinsic physicochemical heterogeneity of monoclonal antibodies as a quality attribute.

Biotherapeutic proteins, such as monoclonal antibodies (mAbs), are feasible alternatives for the treatment of chronic-degenerative diseases. The biological activity of these proteins depends on their physicochemical properties. The use of high-performance techniques like chromatography and capillary electrophoresis has been described for the analysis of physicochemical heterogeneity of mAbs. Nowadays, capillary zone electrophoresis (CZE) technique constitutes one of the most resolutive and sensitive assays for the analysis of biomolecules. Besides, the electro-driven separation in CZE is governed by extensive properties of matter and offers the advantage of analyzing proteins close to their native state. However, the successful implementation of this technique for routine analysis depends on the skills of the analyst at the critical steps during sample and system preparation. The purpose of this tutorial is to detail the steps to succeed in the CZE analysis of mAbs. Further, this protocol can be used for the development and improvement of skills of the personnel involved in protein analytical chemistry laboratories.

Monoclonal antibodies (mAbs) are biotherapeutic proteins with increasing interest due to their capacity to act against several chronic and degenerative diseases1. Like other biomolecules, mAbs are prone to undergo several physicochemical modifications at all stages of their life cycle (i.e., from biosynthesis to the final product). Such modifications include, but are not limited to: deamidation, glycosylation, oxidation, cyclization, isomerization, aggregation and proteolytic cleavage2. Hence, analytical techniques capable to resolve intrinsic isoforms are needed to monitor mAbs heterogeneity and stability in order to establish quality specifications.

Capillary electrophoresis (CE) is a high-performance separation technology carried outinside of a narrow fused-silica tube (µm range) filled with a background electrolyte (BGE). Upon application of an electrical field (up to 30,000 V), charged molecules migrate towards the electrode with opposite charge (i.e., electro-driven separation). The use of high voltages in CE permits fast analyses and increased efficiency, which are superior to classical gel electrophoresis. Capillary zone electrophoresis (CZE) is a CE-based technique routinely used in the biopharmaceutical industry for product quality assessment3-9. Unlike other modes of CE (e.g., capillary gel electrophoresis, capillary isoelectric focusing) or chromatography-based methods, CZE can be conducted without using denaturants or solid-phase interfaces, allowing the analysis of the inherent heterogeneity of mAbs close to their native state10. CZE separation of mAb isoforms occurs inside of a fused-silica capillary covered with a hydrophilic polymer (neutral capillary) and is based on their different electrophoretic mobility, which is ruled by charge, mass, size and shape (or hydrodynamic volume)11. mAb moieties are detected when they are mobilized and pass through the detection window, which is sensed by an ultraviolet (UV) absorbance detector at 214 nm4.

The successful implementation of this analytical technique will depend on proper attention to details before and during the experiment. Acting otherwise will increase the cost and time to conduct the analysis, ultimately leading to constant failure and frustration.

Here, we present a step-by-step guide to conduct a successful analysis of mAb heterogeneity by CZE through the detailed explanation of the preparation of solutions and samples, the preparation of CE system, the instrument methods set up, the data acquisition, and the processing. For the purpose of this tutorial, a recombinant fully human anti-tumor necrosis factor alpha (anti-TNFα) mAb is used as protein model; however, this protocol can be easily customized for the analysis of other proteins considering brief modifications. Additionally, several recommendations to mitigate potential issues are proposed. The reader is encouraged to strictly follow the proposed protocol, as the probability to succeed will increase.

Figure 2 shows the typical electrical current profile of a 200 mM EACA, 30 mM lithium acetate, pH 4.8 BGE with anti-TNFα mAb sample diluted with Tris buffer (50 mM, pH 8.0). As can be observed, the current is stable throughout the analysis and can oscillate between values of 30 to 35 µA. Figure 3 shows the CZE electropherogram of a blank sample where the detected peak corresponds to the histamine internal standard. It is expected for histamine to have a migration time of 3.7 to 4.1 min. Figure 4 shows the CZE electropherogram of anti-TNFα mAb. As can be noted, the main peak is preceded and followed by peaks of smaller intensity. Since separation is conducted under normal polarity (i.e., from positive to negative), the analysis reveals basic isoforms (mAb variants with positive charge) migrating faster and acidic isoforms (mAb variants with negative charge) migrating slower than the main isoform. 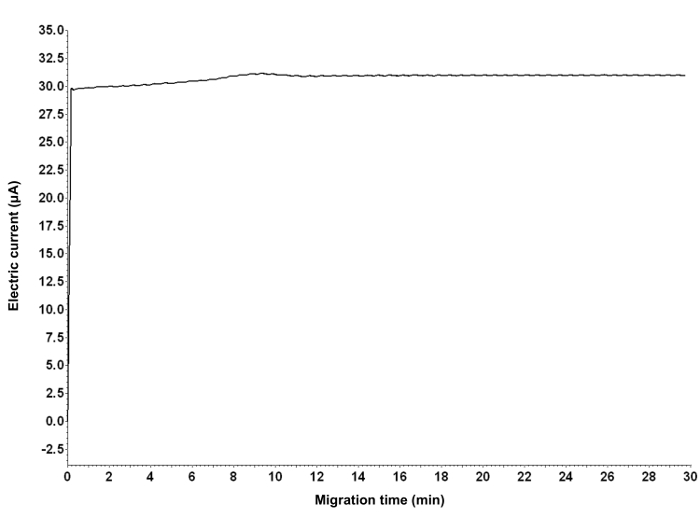 Figure 2: Electrical current profile of a typical CZE run. The BGE current is stable around 30 µA when the mAb sample is diluted with Tris buffer (50 mM, pH 8.0). Please click here to view a larger version of this figure. 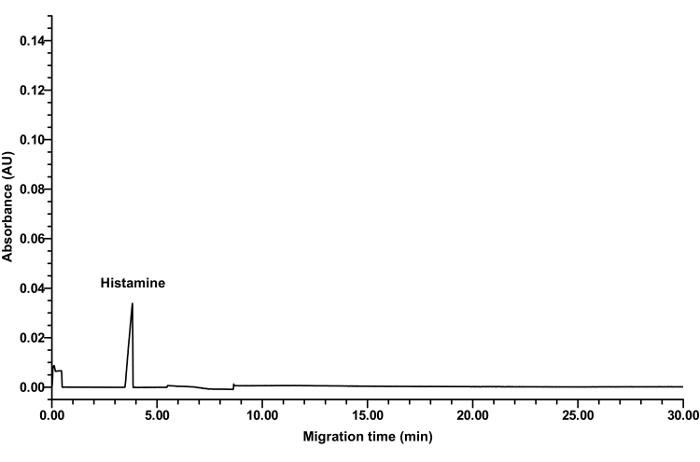 Figure 3: CZE electropherogram of blank sample. Note that no peaks are detected apart from that of the histamine internal standard. AU = absorbance units. Please click here to view a larger version of this figure. 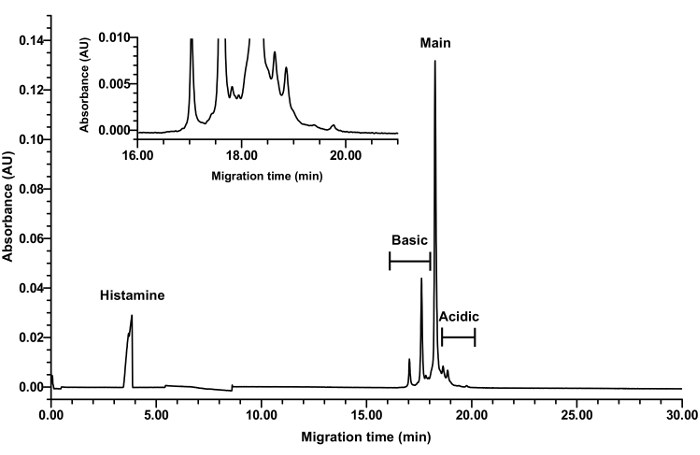 Figure 4: Physicochemical heterogeneity of anti-TNFα mAb determined by CZE. This sample is composed of basic, main and acidic isoforms. Inset shows an expanded view of the variants resolved by CZE. AU = absorbance units. Please click here to view a larger version of this figure.

In this tutorial, we highlight the importance of proper practices when conducting CZE analyses of mAbs in order to increase the probability to succeed. However, when CZE is used on a routine basis, issues arise inevitably12.

For best results, it is important to follow the notes that were included throughout the protocol, as they will help the analyst to overcome and troubleshoot difficult steps. A major consideration to obtain optimum resolution at a given set of conditions is the correct preparation of BGE solution. This process requires having strict control over ionic strength of buffering agents, concentration of non-buffering additives and pH. Overall, the CE system requires care and attention to detail. It can be easily damaged if any step concerning the system cleaning or assembly is ignored.

The present method considers the use of a neutral capillary. Unlike bare fused-silica capillaries, neutral capillaries reduce protein adsorption onto the capillary inner wall, thus improving separation efficiency, accuracy and repeatability9. However, its use is limited by the amount of injections that can be performed. In our experience, 120 to 150 injections can be carried out without effect on resolution due to the progressive degradation of the inner coating. Once the capillary has reached this limit, a new capillary will be required.

Other protocols have been reported for the analysis of the physicochemical heterogeneity of mAbs by CZE, which include the use of permanently- and dynamically-coated capillaries13,14. However, these studies propose the application of a fixed set of conditions to analyze the wide diversity of mAbs. In contrast to existing methods, we believe that optimum performance can only be achieved by tailoring experimental conditions. For instance, the protocol presented here has been used and adjusted in the past to analyze the isoform heterogeneity of four other different mAbs and a mAb fragment10. In order to adapt this protocol to evaluate other mAbs, we recommend the modulation of BGE ionic strength and pH according to the variants diversity and isoelectric point of the molecule to be analyzed.

Further steps after mastering this technique should include the evaluation of the method performance. Parameters such as selectivity and repeatability (in terms of the relative standard deviation of migration time and area percentage) must be tested in order to confirm that the method is suitable for the intended use. 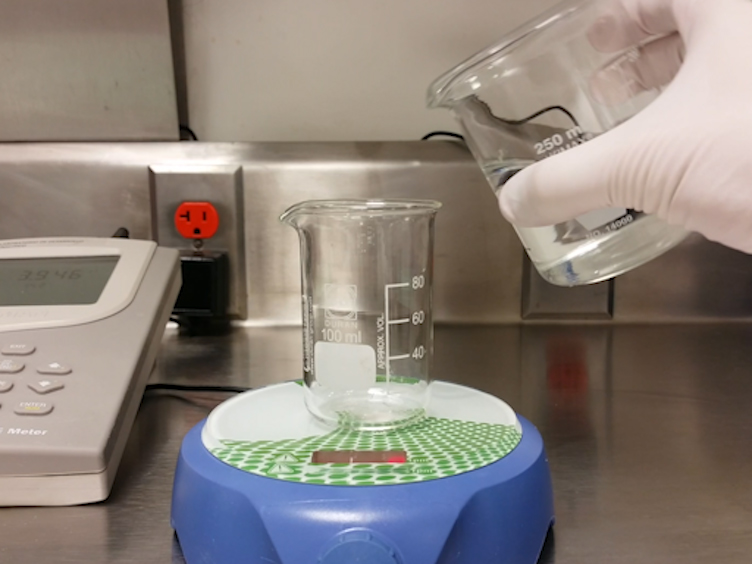