A macrofoam based sampling methodology was developed and evaluated for the detection and quantification of norovirus on environmental hard surfaces.

Human noroviruses are a leading cause of epidemic and sporadic gastroenteritis worldwide. Because most infections are either spread directly via the person-to-person route or indirectly through environmental surfaces or food, contaminated fomites and inanimate surfaces are important vehicles for the spread of the virus during norovirus outbreaks.

We developed and evaluated a protocol using macrofoam swabs for the detection and typing of human noroviruses from hard surfaces. Compared with fiber-tipped swabs or antistatic wipes, macrofoam swabs allow virus recovery (range 1.2-33.6%) from toilet seat surfaces of up to 700 cm2. The protocol includes steps for the extraction of the virus from the swabs and further concentration of the viral RNA using spin columns. In total, 127 (58.5%) of 217 swab samples that had been collected from surfaces in cruise ships and long-term care facilities where norovirus gastroenteritis had been reported tested positive for GII norovirus by RT-qPCR. Of these 29 (22.8%) could be successfully genotyped. In conclusion, detection of norovirus on environmental surfaces using the protocol we developed may assist in determining the level of environmental contamination during outbreaks as well as detection of virus when clinical samples are not available; it may also facilitate monitoring of effectiveness of remediation strategies.

Human noroviruses are a leading cause of epidemic and sporadic acute gastroenteritis worldwide 1,2,3. The virus is extremely contagious and transmission occurs through direct person to person interaction or indirectly through contact with contaminated food, water or environmental surfaces. Noroviruses can be shed for extended periods and prolonged survival of the virus on environmental surfaces has been documented 1,2,3. During peak shedding, billions of virus particles are released per gram of feces, and vomit also contains a sufficient number of viral particles to cause infection 4,5,6,7,8,9,10. In addition, transfer of the virus between inanimate surfaces and human skin can occur easily 2,11,12. Hence, monitoring of environmental contamination may assist in outbreak investigations and in assessing the effectiveness of clean-up and disinfection procedures.

Several environmental sampling protocols have been described for the detection of rotavirus, coliphage MS2, feline calicivirus (FCV), and bacteriophage P22 13,14,15,16. However, the validation conditions described in these studies, including fast desiccation (<1 hr) and small surface areas (25 x 100 cm2), may not adequately represent field settings. In addition, the expected low contamination levels of environmental surfaces require protocols that are able to detect very few virus particles.

1. Swab Sampling in the Field

2. Storage and Transport of Swabs to the Laboratory

NOTE: All centrifugation steps use a table top centrifuge at 5,000 x g for 5 min at room temperature, unless stated otherwise. Be extra careful when working with the universal nucleic acid extraction (UNEX) buffer. Wear goggles or face shield.

7. Quantification of Norovirus in Swab Samples 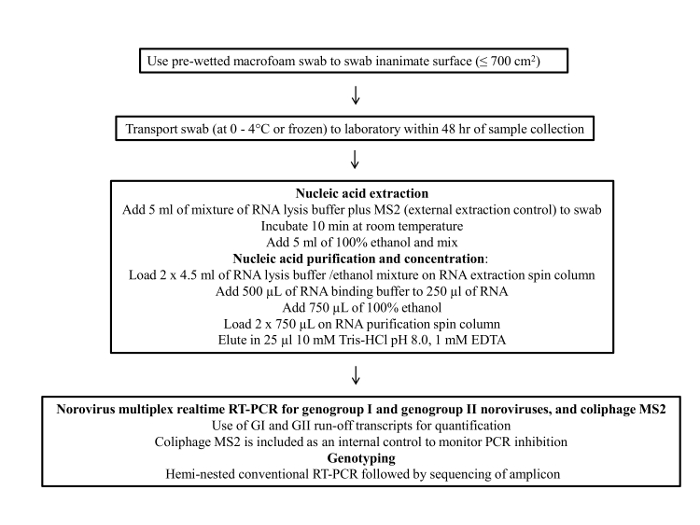 Figure 1: Flow chart of the final protocol for environmental surface sampling of norovirus Please click here to view a larger version of this figure.

Table 1 summarizes the results from 34 swab samples that were collected from a cruise ship that had reported cases of suspected norovirus gastroenteritis during a voyage. Swab samples were extracted and tested in duplicate for norovirus by multiplex real-time RT-qPCR. Seventeen (18.5%) samples tested positive including 8 samples from surfaces in cabins where passengers with norovirus symptoms had stayed and 9 from common areas on the ship. The number of genomic copies per sample were calculated from the Ct values (which ranged from 16 to 31) using a standard curve of a norovirus GII.7 RNA transcript. The median number of genome copies from swab samples in cabins was 3.6 log10(range: 2.4 – 4.5 log10 RNA copies), which was significantly higher than the genome copies from common areas (range: 1.2 – 2.1 log10 genome copies) (P <0.001). Four (23.5%) of the 17 positive swab samples were able to be genotyped, and all samples had identical GII.1 sequences.

Table 1: Results from 34 swab samples that were collected from a cruise ship that had reported cases of suspected norovirus gastroenteritis during a voyage.

Figure 2 shows the relationship of Ct values determined by RT-qPCR and the ability to sequence these samples. In total, 127 out of 217 swab samples tested positive for GII norovirus by RT-qPCR. The samples displayed a wide range (12-40) of Ct values. In total, 29 (22.8%) of the RT-qPCR positive samples could be genotyped. Swab samples with Ct values below 27 and ranging between 28-31 were genotyped at rates of 100% and 72.2%, respectively. In contrast, only 22.0% and 1.6% of swab samples with Ct values of 32-36 and 37-40, respectively, produced hemi-nested amplicons that could be sequenced successfully. 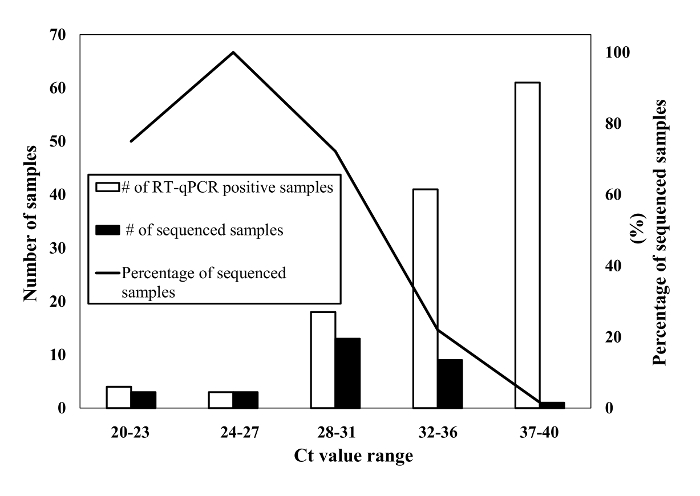 Figure 2: Results of RT-qPCR screening and sequencing of swab samples that had been collected during confirmed norovirus outbreaks. White bars represent the number of RT-qPCR positive swab samples virus. Human norovirus nucleic acids in those RT-qPCR positive samples were amplified using hemi-nested PCR assay and then sequenced for confirmation of genotyping. Black bars and line represent the number and the percentage of genotype confirmed swab samples, respectively. Please click here to view a larger version of this figure.

Supplementary Table 4: Controls to include in each RT-qPCR test for detection of norovirus in environmental swab samples.

Noroviruses have a 50% human infectious dose between 18 and 103 virus particles20. Therefore, even low-level contamination of surfaces may pose a public health risk. Several aspects of the swab sampling protocol were evaluated including: 1) different swab materials, 2) storage condition swabs during transport, 3) viral RNA concentration, and 4) coliphage MS2 as internal extraction control.

Until recently, only the performance of swabs made from cotton, polyester, nylon and antistatic wipe) had been evaluated and proposed for field use13,14,15,21,22. Of these, cotton swabs have been recommended by the ISO 15216 protocol for detection of norovirus and hepatitis A virus from food preparation surfaces and fomites23. However, there are limited data on the testing performance of cotton swabs under field conditions with large high-touch surfaces such as doorknobs, computers, and toilet seats that have been frequently implicated in the transmission of noroviruses24,25. Additionally, the size of these environmental surfaces exceeds the capacity of fiber-tipped swabs. In our study, we demonstrated that macrofoam swabs, which have a larger swab head than the fiber-tip swabs, have higher recovery rates for human norovirus when sampling environmental surfaces with an area up to 700 cm2.

Noroviruses in solution are relatively unstable at ambient temperature and require at least refrigeration. Therefore, shipping to the laboratory should occur at 0-4 °C within 48 h after collection of the swabs. The volume of sample that can typically be tested in a PCR reaction is much smaller than that of the amount of sample after elution from the swab (3-5 μL vs. 5-10 mL) which, without concentration, significantly reduces the positivity rate. In environmental virology, polyethylene glycol (PEG) has been used successfully to concentrate viruses from large volumes of environmental waters. However,  volumes up to 10 mL can be easily extracted and concentrated using Midi spin columns to volumes as low as 250 μL, and further concentrated 10-fold with high recovery using spin columns.

Although RT-qPCR is the gold standard for sensitive detection and quantification of norovirus, the sensitivity of these assays can be easily affected by the presence of PCR inhibitors that are co-extracted from the swab samples. Therefore, inclusion of an extraction control such as coliphage MS2 virus particles, in a multiplex PCR format that detects both norovirus as well as MS2, helps to monitor the presence of PCR inhibition and to assess variation among different experiments.

The test variables of a laboratory validation method are critical to determine the discriminatory power of a test method and are further translated into the method's likely field sampling performance. Taking real world field condition (e.g., delayed sampling, larger surface areas of up to 700 cm2) into account, the detection limit for norovirus was 3.4 log10(stainless steel) and 4 log10(toilet seat) copies norovirus per surface sampled6. Consequently, negative swab results are not definitive that no viral contamination has occured. Clinical and epidemiological information of norovirus illness always trumps environmental findings2,6.

Our data from a cruise ship showed that high-touch surfaces such as telephones, computer keyboards, and door handles tested positive for norovirus in cabins where people with reported viral gastroenteritis had stayed. These surfaces either became contaminated through direct contact or indirectly through droplets produced during toilet flushing or vomiting episodes6,7,8,9,10.

In conclusion, detection of norovirus on environmental surfaces using this newly developed swab protocol may assist in determining the level of environmental contamination during outbreaks, detect virus when clinical samples are not available and in monitoring of the effectiveness of cleaning practices. Fiber tipped swab (cotton and rayon) based surface sampling methods have been widely used to investigate other enteric viruses (e.g. rotavirus, and adenovirus)27,28,29. Considering the higher recovery efficiency for norovirus of macrofoam swabs over those fibers tipped swabs6, we expected that the macrofoam swabs will be able to detect other enteric viruses as well.

Authors have no conflicting interest. The findings and conclusions in this report are those of the authors and do not necessarily represent the official position of the Centers for Disease Control and Prevention. 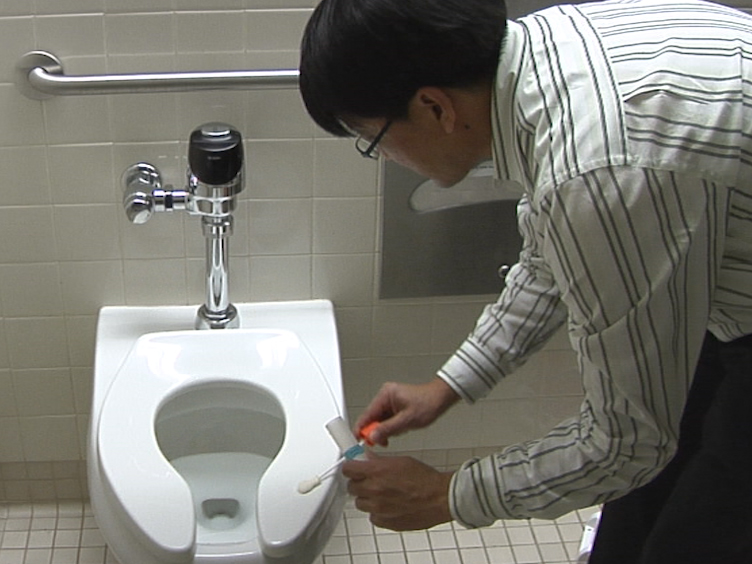