Gene deletion mutants generated through homologous recombination are the gold standard for gene function studies. The OSCAR (One Step Construction of Agrobacterium-Recombination-ready-plasmids) method for rapid generation of deletion constructs is described. Agrobacterium mediated fungal transformation follows. Finally, a PCR based confirmation method of gene deletions in fungal transformants is presented.

Precise deletion of gene(s) of interest, while leaving the rest of the genome unchanged, provides the ideal product to determine that particular gene's function in the living organism. In this protocol the OSCAR method of precise and rapid deletion plasmid construction is described. OSCAR relies on the cloning system in which a single recombinase reaction is carried out containing the purified PCR-amplified 5' and 3' flanks of the gene of interest and two plasmids, pA-Hyg OSCAR (the marker vector) and pOSCAR (the assembly vector). Confirmation of the correctly assembled deletion vector is carried out by restriction digestion mapping followed by sequencing. Agrobacterium tumefaciens is then used to mediate introduction of the deletion construct into fungal spores (referred to as ATMT). Finally, a PCR assay is described to determine if the deletion construct integrated by homologous or non-homologous recombination, indicating gene deletion or ectopic integration, respectively. This approach has been successfully used for deletion of numerous genes in Verticillium dahliae and in Fusarium verticillioides among other species.

Genetic dissection is a powerful methodology for determining the functional importance of individual or combinations of genes. A standard approach to understand the role of specific genes is production of single gene mutants unaltered in any other gene. The most powerful and least potentially confounding approach is complete and precise deletion of a gene of interest's open reading frame (GOI ORF) without damage to any other gene function.

Because standard ligation approaches for deletion plasmid generation require multiple steps, the rational for OSCAR1 was to produce a more rapid in vitro approach. Figure 1 depicts the assembly process in the OSCAR approach. The method described here has the advantage of combining rapid construction of individual gene deletion vectors in a single multipart reaction in combination with subsequent Agrobacterium tumefaciens mediated transformation (ATMT). OSCAR is very rapid and compares well with other strategies such as use of Gibson assembly in yeast2. The OSCAR method has been used successfully with several Ascomycota species of fungi. These species include: Fusarium verticillioides (unpublished), Verticillium dahliae3, Setosphaeria turcica4, Metarhizium robertsii5, Fusarium oxysporum f. sp. vasinfectum6, Pestalotiopsis microspora7, Colletotrichum higginsianum8, and Dothistroma septosporum9 and Sarocladium zeae (unpublished).

This protocol provides step-by-step instruction for the method including primer design, flank PCR amplification, the OSCAR BP reaction, deletion construct structure confirmation, transformation of Agrobacterium with the construct followed by ATMT based transfer of the deletion construct into the fungal cells, and finally differentiating fungal deletion mutants from those with ectopically integrated deletion constructs.

The OSCAR method, in a single reaction, generates a plasmid containing the flanks of the target gene to be deleted surrounding the selectable marker cassette. The production of deletion constructs using OSCAR is very efficient. The system can, however, produce partial constructs containing some but not all three fragments (the two gene flanks and the selectable marker). Generally, the majority of E. coli transformants contain the correct OSCAR construct. For example, Figure 2 depicts the OSCAR deletion construct for the Verticillium dahliae gene VDAG_06812. In this case the flanks of VDAG_06812 lack HindIII or KpnI sites and therefore a plasmid insert of 4,247 bp should be released. Figure 3 shows HindIII-KpnI restriction enzyme double digestion confirmation of the correct plasmid structure except for lanes 5 and 11 representing anomalous constructs. Figure 4 shows final confirmation of two different gene deletions by Southern blot. Figure 5 shows a definitive PCR approach as an alternative to Southern blot. 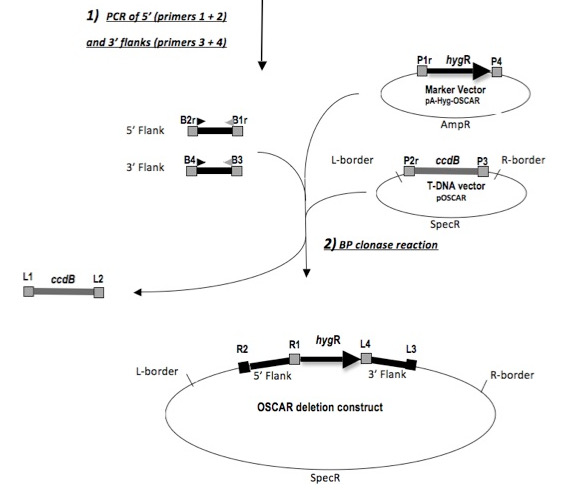 Figure 3: Restriction digestion confirmation of the deletion construct structure of VDAG_06812 with KpnI and HindIII. Plasmids were double digested and analyzed by gel electrophoresis on a 0.8% agarose gel. The correct construct generates two bands, of about 6.9 kb and 4.2 kb, representing the binary vector backbone and the HygR marker fused to the target gene flanks, respectively. Re-print with permission from reference1. 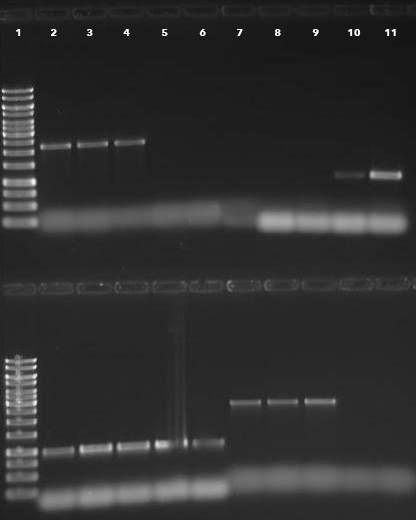 One Step Construction of Agrobacterium-Recombination-ready-plasmids (OSCAR) has been successfully employed with an ever-increasing number of Ascomycota fungi. The method should also easily be applicable to the Basidiomycota and species from other fungal phyla (with appropriate promoters driving selectable marker genes), assuming Agrobacterium mediated transformation and homologous recombination are possible. Additional marker vectors have been generated to diversify choices of anti-fungal compound as well as allow the production of double and higher order mutants. These include resistance to G418, nourseothricin, and recently the herbicides glufosinate ammonium and chlorimuron ethyl4.

The method was worked out for use with Verticillium dahliae from which the images presented here are primarily derived1. More recently OSCAR has been used extensively for deletion of genes in the mycotoxigenic fungus Fusarium verticillioides. Over 60 deletion constructs have been made and deletions mutants for more than 30 genes generated (unpublished).

In its current iteration the process requires about 4-6 weeks to have a set of confirmed deletion mutants in hand. The following is a brief list of the major OSCAR steps and approximate time needed to accomplish them: 1) Design and procurement of OSCAR primers based on genome data (5 days), 2) flank amplification and cloning, (2 days), 3) clone confirmation by miniprep and sequencing (1 week), 4) introduction of plasmid into Agrobacterium for ATMT (4 days), 5) production of transformants by ATMT in Fusarium verticillioides and grow out (2 weeks, note that this is dependent on growth rate of the fungus under study), thermolysis and PCR determination of transformant genotypes (2 days), 6) single sporing, genotype confirmation and storage (1-2 weeks).

The adaptation of OSCAR to true high throughput has not been attempted to our knowledge but should be practical. The reactions are sufficiently robust to allow for successful application in multi-well format. The use of robotics would certainly advance this approach. The OSCAR method has the time saving advantage of requiring a single recombination reaction containing the amplified flanks and two plasmids pOSCAR and pA-Hyg OSCAR. Similar approaches require generation of an entry clone that has to be confirmed and then used in a second reaction to generate the construct of interest. Plasmids pOSCAR and pA-Hyg OSCAR mentioned are available via Addgene or the Fungal Genetics Stock Center15. Other OSCAR marker plasmids such as pA-Bar-OSCAR and pA-Sur-OSCAR may be available from authors5. 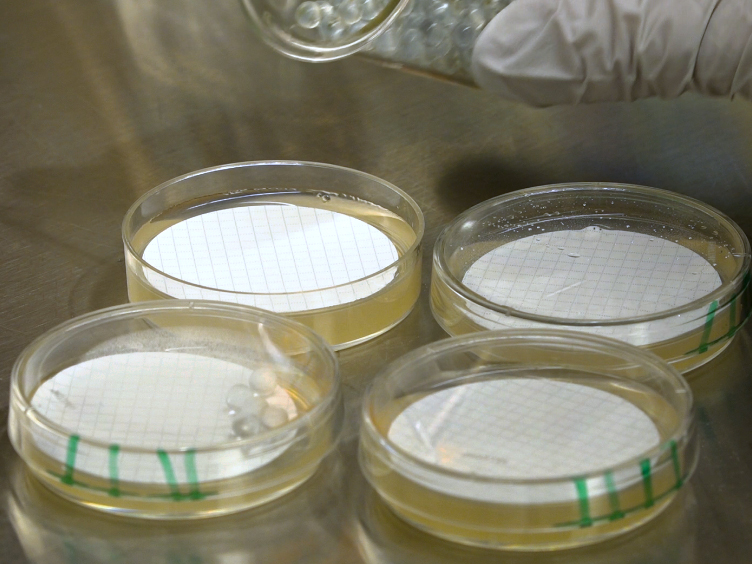