Auditory brainstem neurons of avians and mammals are specialized for fast neural encoding, a fundamental process for normal hearing functions. These neurons arise from distinct precursors of embryonic hindbrain. We present techniques utilizing electroporation to express genes in the hindbrain of chicken embryos to study gene function during auditory development.

Electroporation is a method that introduces genes of interest into biologically relevant organisms like the chicken embryo. It is long established that the chicken embryo is an effective research model for studying basic biological functions of auditory system development. More recently, the chicken embryo has become particularly valuable in studying gene expression, regulation and function associated with hearing. In ovo electroporation can be used to target auditory brainstem regions responsible for highly specialized auditory functions. These regions include the chicken nucleus magnocellularis (NM) and nucleus laminaris (NL). NM and NL neurons arise from distinct precursors of rhombomeres 5 and 6 (R5/R6). Here, we present in ovo electroporation of plasmid-encoded genes to study gene-related properties in these regions. We show a method for spatial and temporal control of gene expression that promote either gain or loss of functional phenotypes. By targeting auditory neural progenitor regions associated with R5/R6, we show plasmid transfection in NM and NL. Temporal regulation of gene expression can be achieved by adopting a tet-on vector system. This is a drug inducible procedure that expresses the genes of interest in the presence of doxycycline (Dox). The in ovo electroporation technique – together with either biochemical, pharmacological, and or in vivo functional assays – provides an innovative approach to study auditory neuron development and associated pathophysiological phenomena.

Fast neural encoding of sound is essential for normal auditory functions. These include sound localization abilities1, speech in noise discrimination2, and the comprehension of other behaviorally relevant communication signals3. Analogous neurons located in the auditory brainstem of both avians and mammals are highly specialized for fast neural encoding4. These include the chicken nucleus magnocellularis (NM), the nucleus laminaris (NL) and their mammalian analogs, the anteroventral cochlear nucleus (AVCN) and the medial superior olive (MSO), respectively5. However, developmental mechanisms regulating fast neural encoding are poorly understood in the auditory brainstem. Therefore, it is advantageous to study specific genes that are responsible for fast neural encoding in order to better understand their expression, regulation and function in auditory development.

The developing chicken embryo is an effective and well-established research tool to study basic biological questions of auditory system development6,7. Recent molecular advances have addressed these biological questions in the developing chicken embryo by expressing or knocking down genes of interest in order to analyze in vivo gene function8,9. Investigating the regulatory role of specific genes is a significant advancement in understanding pathologies associated with auditory deficits. Here, we present in ovo electroporation of plasmid-encoded genes into the chicken auditory brainstem where fast neural encoding of sound occurs10. By targeting auditory neural progenitor regions associated with rhombomeres 5 and 611,12 (R5/R6), we show spatial control of plasmid transfection in NM and NL. In addition, we show temporal regulation of expression by adopting a tet-on vector system. This is a drug inducible procedure that expresses the genes of interest in the presence of doxycycline (Dox)8.

All procedures were approved by Northwestern University Institutional Animal Care and Use Committees, and carried out in accordance with the National Institutes of Health Guidelines for the Care and Use of Laboratory Animals.

NOTE: The windowing procedure has been published before13. Please see reference 13 for additional visual information.

NOTE: The following sections (7 - 9) and procedures have been published before14. Please see these references for additional visual information.

9. Preparation of Brainstem Slices for In Vivo Electrophysiology or Imaging

We show here that in ovo electroporation permits gene expression in a normally developing biological system. Plasmid-encoded genes are focally injected into the neural tube overlying R5/R6. A schematic example of the electrode and pipette placements relative to important anatomical markers is shown in Figure 1A. The correct location of plasmid injection is confirmed 24 h after electroporation and shown in Figure 1B. The targeted injection of plasmids into the neural tube overlying R5/R6 permits expression in specific auditory brainstem regions, namely NM and NL(11). Figure 1C shows an in vitro brainstem slice from an E12 embryo under differential interference contrast (DIC) illumination. The auditory regions of interest are outlined. With florescent illumination (Figure 1C1), YFP expressing neurons within NM and NL are visible. Figure 1D shows DIC illumination for an E18 embryo under high magnification. The classic adendritic cell bodies of numerous NM neurons are apparent. With florescent illumination (Figure 1D1), an YFP expressing NM neuron is clearly visible while other transfected neurons are out of the focal plane. Because only a fraction of neurons in the targeted NM region are transfected, it allows other neurons within the same nucleus to serve as internal controls during dual patch-clamp electrophysiology experiments. Transgenes can also be temporally regulated by drug application, enabling gene expression and manipulation at precise developmental time periods8.

In ovo electroporation is a method of expressing or knocking down genes of interest in order to analyze in vivo gene function8,9. In the chicken embryo, it is an innovative method for expressing plasmid-encoded genes into different auditory brainstem regions8. To ensure optimal expression, several critical steps are required. First, only inject embryos whose otocysts are clearly visible. If otocysts are not visible the embryo is not at the correct developmental stage for electroporation. Second, smaller pipette tips make it easier to penetrate the neural tube and results in less tissue damage. However, the broken tip should be large enough to expel the DNA. Third, fill the entire neural tube region overlying R5/R6 with DNA (as visualized by spread of the fast green solution). Finally, placement of the stimulator electrode as close to the embryo as possible is important. However, make sure to avoid direct contact with the embryo, as current pulses can scorch and damage tissue.

Modifications to the technique can help improve the viability of embryos and the expression of plasmids. First, it is important to set eggs within 24 h of arrival to maintain high viability. Second, the window of the egg must be tightly sealed with tape as loss of fluid (i.e., dehydration) through an inadequate seal increases embryo death. Third, to optimize visualization of the otocyst, inject Indian ink from the rostral side of the embryo, using the smallest amount of ink as possible. Finally, stimulating electrodes can be moved slightly between R5/R6 regions to spread the electrically charged area without increasing current strength.

Despite the suggestions above, it should be noted that limitations exist. These include variable rates of transfected neurons, their location within the brainstem slice, and embryo survival. Although transfection efficiency varies amongst embryos, we previously reported with the electroporation parameter described here ~5-10% of NM/NL neurons are consistently transfected8. Even at higher rates of neuronal transfection, the preparation of brainstem tissue for in vitro patch-clamp electrophysiology poses challenges. For example, brainstem slices are between 200 - 300 µm thick and occasionally, transfected neurons are too deep within the tissue to adequately patch and perform functional assays. Finally, embryo survival post successful electroporation is also variable, albeit not as much as transfection rate. Depending on the desired embryo age for experimental use, survival variability can rage between 80-20%, the latter of which corresponds to the oldest embryos (>E18).

The significance of in ovo electroporation in chicken is advantageous over mammalian model systems for several reasons16. First, it is relatively inexpensive and an excellent alternative to transgenic or knockdown animals. Second, the chicken shares analogous nuclei with mammals that process temporal information of sound at the cellular, synaptic, and neural network level17. An example of similar auditory function occurs between AVCN/MSO in mammals and NM/NL of chickens, analogous auditory brainstem structures, respectively4,5. However, unlike traditional high-frequency-hearing mammalian research models, such as mice and rats, chickens utilize cues provided by both low- and high-frequency signals to encode auditory information18. Finally, chickens are auditory precocious animals; that is, their auditory system is near functional maturation at birth and the onset and refinement of hearing occurs during embryonic stages without environmental influences19,20. In contrast, the onset of hearing for typical mammalian research models begins 10-13 days after birth21,23.

We would like to thank Drs. Leslayann Schecterson, Yuan Wang, Andres Barria and Mrs. Ximena Optiz-Araya for initial assistance with protocol set-up and for providing plasmids. This work was supported by NIH/NIDCD grant DC013841 (JTS). 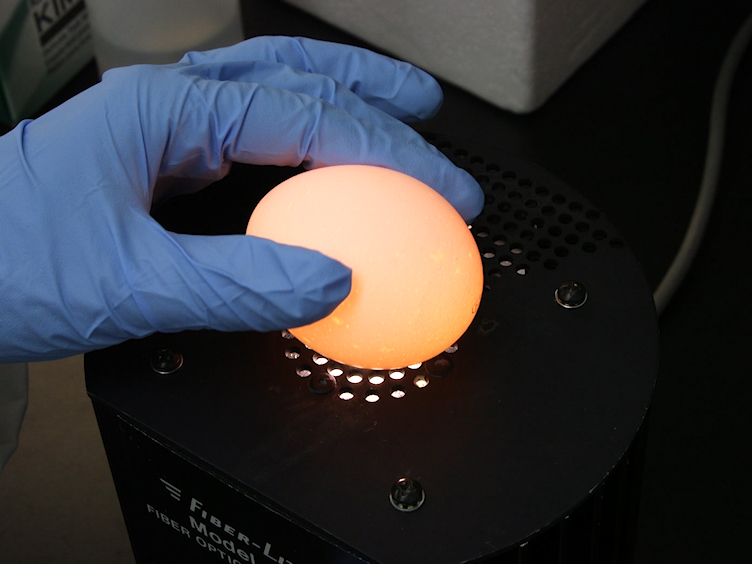