This manuscript describes a protocol to isolate and culture osteoclasts in vitro from mouse bone marrow, and to study the role of the mammalian/mechanistic target of rapamycin complex 1 in osteoclast formation.

Osteoclasts are unique bone-resorbing cells that differentiate from the monocyte/macrophage lineage of bone marrow. Dysfunction of osteoclasts may result in a series of bone metabolic diseases, including osteoporosis. To develop pharmaceutical targets for the prevention of pathological bone mass loss, the mechanisms by which osteoclasts differentiate from precursors must be understood. The ability to isolate and culture a large number of osteoclasts in vitro is critical in order to determine the role of specific genes in osteoclast differentiation. Inactivation of the mammalian/mechanistic target of rapamycin complex 1 (TORC1) in osteoclasts can decrease osteoclast number and increase bone mass; however, the underlying mechanisms require further study. In the present study, a RANKL-based protocol to isolate and culture osteoclasts from mouse bone marrow and to study the influence of mTORC1 inactivation on osteoclast formation is described. This protocol successfully resulted in a large number of giant osteoclasts, typically within one week. Deletion of Raptor impaired osteoclast formation and decreased the activity of secretory tartrate-resistant acid phosphatase, indicating that mTORC1 is critical for osteoclast formation.

Bone is an ever-changing organ and is remodeled by osteoblasts and osteoclasts throughout life. Osteoclasts are responsible for mineralized matrix resorption and osteoblasts synthesize and secrete new bone matrices1. The balance between bone resorption and bone formation is crucial for bone health including maintenance of bone mass and response to stimulation and injury. If this balance is disrupted, a series of bone metabolic diseases may occur, including osteoporosis and periodontal diseases. In these diseases, bone mass loss resulting from osteoclastic bone resorption exceeds the bone forming capacity of osteoblasts2,3. Thus, in order to develop pharmaceutical targets to treat skeletal disorders such as osteoporosis, it is critical to understand the generation and biology of osteoclasts4.

Osteoclasts are unique giant multinucleated cells located at or near the bone surface, and belong to the monocyte/macrophage family1. Ibbotson K. J. et al. reported a method to generate osteoclast-like cells in vitro with medium containing 1,25-dihydroxy-vitamin D35. The identification of macrophage-colony stimulating factor (M-CSF) and receptor activator for nuclear factor-κ B ligand (RANKL) as essential factors of osteoclast formation has dramatically increased the efficiency of osteoclastogenesis in vitro1,6,7. The ability to culture osteoclasts in vitro has improved our understanding of the generation and regulation of osteoclasts.

The mammalian/mechanistic target of rapamycin (mTOR) functions in two structurally and functionally distinct complexes, namely mTORC1 and mTORC28,9. The two multi-protein complexes are distinct from each other due to their different components and downstream substrates. mTORC1 contains the unique regulatory-associated protein of mTOR (Raptor), while mTORC2 contains the rapamycin-insensitive companion of mTOR (Rictor)9. mTORC1 can integrate and transmit important signals to regulate cell growth, proliferation and differentiation. Recently, we demonstrated that mTORC1 plays a key role in the network of catabolic bone resorption by deletion of Raptor to inactivate mTORC1 in osteoclasts10. However, the underlying mechanisms require further study. In the present study, a RANKL-based osteoclastogenic method was used to generate osteoclasts from bone marrow-derived macrophages (BMMs) of wild-type (WT) and RapCtsk mice, and to study the influence of mTORC1 inactivation on osteoclast formation.

NOTE: Mature osteoclasts may be present after 6-7 days of in vitro culture (step 4).

NOTE: After 6-7 days of in vitro culture in the 24-well plate, mature osteoclasts should be visible.

Deletion of Raptor was confirmed by western blotting analysis and the inactivation of mTORC1 was determined by a decrease in ribosomal protein S6 phosphorylation (P-S6), which is widely used as the readout for mTORC1 (Figure 3).

The number of TRAP-positive osteoclasts decreased in RapCtsk BMMs compared with the WT group (Figure 4A), which indicated that Raptor deficiency impaired osteoclast formation.

The activity of secretory TRAP is important for bone resorption, and TRAP activity in the culture medium was analyzed in the present study. As shown in Figure 4B, TRAP activity increased due to stimulation of RANKL in both WT and RapCtsk BMMs. In addition, TRAP activity decreased in RapCtsk BMMs compared with the corresponding WT group (P <0.05). 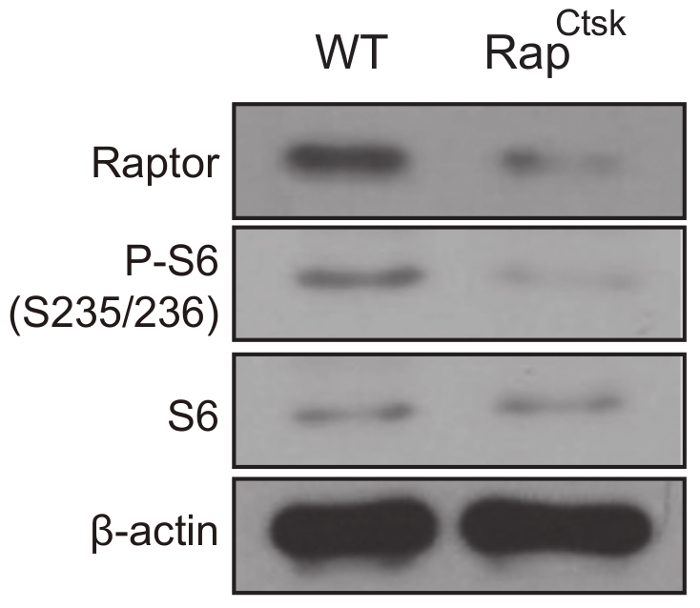 Figure 3: mTORC1 inactivation in RapCtsk BMMs. Western blotting analysis of Raptor, P-S6 and S6 expression in WT and RapCtsk BMMs on day 6. Please click here to view a larger version of this figure. 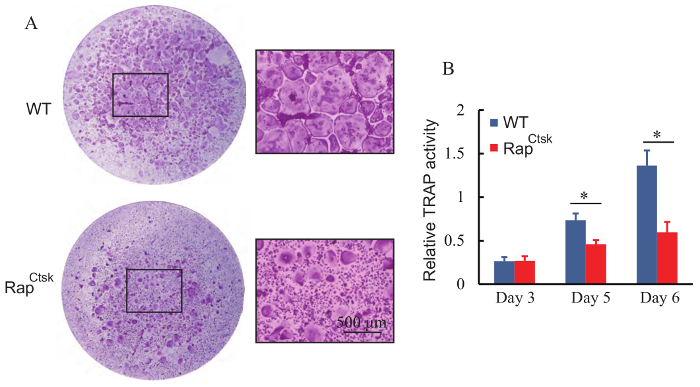 Figure 4: Deletion of Raptor impaired osteoclast formation. (A) TRAP staining of BMMs on day 6. High magnification images of the squares in WT and RapCtsk groups are shown, respectively. There were less giant, TRAP positive osteoclasts formed in the RapCtsk BMMs in comparison with WT group. (B) TRAP activity of cultured WT and RapCtsk BMMs. Data represent means ± S.D.* P <0.05, n = 3. Please click here to view a larger version of this figure.

The osteoclastogenic assay is the most widely used method to isolate and culture osteoclasts in vitro12,13. While several RANKL-based osteoclast inductions have been described13,14,15, the present study described a protocol with some modifications based on the previous methods.

In the previous study, BMMs were plating immediately after isolation14,15. We recommended that BMMs were cultured with basic medium overnight before plating to isolate BMMs from mesenchymal stem cells and fibroblasts which immediately adhere to the dish. M-CSF can promote the proliferation of monocytes to osteoclast precursors and stimulate osteoclast precursors to express RANK that binds RANKL and then induces the formation of mature osteoclasts6,16,17. Therefore, in our study, the BMMs were induced with 10 ng/mL M-CSF for 3 days before osteoclast induction, instead for osteoclast induction on the second day after plating15. The cell density is critical for osteoclast formation in vitro. It is recommended that 25,000 BMMs were seeded in each well of a 96-well plate following by 3 days incubation with 10 ng/mL M-CSF. When the cell confluence reached 80–90%, it is a suitable time for osteoclast induction of RANKL. Usually, mature osteoclasts form on day 6. The most common reason for few osteoclasts is suboptimal cell density, which can be the result of a low seeding density or low cell viability. BMMs are delicate primary cells and need to be treated gently. Keeping the bone on ice for a long time or resuspending vigorously decreases the viability of BMMs and subsequently impairs the formation of osteoclasts. Thus, the optimal seeding density of viable BMMs is critical for obtaining a large number of osteoclasts.

mTOR is an evolutionarily-conserved protein kinase that can regulate cell metabolism and differentiation9. In this study, we found that mTORC1 played an important role in bone resorption by regulating osteoclast formation. mTORC1 may be a potential pharmacological target for the treatment of bone metabolic disorders such as osteoporosis in the future.

In summary, our protocol for osteoclast induction successfully resulted in a large number of giant osteoclasts in vitro and our data suggest that mTORC1 is critical for osteoclast formation.

All authors state that they have no conflicts of interest.

The authors thank Dr. Minghan Tong and S. Kato for kindly providing reagents and mice. We thank the members of the Zou lab for useful discussions. This work was supported in part by grants from 973 Program from the Chinese Ministry of Science and Technology (MOST) [2014CB964704 and 2015CB964503], Clinical Research Program of 9th People's Hospital, Shanghai Jiao Tong University School of Medicine. Thanks for the help of Core Facility for Cell Biology and Core Facility for Chemical Biology, CAS Center for Excellence in Molecular Cell Science, Shanghai Institute of Biochemistry and Cell Biology, Chinese Academy of Sciences. 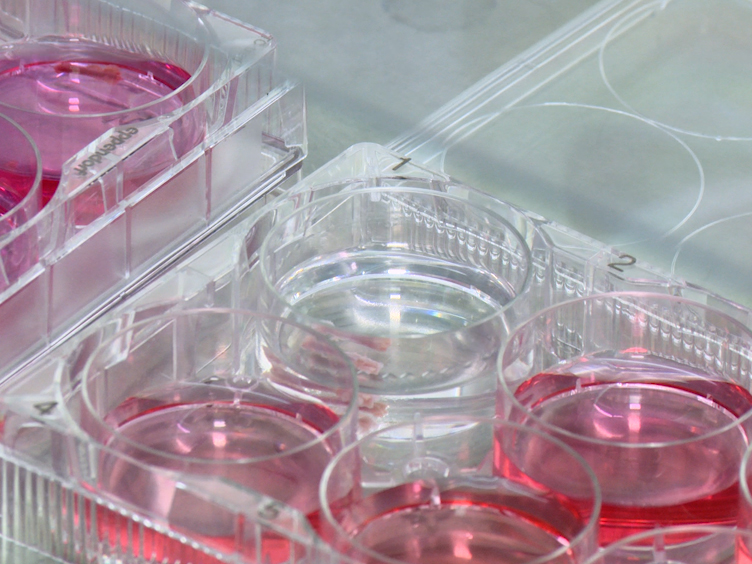