Bone marrow stromal cells (BMSCs) constitute a cell population routinely used as a representation of mesenchymal stem cells in vitro. They reside within the bone marrow cavity alongside hematopoietic stem cells (HSCs), which can give rise to red blood cells, immune progenitors, and osteoclasts. Thus, extractions of cell populations from the bone marrow results in a very heterogeneous mix of various cell populations, which can present challenges in experimental design and confound data interpretation. Several isolation and culture techniques have been developed in laboratories in order to obtain more or less homogeneous populations of BMSCs and HSCs invitro. Here, we present two methods for isolation of BMSCs and HSCs from mouse long bones: one method that yields a mixed population of BMSCs and HSCs and one method that attempts to separate the two cell populations based on adherence. Both methods provide cells suitable for osteogenic and adipogenic differentiation experiments as well as functional assays.

Primary murine BMSCs are commonly used as an in vitro model of mesenchymal stem cells since their discovery in the early 1980s1. Indeed, cultures of plastic-adherent cells flushed from the bone marrow cavity of long bones maintain the capacity to be differentiated into osteoblasts, osteoclasts, chondrocytes, or adipocytes in many studies2,3,4,5. However, the bone marrow is a unique tissue composed of many different cell populations including, but not limited to, BMSCs, HSCs, endothelial, and immune cells. Thus, isolation and culture techniques can yield cell populations with different homogeneity. Using such techniques to test the differentiation potential from cells can be challenging. For example, when comparing cells from mice with different genotypes, starting with a mixed cell population limits the interpretation of the data. Conversely, obtaining homogenous populations of BMSCs and HSCs can be technically difficult and may not be as representative of an ex vivo model.

In our laboratory, we are primarily interested in the utilization of BMSCs due to their potential to be differentiated into osteoblasts, osteoclasts, and adipocytes. Here, we present techniques of BMSCs and HSCs isolation and culture used to assess osteoblastogenesis or adipogenesis in vitro, as well as cultures of HSCs to differentiate into osteoclasts. One method uses a mixed population of Bone Marrow Cells (BMCs) containing BMSCs and HSCs directly suitable for adipogenesis, osteoblastogenesis, and osteoclastogenesis (called Total BMCs). This method is a closer ex vivo representation of the heterogeneity found amongst the cells of the bone marrow microenvironment. Another method separates adherent from non-adherent cells in an attempt to culture "purer" populations of BMSCs and HSCs (called Adherent BMSCs). The later method allows the cell culture experiments to start with a more accurate number of BMSCs or HSCs and reduces the potential of complex indirect effects of other cell populations that remain in the culture. Both methods have been previously published and used to address different research questions6,7,8,9.

All experimental procedures were approved by the Institutional Animal Care and Use Committee at the Maine Medical Center Research Institute.

2. Harvest of Bones from Mice

5. Plating and Culture of the Split Population of BMSCs (Adherent BMSCs)

7. Differentiation of HSCs into Osteoclasts

Overview of the Cell Cultures
The two culture techniques allow the assessment of differentiation on a mixed population of BMCs comprised of BMSCs and HSCs (Total BMCs, Figure 1A) or a population of BMSCs split from HSCs (Adherent BMSCs, Figure 1B). 48 hr after the cells from the marrow are isolated and plated (Figure 1C), they rapidly attach to the bottom of the plastic culture plate and tend to form a monolayer. Once the cells reach confluence (Figure 1D), they can be used for differentiation assays.

BMSCs Differentiated into Adipocytes
Adipogenesis can be tested on cultures of mixed BMCs as well as on the more homogenous cell population. As observed with osteoblast differentiation, whether the mixed populations (Figure 3A) or the split populations (Figure 3B) are used, only a proportion of the cells are adipogenic. Adipocytes appear round with multiple lipid vacuoles that can be stained in red with ORO (Figure 3C). In our experience, in vitro adipocytes always appear multi-vacuolated unlike in vivo white adipocytes. Differences in genotype or culture conditions might increase adipogenesis to a point where adipocytes detach and float in the culture plate. To resolve this, the adipogenesis experiment can be stopped at an earlier time point.

HSCs Differentiated into Osteoclasts
Osteoclastogenesis can be induced in the cultures by supplementing the media with mCSF and RANKL. HSCs start to fuse rapidly to form multinucleated cells that stain positive for TRAP (Figure 4A). Those osteoclasts are capable of resorbing mineral matrix in vitro and thus can be used to assess osteoclastic activity (Figure 4B). 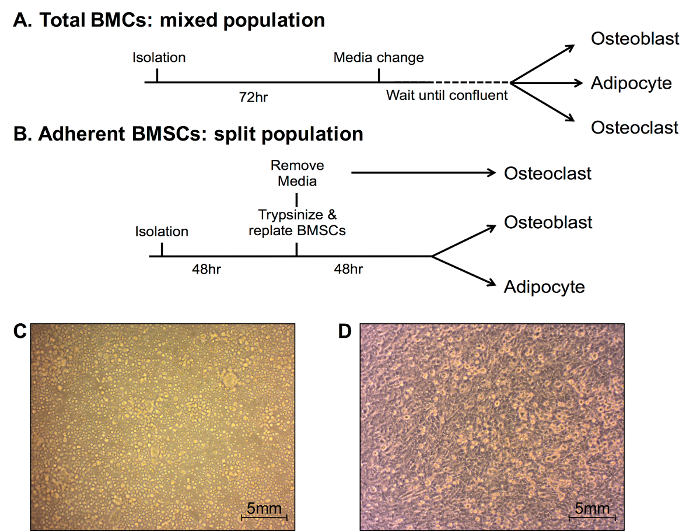 Figure 1: Schematic timeline of the protocols for the culture of BMSCs and HSCs. Different culture techniques to yield Total BMCs composed of a mixed population of cells (A) or Adherent BMSCs (B). Representative image of BMSCs culture isolated from C57B6/J mice 48 hr after their plating (C) and after they are split from HSCs (D). Please click here to view a larger version of this figure. 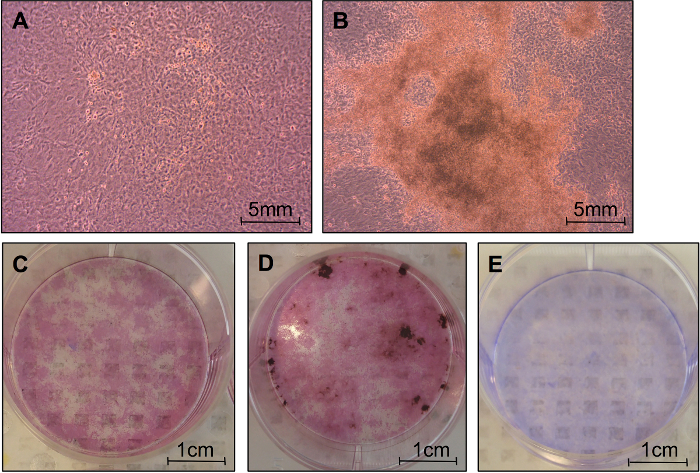 Figure 2: Images of wells of BMSCs cultures differentiated into osteoblasts. BMSCs before (A) and after (B) being placed in osteogenic media. Osteoblasts can be stained for alkaline phosphatase expression in pink (C) and for mineral deposit in brown (D). Crystal violet can be used in order to represent cell number after differentiation (E). Please click here to view a larger version of this figure. 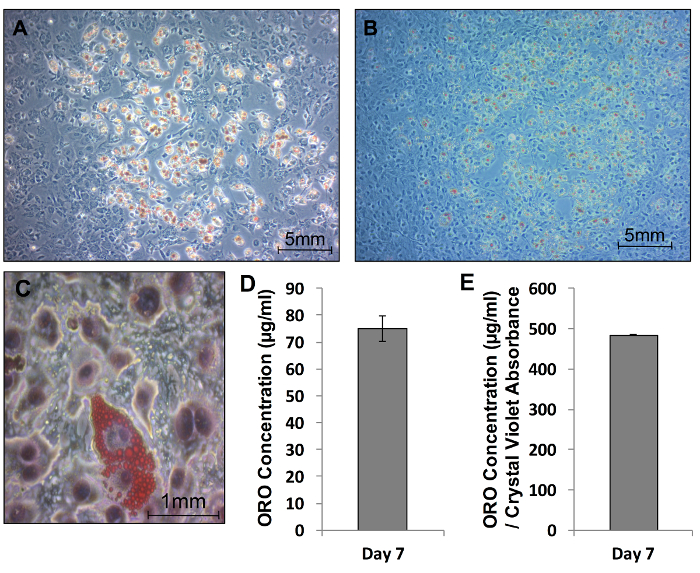 Figure 3: Representative images of the cultures of BMSCs differentiated into adipocytes. ORO-stained adipocytes obtained from a mixed population of BMSCs (A) and a split culture (B) after 7 days in adipogenic media. Image of an adipocyte stained with ORO (C). Quantification of ORO after 7 days in adipogenic media before (D) and after (E) normalization to crystal violet absorbance. Data are presented as means with error bars representing standard error of the mean. Please click here to view a larger version of this figure.

Figure 4: HSCs cultures differentiated into osteoclasts. TRAP staining of osteoclasts appearing as large purple-pink multinucleated cells (A). Mineralized surface stained in black by Von Kossa with resorption pits left by osteoclasts differentiated from HSCs after 7 days (B). Please click here to view a larger version of this figure.

In this article, two methods of culture of BMSCs are presented with their advantages and limitations. Isolating cells coming from the bone marrow is a relatively effortless process. However, obtaining a cell population representative of the mesenchymal stem cells or osteoclastic progenitors can be challenging due to the diverse cellular environment of the marrow cavity.

Culturing the entirety of the bone marrow contents provides a close representation of the in vivo microenvironment. Yet, isolating cells from different groups of mice (genotypes, treatments, ages, etc.) can result in a very different number of BMSCs or HSCs at the inception of the in vitro experiment. Therefore, separating BMSCs and HSCs and re-plating them allow a better control over the cell number at the start of the differentiation experiment. However, reducing the heterogeneity of the cell culture might affect the outcomes of the BMSCs or HSCs as both secrete factors that influence mesenchymal and osteoclastic differentiation. It is important to consider those limitations when designing the isolation and the culture of the BMSCs and HSCs.

The multitude of cell populations present in the bone marrow can introduce challenges in the interpretation of the data. In addition to HSCs and BMSCs, the bone marrow microenvironment also contains differentiated immune cells, red blood cells, endothelial cells,etc. Those populations may remain in the adherent or non-adherent fraction and thus can affect the experimental outcomes. Sorting BMSCs can be an option in order to achieve a "purer" cell population. Indeed, BMSCs are thought to express CD34 while HSCs do not10. However, it was also suggested that the lack of CD34 on the surface of BMSCs may be the result of culture and a study has shown that a non-adherent subset of CD34+ BMSCs could differentiate into osteoblast, adipocytes and chondrocytes11,12. Therefore, when considering sorting to isolate BMSCs, an array of well-defined markers should be designed beforehand. Other obstacles to cell sorting are timing and cost. Indeed, adding a sorting step could increase the time of the isolation protocol considerably as well as a significant increase in cost. In summary, sorting cells present technical challenges that may reduce the yield and quality of BMSCs.

The authors disclose that they have no financial conflict of interests. 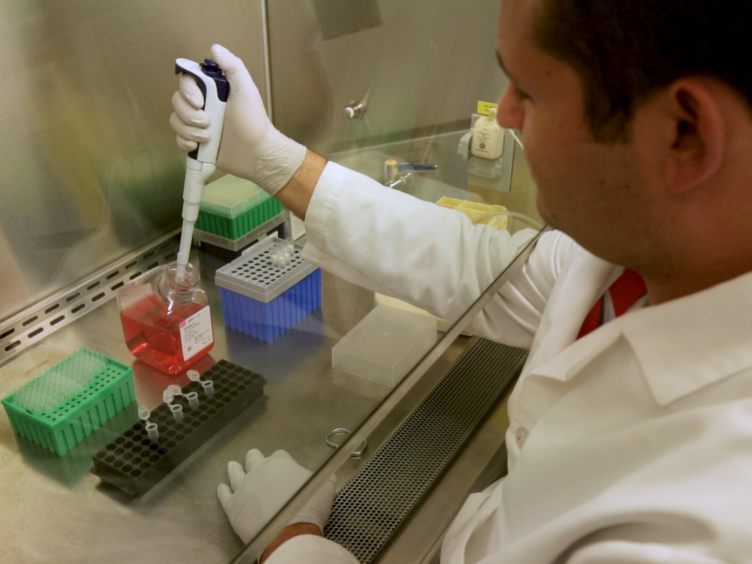