This article describes a detailed methodology for random mutagenesis of a target gene in fission yeast. As an example, we target rpt4+, which encodes a subunit of the 19S proteasome, and screen for mutations that destabilize heterochromatin.

Random mutagenesis of a target gene is commonly used to identify mutations that yield the desired phenotype. Of the methods that may be used to achieve random mutagenesis, error-prone PCR is a convenient and efficient strategy for generating a diverse pool of mutants (i.e., a mutant library). Error-prone PCR is the method of choice when a researcher seeks to mutate a pre-defined region, such as the coding region of a gene while leaving other genomic regions unaffected. After the mutant library is amplified by error-prone PCR, it must be cloned into a suitable plasmid. The size of the library generated by error-prone PCR is constrained by the efficiency of the cloning step. However, in the fission yeast, Schizosaccharomyces pombe, the cloning step can be replaced by the use of a highly efficient one-step fusion PCR to generate constructs for transformation. Mutants of desired phenotypes may then be selected using appropriate reporters. Here, we describe this strategy in detail, taking as an example, a reporter inserted at centromeric heterochromatin.

Forward genetics is a classical method in which researchers seek naturally occurring mutants that display a particular phenotype, and perform genetic analyses. In reverse genetics, mutations are introduced into a gene of interest and the phenotype is examined. In the latter case, random mutagenesis of a target gene is often used to generate a pool of mutants that are subsequently selected for desired phenotypes, such as temperature sensitivity or altered enzymatic activity. Various methods may be used to achieve random mutagenesis, including error-prone PCR1; UV irradiation2; chemical mutagens, such as ethyl methanesulfonate (EMS) or nitrous acid3; the use of temporary mutator strains, such as those over-expressing mutD5 4; and DNA shuffling5.

Here, we describe a reverse-genetics strategy in which we utilize error-prone PCR to generate mutant pools for a target gene in the fission yeast. As one might guess from its name, this method generates mutations by deliberately introducing errors during PCR. Unlike other mutagenesis methods, error-prone PCR allows the user to define the region to be mutagenized. This makes it particularly useful in efforts to study the function of a protein/domain of interest.

To demonstrate this random mutagenesis procedure, we herein use rpt4+, which encodes the 19S proteasome subunit, as an example. Rpt4 has been shown to have proteolysis-independent functions in organisms other than fission yeast6,7,8,9, and a defect in proteolysis could cause indirect effects by altering proteins levels. We, therefore, screened for mutants that triggered proteolysis-independent changes, with the goal of investigating the function of the proteasome on heterochromatin.

Error-prone PCR can be applied to any gene region by tuning the location at which the primers bind. Mutants that exhibit the desired phenotypic change can be identified with appropriate reporters. Here, we utilized an ade6+ reporter inserted at the centromere 1 outer repeat (otr) region10. Constitutive heterochromatin is formed at this region11, so the ade6+ reporter is silenced in the wild-type condition; this is indicated by red colonies10. A mutation that destabilizes the constitutive heterochromatin at the centromere will lead to the expression of the ade6+ reporter, which is visualized as white colonies.

6. Generation of the Transformation Construct by Fusion PCR (Figure 1E)

8. Selection of Heterochromatin-destabilizing Mutants and Checking for False Positives

The acquired Rpt4 mutants by following the procedures described in Figure 1 can be analyzed by assessing the colors of the colonies. The colors of the colonies are spotted onto the relevant plates in decreasing cell number in Figure 2. The ade6+ reporter inserted at the heterochromatin region is silenced in wild-type and shows red colonies in YES-Ade plate. Once the heterochromatin is destabilized and the ade6+ reporter is expressed, white colonies can be observed in YES-Ade plate as in clr4Δ mutant. The screened Rpt4 mutants are as shown. rpt4-1 mutant shows the most severe heterochromatin destabilization. 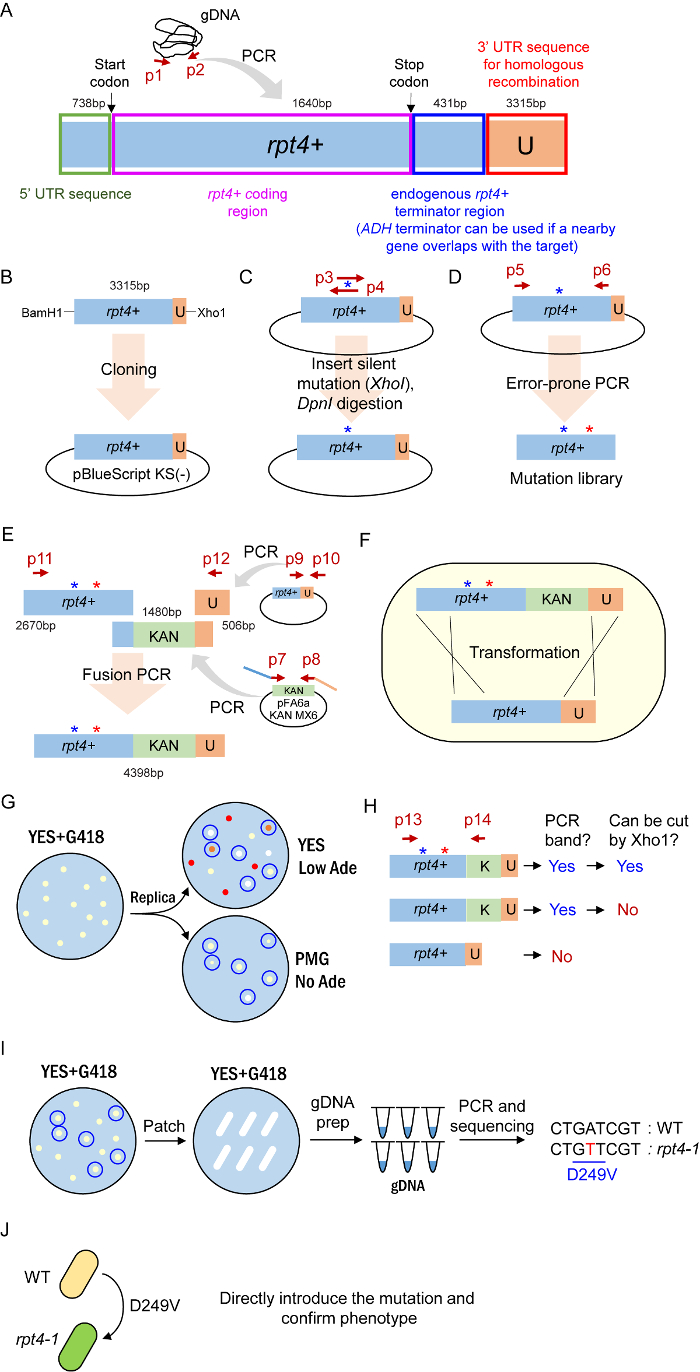 Figure 1: Schematic representation of the protocol. (A) Schematic representation of the PCR product obtained by the first round of PCR, which is performed with primers 1 and 2. (B) Restriction-based cloning of the rpt4+ fragment. (C) Site-directed mutagenesis of the cloned vector is used to introduce a silent mutation that adds an XhoI restriction site. (D) Random mutagenesis of the rpt4+ coding region is performed using error-prone PCR. (E) The mutated rpt4+ fragment, the KAN fragment, and the 3'UTR fragment are joined by fusion PCR to generate a transformation-ready cassette. (F) Fission yeast cells are transformed with the fusion PCR construct, which replaces the endogenous rpt4+ sequence by homologous recombination. (G) KAN-selected colonies are replica plated to YES-Ade (Low Ade) and PMG-Ade (No Ade) plates, and positive colonies are selected. (H) PCR and subsequent XhoI restriction of the PCR product are used to avoid false positives. (I) The mutation that causes the phenotype is identified by patching of the selected colonies, propagation of cells, extraction of genomic DNA (gDNA), and sequencing of the relevant portion of rpt4+. (J) Causative mutations are confirmed (and false positives are ruled out) by directly introducing the mutation to wild-type cells. Please click here to view a larger version of this figure.

Figure 2: Heterochromatin de-repression mutants of Rpt4. Schematic diagram of the otr1::ade6+ reporter (top). 5-fold serial dilutions of select screened Rpt4 mutants were spotted onto the indicated plates in order of increasing level of heterochromatin destabilization (bottom). This figure was modified from the article 'The 19S proteasome is directly involved in the regulation of heterochromatin spreading in fission yeast' by Seo et al., 201724. The non-cropped figure can be found in the original article. Please click here to view a larger version of this figure.

Table 5. Changes needed when the ADH terminator is used instead of the endogenous terminator

Table S2: List of primers used in this study

Random mutagenesis via error-prone PCR is a powerful tool for generating a diverse pool of mutants in a given region. This technique is especially useful for studies that seek to assess the function of a protein under a specific circumstance. For example, we herein used error-prone PCR to assess the function of the 19S proteasome subunit, Rpt4, in heterochromatin maintenance. By varying the region targeted by the error-prone PCR and adjusting the screening conditions, we were able to mutate cells at the genomic region of interest and screen for the desired phenotype. Recently, a similar method was used to isolate fission yeast cells harboring mutations in the spindle pole body component25.

The key advantage of random mutagenesis is that it may be applied to both non-essential and essential genes. Random mutagenesis of essential genes may yield diverse mutants, such as those with subtle and/or partial functional defects that allow cell viability to be sustained, or mutants whose functions are affected only under a specific condition. An example of the latter is a temperature-sensitive mutant. Such mutants may be isolated using 5 mg/L phloxine B, which stains dying cells in red and enables slow-growing cells to be distinguished from dying cells26.

The critical step of this protocol is the error-prone PCR step. At this step, it is important to control the mutation frequency, which can vary widely depending on the number of PCR cycles and the initial amount of template. We recommend that the user fix the number of PCR cycles and vary the initial amount of template, as we found this to be a more convenient strategy for optimization. We note that the technique of error-prone PCR has been widely available for decades. If the user chooses, they may seek a method for manually performing error-prone PCR27 without using a commercially available mutagenesis kit.

Funding support for this project was provided by the Basic Science Research Program through the National Research Foundation of Korea (NRF) funded by the Ministry of Science and ICT (2016R1A2B2006354). 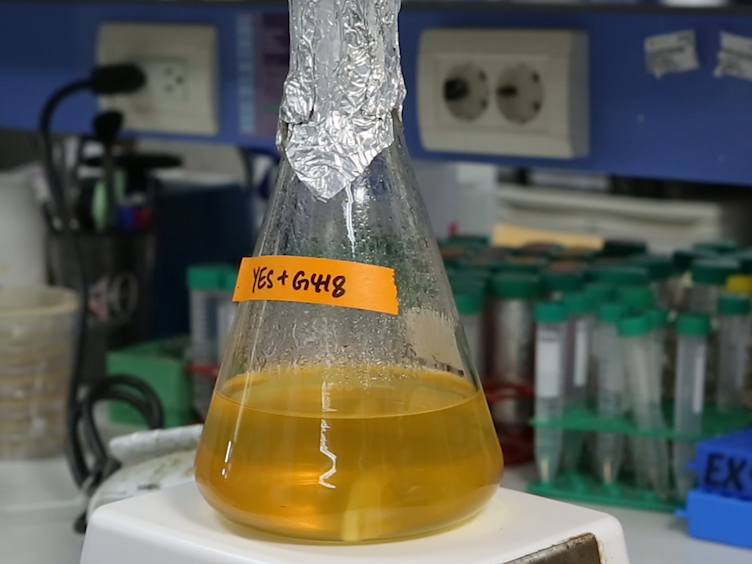