Mice exposed to intraperitoneal LPS secrete exosomes in Broncho-alveolar lavage (BAL) fluid that are packaged with miRNAs. Using a co-culture system, we show that exosomes released in the BAL fluid disrupt expression of tight junction proteins in bronchial epithelial cells and increase expression of pro-inflammatory cytokines that accentuate lung injury.

Acute lung injury (ALI) and acute respiratory distress syndrome (ARDS) represent a heterogeneous group of lung diseases which continues to have a high morbidity and mortality. The molecular pathogenesis of ALI is being better defined; however, because of the complex nature of the disease molecular therapies have yet to be developed. Here we use a lipopolysaccharide (LPS) induced mouse model of acute septic lung injury to delineate the role of exosomes in the inflammatory response. Using this model, we were able to show that mice that are exposed to intraperitoneal LPS secrete exosomes in Broncho-alveolar lavage (BAL) fluid from the lungs that are packaged with miRNA and cytokines which regulate inflammatory response. Further using a co-culture model system, we show that exosomes released from macrophages disrupt expression of tight junction proteins in bronchial epithelial cells. These results suggest that 1) cross talk between innate immune and structural cells through the exosomal shuttling contribute to the inflammatory response and disruption of the structural barrier and 2) targeting these miRNAs may provide a novel platform to treat ALI and ARDS.

ALI and ARDS are the life-threatening forms of respiratory failure with severe hypoxemia caused by non-cardiogenic pulmonary edema which affects approximately 1 million people worldwide annually1. The etiology of ARDS includes direct injury to the lungs from infections or aspiration and a variety of indirect insults. Over the last decade there has been an increased understanding of the molecular pathogenesis of ARDS, however, specific targeted treatments for ARDS are yet to be developed2,3.

Several animal models of acute lung injury have been developed which provide a bridge for translating experimental therapies to human studies4,5. Commonly used models include local installation of oleic acid, bacteria, LPS, and bleomycin. Other approaches include ischemia-reperfusion, cecal ligation puncture, mechanical ventilation-induced stretch injury, hyperoxia or systemic administration of bacteria and LPS5. These models provide a useful biological system to test clinical hypotheses and for the development of potential therapies. To simulate human ARDS, animal models should reproduce inflammation and acute injury to the epithelial and endothelial cells with defects in barrier function in the lungs.

Exosomes are membrane vesicles with 20 - 200 nm in diameter, whose molecular content contains proteins, DNA, RNA, and lipids, and facilitate inter-cellular communications in tissue microenvironment via molecular composition transfer. Exosomes are secreted by multiple types of cells, such as endothelial cells, epithelial cells, smooth muscle cells and tumor cells, and exist in human body fluid. Studies indicate that exosomes regulate cross-talk between immune cells and stromal cells during infectious and sterile inflammatory diseases, and their abnormal release appears to be regulated by various natural and experimental stimuli during physiological and pathological processes6. Such communication network may play an important role in the pathogenesis of lung diseases and may affect pathophysiological progression7,8. As 18 - 22 nucleotide non-coding RNAs, miRNAs exist in both tissue and body fluids, plasma, sera, and modulate mRNA expression at post-translational level9,10.

Packaged miRNAs in exosomes influence differentiation and function of multiple types of cells, and excessive levels are associated with a variety of diseases, including cancer, lung diseases, obesity, diabetes, and cardiovascular disease11,12,13,14,15,16. Entry into the recipient cells and shuttling of exosomal miRNAs facilitate intercellular communications modifying the hemostasis of microenvironment17,18. Acute lung-injury is a complex processes, involving multiple cell types with extensive intercellular communications through exosomes8. miR-155 and miR-146a share the common transcriptional regulatory mechanism and contribute to the inflammatory response and the immune tolerance19,20. Recent studies indicate that both modulate inflammatory response via exosomal miRNAs shuttling between immune cells21. However, the molecular mechanisms underlying modulatory effects of exosomal miRNAs on alveolar response to endotoxin remain unclear, undoubtedly the potential clinical relevance and translational implication merit further investigation.

Co-culture models are being employed to define the interaction of the specific cell types in the complex environment, such as inflammation and cancer22,23. These platforms provide an alternative strategy to interrogate cross talk between cell types particularly for immune and structural cells.

Intra-tracheal, aerosolized, intraperitoneal or systemic administration of LPS are widely used to induce experimental lung injury24,25,26, and have shown to induce epithelial and endothelial permeability defects. Here we use intraperitoneal LPS to induce a septic model of acute lung injury in mice. Within 24 h of intraperitoneal administration of LPS, permeability defects are induced in the lungs with recruitment of inflammatory cells. Further, we show that exosomes from BAL contain miRNA-155 and miR-146a, and exosomes from BAL fluid induce pro-inflammatory cytokines expression in recipient epithelial cells, including IL-6 and TNF-α. These data are the first to show that exosomal miRNAs are secreted in BAL in this model of acute septic lung injury.

The overall protocol requires 2 days, including the first day of sepsis induction and isolation of BAL fluid from the animal, and the second day for exosomes isolation from the mouse BALF. All procedures have been reviewed and approved by the Institutional Animal Care and Use Committee at Atlanta VA medical center.

Note: miRNA-q-RT-PCR is recommended to analyze expression level of miRNAs.

5. Validation of Exosomes Up Taken by Recipient Cells

6. Verification of Interaction between Exosomes and Recipient Cells

To induce septic lung injury, mice were treated with intraperitoneal LPS (15 mg/kg). Within 24 h of LPS administration, neutrophilic influx was seen in the lungs, as shown in Figure 1A. Mouse BAL fluid was drawn, followed by isolation and purification of exosomes. Morphology of BALF exosomes was confirmed by electron transmission microscopy (Figure 1B).

To define the functional effects of exosomes, mouse bronchial epithelial cells (MLE12 cells) were treated with purified exosomes extracted from BAL fluid of mice treated with LPS or PBS, respectively. First, we proved entry of BALF exosomes into recipient epithelial cells. BALF exosomes were labeled with PKH-67, and co-cultured with MLE12 cells, and then fluorescence microscope images show the uptake of exosomes by epithelial cells (Figure 3A). Expression of pro-inflammatory mediator, TNF-α and IL-6 were significantly increased in epithelial cells that were co-cultured with exosomes from LPS treated mice, compared to control group (TNF-α, 1 ± 0.13 vs 5.01 ± 0.22; IL-6, 1 ± 0.02 vs 1.72 ± 0.17) (Figure 3B). We also determined the expression of tight junction protein ZO-1 as a surrogate for epithelial integrity. Cells that were treated with exosomes from LPS treated mice showed a significantly attenuated expression of ZO-1, compared to LPS treated control mice (ZO-1, 1 ± 0.12 vs 0.66 ± 0.13) (Figure 3C).

Figure 2: Exosomal miRNAs expression in BAL fluid isolated from LPS-treated mice. C57BL/6J mice were challenged with intraperitoneal LPS. Expression of selective microRNAs were analyzed through q-RT-PCR and normalized to U6 expression. A) miR-155; B) miR-146a. n = 5 mice per group. Student's test, *P <0.05. Please click here to view a larger version of this figure. 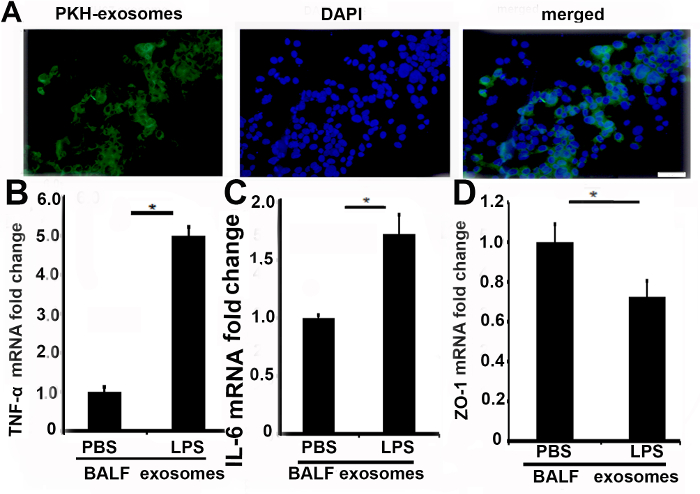 Mouse models of diseases are commonly used to evaluate the physiological function of specific genes and to reduce the cost of experimentation2. The acute septic lung injury described here mimics inflammatory response seen in humans with ARDS. This model is relevant to investigate the molecular pathogenesis, development of biomarkers and to test potential new therapies5.

Co-culture systems are relevant for in vivo studies in the context of investigating potential mechanisms of transfer of biological molecules such as RNA, DNA, lipids, and protein in an in vitro system23,30. Some of these platforms have great utility in the assessment of mechanistic understanding and development of therapies for complex diseases22,23. As shown here the exosomes from lavage cells (macrophages, neutrophils) can impact the integrity of structural epithelial cells through transfer of exosomes.

The pathobiological effects of exosomes are emerging as critical aspect in human diseases both from the diagnostic and the therapeutic standpoint and understanding disease pathogenesis31,32. To isolate exosomes from biological fluids, the most commonly-used technique includes differential centrifugation coupled with ultracentrifugation as described here33,34. This technique has several strengths, although is limited by the fact that it can be time-consuming and the risk of contamination with non-exosomal proteins. Novel approaches have been proposed to overcome these limitations, such as the exosome isolation by the density gradient or the immune-affinity or the size-dependent method35. Exosomes are being investigated in clinical studies as biomarkers for diagnosis and prognosis, and development of targeted therapies.

The authors have declared no conflict of interest. 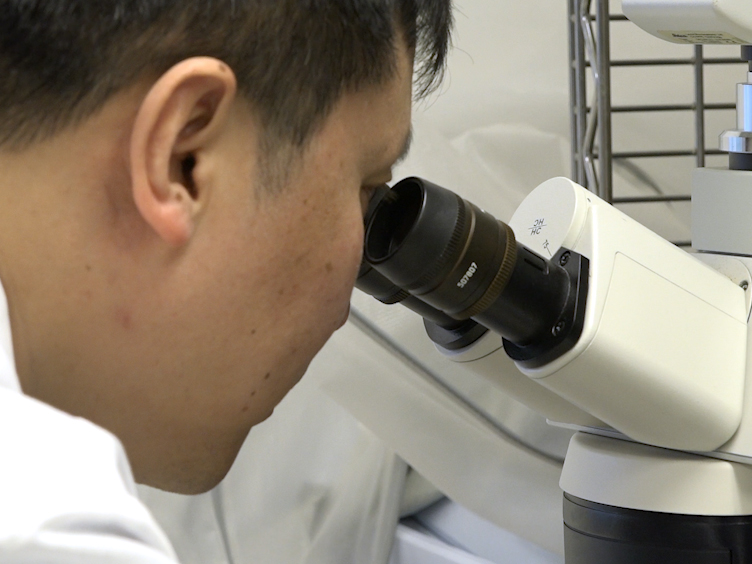