Here we present a protocol describing the technique of veno-venous extracorporeal membrane oxygenation (ECMO) in a non-intubated, spontaneously breathing mouse. This murine model of ECMO can be effectively implemented in experimental studies of acute and end-stage lung diseases.

The use of extracorporeal membrane oxygenation (ECMO) has increased substantially in recent years. ECMO has become a reliable and effective therapy for acute as well as end-stage lung diseases. With the increase in clinical demand and prolonged use of ECMO, procedural optimization and prevention of multi-organ damage are of critical importance. The aim of this protocol is to present a detailed technique of veno-venous ECMO in a non-intubated, spontaneously breathing mouse. This protocol demonstrates the technical design of the ECMO and surgical steps. This murine ECMO model will facilitate the study of pathophysiology related to ECMO (e.g., inflammation,bleeding and thromboembolic events). Due to the abundance of genetically modified mice, the molecular mechanisms involved in ECMO-related complications can also be dissected.

Extracorporeal membrane oxygenation (ECMO) is a temporary life support system that takes over functions of the lungs and heart to allow adequate gas exchange and perfusion. Hill et al1 described the first use of ECMO in patients in 1972; however, it only became widely used after its successful application during the H1N1 influenza pandemic in 20092. Today, ECMO is routinely used as a lifesaving procedure in end-stage heart and lung diseases3. Veno-venous ECMO is increasingly employed as an alternative to invasive mechanical ventilation in awake, non-intubated, spontaneously breathing patients with refractory respiratory failure4.

Despite its widespread adoption, diverse complications have been reported for ECMO5,6,7. Complications that can be experienced by patients on ECMO include bleeding, thrombosis, sepsis, thrombocytopenia, device-related malfunctions, and air embolism. Moreover, a systemic inflammatory response syndrome (SIRS) resulting in multi-organ damage is well-described both clinically and in experimental studies8,9. Neurological complications such as brain infarction are also frequently reported in patients undergoing long-term ECMO therapy. To confuse matters, it is often difficult to distinguish whether complications are caused by ECMO itself or arise from the underlying disorders accompanying acute and end-stage diseases.

To specifically study the effects of ECMO on a healthy organism, a reliable experimental animal model must be established. There are very few reports on performance of ECMO on small animals and are all limited to rats. To date, no mouse model of ECMO has been described in the literature. Due to the availability of a large number of genetically modified mouse strains, establishment of a mouse ECMO model would allow further investigation of the molecular mechanisms involved in ECMO-related complications10,11.

Based on our previously described murine model of cardiopulmonary bypass (CPB)12, we have developed a stable method of veno-venous ECMO in non-intubated, spontaneously breathing mice. The ECMO circuit (Figure 1), containing outflow and inflow cannulas, a peristaltic pump, oxygenator, and air-trapping reservoir, is similar to our previously described model of murine CPB12 with the exception of having a smaller priming volume (0.5 mL). This protocol demonstrates the detailed techniques, physiological monitoring, and blood gas analysis involved in a successful ECMO procedure.

Experiments were performed on male C57BL/6 mice, aged 12 weeks. This study was conducted in compliance with guidelines of the German Animal Law under Protocol TSA 16/2250.

NOTE: For a schematic of the complete ECMO circuit, see Figure 1.

This protocol describes the method of veno-venous ECMO in a mouse. This model is reliable and reproducible, and compared to our previously described model of CPB with respiratory and circulatory arrest12,13, it is less technically demanding to establish.

ECMO flow in the venous system was maintained between 1.5 and 5 mL/min. The mean arterial pressure was kept between 70 and 85 mmHg by adding extra priming solution into the ECMO circuit. Usually, the adding of 0.1 mL of priming solution to the circuit during ECMO allows substitution of blood volume. All volume substituting or buffering solutions were given via the femoral artery or air-trapping reservoir.

Physiological parameters were recorded every 10 min and data from a representative ECMO experiment are presented in Figure 2. BGA data from a successful ECMO are shown in Table 1.

Hematological parameters showed relevant hemodilution during ECMO; however, no blood transfusion was necessary to compensate for moderate anemia (Table 1). Oxygenation parameters from BGA demonstrated proper performance of the oxygenator at an oxygen/air mixture at FiO2 1.0 (Table 1).

Metabolic changes during ECMO showed respiratory alkalosis at the start and moderate acidosis at the end of the experiment (Table 1). No extra buffering of the blood was performed. 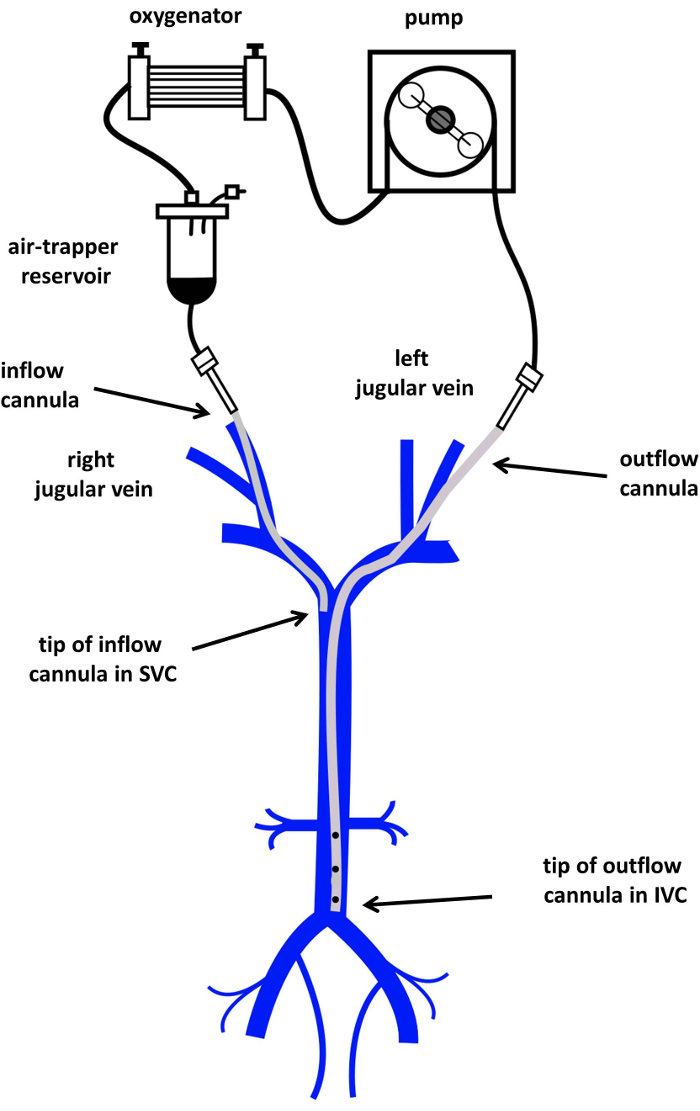 Figure 2: Physiological parameters measured during 2 h of ECMO. A = heart rate, B = mean arterial pressure (VS = volume substitution), and C = rectal temperature. Please click here to view a larger version of this figure.

Previously, we described a successful model of CPB in a mouse12,13. To implement such a model for acute or end-stage lung disorders we developed an easy-to-use veno-venous ECMO circuit for mice. Different to the CPB model, veno-venous ECMO does not require complicated surgical procedures such as sternotomy and clamping of the aorta, thus reducing the risk of wound bleeding in a fully heparinized animal. To avoid embolization of the oxygenator with blood clots, 2.5 IU of heparin/kg is given to each animal. This dose was based on previous measurements of the activated clotting time (ACT) that showed full anticoagulation of the blood (ACT > 800 sec). Due to the absence of heparin coating in the micro-oxygenator, our anticoagulation protocol was kept similar to our CPB procedure.

In comparison to the CPB circuit, we could reduce the overall priming volume to 0.5 mL by reducing the volume of the air-trapper and micro-oxygenator. Moreover, a slower flow was necessary to keep adequate oxygenation of the animal. Intravasal loss of the blood volume resulted in a gradual drop of mean arterial pressure. Adding an extra 0.1 mL of priming volume to the animal led to an increase in blood pressure over 20 mmHg, but a small linear reduction in arterial pressure over the next 30 min was always present. Volume substitution was called for if air was sucked through the drainage cannula or there was a drop in blood pressure below 75 mmHg.

In preliminary trials, we performed cannulation via the femoral vein. Unfortunately, only a 1-Fr cannula can be placed into the femoral vein, which results in inadequate blood flow (≤ 1 mL/min). 1-Fr catheters pushed into the IVC all displayed insufficient backflow. To achieve substantial backflow, both femoral veins would need to be cannulated; therefore, we abandoned this procedure and achieved adequate draining via a 2-Fr cannula placed in the IVC via the jugular vein. Blood loss during placement of the cannula into jugular vein is very typical. Therefore, before placement, the head end of the animal pad is raised 30-40°, so backflow from the vein is significantly reduced.

A gradual reduction in hemoglobin and hematocrit is explained by hemolysis and repetitive blood samplings taken to demonstrate the performance of the device. For survival experiments, to avoid blood transfusions, blood sampling should be extremely limited or even avoided. Moreover, at the end of the experiment, the blood from the ECMO circuit should be returned into the animal. However, survivability of the model has to be studied in a separate project using a less invasive protocol.

Blood flow during our ECMO runs was between 3 and 5 mL/min. Normal mouse cardiac output is reported to be between 6 and 9 mL/min; therefore, on average, we were able to achieve an ECMO flow of 54% of the mouse's cardiac output. Usually, veno-venous ECMO requires lower blood flow compared to veno-arterial ECMO, as overperfusion of the right atrium can lead to right ventricular overload and consequently, heart failure. Clinically, to achieve adequate oxygenation, a veno-venous ECMO flow of 50-75% of cardiac output is enough for sufficient oxygenation in ventilated or spontaneously breathing patients. Unnecessarily increasing the ECMO flow may lead to more damage caused by SIRS and hemolysis and useless recirculation of the major part of the venous blood between the IVC and SVC. Moreover, we observed that by increasing of the flow in the veno-venous ECMO, excessive negative pressure leads to air suction at the site of cannulation. Our animals received 100% oxygen under isoflurane anesthesia, and with the help of veno-venous ECMO, were hyper-oxygenated. In our model we have tried to reproduce conditions of "awake ECMO"4 having less damage to lungs.

The molecular mechanisms involved in ECMO-related complications can now be investigated due to the plethora of genetically modified mouse strains available. There are also more than eighty strains of mice with lung disorders that may simulate ECMO in the context of these underlying diseases. Therefore, we believe that our veno-venous ECMO mouse model may be implemented in multiple synergistic projects.

This project was supported by KFO 311 Grant from Deutsche Forschungsgemeinschaft. 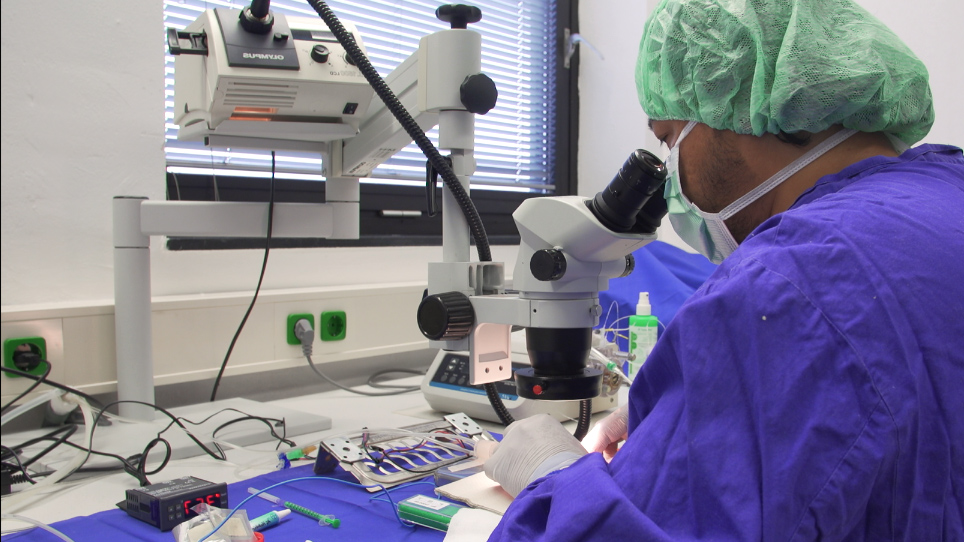