We here present a proven and tested protocol for the purification of chloroplast protein import complexes (TOC-TIC complex) using the TAP-tag. The one-step affinity-isolation protocol can potentially be applied to any protein and be used to identify new interaction partners by mass spectrometry.

Chloroplast biogenesis requires the import of thousands of nucleus-encoded proteins into the plastid. The import of these proteins depends on the translocon at the outer (TOC) and inner (TIC) chloroplast membranes. The TOC and TIC complexes are multimeric and probably contain yet unknown components. One of the main goals in the field is to establish the complete inventory of TOC and TIC components. For the isolation of TOC-TIC complexes and the identification of new components, the preprotein receptor TOC159 has been modified N-terminally by the addition of the tandem affinity purification (TAP) tag resulting in TAP-TOC159. The TAP-tag is designed for two sequential affinity purification steps (hence "tandem affinity"). The TAP-tag used in these studies consists of a N-terminal IgG-binding domain derived from Staphylococcus aureus Protein A (ProtA) followed by a calmodulin-binding peptide (CBP). Between these two affinity tags, a tobacco etch virus (TEV) protease cleavage site has been included. Therefore, TEV protease can be used for gentle elution of TOC159-containing complexes after binding to IgG beads. In the protocol presented here, the second Calmodulin-affinity purification step was omitted. The purification protocol starts with the preparation and solubilization of total cellular membranes. After the detergent-treatment, the solubilized membrane proteins are incubated with IgG beads for the immunoisolation of TAP-TOC159-containing complexes. Upon binding and extensive washing, TAP-TOC159 containing complexes are cleaved and released from the IgG beads using the TEV protease whereby the S. aureus IgG-binding domain is removed. Western blotting of the isolated TOC159-containing complexes can be used to confirm the presence of known or suspected TOC and TIC proteins. More importantly, the TOC159-containing complexes have been used successfully to identify new components of the TOC and TIC complexes by mass spectrometry. The protocol that we present potentially allows the efficient isolation of any membrane-bound protein complex to be used for the identification of yet unknown components by mass spectrometry.

Plants depend on chloroplasts for photosynthesis and photoautotrophic growth1. The vast majority of chloroplast proteins are encoded in the nucleus, synthesized in the cytosol and imported into the chloroplast via the TIC and TOC complexes in the envelope membranes2. The core of the TOC complex consists of the Toc75 protein-conducting channel and the two receptor GTPases Toc33 and Toc1593,4,5. TOC159 is essential for the biogenesis of chloroplasts and mediates the massive accumulation of photosynthesis-associated proteins6. The TIC complex consists of the TIC20 protein-conducting channel as well as TIC110 and TIC407,8. Recently, a 1MD protein translocation complex at the inner envelope membrane was isolated and contained previously unidentified components9, one of which was TIC56. We recently co-isolated TIC56 of the 1 MDa complex using the TAP-TOC159 affinity purification protocol. The data indicated a structural overlap between the "canonical" TOC/TIC complexes and the 1 MDa complex10. Previously unknown components such as KOC1 were also identified as new interaction partners of the TOC and TIC complexes using the TAP-method described here10,11.

Thus, the TAP-tag purification is an efficient method for the isolation of protein complexes and the identification of interacting partners by subsequent mass spectrometric analysis12. The TAP tag consists of two IgG binding repeats separated from a calmodulin-binding peptide (CBP) by a tobacco etch virus (TEV) protease cleavage site. The original method, consisting of an IgG-affinity purification step followed by TEV cleavage and subsequent calmodulin-affinity chromatography permitted the native purification of large and highly pure protein complexes13,14. We have simplified the procedure and demonstrated that the TOC159-containing protein complexes can also be purified efficiently using only the IgG-affinity purification step followed by TEV-cleavage for elution15. In our experience, the omission of the calmodulin-affinity step resulted in higher yields and may therefore be appropriate for low abundance proteins.

In short, we engineered stable transgenic A. thaliana lines expressing TAP-TOC159 in the ppi2 (toc159 KO mutant) background and established it as a reliable source for the purification of TOC-TIC complexes. The protocol for the isolation of the TOC-TIC complex starts with the homogenization of the plant material in a detergent-free buffer. After centrifugation, the supernatant is discarded. The pellet containing the total membrane fraction is solubilized using a detergent-containing buffer. After an ultra-centrifugation step, the supernatant containing solubilized TOC-TIC complexes is applied to the IgG-resin for affinity purification. After several washing steps, elution is carried out using a TEV protease-containing buffer to selectively cleave downstream of the IgG-binding domains and gently release native TOC159-containing complexes. The TEV eluate can be analyzed directly by Western blotting or mass spectrometry to identify the interaction partners of TOC15910,11,15. The method has also been used to identify post-translational modifications of TOC15915. In the future, native TOC159-containing complexes may be used for structural studies using cryoelectron microscopy.

3. Isolation and Solubilization of the Membrane Fraction

We here described a protocol for the purification of a TAP-tagged chloroplast envelope protein complex from transgenic A. thaliana plants. As shown in Figure 1A, plants expressing the 35S:NTAP-TOC159 construct were used to isolate this complex while plants expressing the 35S:NTAP construct were used as a control. Figure 1B shows detailed steps of the purification of TAP-TOC159 protein complexes followed by mass spectrometry to allow the identification of interacting proteins. The immunoblot analysis (Figure 2, right side) confirms that isolated TAP-TOC159 interacts with TOC75 and TOC33 of the TOC complex. The chloroplast outer membrane kinase KOC1 known to phosphorylate TOC159 also co-isolated with the TAP-TOC159 complex (Figure 2B, right side). The presence of TIC110 reveals that the isolated TAP-TOC159 complex also contains the components of the TIC complex. The FBN1A antibody raised against a plastoglobule protein unrelated to protein import did not recognize the TAP-TOC159 complex indicating the absence of contaminations. In the negative control, immunoprecipitated NTAP protein did not co-isolate with any of the TOC-TIC proteins (Figure 2, left side) and confirms the specificity of the TAP-TOC159 purification. 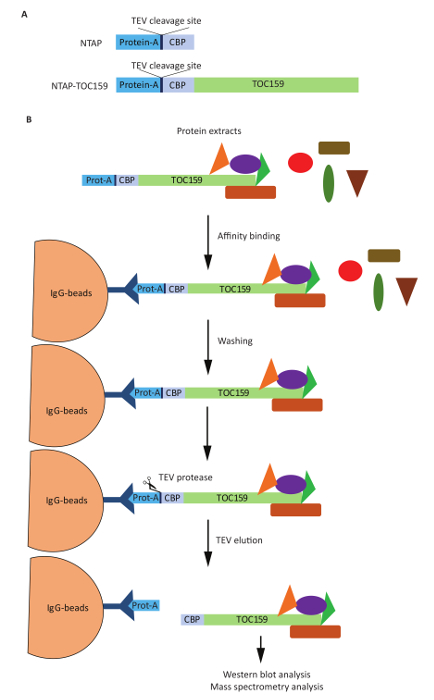 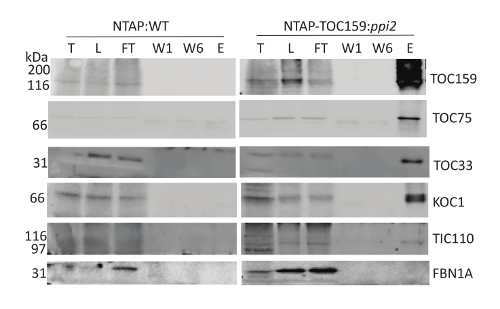 We demonstrated that a single step TAP tag purification is a specific and efficient method for the purification of the Arabidopsis TOC-TIC complex. Although the TAP-tag would allow two successive purification steps (IgG- followed by calmodulin affinity purification after TEV protease-cleavage), we believe that in many cases the first affinity step followed by TEV protease cleavage will be sufficient. Our target, TOC159, is low abundant and the inclusion of the second calmodulin-affinity step excessively diminished the protein yield which was the main reason for excluding it from our present protocol. The TEV-elution in itself is a highly specific and gentle purification step that will only release the TAP-tagged target together with associated interaction partners while contaminating the proteins sticking non-specifically to the IgG resin will remain there. Thus, in combination with the IgG-affinity step, the TEV elution results in a sufficiently efficient purification for our and probably many others' purposes.

Care must be taken that the TAP-tagged construct is fully functional in vivo. TAP-tagging could have potentially deleterious effects on protein activity, stability or localization. TOC159 consists of three domains, the N-terminal acidic domain, the central GTP-binding domain and C-terminal membrane domain, that anchors TOC159 in the outer chloroplast membrane2. To avoid potential interference with membrane insertion, we fused the TAP-tag to the N-terminus of TOC159. Fusion to the N-terminus is rather the exception than the rule. Many proteins contain N-terminal targeting information and should therefore by tagged at the C-terminus. We assured that TOC159 is functional in vivo by complementation of the ppi2 mutant (an albino mutant lacking TOC159) with TAP-TOC159. The rescue of the green, wild type phenotype indicated that TAP-TOC159 was functional15.

The purification protocol was used to identify new interaction partners of TOC159, that included KOC1 and TIC5610,11. In total, around 30 proteins were associated with the complex suggesting that new interaction partners will be isolated and characterized in the near future. While we highly recommend the TAP-tag for complex purification, we would still like to point out that additional versions to the one presented here exist and may be very useful for some applications.

The authors declare no competing interests. 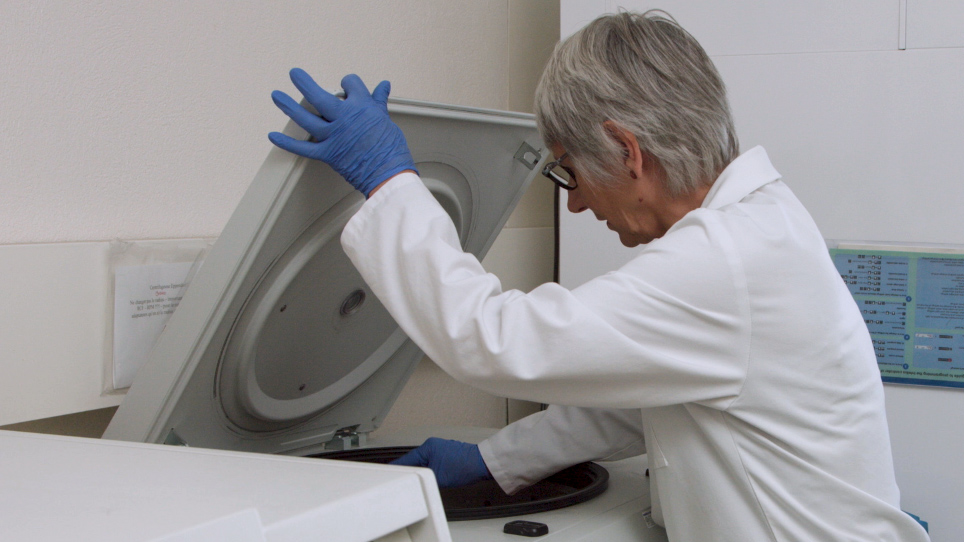