The goal of this protocol is to isolate epidermal keratinocytes from the dorsal skin of adult mice for a variety of downstream applications such as molecular biology, biochemistry, fluorescence activated cell sorting, and primary in vitro uses (e.g., clonogenic keratinocytes).

The protocol described here is a reliable method of harvesting primary keratinocytes from adult female mice (54 ± 2 days old) yielding approximately 30 x 106 viable cells per mouse. Primary adult mouse keratinocytes are harvested from the dorsal skin of female mice. Male mice (~6 weeks old) can be used for keratinocyte harvesting depending on the requirements of the experiment. Euthanized mice are shaved and sterilized with serial washes in povidone iodine and ethanol solutions (70% alcohol). After disinfecting the mice, the dorsal skin is removed and the subcutaneous fat and muscle are removed with a scalpel and discarded. The skins are cut into small pieces and treated with a mild, low temperature trypsinization to detach the lower dermis from the epidermis. The scraped epidermises are stirred at low speed, filtered to remove the hairs, counted, and re-suspended in culture medium. This method provides an excellent single cell suspension of highly culturable cells for many downstream applications.

Mammalian skin covers the entire body and serves a multitude of functions (e.g., a primary physical barrier, temperature regulation, and moisture retention). Over the last five decades, basic research on mouse skin has yielded new information on the structure and function of the skin. The mouse skin model has greatly helped understanding of the basic biology behind the complex molecular mechanisms of chemical or ultraviolet radiation-induced carcinogenesis. These mouse skin models provided a significant contribution towards understanding of human skin diseases and their mitigation. To explore further molecular dissection of the primary keratinocytes in hair follicle developmental biology, stem cell research, carcinogenesis, and genetic exploration of epidermis, it is frequently desirable to isolate and culture primary epithelial keratinocytes from mice skin to use in parallel with in vivo experiments. The motivating factor in developing this method was the need for an in vitro assay for clonogenic epidermal and hair follicle stem cells1,2. There was also an urgent need for single cell suspensions of epidermal cells suitable for clonogenic assays3, fluorescence activated cell sorting, and flow cytometry3,4. The advantages of this method are a robust harvest increase an order of magnitude over other methods5,6, inclusion of the epithelial portion of the hair follicles, and the high culturability of the harvested cells. In the 1980s, there were no known methods that could meet these requirements. In subsequent years, this method was refined to increase cell yield. The principal limitation of this method would be masking of some trypsin sensitive antibodies that would compromise immunoreactivity6.

The mice received husbandry according to the Specific Pathogen Free guidelines. One to five female mice 54 ± 2 days of age were obtained. In older mice, the viability of keratinocytes will be reduced due to anagen phase (growth) of the hair cycle. Also, the process of trypsinization is more difficult compared to young mice. The harvesting procedure has been successfully optimized for the thinner skin of female mice compared to male. Male mice are generally not used for keratinocyte harvests as they have a tendency to fight with one another during housing and therefore may leave scratches or wounds on the skin.

All vertebrate animal use protocols have been approved by the University of Minnesota Institutional Animal Care and Use Committee in accordance with recommended NIH and government guidelines.

2. Preparation of 3T3 Feeder Layer for X-ray Irradiation and Seeding

Typically, yields of epidermal keratinocytes per mouse ranging from 20 x 106 to 30 x 106 Trypan blue excluding cells are obtained8,9. The viability ranges from 80%-90%. Typical seeding efficiencies are around 30% attachment at 24 h. Colony formation on irradiated 3T3 feeder layers is around 60 colonies per 1,000 viable cells seeded for C57BL/6 mice, and approximately 30 colonies per 1,000 cells for Swiss-type mice10,11. Typical results from colony formation assays are illustrated in Figure 1. The number of hair follicle stem cells is approximately 9% CD34+/CD49f+ stem cells for C57BL/6 mice12. Typical results from flow cytometry are given in Figure 2.

Growth characteristics of four different media are illustrated in Figure 3. The media tested include KGM-gold, SFM, William's E medium, and Morris-2 (a reduced calcium medium developed in the Morris laboratory based on Williams E). 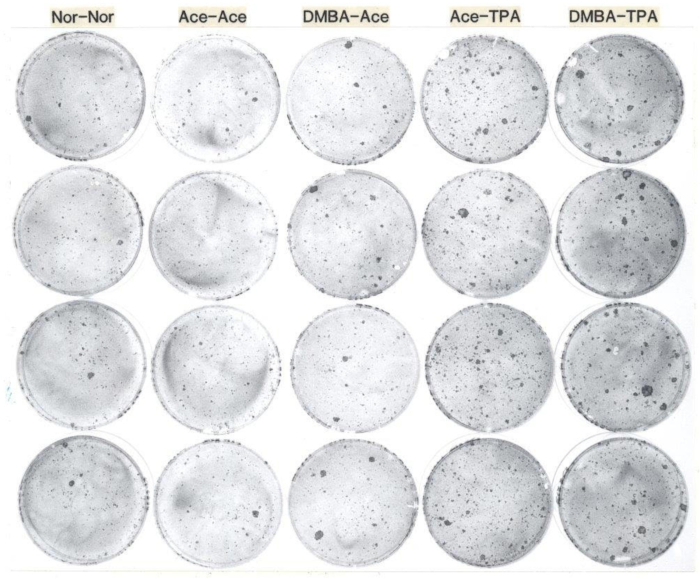 Figure 2: Representative example of flow cytometry of hair follicle stem cells from adult mice. Briefly, the isolated primary keratinocytes were isolated from dorsal mice skin and filtered for cellular debris using cell filter. The isolated keratinocyte suspension was labeled with CD49f or α6-integrin (PE) and CD34 (FITC) antibodies along with live dead dye and other controls. FITC and PE isotype control antibodies (Rat IgG2akappa) were used for compensation purpose (see Table of Materials). Stem cells were selected by means of CD49f (PE channel), which recognized the external component of the hemi-desmosomes found on basal epidermal and hair follicle cells, and CD34 (FITC channel), which recognized the hair follicle stem cells (i.e., CD34-FITC+ and a6-PE+ (upper right column, total 5%)). The right side column shows the different keratinocyte populations namely CD34-FITC only, CD34-FITC and a6-PE cells (double positive stem cell population), a6-PE only, and unstained cells. Note that there are two CD34+ stem cell populations as have been reported6,14. Please click here to view a larger version of this figure. 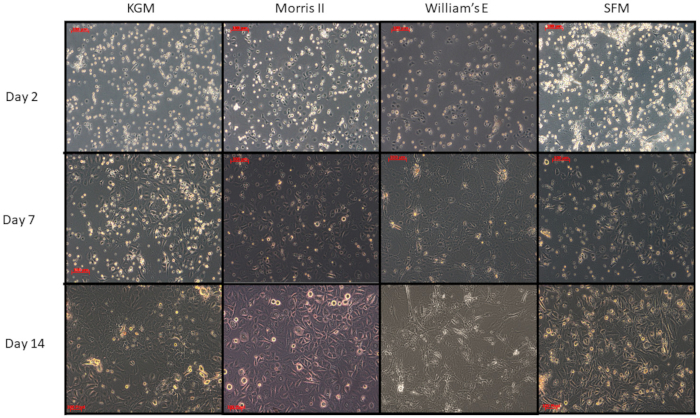 Figure 3: Comparison of four different media on primary cultures of epidermal cells from adult female mice. Primary keratinocytes were isolated from the dorsal mice skin and counted for seeding using four different media (KGM, SFM, Willem's-E and Morris-2). Equal numbers of keratinocytes were seeded and followed for their general morphology and growth pattern. Note that the proliferating keratinocytes have slightly different morphologies. KGM, SFM, and Morris-2 all of which are reduced calcium media have the most robust growth after fourteen days. In contrast, the cells do not persist when cultured in Williams E medium that has 1.4 mM calcium and a high ratio of potassium to sodium. Surprisingly, Williams E medium with supplements and twenty percent fetal bovine serum supports keratinocyte clonal cultures far better than any other medium tested, probably because the enriched Williams E medium helps the 3T3 feeder cells to "feed" better. Please click here to view a larger version of this figure.

There are several critical steps in the protocol. First, for rigor and reproducibility, female mice of age 54 ± 2 days were used. This has enabled us to perform sensitive and quantitative colony assays from multiple strains of mice and to use them as a phenotype in linkage analysis leading to identification of least one new stem cell regulatory gene10,11. Second, it is helpful to cut the skins into smaller pieces, as the trypsinization is more effective than trying to keep the skin whole. Third, the time and the temperature of the trypsin flotation is very important to the subsequent culturability. Moreover, one needs to "poke considerably" at the hairs remaining on the filter to dislodge the attached cells. This step is important to obtain high yields of cells. Furthermore, the 32 °C temperature of the incubator is important for the longer-term cultivation of keratinocytes from adult mice. Finally, in this protocol, the parallel readouts of in vitro and in vivo experiments1 are based on primary cultures rather than subcultures or cell lines. Notably, if harvesting primary keratinocytes for the first time using this protocol, keep the remaining dermis after scraping to confirm the full removal of hair follicles along with epidermis by histopathological observation.

The principal strength of this protocol for harvesting adult mouse keratinocytes is that it produces high yields of culturable cells that are suitable for many downstream applications. The chief limitation is that some cell surface epitopes may be sensitive to trypsinization such that immunostaining may be compromised. Therefore, when testing a new cell surface antibody, it may be prudent to use a dispase6 or thermolysin5 based method for harvesting for comparison. The significance of this protocol is that it has been rigorously tested, quantified, and applied to such diverse applications as assays for clonogenic stem cells1,9,10,11, for mass cultures in biochemistry8, for FACS sorting in stem cell analysis3,4, for molecular biology3,12, and for ongoing RNA and DNA sequencing. 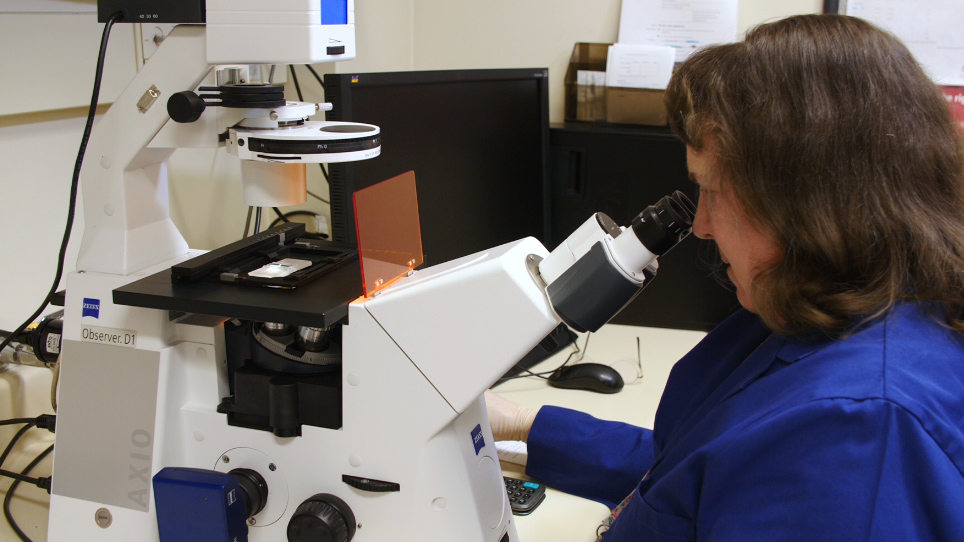