This protocol shows how uniformly 13C, 15N-labeled fungal materials can be produced and how these soft materials should be proceeded for solid-state NMR and sensitivity-enhanced DNP experiments. The sample processing procedure of plant biomass is also detailed. This method allows the measurement of a series of 1D and 2D 13C-13C/15N correlations spectra, which enables high-resolution structural elucidation of complex biomaterials in their native state, with minimal perturbation. The isotope-labeling can be examined by quantifying the intensity in 1D spectra and the polarization transfer efficiency in 2D correlation spectra. The success of dynamic nuclear polarization (DNP) sample preparation can be evaluated by the sensitivity enhancement factor. Further experiments examining the structural aspects of the polysaccharides and proteins will lead to a model of the three-dimensional architecture. These methods can be modified and adapted to investigate a wide range of carbohydrate-rich materials, including the natural cell walls of plants, fungi, algae and bacteria, as well as synthesized or designed carbohydrate polymers and their complex with other molecules.

Carbohydrates play a central role in various biological processes such as energy storage, structural building, and cellular recognition and adhesion. They are enriched in the cell wall, which is a fundamental component in plants, fungi, algae and bacteria1,2,3. The cell wall serves as a central source for the production of biofuel and biomaterials, as well as a promising target for antimicrobial therapies4,5,6,7,8,9.

The contemporary understanding of these complex materials has been substantially advanced by decades of efforts that were devoted to the structural characterization using four major biochemical or genetic methods. The first major method relies on sequential treatments using harsh chemicals or enzymes to break down the cell walls into different portions, which is followed by compositional and linkage analysis of sugars in each fraction10. This method sheds light on the domain distribution of polymers, but the interpretation may be misleading due to the chemical and physical properties of biomolecules. For example, it is difficult to determine whether the alkali-extractable fraction originates from a single domain of less structured molecules or from spatially separated molecules with comparable solubility. Second, the extracted portions or whole cell walls can also be measured using solution NMR to determine the covalent linkages, also termed as crosslinking, between different molecules11,12,13,14,15. In this way, the detailed structure of covalent anchors could be probed, but limitations may exist due to the low solubility of polysaccharides, the relatively small number of crosslinking sites, and the ignorance of non-covalent effects that stabilizes polysaccharide packing, including the hydrogen-bonding, van der Waals force, electrostatic interaction and polymer entanglement. Third, the binding affinity has been determined in vitro using isolated polysaccharides16,17,18,19, but the purification procedures may substantially alter the structure and properties of these biomolecules. This method also fails to replicate the sophisticated deposition and assembly of macromolecules after biosynthesis. Finally, the phenotype, cell morphology and mechanical properties of genetic mutants with attenuated production of certain cell wall component shed lights on the structural functions of polysaccharides, but more molecular evidence is needed to bridge these macroscopic observations with the engineered function of protein machineries20.

Recent advances in the development and application of multidimensional solid-state NMR spectroscopy have introduced a unique opportunity for solving these structural puzzles. 2D/3D solid-state NMR experiments enable high-resolution investigation of the composition and architecture of carbohydrate-rich materials in the native state without major perturbation. Structural studies have been successfully conducted on both primary and secondary cell walls of plants, the catalytically treated biomass, bacterial biofilm, the pigment ghosts in fungi and, recently by the authors, the intact cell walls in a pathogenic fungus Aspergillus fumigatus21,22,23,24,25,26,27,28,29,30,31. The development of dynamic nuclear polarization (DNP)32,33,34,35,36,37,38,39,40,41,42 substantially facilitates NMR structural elucidation as the sensitivity enhancement by DNP markedly shortens the experimental time on these complex biomaterials. The protocol described here details the procedures for isotope-labeling the fungus A. fumigatus and preparing fungal and plant samples for solid-state NMR and DNP characterization. Similar labeling procedures should be applicable to other fungi with altered medium, and the sample preparation procedures should be generally applicable to other carbohydrate-rich biomaterials.

2. Preparation of A. fumigatus for Solid-state NMR and DNP Studies

3. Preparation of Plant Biomass for NMR and DNP Studies

NOTE: A brief overview of the NMR experiments is provided in this section. However, structural elucidation typically requires extensive expertise. Therefore, collaborative efforts with NMR spectroscopists is recommended.

The isotope labeling substantially enhances the NMR sensitivity and makes it possible for measuring a series of 2D 13C-13C and 13C-15N correlation spectra to analyze the composition, hydration, mobility and packing of polymers, which will be integrated to construct a three-dimensional model of cell wall architecture (Figure 1). If the uniform labeling succeeds, a complete set of 1D 13C and 15N spectra can be collected within 1 h and each standard 2D spectrum should take no longer than 24 h of measurement.

Well-prepared samples usually expect both high NMR intensities and sharp lines. Compromising of either parameter indicates un-optimized sample preparation. The fungal samples should be prepared in a never-dried manner, and partial dehydration during the packing steps could lead to a notable broadening of the linewidth. If the experimental time is substantially longer than expected for a fully packed NMR sample, the labeling level might be low. If off-diagonal signals are difficult to obtain in the 2D 13C-13C correlation spectrum, statistical labeling might have occurred (Figure 1b). The two 13C peaks at 96 and 92 ppm are signature carbon 1 signals of glucose54, therefore, their strong intensities in the quantitative 13C direct polarization (DP) spectra measured with long recycle delays of 35 s typically indicate the dominance of small molecules due to incomplete dialysis or washing (Figure 1a). With well-labeled samples, long-range correlations can be further measured to detect the spatial proximities of biomolecules (Figure 1c) and construct the structural model of intact cell walls (Figure 1d).

Table 1. The composition of the minimal medium.

Table 2. The composition of the trace-element solution (concentrated). Note that for preparing unlabeled fungi, unlabeled glucose and unlabeled sodium nitrate can be used.

Compared with the biochemical methods, solid-state NMR has advantages as a non-destructive and high-resolution technique. NMR is also quantitative in compositional analysis, and unlike most other analytical methods, does not have the uncertainties introduced by the limited solubility of biopolymers. Establishment of the current protocol facilitates future studies on carbohydrate-rich biomaterials and functionalized polymers. However, it should be noted that the resonance assignment and data analysis can be time-consuming and usually require systematic training. The authors are currently developing tools and databases to help scientists without prior experience to overcome this barrier.

Since the natural isotope abundance of 13C is only 1.1%, the probability for observing a 13C-13C cross peak using unlabeled materials is only 0.012% (1.1% x 1.1%) of that using uniformly labeled samples. Therefore, the isotope enrichment achieved using this protocol substantially enhances the NMR sensitivity by four orders of magnitude and enables 2D correlation experiments for structural determination.

The optimized, well-hydrated samples should exhibit sharp lines in 2D 13C-13C correlation spectra. The mobile components, such as the β-glucans in A. fumigatus and the pectins in plants should exhibit a full-width at half-maximum (FWHM) linewidth of 0.3-0.5 ppm on 600-800 MHz NMR spectrometers29,31. The rigid components have slightly broader peaks due to conformational heterogeneity of the constituting, repetitive sugar units and the lack of rapid molecular motions. The typical 13C linewidth is 0.7-1.0 ppm for cellulose microfibrils in plants and 0.5-0.7 ppm for chitin in fungi55. The sharp linewidth of cellulose and chitin are mainly caused by polymer crystallinity, thus is partially resistant to dehydration and temperature change, for example, the cryogenic temperature of DNP experiment56,57. The peak sharpness of matrix polymers, however, are highly sensitive to the change of sample conditions that affect the polymer mobility, therefore, it can be used as an indicator of sample hydration. Broad lines of matrix polymers typically designate the lack of hydration in the sample, which may be fully or partially recovered by re-adding water58. Typically, a hydration level of 50-80 wt% is enough for providing a good linewidth in both plant and fungal samples.

DNP is often necessary for investigating these challenging whole-cell systems. Typically, a 20-40 fold enhancement of sensitivity could be achieved on an optimized sample on a 600 MHz/395 GHz DNP spectrometer and this value increases with decreasing field, for example, almost doubled on a 400 MHz/263 GHz DNP26,59. There are several factors that could affect the DNP efficiency. First, the penetration of radicals into the porous network of cell walls is crucial and this process can be substantially facilitated by mild grinding of the biomaterials in the radical-containing DNP matrix. Second, the physical properties, the stiffness for example, of the sample affects the choice of microwave power, the DNP matrix "melts" under 12 W irradiation as evidenced by the sharpening of 1H resonances, which was not a problem for the stiffer plant stems60. As a result, a more isotropic pattern of the 1H solvent peak is observed, with substantially lower spinning sidebands and attenuated DNP enhancement. Therefore, weaker power is recommended for softer materials.Third, the composition of DNP matrix should be optimized. It turns out that d8-glycerol/D2O/H2O is generally the best solvents for soft materials while a simpler and cheaper choice of D2O/H2O can also be effective in some cases because the sugars present in the system serves as cryoprotectants to some extent. In contrast, the d6-DMSO/D2O/H2O solution fails in both plants and fungal samples, with less than 10-fold of sensitivity enhancement, thus it is not recommended for use unless for special purposes. A matrix-free protocol has recently been demonstrated to be highly effective due to solvent depletion, which creates additional space to accommodate more materials34,56,61. However, the loss of hydration presents a major perturbation to the structure of biomolecules, thus this method might not be suitable for biological systems. If unlabeled cell walls are to be studied, 13C-depleted d8-glycerol/D2O/H2O is the optimal solvent that does not contribute any natural abundance 13C signals nor sacrifices any sensitivity enhancement. 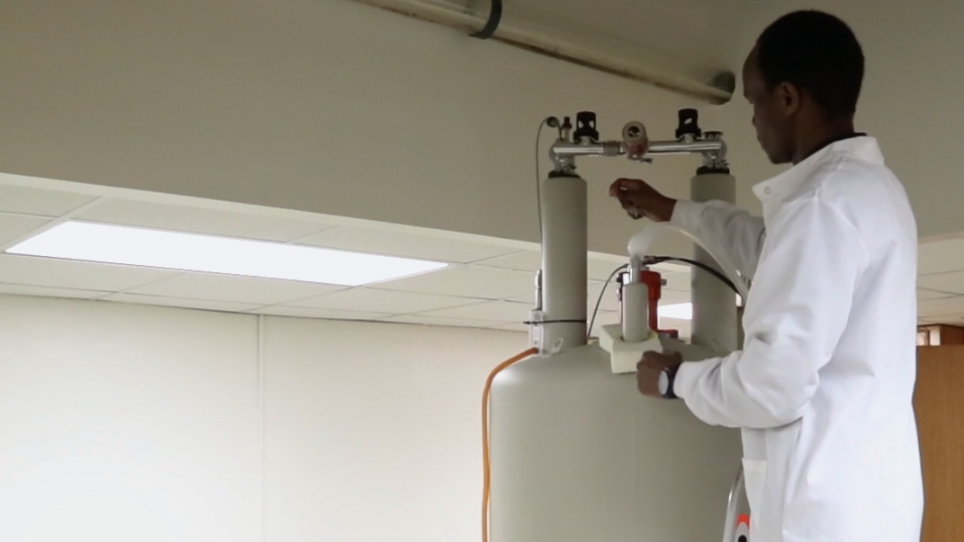