A fundamental aspect of assessing the welfare of animals in captivity is to ask whether the animals have what they want. Here, we present a protocol to determine housing preference in the zebrafish (Danio rerio) with respect to the presence/absence of environmental enrichment and access to flowing of water.

Animal welfare assessment techniques try to take into consideration the specific needs and wants of the animal in question. Providing enrichment (the addition of physical objects or conspecifics in the housing environment) is often a way to give captive animals the opportunity to choose who or what they interact with and how they spend their time. A fundamental component of the aquatic environment that is often overlooked in captivity, however, is the ability for the animal to choose to engage in physical exercise. For many animals, including fish, exercise is an important aspect of their life history, and is known to have many health benefits, including positive changes in the brain and behavior. Here we present a method for assessing habitat preferences in captive animals. The protocol could easily be adapted to look at a variety of environmental factors (e.g., gravel versus sand as a substrate, plastic plants versus live plants, low flow versus high flow of water) in different aquatic species, or for use with terrestrial species. Statistical assessment of preference is carried out using Jacob's preference index, which ranks the habitats from -1 (avoidance) to +1 (most preferred). With this information, it can be determined what the animal wants from a welfare perspective, including their preferred location.

The regulations governing how laboratory animals should be housed in captivity are explicit and well-defined. The Association for Assessment and Accreditation of Laboratory Animal Care (AAALAC) International oversees and manages all organizations and institutions that work with research animals and has specific guidelines for species-appropriate husbandry and housing. For example, The AAALAC's Guidance on the Housing and Care of Zebrafish, Danio Rerio1 "strongly encourages" the use of enrichment (the addition of physical objects or conspecifics in the housing environment) when housing zebrafish in captivity. The guide goes on to state, "Providing artificial plants or structures that imitate the zebrafish habitat allow animals a choice within their environment."

Evidence suggests that enrichment can stimulate the growth of new neurons (neurogenesis) in areas of the brain involved in processing spatial information2, and it is thought that these neural changes are associated with enhanced learning ability3. The effects of enrichment on neurogenesis and learning have been widely studied across various taxa, including fish4,5, birds6, reptiles7, and mammals8. Although these types of studies are important to understand the effects of enrichment on the brain and behavior, they do not take into consideration the particular choices or preferences of animals for a particular environment over another.

A fundamental question to ask when assessing the welfare of captive animals is whether or not the animals have what they want9. A way to investigate this question that provides tangible evidence is to provide animals with choices that allow us to understand their subjective preferences. For example, two studies have investigated whether zebrafish prefer access to either an enriched or a plain environment, with both studies indicating a preference for areas that contain enrichment10,11. However, it has also been suggested that zebrafish appear indifferent to environmental enrichment12, so the answer to the question is obviously not clear-cut. Another application of preference testing associated with animal welfare extends to trying to understand how different aspects of an enriched environment play a part in the choices an individual animal makes. In fish alone, different types of enrichment have differential effects on the brain and behavior, and this relationship is further complicated by individual differences in personality traits13. Moreover, preference testing could be useful for comparative studies of environmental enrichment. Even across different fish species, enrichment has been shown to have an effect on many different types of behavior, including aggression14, boldness15, locomotion16, and risk-taking behavior17.

Jacob's preference index is a statistical test that is used frequently to quantify housing preferences18. Jacob's preference index assigns a value to each different habitat based on the number of animals present in each habitat type at different time points, where preference ranges from -1 (avoidance) to +1 (most preferred). Here we describe a method for using Jacob's preference index to investigate housing preferences in fish and use the example of assessing two important characteristics of the aquatic environment: 1) the presence or absence of enrichment; and 2) the flow of water19. However, the protocol could easily be adapted to look at a variety of environmental factors (e.g., gravel versus sand as a substrate, plastic plants versus live plants, low versus high water flow) across different species and landscapes (e.g., aquatic and terrestrial).

The current study has approval and complies with all requirements of the animal care and use protocols of the Pennsylvania State University; IACUC no. 46466.

We used the preference test to investigate housing preferences in zebrafish given a choice between varying enrichment including 1) plastic plants and sandy substrate; and 2) water flow. These were divided into four zones: (i) Enriched Only; (ii) Flow Only; (iii) Enriched and Flow; (iv) Plain; and a Central arena where food was delivered19. Zebrafish showed the highest preference for the Enriched and Flow zone, which was significantly different than all other zones (Enriched Only, Flow Only, Plain, and Central Arena; p < 0.01). Fish avoided both the Flow Only and Plain zones, spending more time in the Central Arena19 (Figure 2A). In addition, zebrafish moved between different habitat zones more often at the start of the observation period than at the end (Figure 2B). 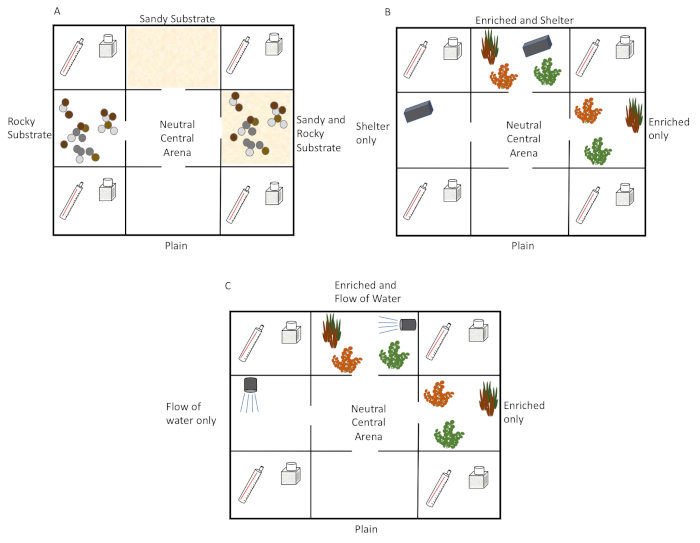 Here we present an experimental design that allows us to investigate the preferences of fish for different types of habitats. Some critical steps that are important in preference testing include: 1) ensuring that uniform conditions are maintained across different replicates (e.g., external noises or movement, experimenter, water chemistry, light levels); 2) ensuring that the zones are rotated between replicates and a significant amount of water is replaced with fresh sump water between tests to reduce biases; (3) ensuring that an appropriate sample size is used to detect significant results, both in terms of number of individuals in each group and number of replicate tanks; and 4) if trials are recorded, optimizing and ensuring proper video recording and file transfer.

Modifications to the current protocol include exposing fish to a variety of other habitat types, such as different enrichment items, different substrates, or even different flow rates. In addition, it may be possible to use animal tracking software to further understand how the fish are using the space in each zone (e.g., do the fish spend time swimming against the flow of water in the flow zones, or do they avoid that part of the habitat altogether). However, the walls of the experimental tank may need to be modified to accommodate this type of tracking software. Finally, the preference test described here could be adapted to any fish species, or potentially any aquatic organism that the experimenter wants to investigate.

A limitation of the current protocol is that preference testing is limited by the resources that are presented to the animals. Therefore, the animal may not be choosing a preferred choice, but the least unpleasant of those presented20. However, it may be that having a choice in the first place is better for welfare than only being given limited options (i.e., access to the most preferred habitat only). Also, it has been suggested that zebrafish find light backgrounds aversive23, thus an alternative tank color (e.g., black) may be more suitable. Moreover, preference testing is often limited to observations made in a small window of time, where the animal in question may be acting on immediate cues rather than future needs21,22. In addition, gender, group size, and social context are factors that affect group dynamics and therefore potentially habitat preferences in fish, so it is important to try to keep these factors consistent across replicates.

With our representative results we showed that zebrafish preferentially choose both Enriched and Flow and Enriched Only zones and avoid Flow Only and Plain Zones. In sum, the Enriched and Flow zone was preferred over all other zones. A preference for enriched environments, and in particular the Enriched and Flow Zone, may be the result of an increased need for sensory stimulation (exploration) or it could be the need to find places to hide (reduced competition from conspecifics). Interestingly, there was a slight preference for the Central Arena over the Flow Only and Plain zones, suggesting that the potential of food being delivered was a higher motivational factor than swimming. In terms of movement between the zones, there was more switching between zones in the beginning of the observation period than at the end. The increase in movement at the beginning of the observation period may correspond to the timing of feeding (fish were fed half an hour before recording started), thus they may have been more motivated to move and look for additional food. In summary, the protocol described in the current study is an effective tool for looking at habitat preferences in fish. 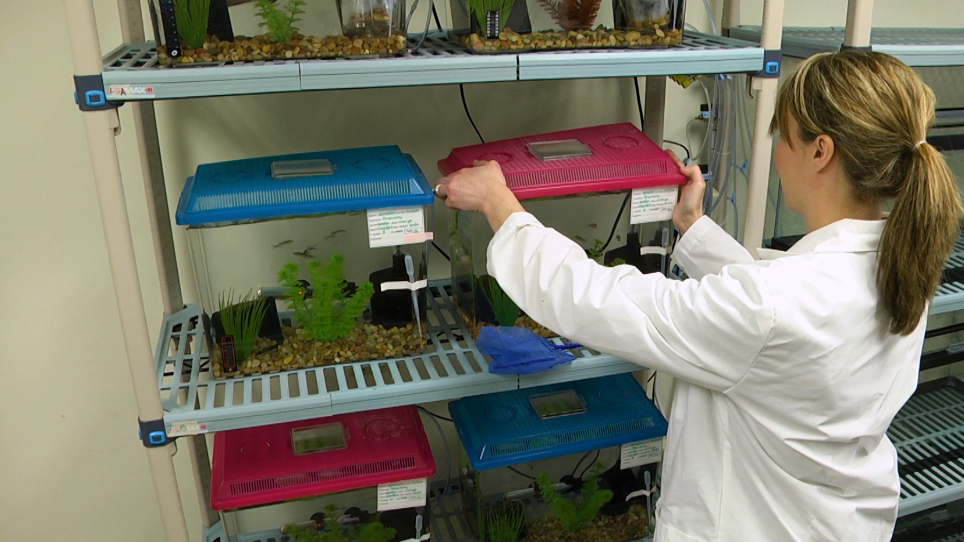