Many chronic diseases are associated with the hallmarks of aging, including defective autophagy1. Osteoarthritis (OA) is the most prevalent joint disease and has a major impact in restricting everyday activities in the aging population, but neither preventive measures nor disease-modifying treatments are yet available2.

Joint aging and OA are associated with hallmarks that define the progression of cartilage degeneration, including defective autophagy and senescence3,4. Targeting autophagy in musculoskeletal tissues can help find therapeutic innovations for rheumatologic diseases5,6. Pharmacological modulation of autophagy is a promising, relevant mechanism for intervention in preclinical disease models7. In OA, autophagy activation has been used to prevent joint dysfunction8. Methods to monitor autophagy based on robust, reproducible protocols that allow quantitative analysis can be used to identify novel agents and facilitate the pharmacological targeting of disease-relevant hallmarks of aging.

Adapting this flow cytometry reported method to a stable expression imaging monitoring system in live chondrocytes may allow the identification of molecules activating autophagic flux in the context of cartilage biology.

NOTE: The generation of an autophagy reporter cell line by stable transfection of pBABE-mCherry-GFP-LC3 by establishing a flow cytometry quantitative readout was described previously11. Two cell lines were used in the retroviral transfection: HEK 293-T17 during the cotransfection process and T/C28a2 in the infection step.

NOTE: After selecting a clone, start the assay to quantify autophagic flux.

Autophagic flux can be monitorized in cells by pharmacological modulation or by cell stress response. Inmortalized Human Chondrocytes (T/C28a2) were employed to develop an autophagy reporter cell line using LC3 as a fluorescent reporter (mCherry-EGFP-LC3B) for autophagy. Figure 1 shows the schematic workflow of the screening assay starting with the development of the autophagy reporter cell line in human chondrocytes (mCherry-EGFP-LC3-T/C28a2), to the induction or inhibition of autophagic flux by pharmacological modulation, and then the data analysis performed with a High Content Imaging Microscope. Figure 2 shows the schematic representation of the cell-based imaging assay to identify autophagy modulators by monitoring autophagic flux. This basis of the system lies in the higher sensitivity of EGFP fluorescence to the acidic environment of the autolysosome relative to mCherry. Figure 3 shows the sequence of analysis to quantify autophagic flux from cell-based images. Figure 4 shows representative images of low and high autophagic flux represented by the ratio of mCherry/GFP of chloroquine and rapamycin, respectively. 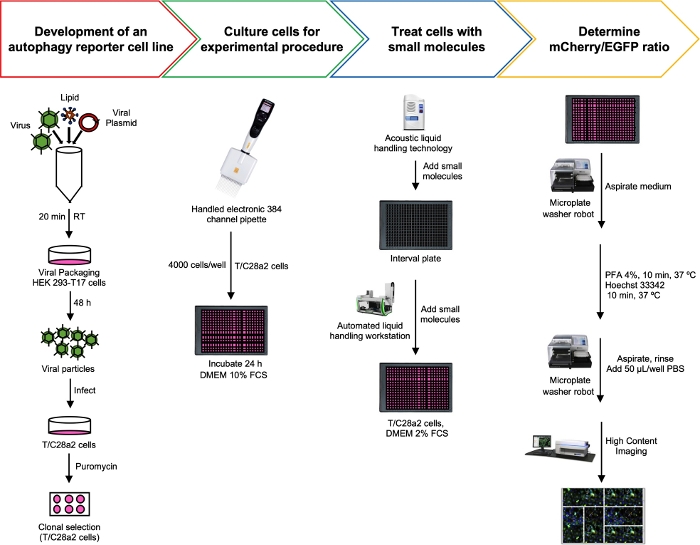 Figure 1: Schematic overview of the workflow used to determine autophagic flux by cell-based imaging assay. To create an autophagy reporter cell line, two cell lines were used in the retroviral transfection, the HEK 293-T17 cell line during the cotransfection process and the T/C28a2 immortalized human chondrocytes in the infection step. The pBABE-puro-mCherry-EGFP-LC3B plasmid was introduced into the cells as described previously10 and puromycin was used to select a stable cell culture after viral transfection. Cells were seeded into 384 well plates (4 x 103 cells per well) in growth medium and incubated at 37 °C and 5% CO2 for 24 h prior to treatment. Then, medium was removed and growth medium supplemented with 2% FCS and 1% P/S, and 2.5 μL/mL puromycin. Cells were treated with 30 μM chloroquine and 10 μM rapamycin. A high content screening system was used for data acquisition. Several channels and exposure times were selected to develop a reading protocol. Data were analysed using image analysis software and an analysis protocol was selected. Finally, the mCherry/EGFP ratio of relative intesity spots was confirmed. Please click here to view a larger version of this figure. 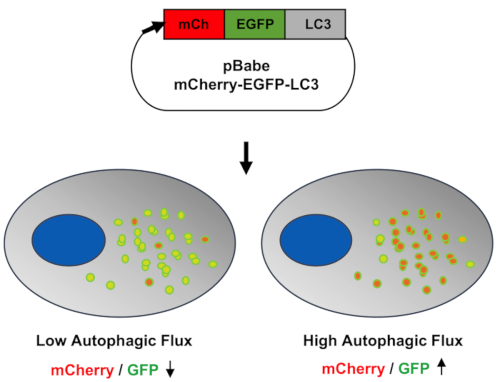 Figure 2: Representation of cell-based imaging assay to identify autophagy modulators. The pBABE-puro-mCherry-EGFP-LC3B plasmid was introduced into the cells. When autophagy was activated, the cargo was engulfed by the phagophores and autophagosomes were created. LC3 was lipidated and incorporated into autophagosomal membranes where LC3 could interact with cargo receptors. Due to the basic environment in the autophagosomes and EGFP pKa ≥ 6.0, green fluorescence was emited. When autophagy flux continued, autophagosomes fused with lysosomes, autolysosomes were created, the pH decreased, and red-orange fluorescence was emited. Please click here to view a larger version of this figure.

Figure 3: Sequence of analysis to quantify autophagic flux from cellular images using different building blocks to create a protocol. Nuclei were identified using the Hoechst channel. Then, the cytoplasm was identified using two channels, fluorescein (EGFP) and RFP. Next, border objects were removed to select the cell population. The software identifies whole cells in green and incomplete cells in red. In each cytoplasm identified, accumulation of speckels (called spots) was seen. Finally, relative intensity spots from each cytoplasm were calculated and autophagy flux was quantified based on the ratio of mCherry/EGFP associated to LC3 activation. Scale bar = 50 μm. Please click here to view a larger version of this figure. 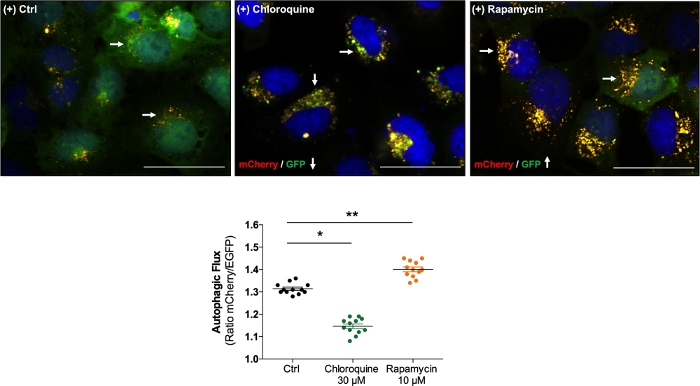 Defective autophagy is an important hallmark of aging-related joint degeneration, but neither preventive nor disease-modifying treatments targeting autophagy are yet available for cartilage degeneration2. Given its relevance and clinical implications, autophagy has become a target of interest for drug discovery and development, although methods to directly monitor changes in this key homeostasis mechanism has proved challenging.

Here, a cell-based phenotypic assay to determine the autophagic flux in live human chondrocytes is described. A plasmid containing a dual reporter of autophagy activation, mCherry-EGFP-LC3, is used to simultaneously monitor autolysosome formation and degradation events due to differences in the pH sensitivity of GFP and mCherry signals in live cells by flow cytometry11. Human chondrocytes with stable, high expression of mCherry-EGFP-LC3B can be used to accurately monitor the dynamics of autophagosome flux. A cell-based imaging assay using chondrocytes can be used to identify autophagy modulators, because the dynamic pH changes due to autolysosome formation can be observed in real-time. When autophagy is activated, phagophore and autophagosomes are created and catch disposable cargo. LC3 lipidation, inclusion into autophagosomal membranes, and interaction with cargo receptors provide a basic environment of pKa ≥ 6.0, corresponding to green fluorescence emission. If autophagy flux is sustained, autophagosomes fuse with lysosomes to generate autolysosomes, decreasing pH and emitting red-orange fluorescence.

Critical steps for setting up the protocol, include getting high transfection efficiency by using high-quality cell cultures and DNA to generate viral particles, the eficient selection of the cell clones carrying high levels of the transgene by optimal antibiotic treatment and flow cytrometry sorting, the gentle manipulation of cell monolayers to make sure that high-quality images allow quantitative analysis of autophagy flux, as well as the accurate identification of a meaningful number of relevant signals coming from the autophagy flux events.

Current methods rely heavily on flow cytometry, which requires cells to be in suspension, making information on cell–cell communication and intracellular events difficult to obtain. Although accurate and suitable to purify small or complex subpopulations, sorting can be too slow and provide the data only in terms of the average of surface receptor densities. Therefore, cell-based imaging presents an advantage in monitoring and measuring autophagy by detection of markers by static analyses, which cannot distinguish between upregulation and degradation inhibition, for example12. Also, high sensitivity for image acquisition and automated methods allowing the capture and the analysis of the images are only possible by using High Content Screening Systems. Automatic quantitative analyses show consistent low autophagy signals (green) obtained by exposing chondrocytes to chloroquine, while high autophagy activation signals are obtained by exposing chondrocytes to rapamycin (red-orange). These opposite effects allow the systematic identification of agents (e.g., libraries of small molecules, genomic loss-of-function or gain-of-function screening libraries) that modulate autophagy in large scale experiments. Indeed, by using this cell-based assay in a drug repurposing approach, the PPARα fibrate used as a lipid lowering drug was identified as a candidate disease-modifying therapeutic for osteoarthritis13.

This method adapts flow cytometry to a stable expression imaging monitoring system in live chondrocytes. This protocol may allow the identification of molecules activating autophagy flux in the context of cartilage biology, as well as a method to screen agents affecting these mechanisms.