Here, a protocol is presented for optically extracting and cataloging innate cellular fluorescence signatures (i.e., cellular autofluorescence) from every individual live cell distributed in a three-dimensional space. This method is suitable for studying the innate fluorescence signature of diverse biological systems at a single-cell resolution, including cells from bacteria, fungi, yeasts, plants, and animals.

Diverse biomolecules within a cell1 emit autofluorescence signals, and the innate fluorescence signature of a cell consists of the assembly of these signals. This signature fluorescence reflects various cellular properties and also differences in physiological status. Analysis of innate fluorescence is minimally invasive and can complement traditional, more invasive microbiological probes that leave a range of traces from mild metabolic modification to complete cell destruction. While traditional techniques such as DNA or cell content extraction2,3, fluorescent in situ hybridization4, and the introduction of fluorescent reporter genes to the genome are effective in determining cell type or physiological status, they commonly require either manipulation of the cells or invasive tagging.

1. Preparation of the sample

2. Setup of a microscope

Figure 3A shows the result of accurate 3D cell segmentation superimposed over the original CRM image of a population of budding yeast Saccharomyces cerevisiae YM427114. Figure 3B shows the resulting innate fluorescence signatures for the population.

Figure 1: Accuracy of segmentation and apparent intraspecies variability. (A) Typical single-cell innate fluorescence signature of a bacterial cell (P. putida KT2440), presented as a spectrum plot (top) and a heat map (middle). The emission wavelength is indicated as a rainbow color map (bottom). The Y axis of the spectrum plot and the color of the heat map both indicate the relative fluorescence intensities. The numbers in the bottom indicate the excitation wavelength. Visual representation of accurate (B) and inaccurate (C) cell region recognition by the image analysis algorithm. Light blue shading indicates cell regions detected for a population of soil bacterium P. putida KT 2440. Blobs with red numbering in panel C are examples of false detection, where the algorithm classified non-cell regions (i.e., background noise) as cell regions due to inappropriate binarization threshold settings. Scale bars = 1 µm throughout. Panels D and E depict the innate fluorescence signatures for the same population, generated with accurate and inaccurate cell segmentation, respectively. Each column shows a reconstructed single-cell hyperspectrum presented as a 1 x 192 matrix, where the yellow-to-blue color map indicates relative fluorescence intensity. (F) The variance of innate fluorescence signatures in accurate (light blue) and inaccurate (red) segmentations visualized using PCA. Each axis label denotes the component number and its cumulative percentage contribution to the PCA analysis. Please click here to view a larger version of this figure.

Figure 3: Example of 3D segmentation and innate fluorescence signature extraction. (A) 3D projection of regions recognized as cell populations of budding yeast S. cerevisiae YM4271. The inset numbers are the identification numbers. (B) Heat map of innate fluorescence signatures extracted from the 3D regions. The X-axis number corresponds to the identification number. Please click here to view a larger version of this figure.

There are two critical points in this method that need to be closely followed to obtain reproducible results: 1) keep the laser power output under the microscope objective consistent through excitation wavelengths and experiments, and 2) perform accurate cell segmentation.

The first point is particularly important when comparing the innate fluorescence signature among different experiments. Avoid simply applying the same “percent output” settings to the excitation wavelengths (i.e., using 5% power output for all of 405, 488, 514, and 530 nm laser lines), because the maximum power output can differ up to an order of magnitude among laser lines. In addition, the objective and the internal optics usually have uneven optical absorption characteristics, which also need to be accounted for. For these reasons, actually measuring the output under the objective using a laser power meter (Table of Materials) is recommended. Taking this measurement every few experiments, or periodically, is also recommended, because the output from laser lines can significantly decay over a few years.

The second point, accurate cell segmentation, becomes particularly important in situations where intra- or interspecies variability is a concern. Inaccurate cell segmentation (Figure 1D) results in outlier data points (Figure 1E, indicated by red triangles) and greater apparent intraspecies variability. The segmentation parameters should be determined carefully, checking the cell segmentation accuracy by overlaying the segmentation results onto the original CRM image, before proceeding to any further analysis or training machine learning models. If working with a poor-quality image, additional image processing could be required to achieve accurate segmentation. Using either a ‘Gaussian filter’ or ‘median filter’ can remove grainy artifacts, and bilateral filter processing counters any striped background.

With poor quality optics (e.g., a non-confocal grade objective) or insufficient detector sensitivity, dealing with the detection of faint innate fluorescence signatures might be challenging. Note that using the setup described here and previously11, we did not encounter any type of cell sample whose innate fluorescence was too faint to reconstruct an innate fluorescence signature. Although higher emission output for excitation and longer pixel dwell time can be used to obtain stronger emission signals, this may cause damage to the cell samples. A potential solution for cases where faint innate fluorescence is an issue is to reduce the background signal intensity, for example by suspending cells in buffer or synthetic media instead of broth. Types of cell containers, such as glass bottom dishes and microfluidic devices, are compatible and appropriate for this technique, although an agarose slab was used to retain cells in position here and in a previous study15.

The confocal microscope method offers spatial resolution and in situ analysis for adherent cell populations, biofilms, and tissue samples. A potential trade-off of this methodology is the maximum throughput compared to a flow cytometer, for example. A complete set of confocal scans collecting a few hundred to a thousand innate fluorescence signatures with a single set of scans can take up to a few minutes. A flow cytometer is less sensitive due to its optical design but can potentially achieve a throughput several orders of magnitude greater.

To rigorously identify a compound that is responsible for a specific peak in an innate fluorescent signature is typically challenging, due to its complicated nature. However, it has been suggested that a number of biologically relevant molecules, such as vitamins (e.g., flavin adenine dinucleotide [FAD]), coenzymes (e.g., nicotinamide adenine dinucleotide [NADH]), and lipofuscin pigments could be major fluorophores in cells1,16. For example, FAD has an excitation maximum between 350–450 nm and an emission peak at approximately 525 nm16. Free NADH has an excitation maximum and emission peak at 340 nm and 460 nm, respectively, although the emission spectra of protein-bound NADH differs16,17,18. Lipopigments that are known to associate with stressed or aged cells have a broad excitation range (350–500 nm) and emission range (450–600 nm)16,18.

The use of CRM offers an independent source of information to identify cell contours and therefore provides another significant advantage of CRIF: the selective extraction of fluorescence signals from individual cells distributed in a 3D space. This represents a step forward from the traditional analysis of the fluorescence characteristics of a whole microbial colony or a bulk culture suspension, which is an averaged mixture of signals from a vast number of cells contaminated with non-cell signals from medium components, secreted metabolites, and extracellular matrixes.  An analysis of single-cell innate fluorescence signatures allows predictive characterization of the physiological status of intact cells, providing a potential solution for resolving temporal development of a cell's distribution and physiological state.

This study was supported in part by a grant-in-aid for scientific research from the Ministry of Education, Culture, Sports, and Technology of Japan (18K04843) to Y. Yawata, the JST ERATO (JPMJER1502) to N. Nomura. 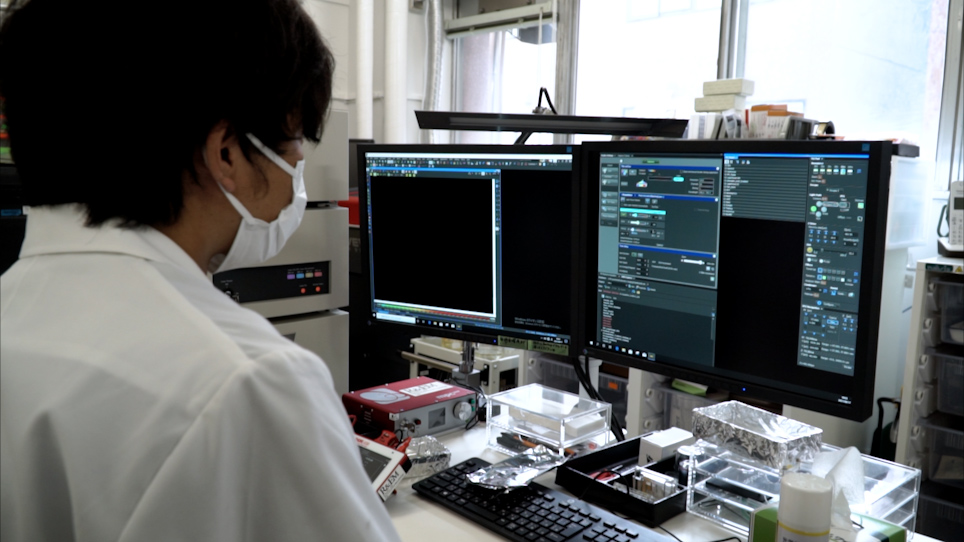