Human hematopoietic stem cells (HSCs), like other mammalian HSCs, maintain lifelong hematopoiesis in the bone marrow. HSCs remain quiescent in vivo, unlike more differentiated progenitors, and enter the cell cycle rapidly after chemotherapy or irradiation to treat bone marrow injury or in vitro culture. By mimicking the bone marrow microenvironment in the presence of abundant fatty acids, cholesterol, low concentration of cytokines, and hypoxia, human HSCs maintain quiescence in vitro. Here, a detailed protocol for maintaining functional HSCs in the quiescent state in vitro is described. This method will enable studies of the behavior of human HSCs under physiological conditions.

Hematopoietic stem cells (HSCs) and multipotent progenitor cells (MPPs) coordinately form a reservoir for continuous replenishment of differentiated cells to maintain hematopoiesis throughout life in humans1. Cell cycle quiescence is a prominent feature of HSCs, differentiating them from MPPs2. Conventionally, HSCs are thought to reside at the apex of the hierarchy of the hematopoietic system, producing all differentiated blood cells. This hierarchical model was mostly deduced from transplantation experiments3. However, recent studies indicated that the dynamics of HSCs differ in vivo as compared to those in transplantation experiments4,5,6,7. Lineage tracing experiments using several barcoding systems revealed that phenotypic murine HSCs are not a unique cell type that contributes to steady-state hematopoiesis, and MPPs, which display limited self-renewal activity upon transplantation settings, continuously supply mature blood cells4,5,8. In contrast, the contribution of HSCs to mature cells is enhanced after bone marrow injury4. This may be attributed to drastic alterations in the microenvironment following bone marrow ablation, including bone marrow transplantation. Although applying lineage tracing of murine cells to human cells is difficult, phylogenetic analysis combining single-cell-derived colony isolation and whole genome sequencing revealed a similar property of the hematopoietic system, in which both HSCs and MPPs are responsible for the daily production of mature cells7. Thus, although transplantation is essential for examining murine or human HSC activity, other experimental models are needed to understand the behaviors of HSCs under physiological conditions.

Culturing methods for HSCs have been studied in detail to understand their clinical applications and characteristics. Human HSCs can be expanded in vitro using a combination of cytokines, reconstitution of extracellular matrices, removal of self-renewal antagonists, co-culture with mesenchymal or endothelial cells, addition of albumin or its replacement, transduction of self-renewal transcription factors, and addition of small-molecule compounds9,10. Some of these methods, including addition of small compounds SR111 and UM17112, have been tested in clinical trials with promising results9. Considering the quiescent nature of HSCs in vivo, maintaining HSCs with minimal cell cycling is critical for recapitulating HSC behavior in vitro. Quiescent and proliferating HSCs exhibit differential cell cycle entry13, metabolic status14, and tolerance against multiple stresses15 . The methods used to maintain the quiescence of human HSCs in vitro are limited.

By mimicking the microenvironment of the bone marrow (hypoxic and rich in lipids) and optimizing the concentration of cytokines, human HSCs can be maintained undifferentiated and quiescent under culture. Recapitulating the quiescent nature of HSCs in vitro will improve the understanding of the steady state properties of HSCs and enable experimental manipulation of HSCs.

NOTE: Although the cells should be analyzed after 7 days of culture, the culture duration can be changed.

NOTE: Repopulation activity of cultured cells are validated by transplantation to immunodeficient mice. All procedures must be approved by animal experiment committees or their equivalents.

8. Analysis of the frequency of human-derived cells in the peripheral blood

After 7 days of culturing the purified HSCs, up to 80% of cells displayed marker phenotypes of CD34+CD38- (Figure 4A). The total cell number depended on the cytokine concentration (Figure 4B). Higher concentrations of SCF and TPO induced entry into the cell cycle, proliferation, and differentiation (Figure 4B). The number of phenotypic HSCs characterized by the marker phenotypes of CD34+CD38-CD90+CD45RA- increased in proportion to the SCF or TPO concentrations (Figure 4B), whereas the frequency among the total cells decreased (Figure 4C). Total cell numbers were equal in the 1.5 ng/mL SCF and 4 ng/mL TPO and the 3 ng/mL SCF 3 and 2 ng/mL TPO combinations, suggesting that HSCs are quiescent during minimal cell cycle activation. Given the individual differences, cytokine titration is recommended for each bone marrow donor.

Following 3 months of transplantation of cultured adult bone marrow HSCs, reconstitution can be evaluated as their frequency in the peripheral blood of human CD45+ murine CD45- Ter119- cells. Three lineages including CD19+ B cells, CD13/CD33+ myeloid cells, and CD3+ T cells were reconstituted in NOG mice transplanted with either freshly thawed HSCs or cultured HSCs (Figure 5).

Figure 2.Procedure to evaporate methanol from the lipid solution. A) Nitrogen gas cylinder with a gas regulator. B) Procedure for passing nitrogen gas through the lipid solution dissolved in methanol. C) Lipids adhering to the bottom of the glass tube. Please click here to view a larger version of this figure. 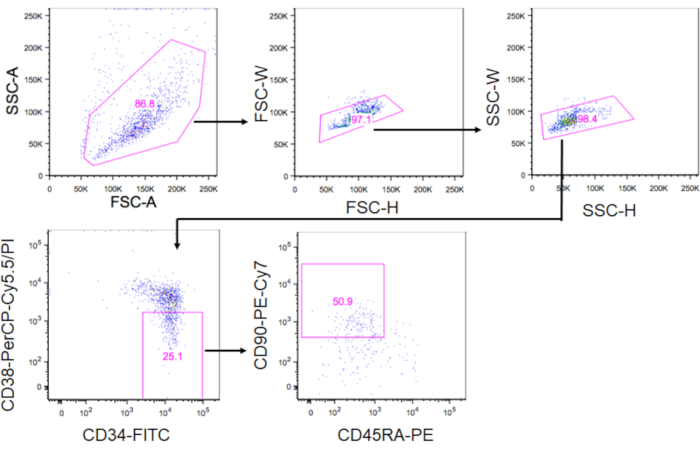 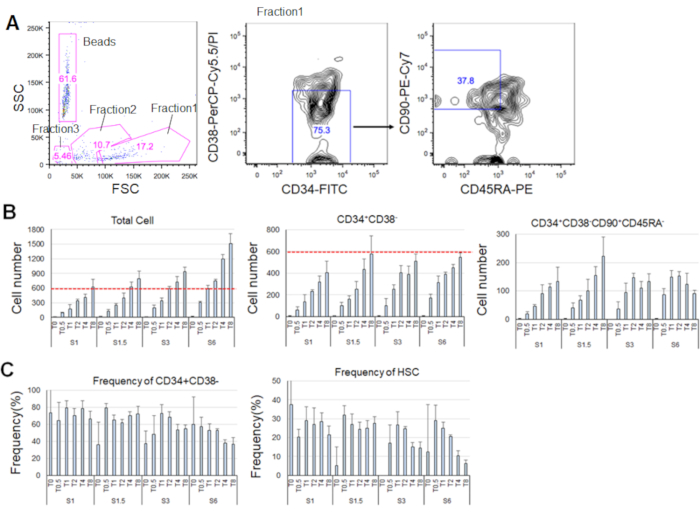 Figure 4. Representative cell numbers after 7 days of culturing. A) Representative fluorescence-activated cell sorting plot after culturing the HSCs in SCF (3 ng/mL) and TPO (2 ng/mL). Fraction 1 was enriched for live cells, fraction 2 was enriched for dead cells, and fraction 3 was enriched for debris. Numbers colored in pink indicate the frequency (%) of the gated fraction. B) Number of all HSCs, CD34+CD38- cells, and CD34+CD38-CD90+CD45RA- cells after culturing 600 HSCs under the indicated cytokine conditions. Red dashed lines indicate the initial number of input cells. S: SCF, T: TPO. Mean ± standard deviation, n = 4. Numbers following S and T indicate the concentration (ng/mL) of each cytokine. C) Frequency of CD34+CD38- and CD34+CD38-CD90+CD45RA- cells under the indicated cytokine conditions. S: SCF, T: TPO. Mean ± standard deviation, n = 4. The error bars for cells cultured in SCF (1 ng/mL) and TPO (0 ng/mL) were omitted because of their high values (37.7 and 47.9, respectively). Please click here to view a larger version of this figure.

Recently, several methods for expanding HSCs with minimal differentiation have been reported18,19,20,21. Although these methods are excellent, HSCs are forced to activate their cell cycles in the presence of high levels of cytokines, which differs from the in vivo situation in which HSCs show minimal cycling. This protocol is useful for maintaining HSCs as quiescent, as observed in vivo, by recapitulating the bone marrow microenvironment.

By culturing human HSCs under low cytokine, lipid-rich, and hypoxic conditions, HSCs showed minimal cycling while maintaining their marker phenotypes. The critical step in this protocol is the preparation of medium containing a high concentration of fatty acids and cholesterol and low cytokine concentrations and culture under hypoxia (Step 1, Step 2, and Step 4). Without cholesterol and/or fatty acids, the maintenance rate of HSCs under low cytokine concentrations decreases22. Culturing of cells under hypoxic conditions is also important, as reported previously23.

The culture conditions were similar to those used for murine HSCs, except for the cytokine concentrations. Murine HSCs survive without TPO, whereas human HSCs require at least 2 ng/mL of TPO with 3 ng/mL of SCF22. As the concentration of TPO is much higher than that in human serum (~100 pg/mL), the conditions used in this protocol may be missing specific factors to support the survival of human HSCs. FLT3 is expressed on human HSCs24. Addition of its ligand FLT3LG slightly decreases the requirement for TPO to maintain HSCs22.

Human HSCs require higher concentrations of cholesterol as compared to murine HSCs, presumably because of the inability to induce the expression of cholesterol-synthesizing enzymes and susceptibility to lipotoxicity under high concentrations (>400 µg/mL) of fatty acids22. Although only the combination of palmitic, oleic, linoleic, and stearic acids was tested, which are abundantly found in the human serum, other combinations of lipids should be evaluated to reduce lipotoxicity and improve the rate of maintaining functional HSCs.

Although the repopulation activity of cultured human HSCs in immunodeficient mice after two weeks of culture has been confirmed22, this culture system does not fully recapitulate the niche functions of HSCs in vivo. The expression of CD45RA has been reported to increase and the repopulation capacity is inferior to that of freshly sorted HSCs22. However, the concentrations of nutrients, such as glucose, amino acid, pyruvate, and insulin, which are added to the medium at supraphysiological levels, can be optimized. Contaminants in BSA may also compromise the maintenance of HSCs18,25. In addition, some cultured cells undergo cell death, whereas others undergo cell division; thus, the maintenance of the total cell number may not indicate the quiescent status of each cell.

Despite these limitations, the culture conditions described in the protocol developed in this study will help advance the research and engineering of HSCs, particularly under near-physiological conditions. Culture conditions that maintain HSCs with minimal differentiation and cycling activity would be suitable for testing biological and chemical compounds specifically acting on HSCs, manipulating HSCs via lentivirus transduction or genome editing without the loss of stemness, and elucidating the initial step of transformation induced by leukemia-associated genes.

The authors declare no conflict of interest associated with this study. 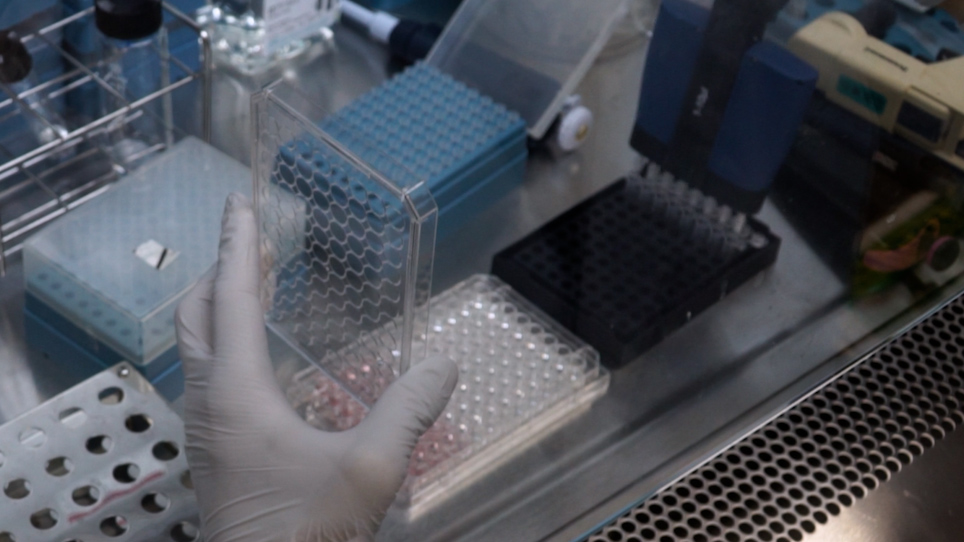