This paper provides technical details for robot-assisted kidney transplantation from a living donor.

This paper describes robot-assisted kidney transplantation (RAKT) from a living donor. The robot is docked between the parted legs of the patient, placed in the supine Trendelenburg position. Kidney allografts are provided by a living donor. Before vascular anastomosis, the kidney allograft is prepared by inserting a double-J stent in the ureter, and the temperature for the anastomosis is lowered by wrapping it in an ice-packed gauze. A 12 mm or 8 mm port for the robotic camera and three 8 mm ports for robotic arms are placed. A peritoneal pouch is created for the kidney allograft by raising the peritoneal flaps on both sides over the psoas muscle before dissecting the iliac vessels and bladder. A 6 cm Pfannenstiel incision is made to insert the kidney into the peritoneal pouch, lateral to the right iliac vessels.

Allografts with multiple vessels usually require vascular reconstruction, which leads to extended cold and warm ischemic times. Despite the technical challenges of RAKT, a European multicenter study reported that RAKT using allografts with multiple vessels is technically feasible and leads to favorable functional results11. Although it is more common to place the kidney allograft in the pelvis medially during vascular anastomosis, according to previous reports4,5,6,7,8,9, the allograft was placed on the peritoneal pouch lateral to the iliac vessels in this protocol. Although it may be safe to put an allograft medially during anastomosis and flip it to the peritoneal pouch, this technique may not be familiar for inexperienced surgeons. Furthermore, it is more convenient to perform vascular anastomosis with the allograft in the peritoneal pouch and renal vessels in the proper position. This paper describes the step-by-step procedures for RAKT without flipping.

This study got approval from the Institutional Review Board of Asan Medical Center (IRB number: 2021-0101).

3. Positioning of the robotic and gel ports ( Figure 3)

4. Intraabdominal dissection and insertion of the kidney allograft (Video 1)

We set up a routine clinical pathway for recipients who have RAKT at our center. Renal Doppler ultrasound is performed one day post-transplant and technetium-99m diethylenetriamine penta-acetic acid renal scan two days post-transplant. For venous thromboembolism prophylaxis, an intermittent pneumatic compression device is applied during the first 24 h after RAKT. Foley catheter is removed on the fourth postoperative day. On the fifth day, a closed-suction drain is removed after confirming no intra-abdominal complication on non-enhanced computerized tomography. A patient is discharged on the sixth postoperative day unless there is a major adverse event.

At our center, RAKT was performed in 21 recipients from August 2020 to April 2021 (Table 1). All patients had RAKT under robotic assistance except for one morbidly obese patient. Owing to the difficulty in visualization, the Pfannenstiel incision was extended up to 15 cm in length to complete the vascular anastomosis and ureteroneocystostomy. There was one case of primary non-function due to renal vein thrombosis in another patient. Graftectomy was performed three days after KT. There was no delayed graft function. The mean cold ischemic time, vascular anastomosis time, rewarming time, and operative time were 129.2 min (55-253 min), 54.4 min (38-69 min), 73.8 min (44-119 min), and 334.8 min (238-422 min), respectively. The mean estimated glomerular filtration rate (eGFR) (the Chronic Kidney Disease Epidemiology classification [CKD-EPI]) one month after RAKT was 74.9 (47.0-101.0) mL/min/m2. 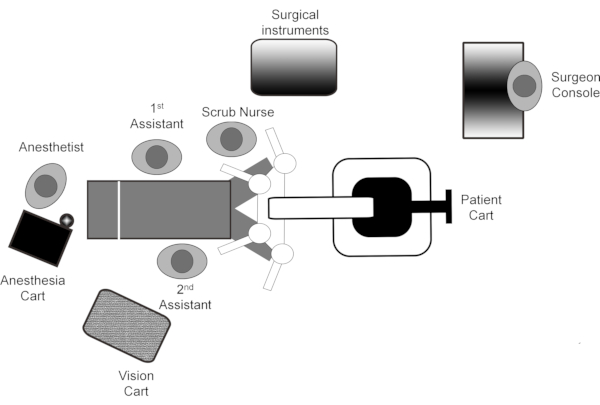 Figure 1: Schematic cross-sectional diagram of the operating room. Please click here to view a larger version of this figure. 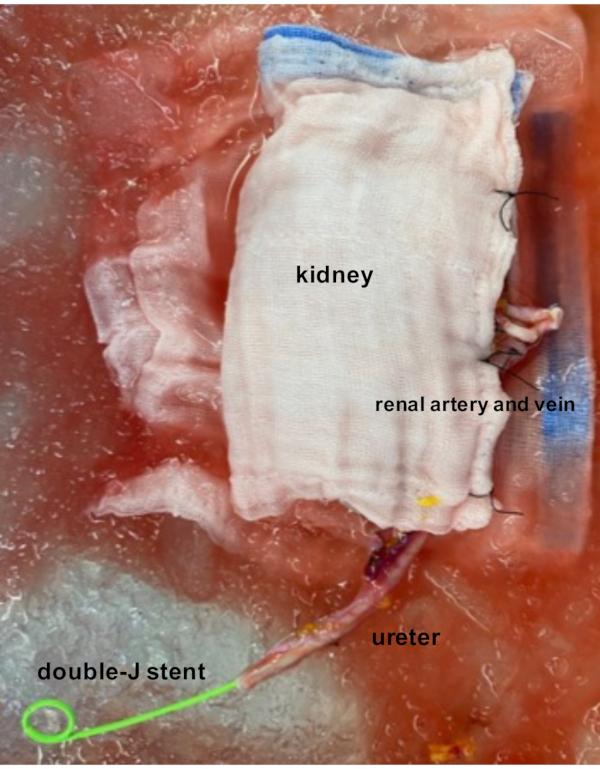 Figure 2: Preparation of the kidney allograft. The allograft is wrapped in an ice-packed gauze, including the insertion of a double-J stent in the ureter. Please click here to view a larger version of this figure. 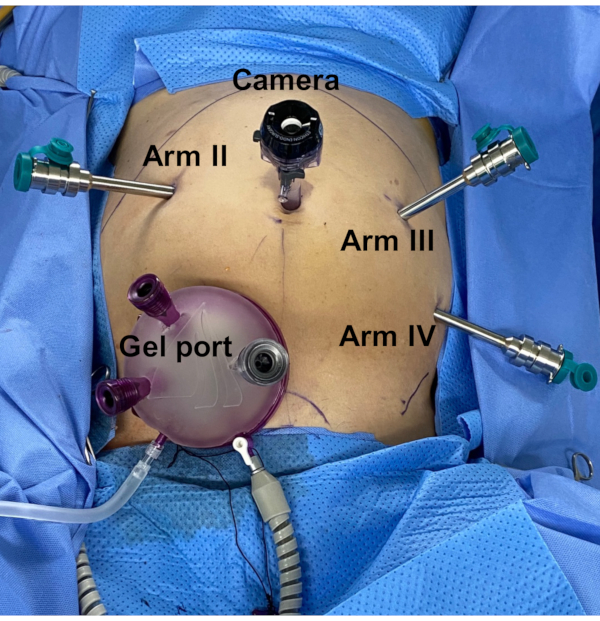 Figure 3: Positioning of the patient and the robotic and laparoscopic ports. Please click here to view a larger version of this figure.

In the early learning curve of a laparoscopic approach, longer cold and warm ischemic times and anastomosis time should be considered negative predictive factors for postoperative creatinine level, graft function, and graft survival12,17. Nowadays, RAKT has replaced laparoscopic kidney transplantation due to several advantages such as the use of articulated robotic instruments, a three-dimensional magnified view, and favorable operator ergonomy. These advantages enable surgeons to perform more reproducible and sophisticated procedures under conditions of up-to-date facilities with sufficient financial and technical support18,19,20.

Like Vignolini et al., we use the Pfannestiel incision, allowing better cosmetic outcomes, easier placement of the allograft directly into the peritoneal pouch, and direct access to the operative field in case of intraoperative urgency21. However, we do not usually use a 12 mm laparoscopic port for the assistants. Instead, two or three ports are made on the gel port for the first and second assistants. In addition, the Pfannestiel incision is made on the right lower abdomen rather than on the midline for easier access to the operative field for the assistants or any emergent situation. Like previous reports, regional hypothermia is adopted for allograft cooling before reperfusion4,22

Of the 21 cases, we performed RAKT using an allograft with double renal arteries in five patients. Compared with allografts with a single renal artery, there was no significant difference in vascular anastomosis time, rewarming time, and operative time. This is consistent with the report by Siena et al., showing that RAKT using grafts with multiple vessels from living donors is technically feasible and achieves favorable perioperative and short-term functional outcomes24. On the other hand, we performed RAKT in three obese patients (≥30 kg/m2 BMI) with favorable results compared to non-overweight recipients in terms of functional outcomes and postoperative complications. Two of them were morbidly obese (≥35 kg/m2 BMI). We agree with previous reports about RAKT in obese patients in that RAKT in obese recipients is safe compared to non-overweight recipients and yields optimal functional outcomes7,8,25. It was also reported that RAKT from deceased donors is feasible, safe, and has favorable outcomes similar to RAKT from living donors21,26. Although we do not have an experience of RAKT from deceased donors, a program will be set up for RAKT from deceased donors.

Not all kidney transplantations can be performed using robot-assisted techniques; however, a considerable number of patients benefits from undergoing RAKT. Particularly, RAKT could improve access to kidney transplantation in morbidly obese patients due to the low rate of surgical complications6,7,8 Recently, it was reported that RAKT with regional hypothermia was associated with a lower incidence of post-transplant complications and improved patient comfort compared with open KT27. Considering the lower risk of surgical complications, favorable cosmetic aspects, and earlier recovery, as well as comparable clinical outcomes with conventional open techniques, the indications for RAKT may be expanded regardless of obesity.

The authors have no conflicts of financial and non-financial interests to disclose.

We thank Dr. Joon Seo Lim from the Scientific Publications Team at Asan Medical Center for his editorial assistance in preparing this manuscript.