Single crystal specimens of the actinide compound uranium ditelluride, UTe2, are of great importance to the study and characterization of its dramatic unconventional superconductivity, believed to entail spin-triplet electron pairing. A variety in the superconducting properties of UTe2 reported in the literature indicates that discrepancies between synthesis methods yield crystals with different superconducting properties, including the absence of superconductivity entirely. This protocol describes a process to synthesize crystals that exhibit superconductivity via chemical vapor transport, which has consistently exhibited a superconducting critical temperature of 1.6 K and a double transition indicative of a multi-component order parameter. This is compared to a second protocol that is used to synthesize crystals via the molten metal flux growth technique, which produces samples that are not bulk superconductors. Differences in the crystal properties are revealed through a comparison of structural, chemical, and electronic property measurements, showing that the most dramatic disparity occurs in the low-temperature electrical resistance of the samples.

At temperatures typically much lower than room temperature, many materials exhibit superconductivity-the fascinating macroscopic quantum state in which the electrical resistance becomes absolutely zero and electrical current can flow without dissipation. In the typical superconducting phase, instead of acting as separate entities, the constituent electrons form Cooper pairs, which are commonly made up of two electrons with opposite spins, in a spin singlet configuration. However, in very rare cases, the Cooper pairs can instead be made up of two electrons with parallel spins, in a spin triplet configuration. Among the few thousand superconductors discovered so far, there are only a few superconductors that have been identified as spin triplet candidates. This rare quantum phenomenon has attracted a lot of research interest because spin triplet superconductors are proposed to be one potential building block for quantum computers1,2, the next generation of computation technology.

Recently, Ran and coworkers reported that UTe2 is a candidate spin triplet superconductor3. This superconductor has many exotic properties indicative of a spin triplet configuration: an extreme, disproportionately large, critical magnetic field required to suppress the superconductivity, a temperature-independent NMR Knight shift3, a spontaneous magnetic moment indicated by the optical Kerr effect4, and a chiral electronic surface state indicated by scanning tunneling spectroscopy5. Moreover, additional superconducting phases are actually induced in high magnetic field6, an example of the unusual phenomenon of reentrant superconductivity.

Although these new results are robust, the superconducting properties of UTe2 depend on the synthesis process used by different groups7,8,9. Crystals of UTe2 synthesized using the chemical vapor transport method superconduct below a critical temperature of 1.6 K. In contrast, those grown using the molten flux method have a greatly suppressed superconducting critical temperature or do not superconduct at all. In anticipation of applications such as quantum computing, reliably obtaining crystals that superconduct is highly desirable. Moreover, investigating why nominally similar crystals do not superconduct is also very helpful for understanding the fundamental superconducting pairing mechanism in UTe2, which, while novel and a topic of intense research, must differ significantly from that of conventional superconductors. For these reasons, the two different synthesis methods are complementary and useful to compare. In this paper, two different methods for synthesis of UTe2 are demonstrated and properties of the single crystals from the two methods are compared.

4. Opening the tubes and harvesting the crystals

Both growth techniques yield crystals of UTe2 having dimensions on the millimeter length scale. Crystals are shiny, with a metallic luster. The crystal morphology is variable, and intergrowths can occur. Generally, chemical vapor transport and flux grown crystals look similar and are not easily distinguishable by visual inspection, as is evident in Figure 1.

The temperature dependence of the electrical resistance is a typical way to characterize metallic materials. Figure 3 compares the temperature dependence of the electric resistance, normalized to the room temperature value, for samples of UTe2 synthesized using chemical vapor transport and flux methods. These data were collected in a commercial refrigerator system using a standard 4-lead configuration. Above 50 K, both samples show a slight increase of the electrical resistance upon cooling, which is atypical of metals. This behavior is consistent with that caused by scattering of conduction electrons off the uranium atomic magnetic moments, known as the single ion Kondo effect. A broad maximum is also seen in both samples, followed by a drop in resistance due to the onset of Kondo coherence.

Figure 1: Photographs of single crystals of UTe2. (A) flux grown and (B-C) CVT grown. The grids are 1 mm. Please click here to view a larger version of this figure.

Figure 2: Powder Xray diffraction data of CVT grown UTe2. The data shows the good quality of the sample with no visible peaks from impurities. Please click here to view a larger version of this figure. 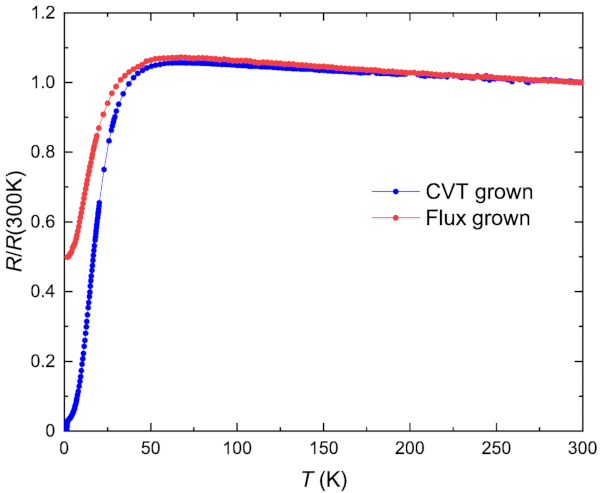 Figure 3: Normalized electrical resistance data as a function of temperature for both CVT grown and flux grown UTe2. The flux grown sample has a substantially larger residual resistance, which is a signature of increased crystallographic disorder. Please click here to view a larger version of this figure. 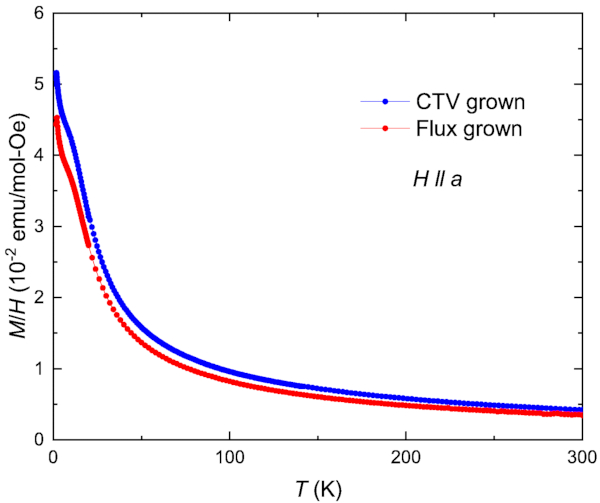 Figure 4: Magnetic susceptibility, or magnetization normalized to applied magnetic field, as a function of temperature for both CVT grown and flux grown UTe2. The samples show similar behavior, including a characteristic kink at approximately 10 K. A magnetic field H = 1000 Oe is applied parallel to the crystallographic a-axis. Please click here to view a larger version of this figure.

To perform chemical vapor transport, it is simplest to utilize a two-zone horizontal furnace, which can generate a temperature gradient by setting the two zones at different temperatures. Successful use of a one-zone furnace to grow superconducting samples has not yet been demonstrated. Starting materials are sealed with a hydrogen-oxygen torch in a fused quartz tube, which must be purged of air. The purging and sealing can be accomplished by connecting the tube to a manifold attached to a dry pump and an argon gas cylinder. Once prepared, this tube is placed in the furnace such that two ends of the tube span the two temperature zones. In the case of UTe2, the end of the tube containing the starting materials is placed at the hot end. The elemental uranium and tellurium react with iodine, travel down the tube as a vapor, and eventually solidify at the cold end the quartz tube in the form of single crystals. Generally, the growth of large crystals is material-dependent and can take several weeks. For UTe2, 7 days is enough to grow crystals with mm dimensions. Following the growth, the tube is removed from the furnace and opened to harvest the crystals.

The molten metal self-flux method requires a simple resistive box furnace with one temperature zone. Uranium dissolves in molten tellurium, and the solubility of UTe2 is dependent on temperature. Starting materials, elemental uranium, and tellurium, are placed in an alumina crucible. On top of this crucible, a second crucible is placed upside down, filled with quartz wool. The two crucibles are sealed in a quartz tube, which is put in a box furnace. This time, instead of generating a fixed temperature gradient over a distance, the temperature is varied as a function of time, as the furnace is slowly cooled at a fixed rate. At the highest temperature, all the uranium will be dissolved in liquid tellurium, which has a much lower melting temperature than uranium. As the furnace cools, the solubility of UTe2 decreases and UTe2 single crystals precipitate and get larger. At a temperature that is low enough to have generated sufficiently large UTe2 single crystals, but still high enough for the tellurium to remain liquid, the quartz tube is removed from the hot furnace, placed it into a centrifuge and spun, which separates the solid UTe2 from the liquid tellurium before it freezes. After that, the tube is allowed to cool to room temperature, before it is broken to collect the crystals.

Working with depleted uranium is a heavily regulated activity that requires awareness of and compliance with applicable laws. Follow all local applicable hazardous and radioactive materials safety rules, and secure necessary permission to perform this work. These rules vary by jurisdiction and institution and cannot be addressed here. However, some general principles apply that can help with the planning of research. Researchers should be trained to work with radioactive and hazardous materials. Wear necessary personal protective equipment, including gloves. Work methodically and take care to avoid the spread of radioactive material. Discard waste in labeled and approved containers.

The authors declare no competing interests.

This research was supported by the National Institute of Standards and Technology. Portions of the synthesis were supported by Gordon and Betty Moore Foundation's EPiQS Initiative through Grant No. GBMF9071. Portions of the characterization were supported by the US Department of Energy (DOE) award DE-SC0019154. Identification of certain commercial products and company names is not intended to imply recommendation or endorsement by the National Institute of Standards and Technology, nor is it intended to imply that the products or names identified are necessarily the best available for the purpose.