With the growing interest in stem cell therapies, molecular imaging techniques are ideal for monitoring stem cell behavior after transplantation. Luciferase reporter genes have enabled non-invasive, repetitive assessment of cell survival, location, and proliferation in vivo. This video will demonstrate how to track hESC proliferation in a living mouse.

The discovery of human embryonic stem cells (hESCs) has dramatically increased the tools available to medical scientists interested in regenerative medicine. However, direct injection of hESCs, and cells differentiated from hESCs, into living organisms has thus far been hampered by significant cell death, teratoma formation, and host immune rejection. Understanding the in vivo hESC behavior after transplantation requires novel imaging techniques to longitudinally monitor hESC localization, proliferation, and viability. Molecular imaging has given investigators a high-throughput, inexpensive, and sensitive means for tracking in vivo cell proliferation over days, weeks, and even months. This advancement has significantly increased the understanding of the spatio-temporal kinetics of hESC engraftment, proliferation, and teratoma-formation in living subjects.

A major advance in molecular imaging has been the extension of noninvasive reporter gene assays from molecular and cellular biology into in vivo multi-modality imaging platforms. These reporter genes, under control of engineered promoters and enhancers that take advantage of the host cell s transcriptional machinery, are introduced into cells using a variety of vector and non-vector methods. Once in the cell, reporter genes can be transcribed either constitutively or only under specific biological or cellular conditions, depending on the type of promoter used. Transcription and translation of reporter genes into bioactive proteins is then detected with sensitive, noninvasive instrumentation (e.g., CCD cameras) using signal-generating probes such as D-luciferin.

To avoid the need for excitatory light to track stem cells in vivo as is required for fluorescence imaging, bioluminescence reporter gene imaging systems require only an exogenously administered probe to induce light emission. Firefly luciferase, derived from the firefly Photinus pyralis, encodes an enzyme that catalyzes D-luciferin to the optically active metabolite, oxyluciferin. Optical activity can then be monitored with an external CCD camera. Stably transduced cells that carry the reporter construct within their chromosomal DNA will pass the reporter construct DNA to daughter cells, allowing for longitudinal monitoring of hESC survival and proliferation in vivo. Furthermore, because expression of the reporter gene product is required for signal generation, only viable parent and daughter cells will create bioluminescence signal; apoptotic or dead cells will not.

In this video, the specific materials and methods needed for tracking stem cell proliferation and teratoma formation with bioluminescence imaging will be described.

Compared to other modalities such as PET and MRI, bioluminescence has limited spatial resolution and reduced tissue penetration due to the relatively weak energy of emitted photons (2-3 eV); for these reasons it has thus far not been applicable in large animals. However, bioluminescence has the advantage of being low-cost, high-throughput, and non-invasive, making it highly desirable for in vivo stem cell tracking in small animals. Non-bioluminescence reporter genes such as PET and fluorescence constructs may be used in conjunction with luciferase to create a fusion reporter gene that is composed of different domains containing the individual reporter genes. For example, our group uses a fusion construct containing fluc, monomeric red fluorescent protein (mrfp), and herpes simplex virus truncated thymidine kinase (ttk, a PET reporter gene) for multi-modality tracking of stem cell behavior in small animals. Over time, stably integrated reporter genes may be subject to gene silencing by the endogenous chromosomal machinery. A reporter gene's susceptibility to gene silencing is closely related to the choice of promoter driving its expression. For instance, the cytomegalovirus promoter (pCMV) is quickly silenced in hESCs. Our lab has had good success with the human ubiquitin-C promoter (pUbiC) to drive expression of a double fusion construct in multiple hESC cell lines, and have observed minimal signal loss over time.

In conclusion, before hESC-derived cell regeneration becomes clinically relevant, several basic biologic hurdles must be overcome - namely cell death or apoptosis following transplantation of differentiated cells, teratoma formation from undifferentiated cells, and immune rejection by the host organism. These and other challenges highlight the need for tracking hESC engraftment, survival, and proliferation within the recipient organism. The development of molecular imaging techniques such as the firefly luciferase reporter gene and ultra-sensitive CCD cameras has enabled non-invasive, repetitive assessment of cell location, migration, proliferation, and differentiation in vivo. Technologies such as these will help push translation of hESC biology from the lab towards clinical applications.

Thanks to Tim Doyle, PhD and the Stanford Center for In Vivo Imaging for assistance with bioluminescence imaging. Also thanks to Ngan Huang, PhD for sharing her technique on stem cell co-injection with matrix solution. Lastly, thanks to Steve Felt, Ph.D. for assistance with veterinary animal care. 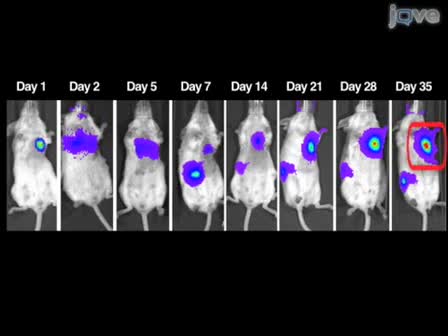