Analysis of biochemicals in single cells is important for understanding cell metabolism, cell cycle, adaptation, disease states, etc. Even the same cell types exhibit heterogeneous biochemical makeup depending on their physiological conditions and interactions with the environment. Conventional methods of mass spectrometry (MS) used for the analysis of biomolecules in single cells rely on extensive sample preparation. Removing the cells from their natural environment and extensive sample processing could lead to changes in the cellular composition. Ambient ionization methods enable the analysis of samples in their native environment and without extensive sample preparation.1 The techniques based on the mid infrared (mid-IR) laser ablation of biological materials at 2.94 μm wavelength utilize the sudden excitation of water that results in phase explosion.2 Ambient ionization techniques based on mid-IR laser radiation, such as laser ablation electrospray ionization (LAESI) and atmospheric pressure infrared matrix-assisted laser desorption ionization (AP IR-MALDI), have successfully demonstrated the ability to directly analyze water-rich tissues and biofluids at atmospheric pressure.3-11 In LAESI the mid-IR laser ablation plume that mostly consists of neutral particulate matter from the sample coalesces with highly charged electrospray droplets to produce ions. Recently, mid-IR ablation of single cells was performed by delivering the mid-IR radiation through an etched fiber. The plume generated from this ablation was postionized by an electrospray enabling the analysis of diverse metabolites in single cells by LAESI-MS.12 This article describes the detailed protocol for single cell analysis using LAESI-MS. The presented video demonstrates the analysis of a single epidermal cell from the skin of an Allium cepa bulb. The schematic of the system is shown in Figure 1. A representative example of single cell ablation and a LAESI mass spectrum from the cell are provided in Figure 2.

Successful ablation of a single cell results in the bursting of the cell wall and the collection of a LAESI mass spectrum. An unsuccessful experiment usually results in no ablation and/or no mass spectrum. For demonstration purposes, we present the results from the LAESI-MS analysis of a single embedded epidermal cell of an A. cepa bulb. Figure 2a shows a representative optical microscopy image after the sampling of a cell. The cell wall is perforated and the extent of perforation is limited by the boundaries with the neighbouring cells. The adjacent cells seem to be intact. Figure 2b shows a representative LAESI mass spectrum produced from the cell. A wide variety of ions are detected from the A. cepa cell and based on their accurate masses, isotope distribution patterns, and, in some cases, tandem mass spectra, they are tentatively assigned to endogenous metabolites. The ions detected from a single cell were similar to the ones observed in the analysis of the same tissue by conventional LAESI-MS of multiple cells.13 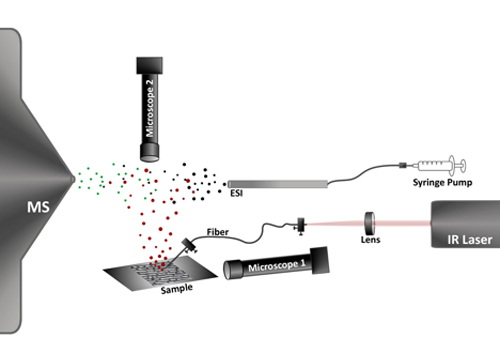 Figure 1. Schematic of single cell analysis by LAESI-MS. A mid-IR laser pulse is coupled into an optical fiber and delivered to the sample placed on glass slide. The sharpened fiber tip focuses the light into the target cell and the deposited energy bursts the cell. The produced ablation plume (red dots) is merged with an electrospray plume (black dots) the droplets coalesce (green dots) resulting in sample specific ion production. These ions are analyzed and detected by the mass spectrometer (MS). Two long distance video microscopes, Microscope 1 and Microscope 2, are utilized to monitor distance between the fiber tip and the cell surface and to select a cell for analysis, respectively. 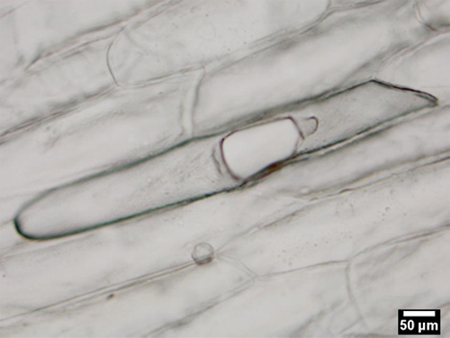 Figure 2a. Ablation mark on a single epidermal cell of an A. cepa bulb. The adjacent cells do not exhibit visible damage and subsequently can be analyzed separately. 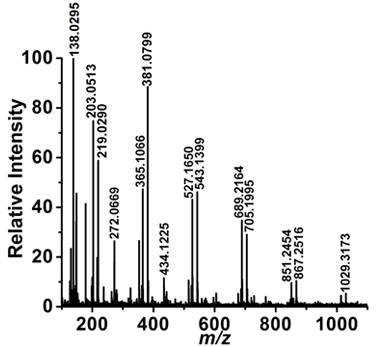 Figure 2b. Mass spectrum corresponding to the ablation of a single A. cepa epidermal cell shows the presence of primary and secondary metabolites.

The water content of the cell cytoplasm and the tensile strength of the cell wall or membrane are critical factors governing the ablation of single cells during LAESI-MS analysis. The laser fluence has to be adjusted to reach the ablation thresholds of the different cell types. The delivered laser fluence depends on the energy of the laser pulse and on the distance between the fiber tip and the cell surface. Minimizing the perturbation of neighboring cells during the single cell analysis is critical. Keeping the laser energy at the ablation threshold limits the effect of analysis on the adjacent cells.

One of the potential applications is using single cells as the natural volumetric pixels (voxels) for chemical imaging by MS. Compared to collecting data on an artificial often rectangular grid, chemical imaging of a tissue one cell at a time is more likely to retain the spatial organization of biochemical interactions between cells.

The authors acknowledge financial support by the following institutions; the National Science Foundation (Grant 0719232), the Department of Energy (Grant DEFG02-01ER15129), the W. M. Keck Foundation (Grant 041904), and the George Washington University Research Enhancement Fund. The authors are grateful for the GeO2-based optical fibers generously supplied by Infrared Fiber Systems (Silver Spring, MD) as well as for the initial discussion on the protocol regarding fiber etching by Mark E. Reeves and Joan A. Hoffmann of the George Washington University. The authors would also like to thank Jessica A. Stolee for her help during the videotaping of the protocol.