A general protocol for the study of invasion of host cells by a bacterial pathogen, focusing on Staphylococcus aureus and human endothelial cells.

Here we will describe how we study the invasion of human endothelial cells by bacterial pathogen Staphylococcus aureus . The general protocol can be applied to the study of cell invasion by virtually any culturable bacterium. The stages at which specific aspects of invasion can be studied, such as the role of actin rearrangement or caveolae, will be highlighted. Host cells are grown in flasks and when ready for use are seeded into 24-well plates containing Thermanox coverslips. Using coverslips allows subsequent removal of the cells from the wells to reduce interference from serum proteins deposited onto the sides of the wells (to which S. aureus would attach). Bacteria are grown to the required density and washed to remove any secreted proteins (e.g. toxins). Coverslips with confluent layers of endothelial cells are transferred to new 24-well plates containing fresh culture medium before the addition of bacteria. Bacteria and cells are then incubated together for the required amount of time in 5% CO2 at 37°C. For S. aureus this is typically between 15-90 minutes. Thermanox coverslips are removed from each well and dip-washed in PBS to remove unattached bacteria. If total associated bacteria (adherent and internalised) are to be quantified, coverslips are then placed in a fresh well containing 0.5% Triton X-100 in PBS. Gentle pipetting leads to complete cell lysis and bacteria are enumerated by serial dilution and plating onto agar. If the number of bacteria that have invaded the cells is needed, coverslips are added to wells containing 500 μl tissue culture medium supplemented with gentamicin and incubation continued for 1 h, which will kill all external bacteria. Coverslips can then be washed, cells lysed and bacteria enumerated by plating onto agar as described above. If the experiment requires direct visualisation, coverslips can be fixed and stained for light, fluorescence or confocal microscopy or prepared for electron microscopy.

Expression of fibronectin binding proteins (FnBPA and FnBPB) on the surface of S. aureus confers the ability to invade endothelial cells. Recent work has redefined the fibronectin-binding domain of FnBPA 3. Wild-type (WT) S. aureus 8325.4 invades endothelial cells with high efficiency, whilst a strain lacking both FnBPA and B (Δfnb ) showed significantly reduced levels of internalisation (Figure 1A). Complementation of the mutant with a plasmid encodingfnb A minus the fibronectin-binding domain (pFnR0) did not promote invasion (Figure 1A). By contrast, complementation of the mutant with a plasmid encoding the entire fnb A gene (pFnBA4) restored invasion to WT levels (Figure 1A).

Experiments were performed four times in duplicate and the mean ± standard deviation is presented. * represent data that are statistically significantly different (p = <0.05) from WT or CTL values. 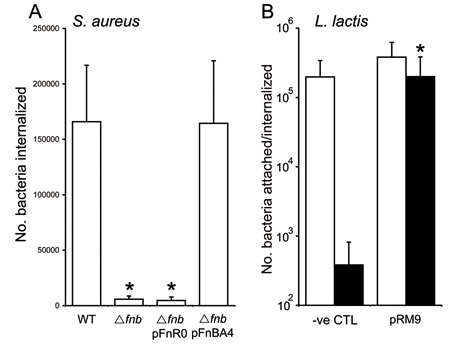 The assay we describe is based on the gentamicin protection assay, which has been used widely to study the invasion of host cells by bacteria. Observations of the inability of gentamicin and other antibiotics to kill intracellular bacteria were utilised in early studies on the invasion of host cells by bacteria 4-8. The use of 24, 48 or even 96-well plates allows the generation of large amounts of quantitative, reproducible data in a short period of time and at relatively low cost. The assay is also attractive because it requires no specialist equipment, it can be tailored to work with various bacteria and cells, and can be used to study the role of both bacterial and host cell processes in invasion 9. Indeed, since the earliest experiments, the gentamicin protection assay has been widely employed to measure host cell invasion by a range of different bacteria or even combinations of bacteria 10,11. Whilst the core principles are the same, many subtle variations in the method have been reported. In this article we have described our version and indicated where modifications may be necessary for other bacteria or host cells. When designing an experiment to measure host cell invasion using this approach there are a number of important points to consider:

Bacterial sensitivity to gentamicin. This may seem obvious, but it is important to ensure that the bacterium being studied is susceptible to gentamicin at the concentration, temperature and over the time duration to be used. In the case of insensitivity, it may be possible to use other antibiotics 5. An alternative approach can be to use lytic enzymes (lysostaphin, mutanolysin, lysozyme) 12.

Incubation and inoculum. When performing this assay for the first time it is important to establish the optimal incubation times and bacterial inoculum to be used. Therefore, initial experiments should examine both adhesion and invasion over time (5 min to up to 6 h). It is also important to assess how invasion is affected by the multiplicity of infection (MOI; number of bacteria per cell). In general it is best to use the fewest number of bacteria possible as this will reduce damage to the cultured cells. Important differences between strains may be missed if extended incubation periods or large inocula are used 9,13.

Cellular damage. It is important to wash bacteria prior to use. However, cellular damage is not restricted to toxin production. Bacterial invasion, induction of apoptosis and disruption of normal cellular functions can all cause cellular damage. This can lead to penetration of gentamicin into the cell, killing internalised bacteria and giving the impression that invasion has not occurred 14.

Incubation conditions. The temperature and composition of the culture medium can have a significant impact on invasion. For example, invasion of HeLa cells by Streptococcus pyogenes is dependent upon the presence of soluble fibronectin, which is typically present in serum 15. Another consideration is bacterial growth in the culture medium during the course of the experiment.

Culture and quantification of intracellular bacteria. Although TX-100 may not kill intracellular bacteria, it may inhibit their growth. As such, it is important to check bacterial replication on solid media in the presence of the detergent. Where affected, it may be possible to use lower concentrations of the detergent or to use an alternative such as saponin. A benefit of the gentamicin protection assay over the crystal violet staining and microscopy assay is that it is less labor intensive, and it allows the detection and differentiation of sub-populations of internalised bacteria. For example, S. aureus can produce either a normal colony type (NCT) or the small colony variant (SCV) 16, which would not be distinguishable by microscopy of individual bacterial cells. A benefit of the crystal violet staining and microscopy assay over the gentamicin protection assay is cell clumping can be accounted for and that intracellular bacteria that enter a 'viable but non-culturable' state will be detected 17.

Examining the role of host cell processes in bacterial invasion. Many studies have employed inhibitors of host cell function such as cytochalasin D, which interferes with actin rearrangement. Such studies can also include antibodies that target cell-surface receptors and siRNA knockdown of specific genes 18. It is vitally important to ensure that these treatments do not affect the viability or attachment of cultured cells or have toxic effects on bacteria.

Because this assay is typically performed in multi-well cell culture plates, it is theoretically possible to adapt it to a high-throughput screening operation, which might involve the examination of libraries of potential cell-function inhibitors, anti-infectives or antibiotics designed to target intracellular bacteria. Alternatively, such an approach could be used to screen mutant libraries to identify genes involved in adhesion, invasion or intracellular survival. In some cases it may be desirable to include shear forces (flow) in the model system, for example when modeling the endothelium, to more closely mimic the in vivo environment. Current advances in the design and manufacture of flow cells and microfluidic cell culture systems provide the possibility of employing the gentamicin protection assay in host-pathogen models that incorporate shear forces.

In summary, the protocol described here is based upon similar approaches used over many years. It is widely applicable to many types of cultured cells and bacterial species and can generate large amounts of data quickly and at relatively little cost.