This article describes a method to obtain a three-dimensional (3D) structure of helically assembled molecules using cryo-electron microscopy. In this protocol, we use HIV-1 capsid assemblies to illustrate the detailed 3D reconstruction procedure for achieving a density map by the iterative helical real-space reconstruction method.

Cryo-electron microscopy (cryo-EM), combined with image processing, is an increasingly powerful tool for structure determination of macromolecular protein complexes and assemblies. In fact, single particle electron microscopy1 and two-dimensional (2D) electron crystallography2 have become relatively routine methodologies and a large number of structures have been solved using these methods. At the same time, image processing and three-dimensional (3D) reconstruction of helical objects has rapidly developed, especially, the iterative helical real-space reconstruction (IHRSR) method3, which uses single particle analysis tools in conjunction with helical symmetry. Many biological entities function in filamentous or helical forms, including actin filaments4, microtubules5, amyloid fibers6, tobacco mosaic viruses7, and bacteria flagella8, and, because a 3D density map of a helical entity can be attained from a single projection image, compared to the many images required for 3D reconstruction of a non-helical object, with the IHRSR method, structural analysis of such flexible and disordered helical assemblies is now attainable.

In this video article, we provide detailed protocols for obtaining a 3D density map of a helical protein assembly (HIV-1 capsid9 is our example), including protocols for cryo-EM specimen preparation, low dose data collection by cryo-EM, indexing of helical diffraction patterns, and image processing and 3D reconstruction using IHRSR. Compared to other techniques, cryo-EM offers optimal specimen preservation under near native conditions. Samples are embedded in a thin layer of vitreous ice, by rapid freezing, and imaged in electron microscopes at liquid nitrogen temperature, under low dose conditions to minimize the radiation damage. Sample images are obtained under near native conditions at the expense of low signal and low contrast in the recorded micrographs. Fortunately, the process of helical reconstruction has largely been automated, with the exception of indexing the helical diffraction pattern. Here, we describe an approach to index helical structure and determine helical symmetries (helical parameters) from digitized micrographs, an essential step for 3D helical reconstruction. Briefly, we obtain an initial 3D density map by applying the IHRSR method. This initial map is then iteratively refined by introducing constraints for the alignment parameters of each segment, thus controlling their degrees of freedom. Further improvement is achieved by correcting for the contrast transfer function (CTF) of the electron microscope (amplitude and phase correction) and by optimizing the helical symmetry of the assembly.

Because HIV-1 capsid protein (CA) assemblies9 are stable only in high salt (1M NaCl) buffer, which contributes strong background noise in cryo-EM images, we use a rapid dilution and back-side blotting method to transiently reduce the salt concentration when preparing the frozen-hydrated EM grid.

A helical object can be indexed by two parameters: the Bessel order, n, and layer line number, l. Each layer line in the Fourier transform, as characterized by (n, l), corresponds to a set of lines on the surface lattice of the helical object denoted by (h, k) indices, using the notation from a 2D lattice. For any (h, k), an (nhk, lhk) layer line is a linear combination of two basic vectors (n10, l10) and ( n01, l01), which are the n and l values of the two principal layer lines (1, 0) and (0, 1). l can be obtained from the layer line height measured along Z axis in the Fourier transform. The value of n can be estimated using the following equation10

where t and u are constants of the helix. For any given helix, there may be exactly u units in exactly (or very closely) t complete turns. 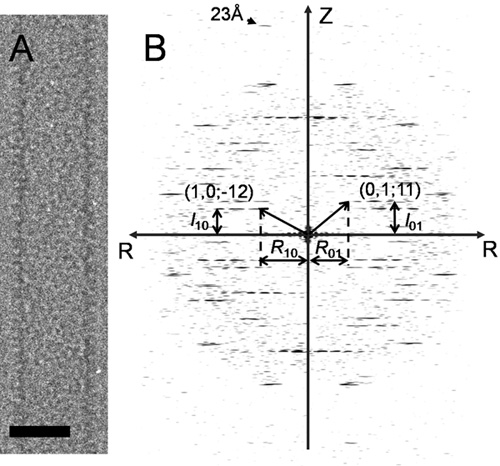 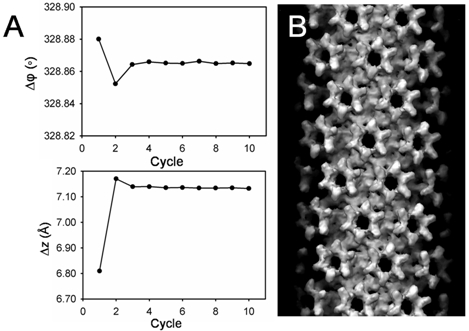 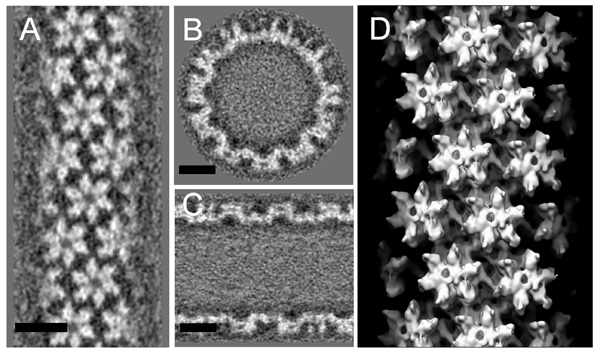 We present a set of protocols to provide a straightforward approach to obtain 3D structures of helical objects. Using the described procedures, we acquired a 3D structure of HIV-1 capsid assembly from a single tube image (176 segments). Higher resolution structures can be achieved by including more image data.

There are several critical points for optimal data collection and analysis: First, during preparation of a cryo-EM specimen, the sample solution should be blotted away, leaving a uniform, thin layer of solution that is slightly thicker than the sample size. There are several different ways to blot the sample. For bacterial cells and tubular specimens, such as HIV-1 CA assembly, blotting from one-side, particularly from the back-side, is most appropriate.

Second, the handedness of the helix needs to be determined, as this cannot be done by helical indexing or reconstruction. A common practice is to use freeze-etching, followed by rotary shadowing18 to determine handedness. Handedness can also be determined post-reconstruction when the resolution of the density map is sufficiently high; the 3D atomic models of individual components should fit well into the density map when a correct handedness is assumed. Otherwise, the opposite handedness should be assumed.

Third, a Wiener filter should be used during image processing, for both phase and amplitude correction, to reduce noise amplification. Since the CTF from a single image always has zero crossings, part of the information in reciprocal space is lost. Therefore, it is necessary to have multiple projection data sets included for 3D reconstruction, each imaged at different defocus values.

The authors would like to thank Dr. Gongpu Zhao and Danxia Ke for technical support. We thank Drs. Edward Egelman and Niko Grigorieff for sharing their image processing software. We also acknowledge the staff who support the Structural Biology cryo-EM facility and Beowulf cluster and grid at the University of Pittsburgh School of Medicine. This work was supported by GM082251 and GM085043.