Morphological scaling relationships capture and describe organismal shape. We present a method to measure morphological scaling relationships across the natural range of body sizes in fully metamorphic insects. Using a simple diet manipulation we increase the distribution of trait sizes, permitting the accurate description of how shape and size co-vary.

The scaling of body parts is a central feature of animal morphology1-7. Within species, morphological traits need to be correctly proportioned to the body for the organism to function; larger individuals typically have larger body parts and smaller individuals generally have smaller body parts, such that overall body shape is maintained across a range of adult body sizes. The requirement for correct proportions means that individuals within species usually exhibit low variation in relative trait size. In contrast, relative trait size can vary dramatically among species and is a primary mechanism by which morphological diversity is produced. Over a century of comparative work has established these intra- and interspecific patterns3,4.

Perhaps the most widely used approach to describe this variation is to calculate the scaling relationship between the size of two morphological traits using the allometric equation y=bxα, where x and y are the size of the two traits, such as organ and body size8,9. This equation describes the within-group (e.g., species, population) scaling relationship between two traits as both vary in size. Log-transformation of this equation produces a simple linear equation, log(y) = log(b) + αlog(x) and log-log plots of the size of different traits among individuals of the same species typically reveal linear scaling with an intercept of log(b) and a slope of α, called the 'allometric coefficient'9,10. Morphological variation among groups is described by differences in scaling relationship intercepts or slopes for a given trait pair. Consequently, variation in the parameters of the allometric equation (b and α) elegantly describes the shape variation captured in the relationship between organ and body size within and among biological groups (see 11,12).

Not all traits scale linearly with each other or with body size (e.g., 13,14) Hence, morphological scaling relationships are most informative when the data are taken from the full range of trait sizes. Here we describe how simple experimental manipulation of diet can be used to produce the full range of body size in insects. This permits an estimation of the full scaling relationship for any given pair of traits, allowing a complete description of how shape covaries with size and a robust comparison of scaling relationship parameters among biological groups. Although we focus on Drosophila, our methodology should be applicable to nearly any fully metamorphic insect.

1. Rearing and manipulation of diet to produce variation in body size and wing size

Rational and Overview. The expression of scaling relationships ultimately hinges on the developmental regulatory processes that produce variation in final organ and body size. These processes are best described from work on fully metamorphic (i.e., holometabolous) insects such as D. melanogaster, where organs grow as undifferentiated 'imaginal discs' within the grub-like larva11,15-17. In Drosophila, final organ and body size are regulated by growth during the larval stages; larvae grow through the first and second larval instar until they reach a minimal viable weight for eclosion (MVWE) towards the beginning of the third larval instar18. Starvation before attainment of MVWE prevents adult eclosion. However, larvae that are starved at MVWE generate viable adults, albeit at a very small size. This is because reduced nutrition during development reduces final body and organ size, not just in flies but in almost all animals19-21. By manipulating food availability after MVWE is attained, but before pupation occurs, it is possible to induce extreme phenotypic plasticity in body size that greatly outweighs other sources of variation (e.g., individual genetic variation).

Rational and Overview. Previous studies indicate that thorax length is a less than ideal proxy for overall body size22. Instead, we use pupal size as a measure of body size. Maximum body size is fixed at the cessation of feeding that precedes pupation. As a result, there is a tight correlation between pupal size and adult body size23.

Rational and Overview. To image wings, we use a 'wing grabber'24, which pulls and holds the wing of a live, anesthetized fly perpendicular to its body. Pressed between two pieces of glass, this allows the wing to be imaged as a two dimensional object.

Our diet manipulation will produce a broad range of body sizes (Figure 1) and trait sizes (Figure 2). Plotting the log transformed traits against each other reveals their pattern of covariation within a given biological group and permits fitting the scaling relationship to the group (Figure 3). Extraction of the scaling relationship parameters that describe how shape scales with body size allows comparison of how shape covaries with size across groups. 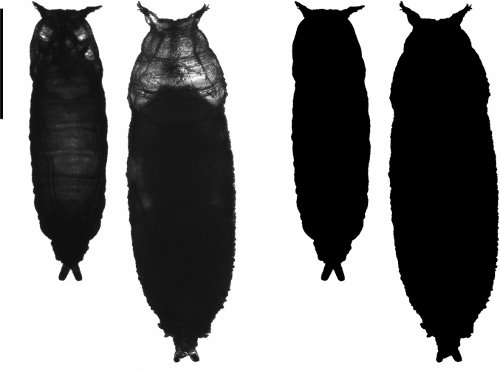 Figure 1. Pupa from extremes of the size distribution produced via diet manipulation after individuals achieve the MVWE. Actual pupal images are shown at left with their corresponding silhouettes for the measurement of pupal size at right. Scale bar is 1mm.

Figure 2. Wings taken from extremes of the body size distribution produced via diet manipulation after individuals achieve the MVWE. Actual wing images are shown on the left with their corresponding silhouettes for the measurement of wing size shown on the right. Scale bar is 1mm. 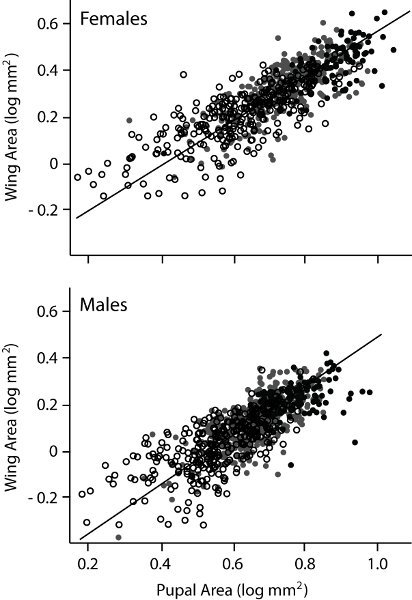 Figure 3. Wing-body size scaling for Drosophila melanogaster by sex. Log-transformed data for individuals of each sex that were fully-fed (dark circles), starved one (grey circles) or two days (open circles) as larvae. Type II regression line is shown for each sex. Between each age cohort, declines in average wing area of ~0.1mm (~7%) and ~0.2mm (~8%) occurs, increasing the total range of phenotypes observed. The regressions reveal that females are slightly hypoallometric for this scaling relationship (slope of 0.96) whereas males are slightly hyperallometric (slope 1.06).

Morphological scaling has been the subject of intense study in evolutionary biology for nearly a century. More recently, the proximate basis of the regulation of growth and scaling has become increasingly important in development, physiology and genetics (e.g., see reviews in 12,15,23-25). Our methodology permits estimation of morphological scaling relationships across the entire range of trait and body sizes. This can be important, as trait size may not scale linearly with body size (e.g., 13,14). However, this may not be apparent if animals are reared only under ideal lab conditions.

Although our protocol was developed explicitly to allow estimation of the wing-body size scaling relationship in Drosophila, it can be used with trait-specific modification to estimate the scaling relationship for any morphological trait in flies. Similarly, the diet manipulation can likely be used to produce the full range of trait and body sizes in other fully metamorphic insects; such applications simply require knowing when the MVWE is achieved and applying the manipulation at that point in ontogeny.