Stem cell based therapies offer significant potential for the field of regenerative medicine. However, much remains to be understood regarding the in vivo kinetics of transplanted cells. A non-invasive method to repetitively monitor transplanted stem cells in vivo would allow investigators to directly monitor stem cell transplants and identify successful or unsuccessful engraftment outcomes.

A wide range of stem cells continues to be investigated for countless applications. This protocol focuses on 3 different stem cell populations: human embryonic kidney 293 (HEK293) cells, human mesenchymal stem cells (hMSC) and induced pluripotent stem (iPS) cells. HEK 293 cells are derived from human embryonic kidney cells grown in culture with sheared adenovirus 5 DNA. These cells are widely used in research because they are easily cultured, grow quickly and are easily transfected. hMSCs are found in adult marrow. These cells can be replicated as undifferentiated cells while maintaining multipotency or the potential to differentiate into a limited number of cell fates. hMSCs can differentiate to lineages of mesenchymal tissues, including osteoblasts, adipocytes, chondrocytes, tendon, muscle, and marrow stroma. iPS cells are genetically reprogrammed adult cells that have been modified to express genes and factors similar to defining properties of embryonic stem cells. These cells are pluripotent meaning they have the capacity to differentiate into all cell lineages 1. Both hMSCs and iPS cells have demonstrated tissue regenerative capacity in-vivo.

Magnetic resonance (MR) imaging together with the use of superparamagnetic iron oxide (SPIO) nanoparticle cell labels have proven effective for in vivo tracking of stem cells due to the near microscopic anatomical resolution, a longer blood half-life that permits longitudinal imaging and the high sensitivity for cell detection provided by MR imaging of SPIO nanoparticles 2-4. In addition, MR imaging with the use of SPIOs is clinically translatable. SPIOs are composed of an iron oxide core with a dextran, carboxydextran or starch surface coat that serves to contain the bioreactive iron core from plasma components. These agents create local magnetic field inhomogeneities that lead to a decreased signal on T2-weighted MR images 5. Unfortunately, SPIOs are no longer being manufactured. Second generation, ultrasmall SPIOs (USPIO), however, offer a viable alternative. Ferumoxytol (FerahemeTM) is one USPIO composed of a non-stoichiometric magnetite core surrounded by a polyglucose sorbitol carboxymethylether coat. The colloidal, particle size of ferumoxytol is 17-30 nm as determined by light scattering. The molecular weight is 750 kDa, and the relaxivity constant at 2T MRI field is 58.609 mM-1 sec-1 strength4. Ferumoxytol was recently FDA-approved as an iron supplement for treatment of iron deficiency in patients with renal failure 6. Our group has applied this agent in an “off label” use for cell labeling applications. Our technique demonstrates efficient labeling of stem cells with ferumoxytol that leads to significant MR signal effects of labeled cells on MR images. This technique may be applied for non-invasive monitoring of stem cell therapies in pre-clinical and clinical settings.

2) Prepare labeling solution. This preparation will label one (1) T75 flask at 80% confluency with a concentration of 400 μg Fe/ml. Refer to Table 1 for instruction for alternate vessels.

Labeled stem cells can subsequently be differentiated into various cell types or intravenously injected for in vivo investigation. 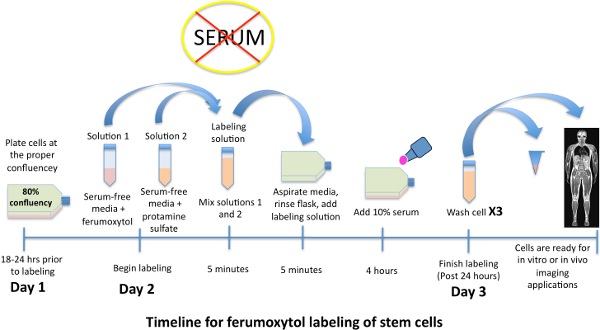 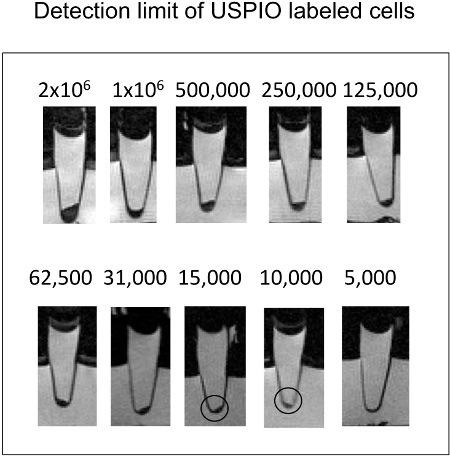 Figure 3. Sagittal cross sections of eppendorf tubes with cells in cell pellets. As little as 10,000 ferumoxytol labeled cells can be detected via T2-w MR imaging. 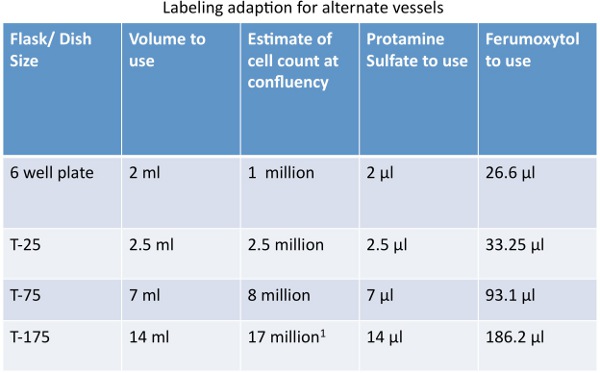 Improving the efficacy of stem cell engraftments is critical for the advancement of regenerative medicine. A non-invasive visualization technique for stem cells in vivo significantly enhances our ability to understand mechanisms that lead to successful engraftment outcomes. Magnetic labeling for MR visualization, such as the procedure we have demonstrated, allows in vivo tracking of stem cells with MR imaging. Magnetically labeled stem cells have previously been transplanted into target tissues and have been visualized up to weeks with MR imaging 7. Long -term labeling and longitudinal imaging is possible due to the lysosomal storage of the iron oxide nanoparticles within cells 8. Challenges, however, do correspond with long term monitoring of iron labeled cells. One challenge associated with longitudinal imaging of iron labeled cells is that as healthy, viable cells proliferate the contrast agent is distributed to daughter cells. Distribution of the contrast agent to daughter cells is uneven and results in a marked dilution effect of the contrast agent over time. A second challenge associated with long term monitoring of iron labeled cells is differentiating between originally labeled, viable cells from resident phagocytes, such as macrophages, that may have phagocytosed released contrast agent from originally labeled, dead cells 4. Our group has identified differences in long-term signal kinetics of viable and apoptotic stem cell transplants, which had been labeled with iron oxide nanoparticles other than ferumoxytol 9-11. Future studies are required to determine whether these principles also apply to ferumoxytol-labeled cell transplants.

Large SPIOs (hydrodynamic diameter > 50 nm) have been applied previously for cell tracking purposes following stem cell labeling via various labeling techniques including simple incubation and transfection with electroporation or transfection agents such as protamine, lipofectin and poly-L-lysine (PLL) 3, 13-16.,Although not always necessary for cell labeling with SPIOs, transfection methods for cell labeling have proven beneficial for facilitating labeling and increasing labeling efficiency 15. SPIOs which have been used for cell labeling, however, are no longer being produced for commercial reasons. Ultrasmall SPIO (USPIO, hydrodynamic diameter < 50 nm) such as ferumoxytol, on the other hand are still being produced but require the aid of a transfection agent to achieve efficient cellular uptake 8. Protamine sulfate is a clinically applicable transfection agent that forms complexes with USPIOs to facilitate phagocytic uptake of the contrast agent by stem cells 17. The combination of FDA-approved protamine sulfate with the FDA-approved USPIO, ferumoxytol, provides the potential for clinical translation of stem cell tracking techniques via off-label use of this agent. Of note, ferumoxytol has demonstrated an excellent safety profile in clinical trials 18. Direct visualization of the transplanted cells via a technique such as the one demonstrated would allow for a better understanding of the factors that promote or impair successful stem cell transplantations and help to identify the most promising techniques for clinical applications. With the use of clinically applicable cell markers and imaging equipment, this imaging technique is in principle, readily accessible to patients who undergo stem cell transplants.

All contributors to this study offer no disclosures.

This work was supported by a grant from the National Institute of Arthritis and Musculoskeletal and Skin Diseases: 3R01AR054458-02S2.