The intraluminal middle cerebral occlusion model in mice is herein presented. The extent of cerebral infarct is evaluated by a neurologic score and cresyl violet staining, an alternative staining to TTC, offering the great advantage to test in parallel many interest markers.

Stroke is the third cause of mortality and the leading cause of disability in the World. Ischemic stroke accounts for approximately 80% of all strokes. However, the thrombolytic tissue plasminogen activator (tPA) is the only treatment of acute ischemic stroke that exists. This led researchers to develop several ischemic stroke models in a variety of species. Two major types of rodent models have been developed: models of global cerebral ischemia or focal cerebral ischemia. To mimic ischemic stroke in patients, in whom approximately 80% thrombotic or embolic strokes occur in the territory of the middle cerebral artery (MCA), the intraluminal middle cerebral artery occlusion (MCAO) model is quite relevant for stroke studies. This model was first developed in rats by Koizumi et al. in 1986 1. Because of the ease of genetic manipulation in mice, these models have also been developed in this species 2-3.

Herein, we present the transient MCA occlusion procedure in C57/Bl6 mice. Previous studies have reported that physical properties of the occluder such as tip diameter, length, shape, and flexibility are critical for the reproducibility of the infarct volume 4. Herein, a commercial silicon coated monofilaments (Doccol Corporation) have been used. Another great advantage is that this monofilament reduces the risk to induce subarachnoid hemorrhages. Using the Zeiss stereo-microscope Stemi 2000, the silicon coated monofilament was introduced into the internal carotid artery (ICA) via a cut in the external carotid artery (ECA) until the monofilament occludes the base of the MCA. Blood flow was restored 1 hour later by removal of the monofilament to mimic the restoration of blood flow after lysis of a thromboembolic clot in humans. The extent of cerebral infarct may be evaluated first by a neurologic score and by the measurement of the infarct volume. Ischemic mice were thus analyzed for their neurologic score at different post-reperfusion times. To evaluate the infarct volume, staining with 2,3,5-triphenyltetrazolium chloride (TTC) was usually performed. Herein, we used cresyl violet staining since it offers the opportunity to test many critical markers by immunohistochemistry. In this video, we report the MCAO procedure; neurological scores and the evaluation of the infarct volume by cresyl violet staining.

Transient middle cerebral artery occlusion (tMCAO) is performed on 2- to 3-month old male C57Bl/6 mice (22-28g). This protocol was approved by the IRCM bioethics committee animal care. Surgical tools were sterilized by autoclaving (121 °C at 15 psi for 60 min). Between each animal, they were sterilized using the hot bead sterilizer (15 sec). Surgery table and other equipment are sanitized using 70% ethanol.

Before reanesthesia, the neuroscore can be checked to evaluate the success of the surgery.

For sham operations, all procedures are identical except that the occluder is not inserted.

Following PBS solution perfusion, brains are quickly frozen in isopentane and stored at -80 °C. Mouse brains may be also perfused with 4% paraformaldehyde (PFA) depending on the planned immunohistochemistry studies. Cryostat-cuts of coronal brain sections (17 μm) are performed. One section out of every 30 is collected on the same slide to have a representative cerebral injury. For volume quantification, 2 slides are stained by cresyl violet staining and an image analysis system (Scion Corporation, Frederick, MD) was used to evaluate the lesion. The injury volume was calculated in arbitrary units (pixels), and expressed as a percentage of the contralateral non-lesioned area for each section. Other slides are kept at -80 °C for immunohistochemistry studies. Alternatively, PFA-fixed brain can be cut at 30-50 μm using vibratome and the infarct volume measured as recommended by Han et al. (2009)6.

The neuroscore evaluation confirms the success of tMCAO post-stroke and determines the efficiency of the tMCAO post-reperfusion. In our hands, all mice subjected to the intraluminal procedure presented at least a mild consistent curling (neuroscore 2) and the neurological deficits are generally stable up to 72 hr. Most mice exhibit a mild consistent curling (neuroscore 2). Mice showing absence of curling are excluded from the study. However, the neuroscore evaluation does not allow us to distinguish between mice with an injured hippocampus and those with an intact hippocampus.

No mortality was observed during the surgery day, suggesting that subarachnoid hemorrhages did not occur. When subarachnoid hemorrhage is identified in a mouse, this one is systematically excluded from analysis. The use of silicon-coated monofilament from Doccol Corporation, which is smoother than home-prepared monofilaments, increases the success of tMCAO and reduces subarachnoid hemorrhages. Mortality between 24 hr and 72 hr is 14% in this model, as generally reported for 60 min of occlusion. The mortality observed is probably due to a large infarct volume in this mouse strain. A strong lesion reproducibility has also been observed (standard deviation is 15%), which is very interesting to study neuroprotection molecules where their effect(s) could be hidden by the variability of the model.

To evaluate the extent of brain injury following tMCAO, we opted to use cresyl violet staining (Figure 2) rather than TTC in order to have a lot of materials to test relevant markers6. The extent of the lesion is relatively consistent. However, we noticed that in some mice, the hippocampus was injured (around 30% of mice). It is interesting to note that cresyl violet staining can be applied up to 1 week later. In the literature, the percentage of brain infarct varies from one study to the other. It depends on the choice of mouse strain, the anesthesia, the thickness of brain sections, the monofilament used, or the staining used 6, 7. 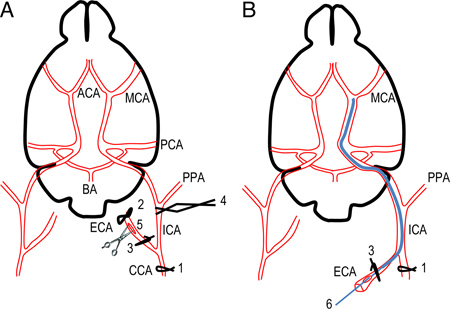 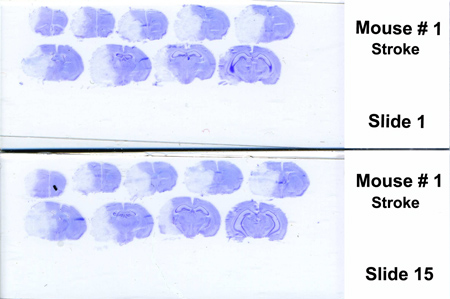 Different stroke models have been developed to mimic stroke consequences in patients. The choice of the stroke model depends on the biological question. The intraluminal MCAO model mimics one of the most common types of ischemic stroke in patients and is less invasive and more consistent than the Tamura model 4,7. It is a really interesting model for neuroprotection, neurorepair and cell death analyses. The success of the intraluminal model depends on many factors such as animal sex, age and weight, temperature, anesthesia and the time of surgery, which have to be controlled. The physical proprieties of the occluder (tip diameter, length, shape and fexibility) are critical for the consistency of the MCAO 4. Herein, we use the 12 mm-long 6-0 monofilament coated with silicon on 9-10 mm from Doccol Corporation. The great advantage of this monofilament is to reduce subarachnoid hemorrhages and because its length covered all the ICA length, residual blood flow, which comes from the anterior and posterior communicating arteries of the Circle of Willis and PPA, is prevented and the variability in the infarct volume decreases (15% of variability in our hands) 8. The suture of CCA also decreases the variability of the infarct volume 9.

The extent of brain injury following tMCAO can be assessed by different ways. Neurological deficits can be measured as previously mentioned. However, it is difficult to have an efficient measure by this way. The extent of the infarct is commonly performed by TTC staining. More recently, magnetic resonance techniques are also used, a particularly interesting technology for neuroprotective treatments. To understand the underlying cellular mechanisms involved in stroke such as neurorepair, cell death or cell proliferation, the study of different markers by immunohistochemistry is critical and very informative. Thus, our protocol of brain section preparations has the great advantage of allowing these analyses, and minimizes the number of mice used. Moreover, Tureyen et al. 10 have reported that there is good correlation between cresyl violet staining and TTC.

Production and Free Access to this article is sponsored by Zeiss, Inc. 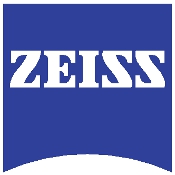