Zebrafish are an excellent model to study muscle function and disease. During early embryogenesis zebrafish begin regular muscle contractions producing rhythmic swimming behavior, which is altered when the muscle is disrupted. Here we describe a touch-evoked response and locomotion assay to examine swimming performance as a measure of muscle function.

Zebrafish muscle development is highly conserved with mammalian systems making them an excellent model to study muscle function and disease. Many myopathies affecting skeletal muscle function can be quickly and easily assessed in zebrafish over the first few days of embryogenesis. By 24 hr post-fertilization (hpf), wildtype zebrafish spontaneously contract their tail muscles and by 48 hpf, zebrafish exhibit controlled swimming behaviors. Reduction in the frequency of, or other alterations in, these movements may indicate a skeletal muscle dysfunction. To analyze swimming behavior and assess muscle performance in early zebrafish development, we utilize both touch-evoked escape response and locomotion assays.

Touch-evoked escape response assays can be used to assess muscle performance during short burst movements resulting from contraction of fast-twitch muscle fibers. In response to an external stimulus, which in this case is a tap on the head, wildtype zebrafish at 2 days post-fertilization (dpf) typically exhibit a powerful burst swim, accompanied by sharp turns. Our method quantifies skeletal muscle function by measuring the maximum acceleration during a burst swimming motion, the acceleration being directly proportional to the force produced by muscle contraction.

In contrast, locomotion assays during early zebrafish larval development are used to assess muscle performance during sustained periods of muscle activity. Using a tracking system to monitor swimming behavior, we obtain an automated calculation of the frequency of activity and distance in 6-day old zebrafish, reflective of their skeletal muscle function. Measurements of swimming performance are valuable for phenotypic assessment of disease models and high-throughput screening of mutations or chemical treatments affecting skeletal muscle function.

Over the past decade zebrafish have been increasingly used to study muscle cell biology and disease. The rapid external development of the zebrafish embryo, coupled with its optical clarity, allows the direct visualization of muscle formation, growth, and function. The process of muscle development is highly conserved in zebrafish and this has allowed the successful modeling of a range of muscle diseases including muscular dystrophies and congenital myopathies1-8. Detailed examination of zebrafish models has not only provided novel insights into the pathobiology of these conditions but also provided a platform for the testing of suitable therapies6,9-13.

The analysis of zebrafish models of muscle diseases relies on reliable and reproducible assays to measure muscle performance. Previous studies have successfully measured the force generating capability of the zebrafish trunk muscle in fish between 3 and 7 dpf by electrically stimulating contraction of an immobilized fish attached to a force transduction system14. This can provide detailed measurements of force but are not ideally suited to higher throughput experiments and there are advantages to measuring muscle performance during swimming. At 2 dpf zebrafish muscle is fully functional and the fish can elicit burst swimming movements in response to stimuli. The touch-evoke escape response assay is used to measure acceleration during a burst swimming motion, which can be used as a measure of contractile force.

One of the most utilized measures of muscle function in myopathy patients is the 6 min walk test, which records the total distance walked on a hard flat surface15,16. We have applied a comparable test to measure muscle function in 6 dpf zebrafish larvae, whereby we monitor the total distance swum, and the total number of movements made by each larva over a 10 min period. This is performed using an automated tracking system, which provides reliable and high-throughput measurements of muscle performance. Both muscle tests are highly reproducible and have been used to quantify differences in muscle performance in zebrafish myopathy models8.

Locomotion assays were performed at 6 dpf to determine the activity and distance swum by zebrafish strains as an indication of muscle performance. Following testing, a diagrammatic representation of the swimming movements over the ten-minute testing period was generated, with red and green lines representing periods of slow and fast movement respectively and black lines representing periods of inactivity (Figure 2). Individual wildtype zebrafish show high activity with relatively no periods of inactivity as opposed to Tg(ACTA1D286G-eGFP) fish, which are less active over the testing period (Figure 2B).

Figure 1: Quantification of touch-evoke response assay for 2 dpf zebrafish embryos. (A) Snapshot images of a control zebrafish during touch-evoke assays at 2 dpf. (B) Acceleration profile for the first 0.2 sec of a single Tg(ACTA1D286G-eGFP) (red) and single control (blue) zebrafish following application of the touch stimulus. The maximum acceleration is represented by the dotted lines. (C, D) Quantification of the maximum acceleration (m/sec2) recorded from touch-evoked response assays of (C) Tg(ACTA1D286G-eGFP) zebrafish and (D) dmdpc2-/- mutant fish compared to control zebrafish at 2 dpf. Error bars represent ± SEM for 3 replicate experiments, *p <0.05. Please click here to view a larger version of this figure. 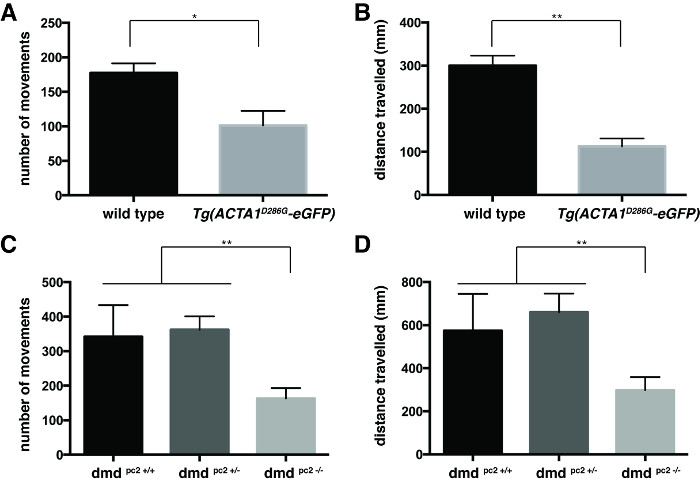 Many different animal models including mice, dogs, zebrafish, flies and worms have contributed towards our understanding of the genetic and molecular basis of muscle diseases, and assisted in the development of therapeutic approaches to combat them. The zebrafish boasts several advantages for the study of muscle disease. The zebrafish provides a genetically manipulable system to assess complex muscle patterning in a suitable physiological environment, which is not possible in in vitro culture systems. Unlike other vertebrate animal models, the large number of fish produced, together with its optical clarity, facilitates rapid, high-throughput in vivo chemical and genetic screening.

Here we describe the development of zebrafish movement assays to provide a high-throughput and automated method to assess muscle performance during zebrafish embryogenesis. For both assays it must be acknowledged that circadian rhythms and external environmental stimuli will significantly affect zebrafish swimming behavior17,18. Repeated testing of the same zebrafish will also lead to habituation causing a decrease in response to the tactile stimulus23. Therefore, in order to achieve reproducible results between experiments each zebrafish embryo should only be tested once, the time of the day and lighting conditions should be standardized, and water temperature needs to be tightly regulated.

Using the touch evoked analysis at 2 dpf we can directly measure the maximum acceleration of a burst swimming action, which is proportional to muscle force. Previous techniques in zebrafish have examined muscle force by tying both ends of the embryos to experimental equipment following which muscle contraction is stimulated using an electric field and the force-generating capability of the muscle14 is measured. Whilst this method measures the force generating capacity of the larval muscle, it does not measure the actual force generated by the larval muscle during swimming. We therefore developed a method to indirectly assess the force generated during the normal larval swimming motion to provide an overall measure of muscle health. The high-speed video system, capable of recording individual zebrafish movements at a frame rate of 1,000 frames/sec can be used to identify small but significant differences in muscle function, which are not directly distinguishable by eye. It will be of interest to see how previously reported changes in electrically stimulated force-generation correlate with changes in swimming performance.

In addition the touch evoked response assays can also be used to assess swimming kinematics, such as the shape and speed of the body wave during the swimming motion24, to give a quantitative measurement of the locomotory behavior.

Due to the spontaneous movement of zebrafish larvae after 3 dpf, we were not able to perform the touch-evoke assays to measure muscle function. Conversely, we measured muscle performance over a longer period by determining the distance swum by zebrafish larvae at 6 dpf. This test, although an indirect measure of muscle function, can be used to identify fish displaying impaired muscle performance8 or neurodegeneration25,26. This test not only provides a measurement analogous to the 6 min walk test but is also suitable for automated high-throughput in vivo drug or mutagenesis screens.

We thank Viewpoint for their kind sponsorship of this manuscript. This work was funded by an Australian National Health and Medical Research Council (NHMRC) Project Grant (APP1010110).