Through inoculation with beads, the described technique enables the stimulation of the mosquito melanization response in the hemolymph circulating system. The amount of melanin covering the beads can be measured after dissection as a measure of the immune response.

The stimulation of immune responses is a common tool in invertebrate studies to examine the efficacy and the mechanisms of immunity. This stimulation is based on the injection of non-pathogenic particles into insects, as the particles will be detected by the immune system and will induce the production of immune effectors. We focus here on the stimulation of the melanization response in the mosquito Anopheles gambiae. The melanization response results in the encapsulation of foreign particles and parasites with a dark layer of melanin. To stimulate this response, mosquitoes are inoculated with beads in the thoracic cavity using microcapillary glass tubes. Then, after 24 hr, the mosquitoes are dissected to retrieve the beads. The degree of melanization of the bead is measured using image analysis software. Beads do not have the pathogenic effects of parasites, or their capacity to evade or suppress the immune response. These injections are a way to measure immune efficacy and the impact of immune stimulations on other life history traits, such as fecundity or longevity. It is not exactly the same as directly studying host-parasite interactions, but it is an interesting tool to study immunity and its evolutionary ecology.

Insects rely on immune responses to protect themselves against parasites and pathogens1-3 that breach through their cuticle or their midgut epithelium4. In mosquitoes, these responses are efficient against bacteria5, viruses6, filarial nematodes7, and malaria parasites1,8,9. In mosquitoes, a key immune response is the encapsulation of foreign particles with melanin10-12. This encapsulation may happen in the midgut or in the hemolymph circulating system10-12. This melanization response is the result of the pro-phenoloxidase cascade10-12, and it can lead to the death of the parasites or to their phagocytosis. In adult mosquitoes, where the number of hemocytes cells is limited, melanization is a humoral response, like against plasmodium parasites or filarial nematodes 7. In some other insects, it is directly the hemocytes cells that gather around the parasite to melanize them7. Besides, melanin is also essential for several other physiological process like egg production and cuticle wounds healing7.

The stimulation of immune responses is used as a tool to study insect immunity in several agricultural and public health model systems13-18. It is used in Anopheles gambiae mosquitoes, the major vector of malaria in Africa, to study host-parasite interactions14-16,19. These techniques are based on the capacity of insects to detect parasites with their pattern recognition receptors (PRR)2. Mosquitoes may also detect other molecules interfering with their biology such as pathogen-associated molecular patterns (PAMPs), or detect their own damaged cells due to the release of collagen and nucleic acids. The mosquito immune cells such as the hemocytes are used for detection20-23. The main immune signaling pathways are Imd, Toll, JAK/STAT24, and ribonucleic acid interference (RNAi)25,26. Both Toll and Imd pathways influence the melanization response and interact with the pro-phenoloxidase cascade10-12.

The standard tool used to stimulate the melanization response is the inoculation of a mosquito with a small bead into the hemolymph of the thoracic cavity. The degree of melanin encapsulation can then be measured19 after retrieving the bead through the dissection of the mosquito. In most studies, only one bead was injected per mosquito15,16,27, but injecting more beads is possible in order to study the limits of the melanization response19. These beads are injected using an injection solution (physiological serum) to limit disturbance of the mosquito physiology and the desiccation of the mosquito15,16,27. A dye is added to this solution to ease bead selection. It is the same for the dissection solution used to retrieve the bead15,16,27.

The advantage of inoculating insects with non-pathogenic stimuli is the ability to focus on the direct effect on the immune response. There are no complicating effects due to parasite pathogenicity28, immunosuppression29-31, or immune evasion31-34. Besides, the consequences of the stimulations on other life history traits, such as longevity or fecundity, can also be studied. Thus, researchers studying evolutionary ecology may require such tools2,35,36. For example, immuno-challenged bumblebees have a shortened life span under starvation. Similar negative effects of immune stimulations and deployments have been observed in different invertebrate models, often resulting in a shorter lifespan or less reproductive success13,27,37. Such studies can be conducted in varying environments2,4,38. Stimulating immunity is also of interest to those focusing directly on immunopathology39,40.

This protocol is based on the inoculation of beads with mosquitoes to stimulate the melanization response and directly measure the amount of melanin. This enables quantitative and qualitative study of the melanization response in different experimental settings. Such a tool can be extended to the stimulation of other immune responses, such as the antibacterial response to heat-killed bacteria41. It can also be conducted in many ecological settings.

1. Saline Solution for Injection and Dissection

4. Bead Selections with the Capillary

Mosquitoes did not all melanize the beads in the same way, as some beads were less covered with melanin than others (Figure 1). Indeed, some beads remained blue because of a lack of melanization, whereas others were completely dark (Figure 1). The melanization value was standardized by linear interpolation to a value between 0 (which corresponded to a blue and unmelanized bead) and 100 (corresponding to a dark and heavily melanized bead) (Figure 2a and 2b). These values indicate the degree of melanization of the beads and thus, the strength of the immune response.

We can compare beads to each other by comparing their melanization values. The melanization response generally follows a Gaussian distribution, which enables classical statistical analyses like ANOVA or Gaussian glm. 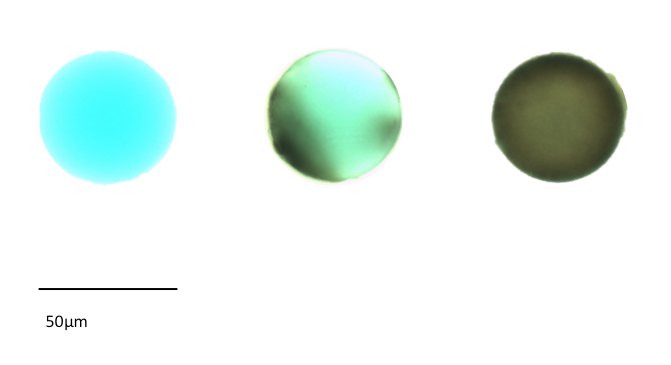 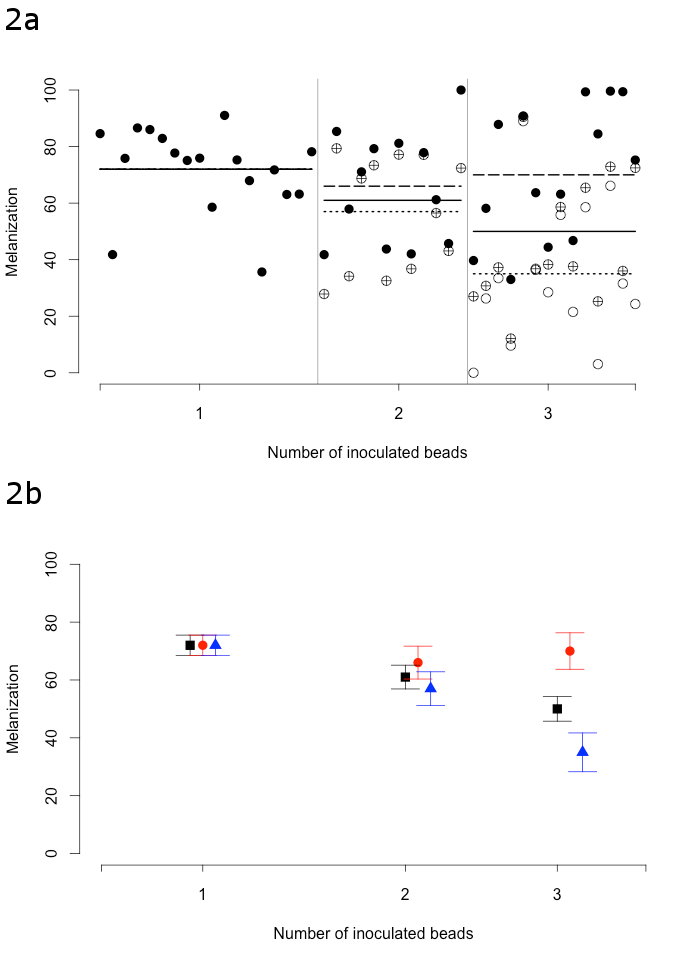 This injection technique is useful to stimulate and study the melanization response in mosquitoes. For example, here we studied the effect of the immune stimuli load.

The critical step in this procedure is to properly inoculate the mosquito. Any excessive damage to the flight muscles or to the mosquito itself may prevent the mosquito from feeding or may kill it before the dissection. A second key step is to keep the mosquitoes on ice long enough to knock them out without killing them. A small container will ease and speed up the process, as it enables closer contact with the ice. Finally, special care is needed during dissection, as tweezers may otherwise break the beads. Beads embedded in mosquito tissue may take more time to be colored by the dissection solution.

This injection technique is invasive for the mosquito. Even if damage and injury can be minimized and controlled, alternate tools may be a better option, depending on the experimental design. It is difficult to stimulate and simultaneously measure several immune responses in the same mosquito. Working on families or groups of mosquitoes is required when looking at the correlations between immune responses28. Besides, beads are only partially similar to the actual presence of parasites in an insect.

First, the immune response is stimulated, and then the resulting phenotypic response, the encapsulation, is measured, but what happens in between is unknown. Coupling injections with physiological or molecular tools10-12 can improve our understanding of this melanization response. To study the underlying mechanisms of the melanization response, the expression of key enzymes or molecules produced during the pro-phenoloxidase cascade can be measured10-12. However, focusing solely on the up- or down-regulation of such molecules, without knowing the actual consequences of the final encapsulation, may lead to an inaccurate evaluation of the melanization process. Therefore, studying encapsulation and the molecular mechanisms together would be highly informative, despite the fact that they are each a valid scientific technique when used separately.

To conclude, this is a technique to study immunity and the evolution of immunity. There is, for example, increasing evidence for a link between insecticide resistance and mosquito susceptibility to malaria parasites. This injection technique could be used in such a context, as well as in field trials. A second work direction would be to combine immune stimulation with gene knockdowns to study immune pathways in detail.