This study describes a protocol that uses 18F-FDG and positron emission tomography/computed tomography (PET/CT) imaging, together with kinetic modelling, to quantify the in vivo, real-time uptake of 18F-FDG into tissues.

This paper describes the use of 18F-FDG and micro-PET/CT imaging to determine in vivo glucose metabolism kinetics in mice (and is transferable to rats). Impaired uptake and metabolism of glucose in multiple organ systems due to insulin resistance is a hallmark of type 2 diabetes. The ability of this technique to extract an image-derived input function from the vena cava using an iterative deconvolution method eliminates the requirement of the collection of arterial blood samples. Fitting of tissue and vena cava time activity curves to a two-tissue, three compartment model permits the estimation of kinetic micro-parameters related to the 18F-FDG uptake from the plasma to the intracellular space, the rate of transport from intracellular space to plasma and the rate of 18F-FDG phosphorylation. This methodology allows for multiple measures of glucose uptake and metabolism kinetics in the context of longitudinal studies and also provides insights into the efficacy of therapeutic interventions.

The purpose of this study was to develop a positron emission tomography/computed tomography (PET/CT) based methodology to quantify the in vivo, real-time uptake of glucose from the blood stream into specific tissues in mice. This was achieved using 18F-labelled fluorodeoxyglucose (FDG) to measure glucose uptake and kinetic modelling to estimate the rates of 18F-FDG uptake from the plasma to the intracellular space, the rate of transport from intracellular space to plasma and the rate of 18F-FDG phosphorylation.

In rodents, 18F-FDG has been used in the pre-clinical assessment of numerous cancer treatments1, studies of tumor progression2 and tumor metabolism3 as well as imaging of brown fat depots4, neuroinflamation5 and brain metabolism6.

Traditional methods used to examine the tissue specific uptake of glucose in mice (and rats) generally involve treatment with 2-deoxyglucose radiolabeled with either 3H or 14C followed by euthanasia, tissue collection and measurement of radioactivity in each tissue7. The use of PET/CT allows for noninvasive determination of glucose uptake and metabolism in multiple organs and regions simultaneously in live animals. Additionally, as euthanasia is not a requirement, this technique is suitable for use in longitudinal studies.

Type 2 diabetes mellitus (T2DM) is characterized by disrupted glucose metabolism and hyperglycemia secondary to reduced tissue responsiveness to insulin (insulin resistance) and the inability of pancreatic -cells to produce adequate amounts of insulin8. Kinetic analysis of glucose uptake and metabolism can provide important insights into the mechanism of action and efficacy of therapeutic interventions as well as allow for advanced monitoring of disease progression.

All procedures described in this study were approved by the Sydney Local Health District and University of Sydney Animal Ethics Committees and followed the NIH Guide for the care and use of laboratory animals, Eighth edition (2011).

NOTE: In this protocol male db/db mice (BKS.Cg-Dock7m +/+ Leprdb/J) were maintained in group housing with ad libitum access to chow and water until 6 weeks of age. At the time of imaging, mice weighed ~ 30 g. All mice used in this protocol had fasting blood glucose levels between 10 and 14 mmol/L.

NOTE: This protocol was implemented on a PET/CT scanner. Acquire PET data first, followed by acquisition of CT data.

We have previously used the db/db mouse model to investigate the impact of increasing plasma apoA-I levels on the kinetics of glucose uptake and metabolism13. In this study we used db/db mice treated with insulin to demonstrate the utility of PET/CT imaging to monitor the uptake of 18F-FDG from the plasma into the gastrocnemius muscle in real time.

Six week old db/db mice were anesthetized and treated with 3 U human insulin/kg, or equivalent volume PBS via subcutaneous injection 30 min before the start of the PET scan. Mice received 10 MBq of 18F-FDG via intravenous injection and uptake measured by PET for 60 min. A CT scan was performed for anatomical reference.

Regions of interest were drawn on the vena cava and gastrocnemius muscle using the CT images (Figure 2). Treatment of db/db mice with insulin increased the 18F-FDG activity in the gastrocnemius ROI over the acquisition time period (Figure 3A). The values obtained for the vena cava ROI were converted from blood to plasma values and were not altered by insulin treatment in insulin treated mice relative to control (Figure 3B).

Time activity curves were loaded into the kinetic modelling tool for calculation of kinetic parameters. Data was initially fitted to a two-tissue compartment method with k4=0 with a Vb (blood volume fraction) value of 2% to calculate dispersion values (80 s and 70 s for PBS and insulin treated mice, respectively). Fitting was then performed using the above dispersion values and a floating Vb value. 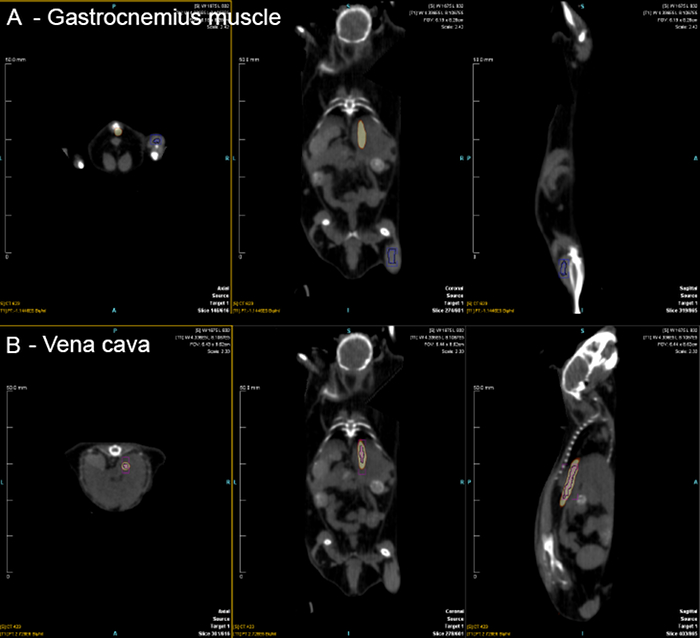 Figure 2: Example of drawing of regions of interest in gastrocnemius muscle (A) and vena cava (B) on a co-registered PET-CT image. Please click here to view a larger version of this figure. 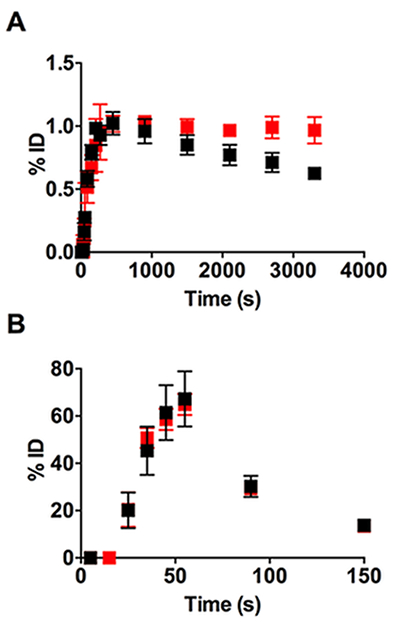 Figure 3: Time-activity curves for regions of interest in gastrocnemius muscle (A) and vena cava (B). Male db/db mice were fasted for 4.5 h prior to receiving 3 U/kg insulin (red) or equivalent volume PBS (black). 18F-FDG (10 MBq) was delivered via intravenous injection and 18F-FDG levels in the gastrocnemius muscle and vena cava determined by PET/CT for 60 min. Values are mean ± SD and expressed as percentage of injected dose, calculated from a full field of view (n=4/group). Modified from Cochran et al. 13 Please click here to view a larger version of this figure.

Table 1: Kinetic analysis of increased 18F-FDG from plasma to gastrocnemius muscle in insulin treated db/db mice. Values are mean ± SD. *p<0.05 vs PBS according to a Mann-Whitney test (n=4/group).

The protocol described here represents a robust, non-invasive methodology to determine the kinetics of glucose uptake from the blood stream into tissue and subsequent metabolism in mice.

The db/db mouse is a is a well-established animal model of type 2 diabetes14 that has been used extensively to examine insulin resistance and relevant interventions. However, previous studies have only quantified endpoint uptake in the heart15 and cardiac and skeletal muscle16.

The use of kinetic analysis to determine physiological rate constants and model the uptake of 18F-FDG from plasma into tissue allows for insights into the impact of antidiabetic treatments on glucose uptake and metabolism. In addition, these experiments can be performed longitudinally to assess, for example, the impact of age or diet on glucose metabolism. This is advantageous over traditional methods that require euthanasia and collection of organs of interest and thus provide information only at a single time point.

Whilst input functions have previously been determined using the whole heart17 as well as heart, liver and a blood samples18 in mice, the protocol described here permits calculation of the input function using a region of interest over the vena cava19. It is also possible to calculate input functions using arterial blood samples during a PET study. However, this is impractical due to the small blood volume of mice.

The use of a plasma input function rather than the 18F-FDGsignal in whole blood is due to the uptake of 18F-FDG into mouse red blood cells20. Furthermore, the red blood cell associated activity represents 18F-FDG inside red cells, and hence is not readily available for transport into other tissue compartments.

In this protocol, it is critical to ensure correct placement of the catheter placed into the tail vein for delivery of the 18F-FDG bolus to the vena cava and throughout the body of the mouse. Warming of the tail to dilate the tail vein significantly improves the ease of inserting this catheter. It is also important to ensure that the PET and CT images are properly coregistered so that the ROIs drawn on the CT image correctly correspond to the PET signal.

There is some debate over the choice of anesthetic agent in studies examining glucose uptake. Whilst isoflurane is a commonly used veterinary anesthetic, the use of sevoflurane may be advantageous in 18F-FDG PET experiments21. In this protocol, it is important to ensure that any potential bias associated with isoflurane anesthesia is minimized by keeping the time between induction of anesthesia and the commencement of imaging constant.

This work was supported by a National Imaging Facility Subsidised Access Grant to BJC, a National Health and Medical Research Council of Australia program grant (482800) to KAR and PJB. The authors would like to thank Andrew Arthur, Hasar Hazme and Marie-Claude Gregoire for support in developing this method.