Lower back pain is the leading cause of disability worldwide1. Lumbar intervertebral disc degeneration associated discogenic pain is considered a significant contributor to lower back pain2. There is an increasing demand for reliable animal models of intervertebral disc disease for broadening the understanding of the degenerative process and for the investigation of potential therapies.

Given the complexity of human intervertebral disc degeneration, a perfect animal model does not exist. However, important considerations in choosing an appropriate animal model to mimic this condition closely have been identified3. Such considerations include the absence of notochordal cells (primitive cells with possible progenitor cell function10 absent from the adult nucleus pulposus in humans, sheep, goats and chondrodystrophic dogs but present in most mammals), similarities in animal and intervertebral disc size relative to humans, comparable biomechanical forces to the clinical condition, mechanistic and ethical considerations3.

Non-human primates meet many of the above criteria. Baboon and macaque models of spontaneous intervertebral disc degeneration have been described11,12,13. Both species spend large amounts of time in erect or semi-erect postures — a distinct advantage relative to other animal models. However, ethical and practical consideration (e.g. expense, housing, delayed onset of spontaneous degeneration) restrict their use in many institutions.

The ovine spine is an established model of intervertebral disc degeneration, with advantages including cellular, biomechanical and anatomical similarities to the human spine10,14,15. Despite the quadrupedal stature of sheep the ovine lumbar intervertebral disc is exposed to similar stresses to the human disc14. The ovine model is also more widely accepted, from an ethical perspective, than non-human primate models. Varied methods have been described to initiate the degenerative process, many of which require direct access to the intervertebral disc. Due to the termination of the spinal cord in the sacral region and ossification of the posterior longitudinal ligament in the ovine lumbar spine, posterior approaches to the intervertebral disc are technically challenging and less commonly used in the sheep16. The traditional access routes to the sheep lumbar spine, i.e. via anterior or anterolateral approaches, require large abdominal incisions, are fraught with risks of hernia, and damage to internal viscera and neurovascular structures16. The use of a relatively small lateral incision away from dependent abdominal areas may decrease such risks17.

We present an ovine model of degenerative lumbar intervertebral disc disease using drill bit injury performed through a minimally invasive lateral approach, and inspired by the work of Zhang et. al18. The goal of this protocol is to enable a reliable lumbar disc injury model that is readily reproducible, produces a consistent injury, and is safe and well tolerated. This approach is well-suited to investigators seeking to induce a milder degree of lumbar intervertebral disc degeneration than that observed with traditional surgical annulotomy (unpublished data) for the investigation of either intervertebral disc degeneration or regenerative therapies. These findings will be described in a forthcoming publication.

NOTE: Pre-operative planning includes the allocation of injury/treatment levels and control levels. Further information regarding level allocation can be found in the discussion. 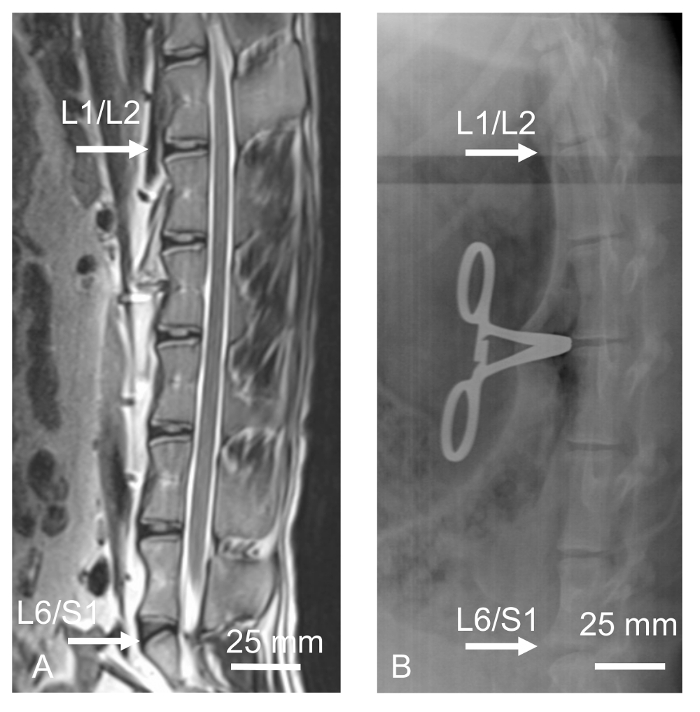 Following the surgery, sheep typically recovered and were independently mobile within 1 h. Sheep were observed closely for one week, and subsequently returned to farmland until necropsy at 8 weeks following intervertebral disc injury. No adverse events occurred. At 8 weeks following disc injury, sheep underwent necropsy, X-ray and MRI of lumbar spines, and processing of discs for histological and biochemical analysis.

Representative post-operative images of the gross morphological appearance, and radiological 9.4T MRI images of injured sheep lumbar intervertebral discs at 8 weeks (56 days) post injury are shown in Figure 2. The gross morphological image demonstrates the drill bit injury tract penetrating the annulus fibrosus and extending into the nucleus pulposus. This is also evident in the 9.4T MRI. Comprehensive description and analysis of the outcome of this approach will be described in a forthcoming publication detailing the model validation study.

This minimally invasive lateral access approach is efficacious and safe with no post-operative herniae, abdominal wound dehiscence or infection observed in this series. Use of the drill bit intervertebral disc injury model with a depth stop provides a reproducible method of inducing a consistent intervertebral disc injury of known dimension (i.e. a 3.5 mm diameter x 12 mm depth injury in this study). In our experience, this method produces a less severe degree of disc degeneration than that observed in conventionally described ovine scalpel blade lumbar intervertebral disc annulotomy models6,22 (unpublished data). This will be described in a forthcoming publication.

In making the initial longitudinal skin incision (step 2.9), the exact length and location of the incision should be modified based on the desired disc levels. More superior disc levels (T12/L1) can be reached by extending the incision to the costovertebral angle, whilst an incision extending to the iliac crest will allow access to the lower lumbar spine (to L5/L6). A 10 cm cut will facilitate access to three to four disc levels, while a smaller focused incision at 5 cm is necessary for access to single-discs. We prefer to perform injury at two levels, usually L2/L3 and L3/4. This enables the adjacent L1/2 and L4/5 intervertebral disc levels to be utilized as non-injured internal controls. Once technically confident, the surgical procedure on one sheep can be completed in less than one hour with minimal blood loss and discomfort18. The critical step and major technical challenge of this technique is the avoidance of endplate injury during drill bit disc injury. Clearly defining the superior and inferior margins of the intervertebral disc at the entry point of the drill-bit, is of the utmost importance. Slowly progressing the drill on low speed into the intervertebral disc, starting approximately perpendicular with slight cranial angulation also minimizes the risk of endplate injury. Lengthening of the skin incision may be required to obtain sufficient angulation of the drill.

The ovine spine was chosen for the intervertebral disc injury model for several reasons. Non-human primates, despite their anatomical and biomechanical similarities to the clinical condition (i.e. large amounts of time in erect and semi-erect postures), present sufficient ethical and practical considerations to prevent their utilization in many institutions. Although a quadruped, the sheep lumbar intervertebral disc is anatomically comparable and exposed to similar biomechanical stresses to human lumbar intervertebral disc16,18. Sheep demonstrate the loss of notochordal cells from the nucleus pulposus in early adulthood, as do humans10,23. Notochordal cells may have progenitor cell function and have been demonstrated to influence the course of disc degeneration through regeneration of the disc matrix. Finally, from a pragmatic perspective, sheep are hardy animals able to tolerate surgery well, are readily available, and present an economically feasible option16,18.

The goat18 is another animal model of lumbar disc degeneration that presents many of the advantages of the sheep model – similar size, economic feasibility, resilience, and absence of notochordal cells in the adult24. Other large animal models present additional challenges - the presence of notochordal cells in the porcine model, and ethical issues that may be associated with canine models. For a comprehensive review of animal models of intervertebral disc degeneration, the reader is directed to a recent review by Daly et. al3.

As the ovine intervertebral disc demonstrates spontaneous loss of notochordal cells and undergo progressive degeneration with age23, it is imperative to ensure consistency of sheep age in experiments. We prefer to use ewes aged two to four years, as at this age, notochordal cells are now absent23. From our own experience, minimal spontaneous degeneration has occurred in sheep aged from two to four years despite the loss of notochordal cells. Furthermore, the sheep vertebral body growth plate closes at approximately 24 months with vertebral body growth having ceased months earlier25, minimizing the risk of any influence on disc regeneration from adjacent growth plate cells. Ewes were preferred because they are less aggressive than their male counterparts facilitating easier animal handling. If male sheep are used, we recommend using wethers.

In a study by Zhang18 using a similar method of drill bit injury, where a drill bit measuring 4.5 mm in diameter was inserted 15 mm deep with manual rotation of 360° to produce disc degeneration in goats, there was no statistically significant difference in radiographic Pfirrmann degenerative score in the injured discs as compared to preoperative images. There was, however, demonstrable histological evidence of mild to moderate disc degeneration26. In contrast in this study, gross morphological and 9.4T MRI analysis revealed evidence of significant degenerative changes in the lumbar intervertebral discs, indicating the significant advantage of this approach.

The application and outcome of this method will be described in a forthcoming publication comparing the drill bit method of intervertebral disc injury to the established annulotomy method in the ovine model. This method may also be used in future for the investigation of regenerative therapies.

The authors declare they have no competing financial interests to disclose.

Dr. Chris Daly is the recipient of the Foundation for Surgery Richard Jepson Research Scholarship. The authors would like to thank Dr. Anne Gibbon, Dr. Dong Zhang and the staff of Monash Animal Services, Monash University for their assistance with animal surgery and care.