We present a mouse tibial distraction osteogenesis model developed using a custom-made distractor. The use of a mouse as an analysis target is advantageous for advancing research.

Distraction osteogenesis (DO) is a surgical procedure that involves skeletal tissue regeneration without cell transplantation. A DO model consists of the following three phases: the latency phase after osteotomy and placement of the external distractor; the distraction phase, wherein the separated bone ends are gradually and continuously distracted; and the consolidation phase. This custom-made distractor used for DO is comprised of two incomplete acrylic resin rings and an expansion screw. The process was initiated by making a mold with silicone impression material and then creating the custom-made distractor. Dental resin was poured into the formwork made of silicone impression material, and it was allowed to polymerize to create the incomplete resin rings required for the custom-made distractor. These rings were fixed with an expansion screw using transparent resin. The custom-made distractor created via this approach was attached to the tibia of mice. The tibia was fixed to the device using one pair of 25 G needles proximally, one pair of 27 G needles distally, and acrylic resin. After a latency period of 5 days, distraction was initiated at a rate of 0.2 mm/12 h. The lengthening was continued for 8 days, resulting in a total gap of 3.2 mm. The mice were sacrificed 4 weeks after distraction. Bone formation in the distraction gap was confirmed using both radiography and histology.

Distraction osteogenesis (DO) is an established treatment method for a variety of skeletal disorders, such as limb length discrepancies, bone defects, and limb deformities1. This unique treatment strategy is based on the "tension-stress principle" proposed by Ilizarov. The method requires several days for latency, several weeks for active distraction, and several months for consolidation until the mature bone is formed2.

The local hypoxic conditions due to blockage of blood flow3,4 and mechanical stimulation5,6 are particularly important in the healing process of DO. Hypoxia-induced angiogenesis carries oxygen, nutrients, soluble factors and cells necessary for tissue repair locally through the blood flow. Mechanical stimulation by extension operation causes biological reactions such as differentiation of mesenchymal stem cells, bone formation, calcification and remodeling. Serial DO treatment allows the formation of not only hard tissues but also soft tissues, including nerves, muscles, blood vessels, and skin tissues, without the need for stem cell transplantation. Therefore, a DO model is considered to be an excellent model for analyzing the regeneration of various tissues.

Rabbits and dogs are the most widely used animals in basic research for DO; however, there are few analysis tools available for these animals. The use of a mouse DO model facilitates a more detailed analysis. It is particularly suitable for experiments using knockout mice. However, when using a mouse as an experimental animal, an extension device should be created. Here, we present a mouse tibial DO model developed using a custom-made distractor created using a dental laboratory tool and technique, which has been used in a previous study.

All experiments were carried out in accordance with protocols approved by the Animal Care and Use Committee of our institution. Sterilize all instruments prior to the procedure.

1. Preparation of a Mold for Creating the Custom-made Distractor

2. Production of the Custom-made Distractor

NOTE: There are various reports on the latency period and distraction rate, but here, representative protocols are shown.

Figures 1A and 1B present incomplete rings (outer diameter, 20 mm; inner diameter, 10 mm; thickness, 5 mm) with paraffin wax. Two wax patterns were embedded in silicone impression material, and a mold for the resin rings (Figure 1C) was formed. Polymerized resin was immediately poured into this mold, and resin rings were obtained (Figure 1D). A custom-made distractor was created by combining two resin rings and an expansion screw (Figure 1E). Figure 2A presents typical radiography findings at 4 weeks after distraction in the model. Newly formed bone was observed at the distraction site. Figure 2B presents the hematoxylin and eosin staining results. A newly formed bone bridge was observed, and the newly formed bone could be easily distinguished from the native bone. There was no intraoperative fracture or postoperative infection in the 5 mice used in this experiment. 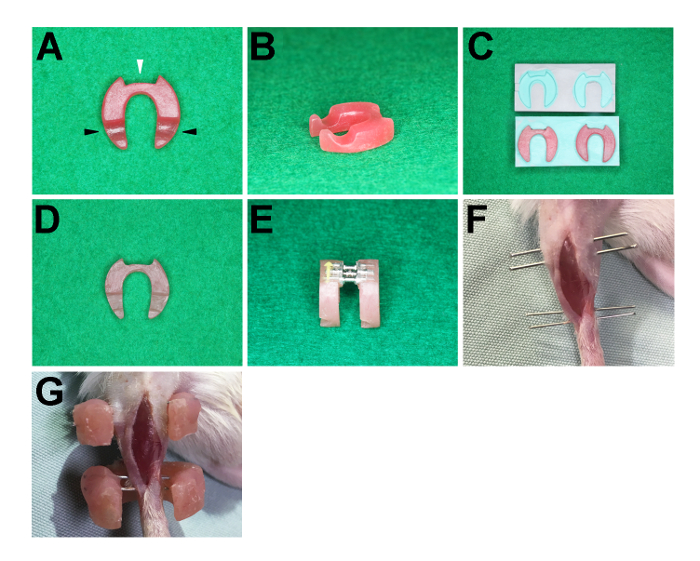 Figure 1: Custom-made distractor. (A, B) The approximate dimensions of the ring are as follows: outer diameter, 20 mm; inner diameter, 10 mm; thickness, 5 mm. The spaces for the expansion screw (white arrowhead) and needle (black arrowhead) are secured. (C) Wax pattern embedded in the silicone impression material. (D) Completed resin rings. (E) The two resin rings and the expansion screw are secured with resin. (F) Four needles are inserted into the proximal and distal metaphysis of the tibia. (G) Distraction device placed in the mouse limb. Please click here to view a larger version of this figure. 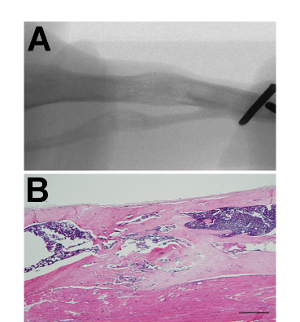 When a large animal is used as an experimental model, a ready-made extension device can be used, and it is easy to obtain good fixation and assess the extension operation itself and the extension amount. However, when a mouse is used as an experimental model, it is necessary to develop some or all of the equipment. Isefuku et al. and Tay et al. made the device and created a mouse model7,8. Carvahjo et al. adopted a method involving fixation of a ready-made expansion device (track distractor: KLS Martin) with a ligature wire9. We could also create a mouse DO model using existing products for extension devices and devising a fixation method. This approach would make it easy to manufacture the extension device, perform extension, and assess the extension amount. Moreover, it is expected that a tibial segmental defect model might be created using the same device. Additionally, the length of the defect can be adjusted in steps of 0.2 mm, and thus, the device is considered to be versatile.

In such an experiment, it is technically difficult to thread the needle through the tibia. In particular, the diameter of the distal part of the tibia is small, and some training is required to pass two needles. If sufficient bone is not noted, it is necessary to check whether good fixation is obtained. In order to obtain good fixation, it might be better to pass the needles at an angle and with a gap as wide as possible between the needles7,8. Additionally, as the rate of healing and the histology during healing would change according to the method of osteotomy, it is necessary to perform the procedure in a certain manner.

The size of the experimental animal can be considered as a limiting factor of this experiment. There are no problems when the mouse is large; however, if it is too small, surgery itself may not be possible. Previously, we used 4-week-old mice and were able to perform experiments without any problems10. With regard to the evaluation period, extension devices could be installed without problems until 42 days after cutting the bone. However, as further observations were not made, additional research is necessary in the future. The occurrence of complications might be an issue when advancing experiments. Fracture during surgery might occur in approximately 1 out of 30 mice. Similarly, postoperative wound infection might occur in approximately 1 out of 30 mice.

In conclusion, we presented a mouse tibial DO model developed using a custom-made distractor.

The authors thank Ms. Makiko Kato for providing encouragement to complete this study. We also thank the Division of Experimental Animals and Medical Research Engineering, Nagoya University Graduate School of Medicine, for the housing of mice.