Here, we present the protocols for utilizing the insect cell and baculovirus protein expression system to produce large quantities of plant secreted proteins for protein crystallization. A baculovirus expression vector has been modified with either GP67 or insect hemolin signal peptide for plant protein secretion expression in insect cells.

It has been a challenge for scientists to express recombinant secretory eukaryotic proteins for structural and biochemical studies. The baculovirus-mediated insect cell expression system is one of the systems used to express recombinant eukaryotic secretory proteins with some post-translational modifications. The secretory proteins need to be routed through the secretory pathways for protein glycosylation, disulfide bonds formation, and other post-translational modifications. To improve the existing insect cell expression of secretory plant proteins, a baculovirus expression vector is modified by the addition of either a GP67 or a hemolin signal peptide sequence between the promoter and multiple-cloning sites. This newly designed modified vector system successfully produced a high yield of soluble recombinant secreted plant receptor proteins of Arabidopsis thaliana. Two of the expressed plant proteins, the extracellular domains of Arabidopsis TDR and PRK3 plasma membrane receptors, were crystallized for X-ray crystallographic studies. The modified vector system is an improved tool that can potentially be used for the expression of recombinant secretory proteins in the animal kingdom as well.

It is imperative for a research laboratory to be capable of producing large quantities of homogeneous recombinant proteins for biochemical and biophysical characterizations, especially for X-ray crystallographic studies. There are many well-established heterologous expression systems such as Escherichia coli, yeast, insect cells, mammalian cells, plant cells, etc. Among them, the baculovirus-mediated insect cell expression system is one of the most commonly used techniques to produce large quantities of structurally folded large-sized recombinant eukaryotic proteins for protein crystallization1.

The expression vectors of the baculovirus expression system are engineered to contain a strong polyhedrin or P10 promoter to produce a high yield of recombinant intracellular proteins2,3. To make a recombinant baculovirus, the gene of interest is cloned into an insect vector containing the polyhedrin (polh) locus of the Autographa californica multi-nucleopolyhedroviral genome. The resulting construct is then sequenced and its correct open reading frame (ORF) is verified. The correct construct is then introduced into the host insect cell through the process of transfection. The gene of interest is inserted into the viral genome by homologous recombination. This event results in the production of the recombinant viral genome, which then replicates to produce recombinant budded virus particles1.

The insect cells that are most commonly used in the expression system are Sf9 and High Five (Hi5) cells. Sf9 cells are a clonal isolate of Sf21, derived from the pupal ovarian cells of Spodoptera frugiperda, and Hi5 cells are a clonal isolate derived from the parental Trichoplusia ni ovarian cell line TN-3684,5. Co-transfections, virus amplification, and plaque assays are conducted on Sf9 cells, while Hi5 cells are typically selected to produce higher quantities of recombinant proteins6. It is worth noting that the Hi5 cells are not suitable for the generation and amplification of virus progenies because of their tendency to produce mutant viruses. Traditionally, a temperature range of 25 - 30 °C is considered to be good for the cultivation of insect cells. However, it has been reported that 27 - 28 °C is the optimal temperature for the insect cell growth and infection7,8.

The A. thaliana Tracheary Element Differentiation Inhibitory Factor Receptor (TDR) and Pollen Receptor Kinase 3 (PRK3) both belong to the plant Leucine-rich Repeat Receptor-like Kinase (LRR-RLK) family of proteins11,12. In order to study the structure and function of this family of plant receptor proteins, as well as to facilitate the structural and biochemical characterization of other plant secreted proteins, the baculovirus-insect cell expression system has been modified to improve protein quality and production yield. The extracellular domains of both TDR and PRK3 have successfully been expressed using two modified expression vectors in the baculovirus-insect cell expression system. Both the extracellular domains of TDR and PRK3 proteins have been crystallized. This article reports the expression and purification of large amounts of recombinant secreted plant proteins with two modified baculovirus expression vectors by incorporating either a GP67 or a hemolin signal sequence between the promoter and multiple cloning sites.

1. Modification of a Baculovirus Expression Vector with the GP67 Signal Peptide for Plant Protein Secretion Expression

The pBac1-GP67 and pBac1-Hem have been successfully utilized to express the extracellular domains of the A. thaliana receptors TDR and PRK3, respectively (Figure 2). After the recombinant proteins were purified by NiNTA using an engineering C-terminal 6-histidine tag, the average protein yield was consistent around 20 mg/L of Hi5 cells. The purity of each protein is close to or higher than 50%, examined with SDS-PAGE and Coomassie staining.

The recombinant proteins of the extracellular domains of TDR and PRK3 were further purified by size exclusion chromatography (Figure 2). The purified protein was concentrated to 5 mg/mL and then subjected to a crystallization screening. The conditions, which yielded preliminary crystals of each protein, were optimized until protein crystals with a size bigger than 20 µm were observed (Figure 3). The crystal structures of both proteins have been reported11,12. 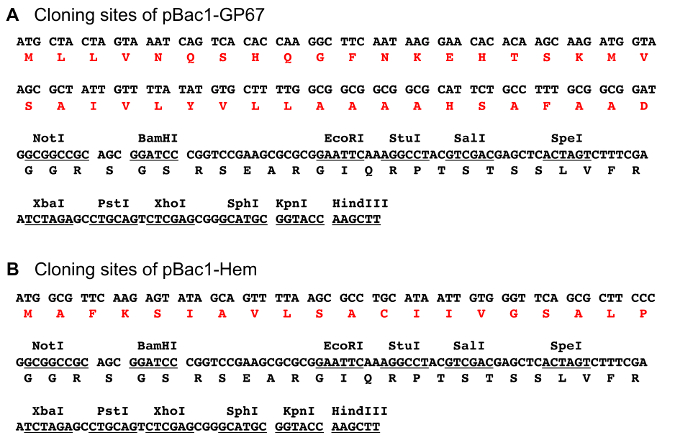 Figure 2: Protein expression with the modified pFastBac1 vectors in the baculovirus-insect cell system. (A) The ectodomain of TDR was expressed in Hi5 insect cells, purified by nickel-affinity and size exclusion chromatography (S), and resolved on SDS-PAGE gel. The nickel resin was washed once with a buffer containing 5 mM imidazole (wash 1), and a second time with 20 mM imidazole (wash 2). (B) This is an SDS-PAGE analysis showing the expression and nickel affinity purification (NiNTA), as well as the size exclusion chromatography of the PRK3 ectodomain. Molecular weight (MW) markers with the corresponding sizes are labeled. The red arrows in each panel denote the expressions and the expected sizes of the recombinant TDR and PRK3 ectodomain proteins. The multi-band natures of the expressed proteins are likely due to heterogeneous glycosylation. Please click here to view a larger version of this figure.

Many secreted eukaryotic proteins, including plant secreted proteins, need complex glycosylation, disulfide formation, and other post-translational modifications during protein folding and secretion21. E. coli systems do not have the cellular machinery to process the complex modifications required for many of the eukaryotic proteins22. Yeast has a relatively more advanced glycosylation system than E. coli23. However, for the expression of the secreted proteins in higher eukaryotic species and plants, the baculovirus-insect cell system presents a significant advantage. Since glycosylation affects protein folding and stability24, many of the secreted recombinant proteins expressed in the E. coli and yeast systems have a low yield and tend to aggregate, presumably due to incorrect protein folding. The baculovirus-insect system has been modified to improve protein glycosylation, which makes it an ideal system for the expression of secreted eukaryotic proteins25. In this study, both the GP67 and the hemolin signal peptides have been successfully used to guide the secretion expression of two plant receptor proteins for protein crystallization. With these studies in mind though, the choice of either signal peptide is a critical step, and it needs more systematic comparative studies with a set of target genes from different organisms.

The idea of using both GP67 and hemolin signal peptides to enhance protein secretion expression was driven by the high expression yields of both genes. However, if the protein secretion and posttranslational modification machinery of the expression host are overloaded with the expressed recombinant proteins, the secreted recombinant proteins may not have adequate modifications, especially glycosylation. Both modified vectors have been used to successfully express numerous plant secretory proteins11,12,26, many of which tend to aggregate, which is probably due to the incorrect or inadequate glycosylation. Therefore, for the expression of those difficult proteins, both strong and weak signal peptide sequences have to be tested and the quality of the expressed recombinant proteins needs to be compared. Keep in mind that a weak signal peptide sequence will lower the overall yield of the protein; however, it may give the secretion machinery of the expression host enough capacity to process the protein secretion and modifications.

In addition to the expression of heterologous secreted proteins in insect cells, the mammalian cell and plant cell expression systems have been used successfully in the overexpression of recombinant mammalian and plant proteins, respectively27,28,29. In comparison to the heterologous systems, the near endogenous expression condition of either the mammalian or the plant secreted proteins will have the almost native modification machineries in the host cells to yield well-folded proteins. The caveat of using the near-native expression system is that the expressed recombinant proteins may interfere with the physiological function of the cells, which may potentially have adverse effects on the final expression yield of the proteins.

This work was supported by the new faculty startup funds from North Carolina State University for Guozhou Xu.