Human primary keratinocytes derived from the human skin are often used as a cellular model to study the biology of the epidermis1,2,3,4. The stratification of the epidermis can be modeled by keratinocyte differentiation, either in a 2D submerged monolayer fashion or 3D air-lift organotypic model2,3,5,6,7. Although 3D models have become increasingly important to assess the epidermal structure and function, 2D differentiation models are still widely used, due to their convenience and the possibility to generate large numbers of cells for analyses.

This protocol describes the procedure for the in vitro differentiation method and molecular analysis of differentiated cells using RNA-seq. It also illustrates characterization of the transcriptome of cells on differentiation day 0 (proliferation stage), day 2, day 4, and day 7 (early, middle, and late differentiation, respectively). It is shown that differentiated keratinocytes display gene expression patterns that largely resemble cells during epidermal stratification. To examine whether this method can be used for studying skin pathology, we applied the same experimental and analysis pipeline to investigate keratinocytes carrying mutations of the transcription factor p63 that are derived from patients with ectrodactyly, ectodermal displasia and cleft lip/palate (EEC) syndrome11,12. This protocol focuses on the in vitro differentiation of keratinocytes as well as subsequent bioinformatic analysis of RNA-seq. Other steps in the complete procedure such as RNA extraction, RNA-seq sample preparation and library construction, are well documented and can be easily followed, especially when using many commonly used commercial kits. Therefore, these steps are only briefly described in the protocol. The data show that this pipeline is suitable for studying molecular events during epidermal differentiation in healthy and diseased keratinocytes.

Skin biopsies were taken from the trunk of healthy volunteers or patients with p63 mutations, to set up the primary keratinocyte culture. All procedures regarding establishing human primary keratinocytes were approved by the ethical committee of the Radboud University Nijmegen Medical Centre (“Commissie Mensgebonden Onderzoek Arnhem-Nijmegen”). Informed consent was obtained.

NOTE: The RNA-seq library preparation is often performed with a commercial kit or under commercial settings. The described protocol is adapted from a commercial kit, KAPA RNA HyperPrep Kit with RiboErase (Illumina), with a brief description of all required steps: rRNA depletion with oligo hybridization to human ribosomal RNAs, RNA fragmentation, first-strand synthesis, second-strand synthesis and A-tailing, and cleanup after each step15. Other library preparation kits can also be used for this purpose. It is recommended to perform this step using a commercially available kit, as the quality of generated cDNA library is often more consistent. 2) The following steps are described for 1x library preparation. If preparing several samples, make master mixes with 10% extra volume.

In PCA analysis, the control cell lines clearly followed a differentiation pattern, as compared to Figure 1B. However, the pattern of gene expression of mutant cells during differentiation stays largely similar to those of proliferating/undifferentiated cells. Among the three mutant lines, differentiating R279 samples moved along PC1 and PC2 to some extent, indicating that its differentiation was less impaired, compared to R204W and R304W.

Genes in cluster 3 were only induced at the end of differentiation in control cells (Figure 2D). Consistent with this, these genes may have a role in the outer most layer of the epidermis, as they have been shown to be responsive to external stimuli and inflammation (Figure 2D). The expression pattern of these genes did not change much in all three mutant cell lines. The visible differences in gene expression patterns between control and mutant cells demonstrate that mutant cells cannot differentiate properly in these in vitro differentiation models. 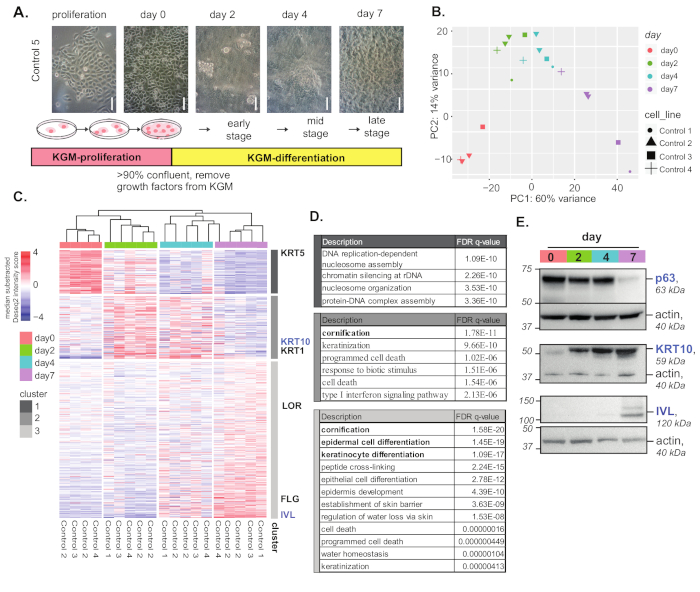 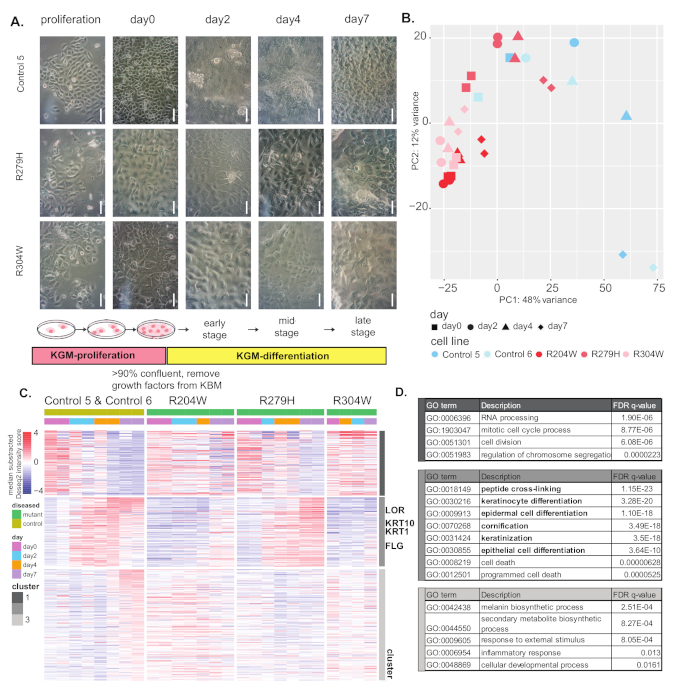 It should be noted that this method has some limitations. As it is based on contact inhibition, the confluency of cell density is required. In our experiments with p63 mutant keratinocytes, a higher initial seeding density has been necessary to ensure cells to reach confluency. In addition, when cells do not grow with the same speed, differentiation sometimes must be induced on different days. These considerations should be taken into account when setting up experiments. In experimental settings where cells need to be induced at the same time, other differentiation methods should be considered, including addition of serum, high concentrations of calcium, and inhibition of epidermal growth factor receptors2,3. Nevertheless, all in vitro differentiation methods have pros and cons, as they probably represent partial differentiation induction signals that are present during in vivo skin development2.

A comprehensive molecular analysis that compares these different methods will be highly informative and can instruct the choice of method most suitable for different studies on biological processes. In addition, validating changes measured at the transcriptomic level is highly advised, for example, via western blotting or proteomic analyses. Furthermore, in vitro data should be used with caution, and conclusions from these models should be validated in vivo, preferably in human skin development.

Basic principles of RNA extraction and RNA-seq library preparation have been well described previously24,25,26,27,28. In this protocol, the RNA extraction and RNA-seq library preparation procedures are based on workflows of commercially available kits. In principle, different methods for RNA extraction should not have a major influence on RNA-seq analyses if the RNA quality is good. In cases where RNA quality is poor (i.e., when RNA is extracted formalin-fixed paraffin-embedded tissues), RNA-seq can still be performed; however, the RNA fragmentation step should be adjusted. The RNA-seq library preparation covers from ribosomal RNA (rRNA) removal to the cDNA library construction for sequencing. The major procedures may be performed by using various kits, or using individual enzymes and homemade buffers29,30,31,32. It should be noted that, if RNA-seq analysis is performed using different basic principles (e.g., either ribosomal RNA depletion or polyA mRNA enrichment by hybridization to polyT oligos), the outcome of RNA-seq analyses may differ. Furthermore, the protocol utilizes ribosomal RNA removal by hybridization of DNA oligos to human, mouse, and rat rRNA. When working with different species, an alternative oligo set should be employed.

Sequencing of the generated library can be performed either on both ends of the fragments (paired end) or at one end of the fragment (single end). In general, paired end sequencing vastly improves mappability and provides more information regarding transcript variants. However, for a relatively simple differential gene analysis as described here, single end sequencing can also provide sufficient information.

For the important step of data analysis, a relatively simple method for quality control of the fastq files is described, followed by mapping reads to the genome. Even though the provided bash code does not have ideal scalability, it has the advantage of transparency. The choice of software, which steps it performs, and version of the genome used during data preprocessing are all nontrivial steps that should be well-documented, which is essential for the repeatability.

For more advanced users, an automated pipeline can be used to perform the steps of fastQ file quality check, adapter trimming and mapping, e.g. the ARMOR snakemake workflow33 or the ‘RNA-seq’ Snakemake workflow from the van Heeringen lab34. However, these completely automated pipelines are less transparent and more difficult to change. When using these tools, it is vital to understand the functions within these automated pipelines. Finally, the protocol includes RNA-seq data analysis with an emphasis on variable gene expression over time. Variable gene expression is preferred over pairwise differential testing when looking at processes with multiple timepoints, such as differentiation. In conclusion, this analysis pipeline introduces relevant tools for bioinformatic analysis of RNAseq data. It contains tools that can thoroughly assess keratinocyte differentiation, both under normal and diseased conditions.