This video presents a case of laparoscopic left liver sectoriectomy perfomed in a 53 year old man suffering from Caroli's disease limited to segment II and III of the liver.

Caroli's disease is defined as a abnormal dilatation of the intra-hepatica bile ducts: Its incidence is extremely low (1 in 1,000,000 population) and in most of the cases the whole liver is interested and liver transplantation is the treatment of choice. In case of dilatation limited to the left or right lobe, liver resection can be performed. For many year the standard approach for liver resection has been a formal laparotomy by means of a large incision of abdomen that is characterized by significant post-operatie morbidity. More recently, minimally invasive, laparoscopic approach has been proposed as possible surgical technique for liver resection both for benign and malignant diseases. The main benefits of the minimally invasive approach is represented by a significant reduction of the surgical trauma that allows a faster recovery a less post-operative complications.

This video shows a case of Caroli s disease occured in a 58 years old male admitted at the gastroenterology department for sudden onset of abdominal pain associated with fever (>38C° ), nausea and shivering. Abdominal ultrasound demonstrated a significant dilatation of intra-hepatic left sited bile ducts with no evidences of gallbladder or common bile duct stones. Such findings were confirmed abdominal high resolution computer tomography. Laparoscopic left sectoriectomy was planned. Five trocars and 30° optic was used, exploration of the abdominal cavity showed no adhesions or evidences of other diseases.

In order to control blood inflow to the liver, vascular clamp was placed on the hepatic pedicle (Pringle s manouvre), Parenchymal division is carried out with a combined use of 5 mm bipolar forceps and 5 mm ultrasonic dissector. A severely dilated left hepatic duct was isolated and divided using a 45mm endoscopic vascular stapler. Liver dissection was continued up to isolation of the main left portal branch that was then divided with a further cartridge of 45 mm vascular stapler.

At his point the left liver remains attached only by the left hepatic vein: division of the triangular ligament was performed using monopolar hook and the hepatic vein isolated and the divided using vascular stapler.

Haemostatis was refined by application of argon beam coagulation and no bleeding was revealed even after removal of the vascular clamp (total Pringle s time 27 minutes). 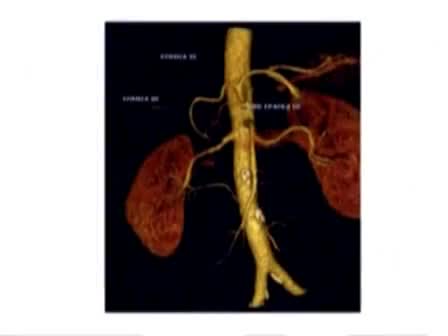